[Solved (Kinda?)] Yet Another "Gaming on Linux" Thread: What's Your Setup?

Got dat thiccboi system. I’m quite neckbeard on this one.

And yeah, I use arch Linux btw

The memory usage is not really accurate because I’ve got a fuckload of static hugepages and containers running.

Pretty much anything, really. Been enjoying warframe lately, but the grind isn’t something I enjoy sinking too much time into, tbh.

Always find myself going back to Prison Architect, Gnomoria and Factorio.

If dxvk or Linux native works well, I use it. otherwise, I have my windows VM. I need the VM for some other programs so no sense in yeeting it.

I was in the same spot too. I’m considering yeeting the passthrough GPU out of my system since I haven’t used it in so long.

Plus, I use the 1080 ti for tensorflow stuff when at work.

It didn’t when I started playin Warframe on Linux. Also been too busy playing to try a reinstall.

Deus Ex games I find to be extremely stuttery, although it’s improved a lot with Valves ACO compiler for us AMD users.

Dying Light average over ~70fps most of the time on native, although I’ve seen people using DXVK and easily double their frame rates. Both perfectly playable, only annoyance is a Arch specific mesa bug that stops the game launching, but a workaround was finally found.

Wolfenstein: The New Order capped at 60fps, perfect except framerates for one part of the game.

Most of the games I’ve been playing recently are through Proton, although I would say half my library has native ports, but at this point Proton is often better than the ports.

Most of the stuff I play is borning.

Civ 6 is sluggish in full screen vs Windows, normally at about 45 fps.

Appreciate the responses everyone!

I recently flashed the BIOS and installed Kubuntu on 100% of the drive. This seems to have helped significantly. I don’t know if sharing the partition with NTFS caused a false “hard disk full” with ESO + Proton, and I’m not sure if that impacted the performance either. Some games still lack optimal performance, such as Deus Ex: Human Revolution. Elder Scrolls: Online, however, is fully functional. There is some brief lag and stuttering at the beginning, but after about five minutes (maybe all the assets have loaded?) the game runs fairly smoothly, with slight lag now and then. The lag is not detrimental to the game, it is noticeable though.

CS:GO works a lot better, but it does still have the long load time and the occasional stutter.

As of now, I am content to run ESO on Kubuntu. That is the only game I play in my spare time. I have a few “shared” games on PS4, like the Deus Ex games and Diablo III. PS4 is running on FreeBSD so I’m still gaming on *nix ayyyy lmao

I will try other games when I have time. I am thoroughly impressed with how ES:O performs, and that is going to keep me on a “single system experience”. When I build my new Thread Ripper 3rd Gen 48 Core Beast workstation in a few months (hopefully), I’ll consider the VFIO solution or just booting from different drives (what I’ve done in the past). I may also consider just casual gaming, as I’ve spent less and less time playing games and more and more time learning the advanced nuances of Linux and Unix systems, mastering the craft of writing software, and experimenting with systems engineering.

However, ES:O scratches an itch that’s been hard to scratch for a long time, so I enjoy it from time to time lol.

Once again, thank you all for your feedback and support. I’m curious to know if maybe it was a UEFI quirk, an NTFS hostile takeover, or, maybe, there was an update to the Ubuntu/Nvidia systems within the time of me trying this while dual booting and trying it with a full/clean install. Either way, it works beyond my expectations for now (thought not 100% for some games

This laptop + eGPU, while perfectly fine and working great, is starting to bug me when I have to reboot lol.

@Goalkeeper lied to me about it

so far i’ve been linux only since late 2012. had a stick of ram die that took out my last installed version of windows. i have not regretted going full time linux on everything since.

i’ve used linux on many machines over the years. my current machine is a hp z220 with an i7-3770, 16gb of patriot g2 1333mhz ram, intel dc3520 960gb ssd, amd radeon 5700 xt 50th ae, evga gq750w psu, and hyperx soundcard usb cable thing. i can run most games without issue (other than low fps) however when gen 3 threadripper gets released i’m upgrading. i understand the threadripper is worse at games than the ryzen cpu’s, but i dont exclusively game on my system.

i have played many games since then that have both windows and linux versions and the linux versions were always more stable. dota 2 and robocraft (dont recommend this game any more) were prime examples of this.

Here is a link to my steam games play times and all those games ran excellent on linux except for saints row 2 and dungeon lords steam edition which those 2 games run like garbage on all computers not just linux ones.

sacred gold tries to play a cut scene at the beginning which just shows a black screen but 3 clicks gets you to the menu without fail and the game runs perfectly after that.

sacred 2 you had to trick the game into installing physx or it would crash on start-up, but once thats installed the game starts and runs perfectly as long as physx is turned off. i turned it on one time and it caused graphical glitches in the game and it crashed when i walked near a bush. whatever i can live without bush physics.

another game that had an issue was path of exile. when i tried playing the game with a radeon 4670 i was limited to directx9ex because it cant do dxvk (directx10/11) and i couldnt play more than 1/2 an hour. it would have issues with the shadows that after a half hour of playing would cause a hard crash. another issue with dx9ex was low fps. once i upgraded to my 5700 xt i am now able to play on the dxvk and i havent had a single issue since.

cs:go i’m having issues with resolution as 5120x1440 makes the menu ui go crazy and unusable but 3840x1080 works just fine, guess i’ll have to switch desktop resolution every time i play it. and i had to use the -nojoy launch option to get it to not crash at start. not a problem for me as i use the superior mouse + keyboard controls anyways.

some non-steam games that i’ve played are minecraft which being java based works perfectly, flarerpg, 0 ad, xonotic, openttd, supertuxkart, and all the emulators like snes9x, dolphin, visualboyadvance, etc…

i’ve done a small bit of streaming before using obs and it was easy to set-up and had no issues.

oh and i’ve played most of the blizzard titles on linux as well. starcraft, starcraft broodwar, starcraft 2, diablo, diablo2, vanilla wow, retail wow up until cata, and the only game i’ve really had an issue with is diablo 2 and the new anti-cheat dll they added the game that makes battlenet crash the game. i’ve found out that if you remove the read option (sudo chmod -r ) it will load but you could get your cd key banned. vanilla wow i did have to use the <SET gxAPI " OpenGL> config mod but once that was done it ran perfectly. before when it was trying to run in directx it had low fps and graphical artifacts but no crashes.

overall it does take a tiny bit more effort to game on linux than windows. the increased security, platform stability, and overall increased customizability options that it has over windows makes it worth it.

if you have any questions feel free to ask and i’ll be happy to attempt to answer them.

I’m currently on Linux mint 19.2 XFCE, kernel 5.0 and the newest stable nvidia drivers.
I pretty much only use Steam and gog, and Lutris to install non-native gog games. Pretty much everything I have tried has worked out of the box, although I am a bit picky on what I will even attempt to run. Games that require separate launchers or include intrusive drm schemes I try to avoid.

Native games like Rise of the tomb raider and dirt 4 run great.
Non-native games on proton that I have tried have all run great, only thing I’ve had to do sometimes is try a different version of proton. I’ve tried Deus ex HR, Insurgency sandstorm and Mordhau to name a few.

On Lutris I’ve run the Witcher 3 and Swat 4 from gog so far, both running perfectly.

I don’t really buy non-native games on gog anymore, except for older ones that I’ll run on older machines.
On steam I mostly look for native titles but I always keep my eye on protondb for games with good compatibility.

I wouldn’t recommend linux as a gaming platform if you care about the mainstream AAA market, but for pretty much everything else it is a far more suitable platform for me. I don’t have to play every game, especially if they don’t at least follow some guidelines for decency with the customer experience. There are a ton of alternatives to almost every game I could not play on linux, if I wanted to.
I’ve decided to vote with my wallet and I accept that some games at least initially may not run perfectly or at all on my platform. At the same time I’ve seen huge leaps in compatibility on linux and I’m very happy to see lots of native support on the platform as well.

ah, ha ! So you are running on an eGPU… I was curious about this type of setup, since I have not known of anyone trying this on Linux. I wonder if there is a bottleneck with the eGPU since those cards run at x4 and not x8 or x16. . .

Thanks for the feedback. i don’t believe anyone who has posted is running an eGPU btw so it’s good to see the variety in setups can you post a screenfetch of your buiild?

Yeah man, my beefy rig died. I’m holding out for TR 3rd Gen (see above) and eGPU + decent laptop was cheaper than upper-tier battlestation that I was going to replace in a little while anyway lol.

I was curious about this type of setup, since I have not known of anyone trying this on Linux

It works really well! Once you figure out the BIOS settings you install nvidia-driver and reboot

Suspend is awful, but that’s been my experience on most operating systems lol.

I’m sure @aLilBabyOtter was contemplating the same setup, which looked interresting as a second system for visiting relatives… 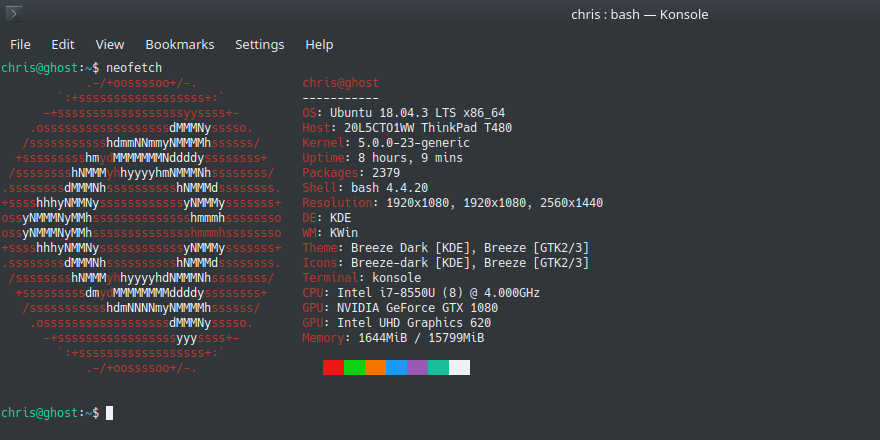 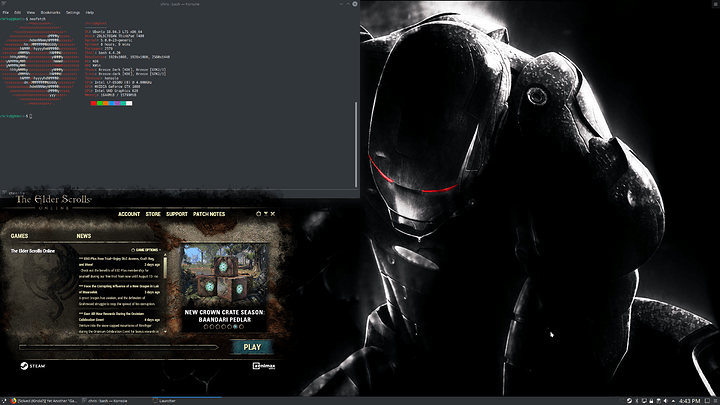