SOLVED How to install java?

hey im trying to play minecraft on linux and i cant seem to get java installed if anyone knows how that will be great :D

It would help to know what distro your on?

If openjdk doesn't play well with Minecraft you will have to install Oracle Java.

This is a pretty decent guide.

No you wont. You dont_have_ to use oracles java, minecraft works perfectly fine with openjdk i run it that way and have never had a problem.

I have seen bit spaz out on some distros so I just added another option if he runs into issues.

so then i just dl minecraft and start it up?

you should be able to run it by double clicking in filemanager or running ./runminecraft

what should the file extension be .bat or something like that?

Nautilus by default won't allow running of scripts but it can be changed in settings in the file browser.

Also you can add an icon if you right click the file and go to properties and click on the place a picture would go.

file extensions don't really matter in linux. Linux will read the file and see the #!/bin/bash and know its a text bash script and run it appropriately. You can give it an extensions for convenience sake for your own recognition.

Open the file with 'OpenJDK 7'

ah i didnt know that, thanks.

That is why I like Linux you can do things many ways.

Right click on Minecraft.jar. Go to properties, then permissions. Tick 'Allow executing as a program' 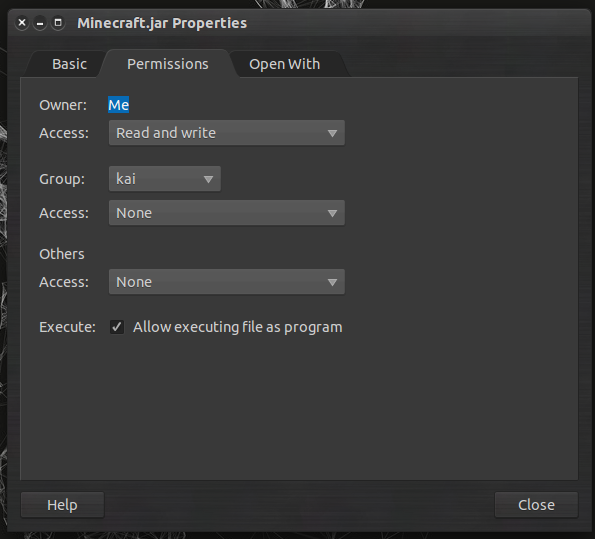 Go to Open With and set OpenJDK as the default. 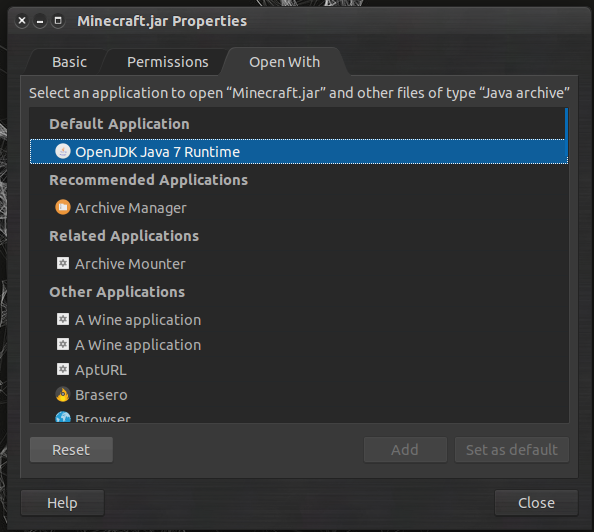 He should still change the Nautilus settings just in case he need make a script for something else.