So GTA V for PC is delayed...Again. Thoughts? 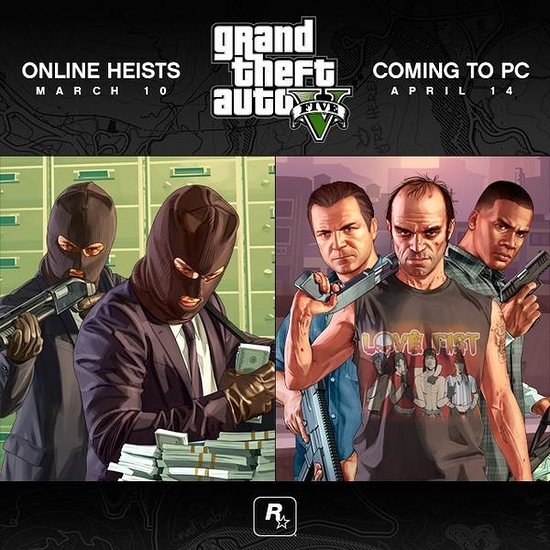 I have a lot of things to say about this decision. Many of which are conflicting but I will say these two thing:

1. Why bother making a release date?

2. DO NOT DISAPPOINT, ROCKSTAR!

Well, they gave it so people have some general idea and of course you can't pre-order without a release date!

But in all seriousness, I really don't care. I played GTA V on the console. It was mediocre. Bad/dumb story, unlikeable characters, gameplay was a bit of a mess, broken physics... I won't be buying it for the PC. So it can take as long as it likes.

If you just want to have fun in a crime murder sandbox you could just play the Saints Row games. All of which I'd say are more fun than GTA V and already available for Windows...

and I bet it will still be a buggy mess on launch despite the pushbacks. I just can't trust developers anymore. I want this game, it looks like good drunken laughs with friends. But...I am just losing all hope for future console --> PC launches.

Hopefully it's optimised well by then. Unlike some other R* games *cough* GTA IV *cough*

Hopefully they are polishing it and making it a great port, i'm willing to wait a bit longer since I already own the game on console.
If the PC port is horrible though i'll never purchase anything from rockstar ever again.

What I think about the push back: Oh, well. That sucks, but there are plenty of other games to play until it releases. Whenever that is.

Why they pushed it back: Utter bullshit "pre-purchase wars", Rockstar wanting to be the king of something else that doesn't matter. To get more orders for the game paid in full to fill quotas at R* Marketing, necessitating the need for more bonuses.

The Saints Row games are fun and all, but they're too far over-the-top in my opinion. I enjoy at least a little realism/immersion, and Saints Row fails to deliver that.

With that being said, I don't really care about the delay. I don't plan on purchasing GTA V on release anyways. Probably going to wait for a 75% off sale and a GTA itch to arise...even then, I'm tempted to just sit this one out. Until Rockstar gets their shit together, they will not receive my full support.

Here is what I speculate is actually going on.

They took a look at shitty ports and decided that GTA V would break them it if was just a port so what did they do? Took two years to make GTA V PC from ground up. No port. Real legit PC game.

I also speculate that this is all bullshit and its going to be shit when it gets released.

that's weird cause most console games are developed on the PC

so that they're not competing with hardline for sales

That's pretty much exactly how I feel about it. I played through GTA 5 already on the xbox, and while it was painful to watch FPS drop to sub 20 at times I did enjoy it, but I can't possibly see myself paying full price for the game. $30 would be my maximum, but even for that it would have to be a GOOD port.

it's just because they don't want a competing release time with BF:hardline.,,,

This made my laugh out loud. Well done

Don't care about GTA 5 anymore.  Would've cared 6 months ago but they waited too long.

Places have been taking pre-orders since before it had a release dates even for the console version.