Hello,
I’ve been going bonkers the past few days trying to get my SMB share to go above 1MiB/s on Manjaro. I’ve tested the connection on native Windows and I can easily get 80MiB/s from my Freenas server. I’m also able to exceed 10MiB/s when downloading Steam games from the internet, and from my Steam cache hosted on the same server. The best performance increase so far has come from mounting the SMB share via SMB4K, however that usually just sits around 1.7MiB/s.

I’ve attempted to edit my smb.conf file, as per eggplant.pro/blog/faster-samba-smb-cifs-share-performance however that mostly just gets the connection to stabilize around 1MiB/s rather than fluctuate. I’m currently on the most updated version of Manjaro KDE Plasma.

smb encrypt = off Maybe? Although I’ve never had to do that on FreeNAS.

Can you see what the raw network speed is between FreeNAS and your Linux machine with iperf? Or even just try nfs/afp/rsync to see if the issue is limited to smb?

There’s no difference with encryption being turned off. 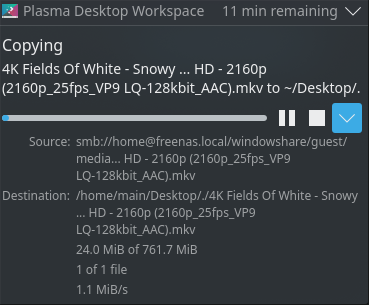 iperf gives a near gigabit connection.

Mounting an NFS drive gives me 150MiB/s up and 1MiB/s down.

I should also mention I can stream native 4K videos from plex just fine to my desktop over this connection.

smb is 1Mbs in both directions?

Sorry, I didn’t think to verify the upload speed before posting. SMB is easily 120MiB/s upload.

Can you iperf in the opposite direction? Looks like maybe a cable, switch or nic issue is causing one direction of the duplex connection to run at 10mb/s.

It couldn’t be a write issue could it? If I owed is fine both ways, and upload is fine?

Replacing the cable didn’t fix it. I have an Intel I225V nic on the desktop if it helps, otherwise everything has been verified to run at full duplex gigabit speeds this evening.

Oh yeah definitely something up with network there. Please list every device between the manjaro box and Freenas. 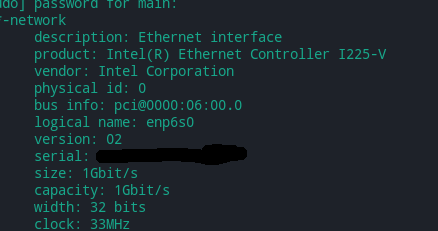 And the cheap gigabit switch:
TL-SG1005D

Just my two cents but I have had one of those cheap switches before and it didn’t like being thrown too much.
Could not handle multiple tvs streaming netflix at once. Maybe 3 1080P tvs.
Also used it as a temp switch for my office. Did not like a network transfer going on while Youtube streaming. Not saying its your problem but something to consider.

Yeah, I’d lean toward blaming the switch at this point also. Do you have a spare you can test with?

Are you sure? The switch runs just fine under Windows. I mentioned this in a discord server and someone mentioned it might be a known bug with my intel chipset.

Same port even? Sorry not sure if you’re dual booting or what.

I ran windows before installing Manjaro and it was just fine, even with the same port.

Possible to test a direct connection to the NAS?

What Samba version is the connection at? Wonder if it’s dropping to a lower version?

What Samba version is the connection at? Wonder if it’s dropping to a lower version?

It’s showing up in iperf and other file sharing protocols, it’s not samba.

when a direct connection test is run. However, I’m still being limited to 1MiB/s.

I’m really starting to suspect it’s the NIC on my side at this point.