So, I’m wanting to try & setup custom fan curves/profiles for both my GPU & for my case fans. (Just to help with the overall cooling since I’m pretty sure I don’t have much airflow ATM. To be clear- I know how to find the appropriate setting in my BIOS. I simply lack the experience as I’m not really an expert or a pro compared to others out there as it’s still new to me. I had tried this before with the GPU to mainly help with cooling where I adjusted ONLY the fan speed. The only problem I had afterward was I was hearing little bursts of air coming from the GPU when I was just sitting at my desktop doing nothing! (Which leads me to believe that I didn’t do a great job when creating the fan curves for certain temps, etc.)

With that being said, I would very much appreciate any tips, advice, pointers, & suggestions that anyone might have for me!

BTW, the link to my build will be provided for anyone who’s curious.

If you happen to need any further details or wish to ask me anything about this, feel free to do so & I’ll get back to you in a flash! Thanks to anyone who can help!

A similar question was posted here:

Hi everyone, i just built my first ever pc and now the r5 3600 stock cooler is making me mad cause it goes up and down in rpm constantly, currently i am sat in my bios and looking up stuff on my phone so forgive me typos, now setting up my all my fans: -whats a pwm -whats dc -how low can fans go -how low is healthy for a fan now those are all googable questions yes, but in combination with how the fan looks in the end is whats troubling me. currently i got my rear exhaust fan set to pwm: 20% @ 10c 20% @ 45c (flat so it has constant noise while idle) 40% @ 70c 100% @ 85c fan is a noctua nf a14 industrialPPC-3000 pwm, cause bigger numbers are better right? :^) now is that set proper, is the idea behind it right, was this fan a mistake cause it cant go as low or am i missing something that could make it go lower? theres not alot of videos on this as its probably very intuitive to the seasoned builder, everyone just says set a curve, not how to set one

final question: am i overthinking this already?

Can’t comment on GPU fan settings as I just rely on automation for that.

Somewhat similar scenario compared to mine, but not by much. I should have mentioned for setting the fan curve/profile for my GPU when I tried, I was using Gigabyte’s Aorus Engine. My case fans are in PWM mode in the BIOS as those are the stock settings. (But I do believe the cooling can be a bit better with some fine tuning.) As for how I want my cooling performance to be in general, I just want the pc to have improved airflow & for it to be quiet when needed. (Basically I want the fans to ramp up in speed when the temps start to climb while under load. If I can make them quiet, that would be fine too.) Hope someone else can still help!

Okay, some questions regarding your setup:

As for how I want my cooling performance to be in general, I just want the pc to have improved airflow & for it to be quiet when needed.

As I said in the linked thread, on a more open case, keeping the fans in the 4 to 600 RPM range will achieve that. For closed off ones, you will have to ramp up sooner.

I should have mentioned for setting the fan curve/profile for my GPU when I tried, I was using Gigabyte’s Aorus Engine.

I am running a 5700XT and zero fan mode (what you want for quiet operation) is not available to the user, just to automation. Depending on case airflow, you can get quite far without GPU fans turning on.

I did provide the PCPartPicker link to the parts I’m using in my build, but I guess you missed it or something. So I’ll simply tell you since you asked.

For the case I went with the Corsair Crystal Series 680X. There’s been a bit of debate as to whether it’s good for airflow or not. I personally tend to believe it depends on your setup/config you have.

And for the CPU cooler I went with the Cryorig R1 Ultimate which is just a tower air cooler.

BTW, I forgot to add my parts list when I did this post. I just added it so you can view it. Just be sure to look toward the top! Hope this info helps so you can help me out!

I guess you missed it or something

Should be alright for airflow.
Maybe get another fan and put it in the last stop on the top.

Seeing as those fans only go down to 600, I would try to get them all down to that. When temperature on the CPU gets up to 50°C-ish, ramp up just the intake and the rear exhaust fans.
So this should happen: 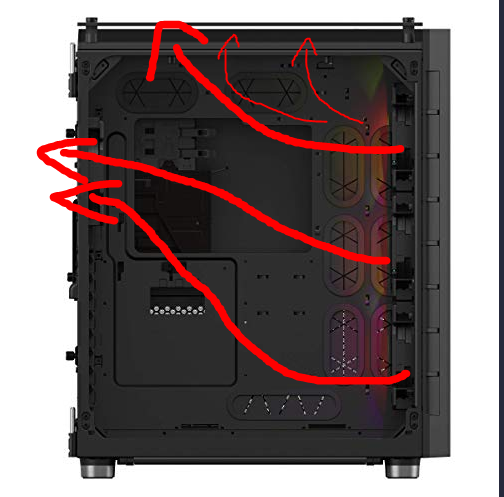 If you spin up the first two fans in the top, you essentially do this: 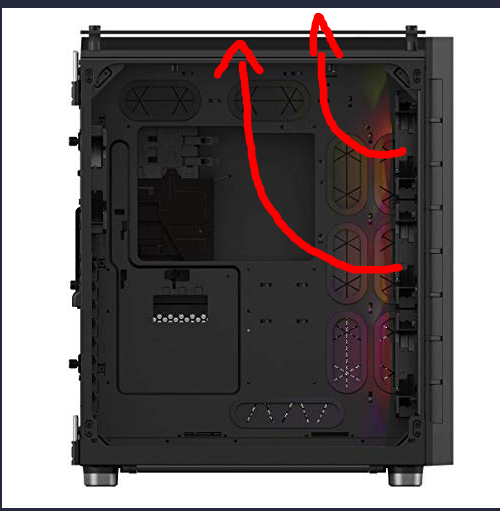 Well, I had originally wanted to have 6 of the LL120mm RGB fans in my system, but I actually chose to cut it down to 4 RGB fans mainly for better cable management. So that means I just have the 3 fans in the front & the 1 at the back. The CPU fan itself I’m not worried about as it’s left at Auto in the BIOS & it’s been doing pretty great at keeping the CPU cool from what I’ve noticed.

I assume when the temps start to climb, it might be best if I have the fans ramp up gradually so as I won’t be hearing annoying bursts due to RPM irregularities? Not sure about what might be best for monitoring my CPU temps… Did you have a solution to my concerns about the GPU or not? (I hope to apply the same approach to the GPU: have just the fans ramp up when the temps start to climb.)

Okay. I would put in 3 in front and one in the top rear and in the position of the stock fan. That way you pull air through the whole system and don’t just circulate it through without doing anything.

I do fan speed in shelfes, so it is constant until a certain threshhold when they bump up.
The way my mainbaord handles it, it keeps the fan at the higher speed for at least 30 seconds so I don’t get up and down.

Not sure if SpeedFan can poll from the GPU and change fan speed from there. Else you would have to get a fan controller with temperature probes.

Did you have a solution to my concerns about the GPU or not?

Will look into it in the next few days. Can’t promise anything.

OK. But I just wanted to make you aware that I don’t have any fans in the top as much as I wanted to; it’s just the 3 in the front & the 1 at the back as an exhaust. Nonetheless, I’ll keep your suggestion in mind about target temps. For my concerns about cooling the GPU better, I’ll do a little looking around, although I’ll admit I was using the Aorus Engine to try & setup the profile/custom fan curve at the time. But I’m not sure if MSI AfterBurner would work better for my needs. Just thought I should let you know. Thanks for the replies BTW!