Hi everyone,
i just built my first ever pc and now the r5 3600 stock cooler is making me mad cause it goes up and down in rpm constantly, currently i am sat in my bios and looking up stuff on my phone so forgive me typos, now setting up my all my fans:
-whats a pwm
-whats dc
-how low can fans go
-how low is healthy for a fan

now those are all googable questions yes, but in combination with how the fan looks in the end is whats troubling me.

now is that set proper, is the idea behind it right, was this fan a mistake cause it cant go as low or am i missing something that could make it go lower?

theres not alot of videos on this as its probably very intuitive to the seasoned builder, everyone just says set a curve, not how to set one

final question: am i overthinking this already?

Pulse Width Modulation
Simplified: The more often power is on, the higher the average power. 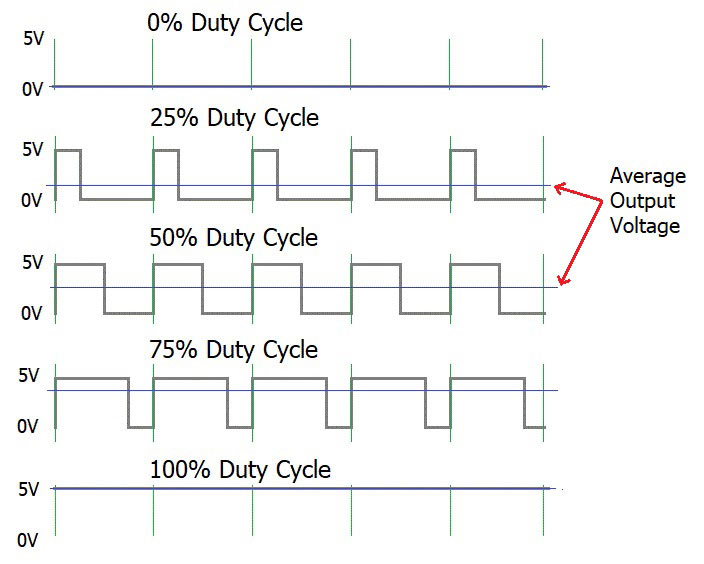 Direct Current, + and GND are fixed. In context of pc fans, this often refers to changing the supply voltage to the fan to control its RPM.
The advantage is that any fan an be controlled this way.

how low can fans go

Until they stop spinning.

how low is healthy for a fan

Depends.
When it has a proper PWM implementation, 0% PWM will just result in 0V on the motor, completly fine.
When 0% PWM results in some voltage accross the fan motor, you will heat up the coils and cause degradation over long term.
With DC control it is the same, 0v is fine, 3.6V and the fan not spinning is to be avoided.

cause bigger numbers are better right? :^)

For pure cooling, sure.
Noise wise… Depends on your headphones, I guess.

Fan curves:
Depends.
When you have a well ventilated case, 400 to 600 RPM at all times for case fans should do nicely noise/airflow wise.
Maybe you can spin them up when your CPU or GPU run warmer than 60°C (some GPUs support case fans).

When you got one of those blocked off cases (glass is not air penetrable last time I checked) or a silence focused one, just go for 550RPM.

I run mine at a constant 600RPM until 40°C on the CPU, then ramp up to 800RPM at 55°C CPU, after that is takeoff Because my cat likes to sleep on the exhaust fans…

CPU air cooler:
Depending on the cooler and CPU and expected workloads and how good case airflow is, you could go for a constant 600 (assuming 120mm).
I regulate mine up from 550 at 35°C to a shelf until 55°C where it goes to 900. Only takes effect when my cat blocks the top exhaust of my case by sleeping there.

CPU water cooler (AIO):
Pump at 70 to 100 at all times. Just keep it at constant RPM.
Regulate fans according to temperature, keep in mind you want to keep the liquid below 60°C at all cost (so 70°C on the CPU is take-off speed for the fans).

Open loop:
I am not qualified to talk about this.