I cannot tell if this is too good to be true or not, seems like an amazing deal but I feel like I am missing something. Anyone know anything about these or have a better suggestion in mind?

My only plan is hosting a couple web servers maybe a game server and a little Virtualization.

And this is not a hardware locked OS is it? Can find no info on the subject all Google yields is for sale things. I'd like to just throw Windows server on it with the option to move over to Unix at any point.

Just found out it only has 2 SATA slots actually... Not so sure anymore, thats max 8-10tb. But it does come with 4tb already.

not too good to be true. you can find better, but not a bad deal. free shipping is good.

I wouldn't necessarily be too concerned about a storage limitation like that. Considering the speed that you'll get from directly attached disks on that would be pretty similar to just running iSCSI on a 1 gigabit connection, it would be possible to add more storage without too much of a compromise.

I would be on the fence if I had the extra cash (and room to spare) for one. If you definitely have the use for it, it's a decent enough box to get. Otherwise, I concur with @_adrian.

Any specific brand or model or area to look in for a better deal?

That is true I didnt consider external storage.. I have wanted an upgrade from an old Dell PC/"server" I have had for a while. Plus I'm moving to a house with Gigabit internet options and plenty of rooms.

What are you currently using?

Also, when I say gigabit, I mean the speed of your internal network. Long story short if you have a 2nd machine as an iSCSI target connected to that directly via a single ethernet cable, that would work.

I knew what you meant i'm just saying I could host for people reliably with 1G/1G fiber compared to 150/17 cable internet. So it makes it a little more worth it.

I actually thought that sounds about right... It is a couple generations old but good value though !

Any specific brand or model or area to look in for a better deal?

something newer. newer = less power, better performance. what you're looking at is 65nm and ddr2. if you have a use for it (i.e., will do what you need) and it's in your budget and you don't want to spend time looking for something else, it's fine.

i wouldn't buy something older than a G6. BUT,

so, up to you. i'd encourage you to research what you're getting, but i wouldn't flat-out warn you away.

That G3 is a pair of non-hyperthreaded, lower clock quads with DDR2 ram and used hard drives. Your best off spending a bit more and getting something DDR3. Really any DDR3 quad core hyperthreaded old server is going to spank that thing.

So I bit the bullet and bought it, funny part is this popped up after checkout..

apparently people that buy servers on Ebay like vibrators??? 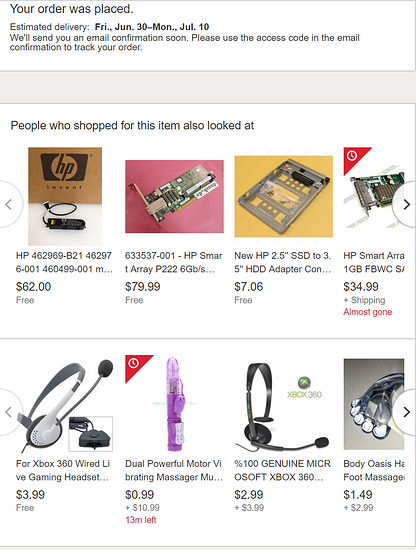 Was only 100 bucks so fuck it, I'll trash it in a year or two when it becomes unusable from age.

Will it run Linux?

Yes it will, not hardware locked

It's crap. Just max out your RAM and run VMs.

Whats crap about it the RAM?

apparently people that buy servers on Ebay like vibrators???

great, but also it seems to prevent prostate cancer, so 13 minutes left, better hurry up.