Self Driving car kills a pedestrian

Well it looks like the first person has died because of a self driving car. A pedestrian pushing a bicycle was hit and later died in hospital. There was a driver in the car but they did not intervene and the car was autonomous at the time.

I am sure Uber will not want to show all the details but hopefully the police release some details on what occured to cause this. 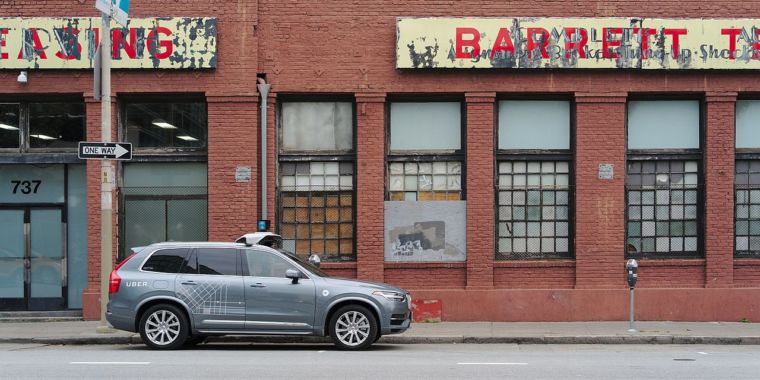 An Arizona pedestrian died in the hospital following the crash.

Well, it was inevitable. People get hit by cars. No one thought that self-driving cars were going to be perfect and this is just more evidence of that.

This will not kill the idea for self-driving cars though.

On the plus side (not that it benefits the person who died), self driving cars have so much data, it should be easy to find out exactly what happened. Something that’s not so easy with regular cars.

Yep, and hopefully it can “learn” from that.

What’s done is done, we might as well try to eek a silver lining out of this cloud.

The Tesla crash that killed someone was a good example of this, the data was explicit in exactly what happened that lead to the crash.

Machine-slaughter? Surely manufacturers have a way to cya.

Yep, and hopefully it can “learn” from that.

I hope that idea isnt how skynet begins…

This just in… " self driving cars get better at killing pedestrians"

This just in… " self driving cars get better at killing pedestrians"

I did see a comment. “Now they have a taste for human blood we are doomed”

I agree this needs to be in context. If she walked out from the front of a parked truck with no time to react is like only an act of god could have done anything.

I did see a comment. “Now they have a taste for human blood we are doomed”

Too late, those boston dynamics robots and drones got started waaaaaaay back.

If only we could teach people that even though they have the legal right of way when on foot, they still will ultimately lose against the car.

Which is why I think pedestrians having the right of way makes zero fucking sense. It’s not based in reality. In reality, when on foot, you should yield to the car because the CAR WILL FUCKING KILL YOU. The driver might not be able to stop.

Them having the right of way only creates a false sense of safety.

I believe pedestrians need to have the right of way due to the fact they are vulnerable. Just because you have the right to do something doesn’t necessarily mean you should exercise that right if unsafe conditions.

The problem I see, with experience as a former delivery driver is that people take that exact mentality to being a pedestrian.

They have the right of way, so they just walk out into traffic and expect the car to stop. And that’s a very, very stupid assumption to make.

They aren’t as vulnerable if they’re the least little bit intelligent and paying attention to their surroundings.

It’s much easier for a pedestrian to see a car and not walk in front of it, than it is for a driver to see a pedestrian not paying attention and bring their vehicle to a stop at the last second.

It would be a better solution if only drivers knew that rule. The intent is that because the pedestrian loses in every case, the car should try to stop because dead people are no fun.

RIP and condolences to the family. However self driving cars running on clean energy are the way of the future. They can’t come soon enough to the masses.

Every driver is at some point a pedestrian and vice versa.

I just feel like the law is so counter to reality that it borders on insanity. The car wins, every fucking time.

Who fucking cares about right of way when you’re dead? Not gonna benefit you at all.

My state has a law requiring drivers to stop for pedestrians in a crosswalk.

That would be illegal either way though. That would be some form of intentional vehicular manslaughter/murder.

Plowing into a crowd of people is illegal anywhere and pretty much everywhere AFAIK. So the only thing this law does is make the driver always at fault unless it can be proven that the pedestrian intentionally threw themselves in front of the car (suicide).

And create the false safety that “they have to stop because I have the right of way”. I’d still stop without it, but I feel like the law makes them think something very stupid.

In CA, if you hit a pedestrian, your ass is grass. As a result, there are assholes who intentionally fuck with cars because… they can. I hate that state.

I have lived in all three states and and I prefer the Texas method. At least with other cars on the road, if they are stopped it queues you to slow down and look around.