There must be something I can do in software to emulate the effects of having a monitor plugged in so the card renders an output that can be sent somewhere else. The dongles aren’t an option in this case; it doesn’t even detect monitors when plugged in.

a kernel argument for amdgpu allows this

you may also be able to make use of virtual GL
https://www.virtualgl.org/

is it really working compute wise ?

So is it confirmed that the rest of the card is good ?

you can always remove and solder on a new hmdi/display port/whatever. solder is cheap, ebay parts are cheap, guides are on youtube and its not exactly difficult. heat up remove add solder put new one where the old one was. if it doesnt work heat it up again and try again. you get to learn a new valuable skill out of it too.

RDP / VNC and force-set a resolution.

Hopefully that’s noob friendly. Sounds smart. I don’t even know wtf a kernel arguement is, so…

Physically everything is fine. As far as i can tell.

Maybe, the 0.95 Rail for the Display outs died. if the vddc 0.95V rail died, you wouldn’t get anything since that is for the memory controller.

I checked all VRMs. I was hoping it was the display out VRM.

can you maybe mark what vrms you checked on a picture ?
And there is one oscilator for display outs, i thought hdmi only, but who knows.

Its that shiny golden square right beside the GPU Core. You should measure like 1.6V out off one of it its legs.

I recently pulled it out again. An active DP adapter works; can play Fortnite just like I did when it was new; still won’t display BIOS.

I’m looking at installing it my server board that also has onboard video, so it’d at least still be fully functional. Maybe one of the better E5 V1 or V2 Xeons will pair decently with it. Then My Ryzen system can be general/stream use and for everything else. Some of the audio stuff I do ads latency… obviously not good for gaming. Won’t matter if I get the Steam Deck and it turns out as good as I hope or better.

With my current understanding of display interfaces, I don’t understand why there’d be an oscillator, considering that all the signals have a different frequency depending on resolution.

I could see that oscillator being relavent to my problem if it handled the PCIe serial communication. Similar to how the EEPROMs on DRAM work. RAM wouldn’t need to be working to pull that data, and the EEPROM wouldn’t need to work for RAM to work. That would explain not working in BIOS but working once windows get’s ahold of it directly. Doesn’t explain display output problems; but maybe the faulty monitor PSU killed both. I seen datasheets for simlar parts mentioning HD audio use, but 27,000,000 isn’t devided evenly by standard audio sample rates.

Turns out the serial pins I thought mattered for POST are just shorted together on the card. 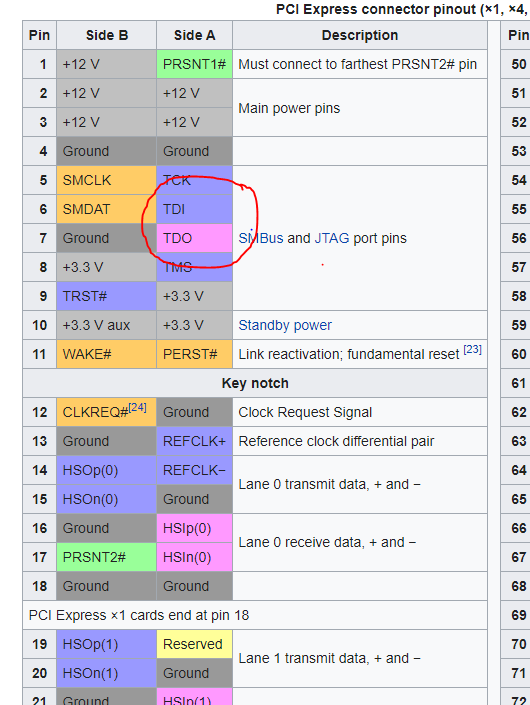 I still can’t imagine it matters for video out or anything to do with audio, but the initial clock that get’s the card started, sure.

Yeah, I think this points in the right direction. 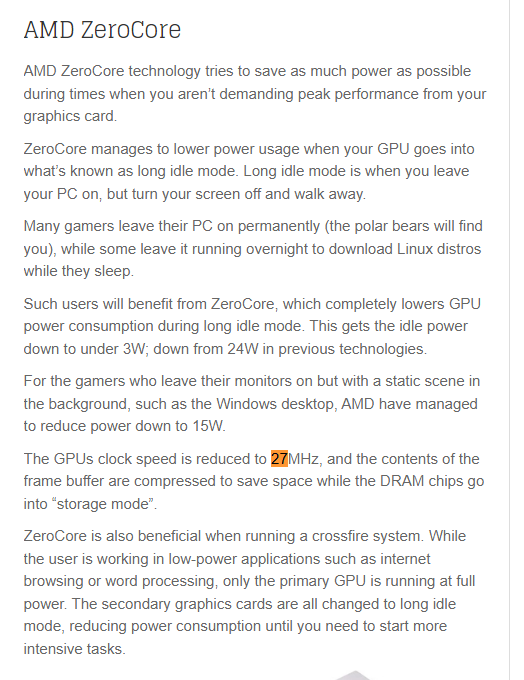 If I knew I could just pull it off and it never go to idle, I would.

This sure doesn’t help. Ghetto cooler mount ripped this thing up today. Pulled pads from PCB. Looks fixable though. Would be great if I slightly fucked it up a while ago… doubt I’d be so lucky to have this be the fix. 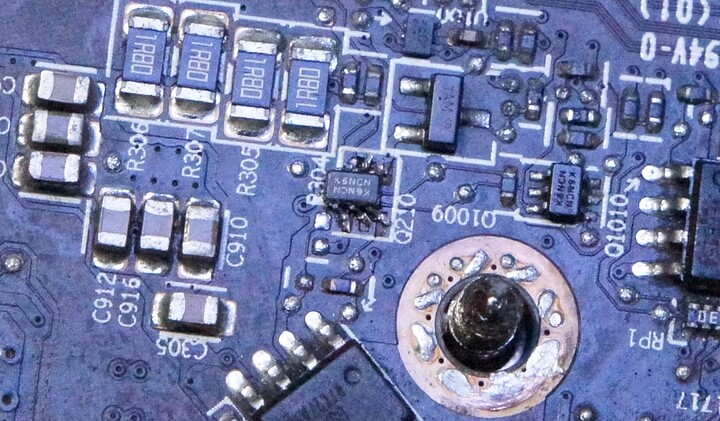 Well, it ain’t pretty… it also doesn’t make the card function right, so… 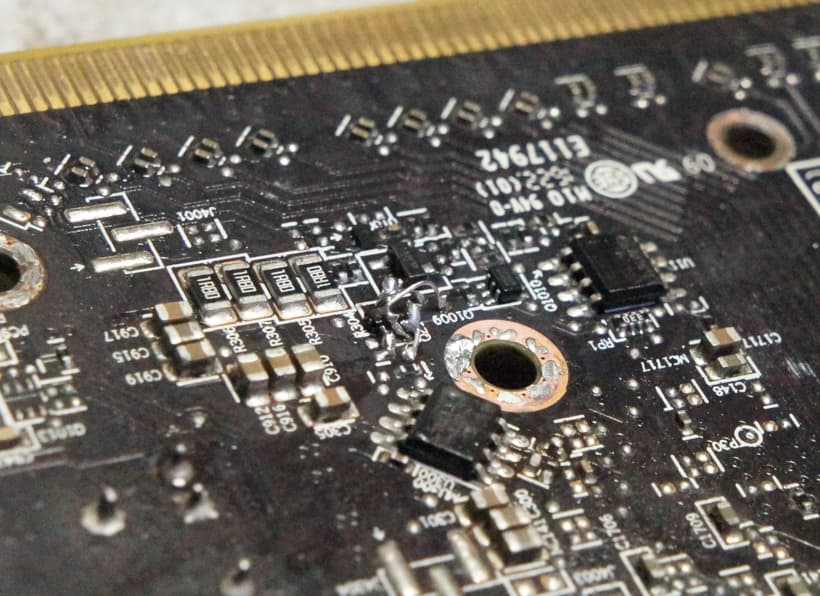 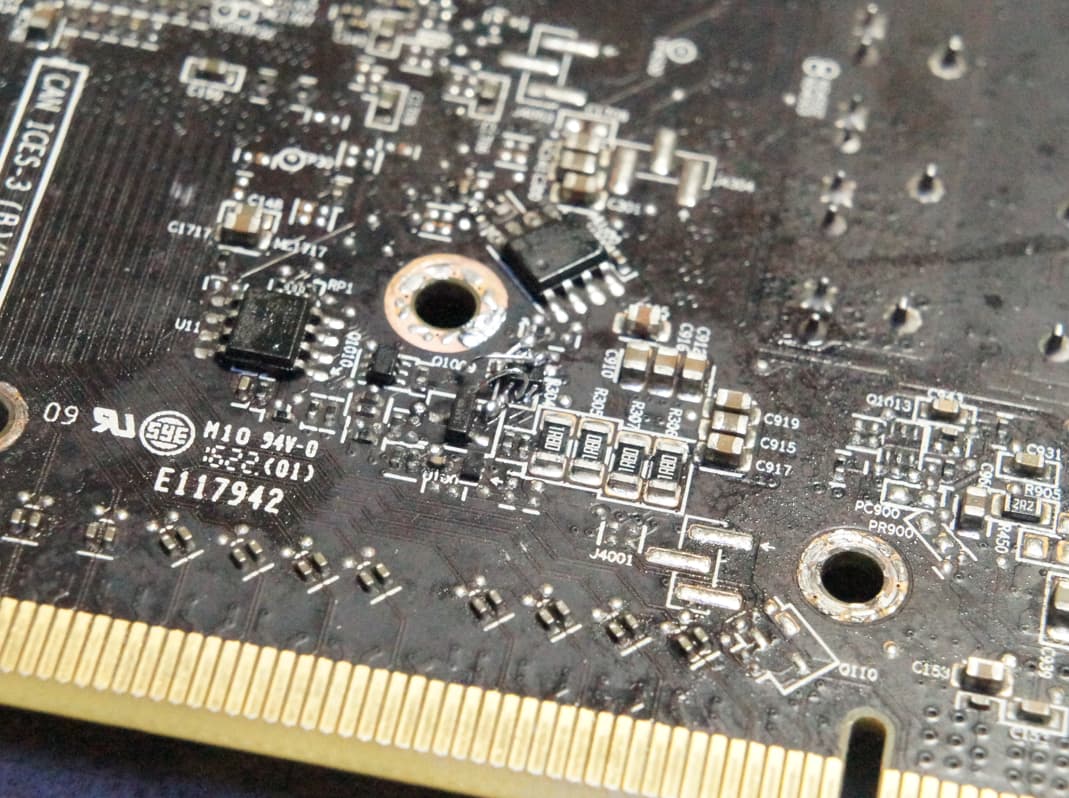