Hi all am new to pc world just got my new pc with x570 tomahawk motherboard and 5900x amd processor with msi 360 liquid cooler… rhe pc is always on 57c when i open it when i open taps in chrome it gets up to 80 and more … when i open streamlab obs to stream and open a game like hit man it hit 90c and keep still the same thing when i render on Premier whenever am opening any program it goes up to more than 80 and then get back around 60 to 65 is this normal ?

It should be lower than that at idle. Could the AIO liquid cooler not be making good contact? 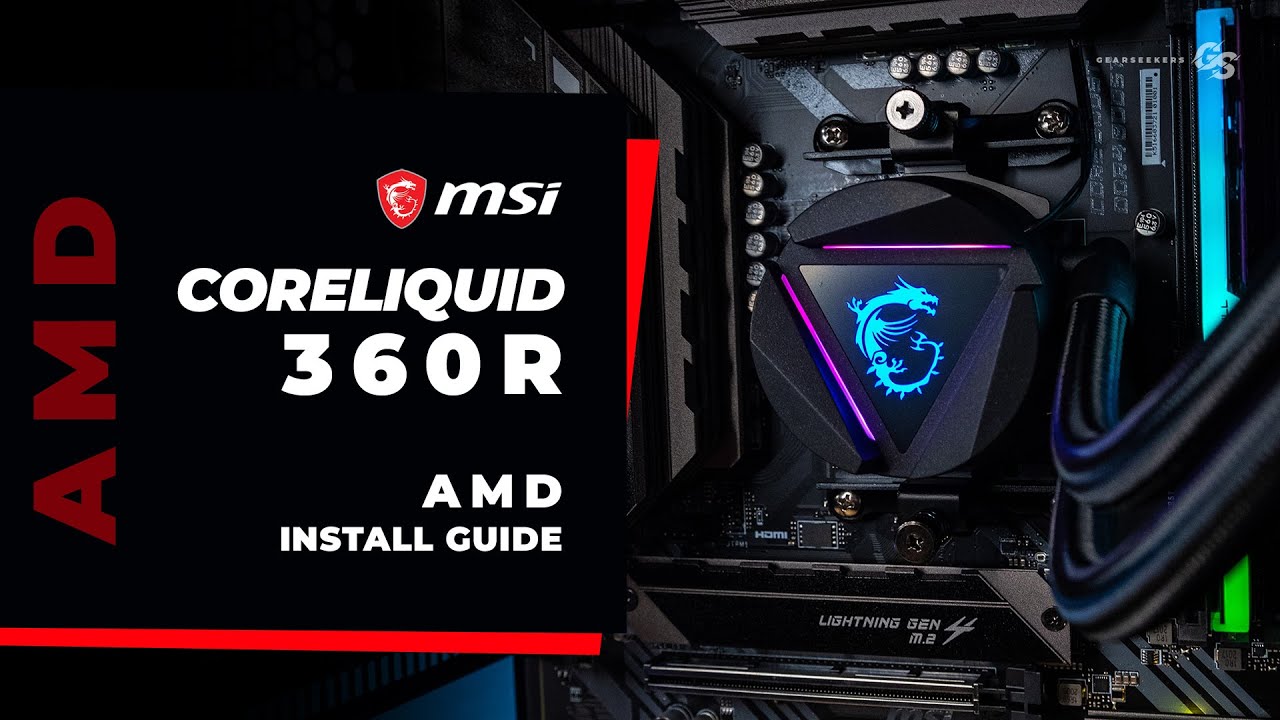 The temperature spikes are normal for Ryzen chips. What’s not normal is the idle and spike temperature. They should be at least 20°C lower or even more for the spikes.
The causes could be 2 (or 3 for the longer loads on the system):

I’d check everything in this order. And if nothing is wrong I’d try to reset the BIOS and see what happens.

57 is not normal ? When am playing hitman it goes to 65c … rendering and streaming up to 90c … all of this on ryzen master ? How do i change the fan ? Am running msi master command on average not max performance … also when i startup the pc it goes from 87c to 53 in less than 30 seconds is this normal on starting up ?

Context: is not normal if you’re idling to the desktop, in my opinion. I have a 3700x cooled by a small Noctua cooler and at the desktop I’m in the 35°C range with a room temperature of 21°C.

When am playing hitman it goes to 65c

This is a good sign in the sense that the cooler is most likely not mounted incorrectly.

rendering and streaming up to 90c

In this case the cooler is not keeping up with the load, so you need to change fan and pump speed.

How do i change the fan

You need to figure out where are connected the pump and the fans, then go into the BIOS and set the pump header to 80-90% all the time (avoid max, it might be whining too much) and a fan curve you like for the fans.

It is considering you most likely only need to set the pump and fan speed in the BIOS.

Can i send you pictures from the bios ? And you tell me i have zero experience in this? 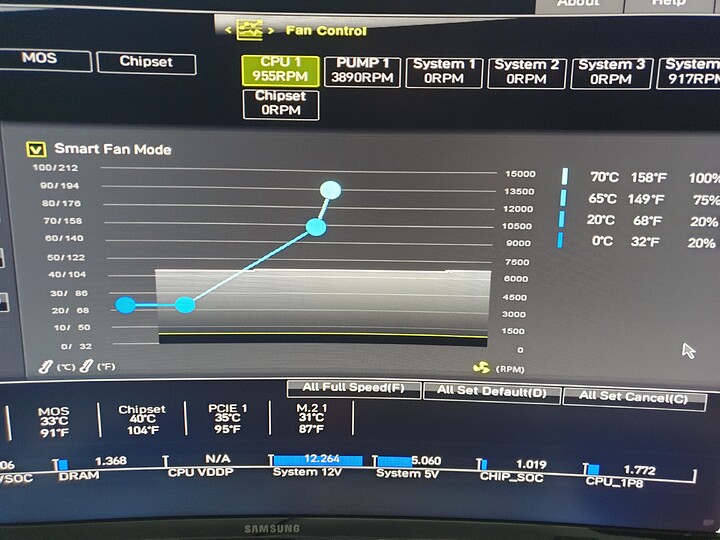 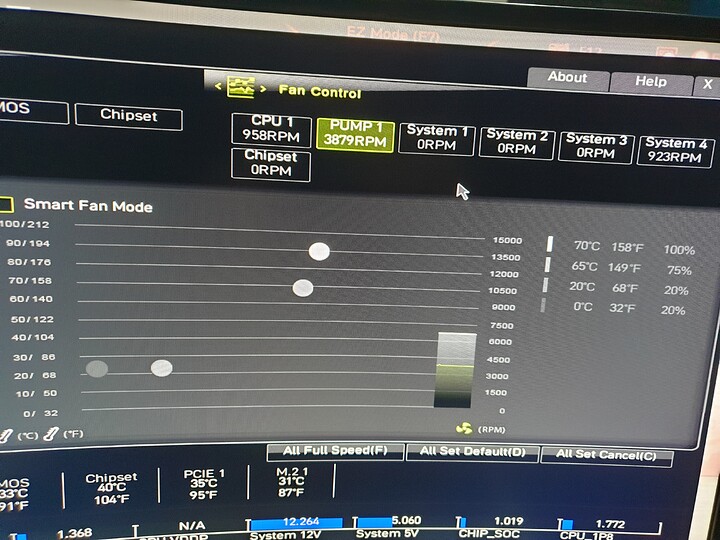 Anecdotally, I would also key in that my 5900x displays similar temps, albeit a little cooler (10C less). Rendering brings it up to about 85C max, and then about 82C sustained max once things throttle a little. My friend has a similar issue with his, we just thought that they ran hot because of the beefiness of the chip, but perhaps there’s some chip driver problems?

Or maybe, just a thought, the temps are reading higher than they actually are?

Edit: my 2600 rig in the same room runs are 26C at idle, so I don’t think it’s an ambient room issue, makes me more inclined to believe it’s a systemic 5900x issue. 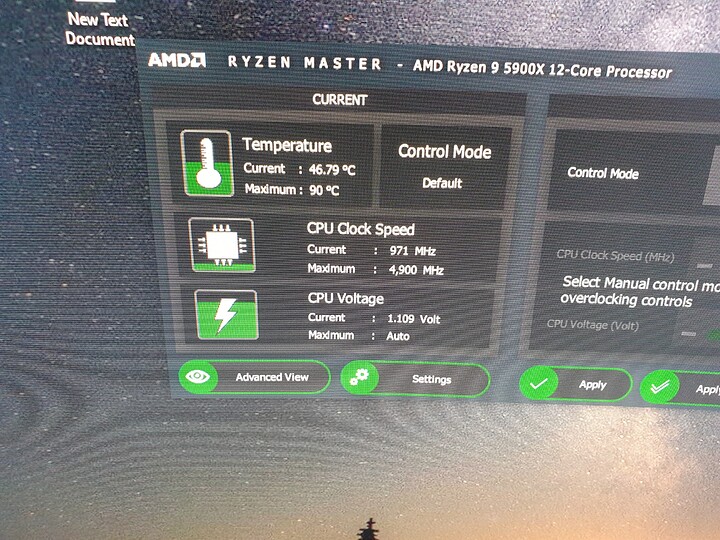 I’d set the pump static at 80% or even 90% (do some tests).
Regarding the CPU fan it’s just up to you on what’s the best compromise between noise and cooling. But, if I were to suggest you something, I’d say set the fans to 1100 RPMs up to 60°C and then up from there with a really steep curve.

P.S. it’s important to keep the pump going because the liquid inside the AIO should not rise too much while the system is in use.

Which cooler are you using?

Can you try re seating the cpu and apply new thermal paste/reseat cooler? I had a similar issue with my 3900x and what fixed it mainly was the application of thermal paste. and cooler pressure mount.

I just got the pc yesterday

Sure, go ahead and send screenshots! Don’t worry, no bother at all 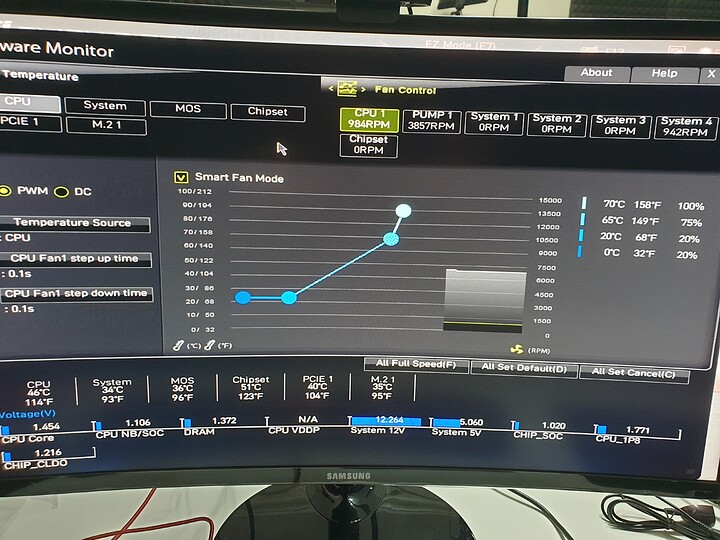 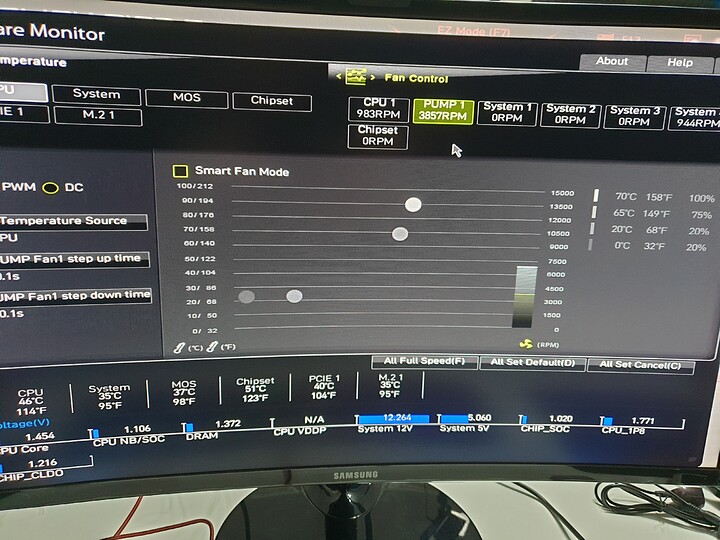 So you ara saying that the 5900 is hot by natural

Okay, MSI is VERY confusing in their layout, there are two axis but one is labelled twice. I’ll try to give you some pointers:

In the first pic you should be able to drag the first two points up just a little bit to increase the idle fan speed. Don’t move anything else.

For the second pic drag all the points so that they allign on the 13500 value on the right side.

I don’t know if there’s an MSI program that allows you to change fan speeds. I always apply mine in BIOS and use the Asus software if I need to change something outside the normal range for a specific reason.

I know why you’re having so much issues, these screens are confusing as fuck!