16 plus chipset
App is called CPU-L 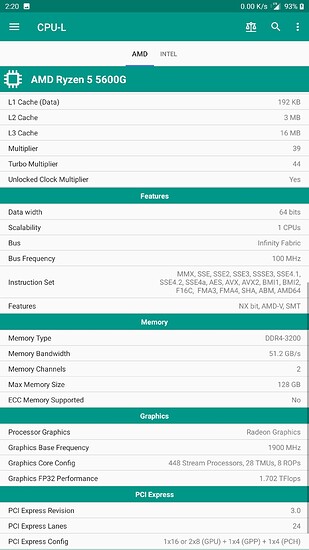 Hi,
I know abou the specs, but this info is correct if you don’t use the GPU part in this CPU, my question was - how many remains when using the internal GPU.

IIRC it doesnt take away stuff as it has its own? So it should be the same, it could be the cache that could be affected though…

iGPU is connected through the infinity fabric not PCI-E, it’s its own CCX

iGPU goes through it’s own thing and does not effect any PCIe lanes to any other parts of the board whether it’s in use or not.

7 posts were merged into an existing topic: 5600G pci-e 4x and 8x not working

All of them. Instead of getting gen 4 but half the lanes, you get gen 3 but all the lanes. PCIe controller/hub in CPU handles same bandwidth, so I’m sure it wasn’t that big of a deal to spinoff this SKU. Makes sense for those of us with earlier boards. Hoping to get a 5700G at some point.

5600g seems scam to me dunno. advertise false pci-e connectivity only full size pci-e devices work. 4x x8 does not. i mean why athlon 200ge works then ? but not new cpus ?

I checked on my Asus x470 mini ITX board, and surely it supports bifurcation for 2 x8 lanes

update: F63a rolled out recently and now x4 works it recognices my nic so it confirms it bios issiue afterall. x8 still does not work.

is there a way to give feedback on bios to gigabyte devs ?

So do x8 cards not work, or do they work but only at the lower bandwidth?

@MarcWWolfe not displayed on bios or anything. it was same with x4 before now it works.