Found this article about the RX 480: http://www.digitaltrends.com/computing/rx-480-power-issues/

From what I've gathered from the post if you OC it you run the risk of drawing to much power from your motherboard. Which after awhile could fry your PCI slot if you are lucky. I'd watch out for this and at the very least not OC the card at the moment.

edit 3: Found a reddit post with the guy claiming the 480 is causing issues with certain motherboards:
https://www.reddit.com/r/Amd/comments/4qfwd4/rx480_fails_pcie_specification/
I also saw some posts on the AMD forum as well: https://community.amd.com/thread/202410
*Disclaimer:I'm not sure how reliable the first post is. Only thing I can do is assume there is some truth. The second(AMD) one seems alot more reliable.

edit 4: Some links provided by @SoulFallen that migh be useful for you guys to form an opinion

Base specification
http://composter.com.ua/documents/PCI_Express_Base_Specification_Revision_3.0.pdf
PC perspective testing
http://www.pcper.com/reviews/Graphics-Cards/Power-Consumption-Concerns-Radeon-RX-480
Jay and Barnecles talk about it briefly in the beginning of this episode. (Jay barely seems to know more than we do so take it with some salt)
AMD reddit (trying to find specific posts will update once/if located)
https://www.reddit.com/r/Amd/?count=26&before=t3_4qtl5t
Overclock.net thread (lots of valuable info here, one of the posts even goes on to explain that the sum of the ratings of each pin in the connector adds up to like 150w)
http://www.overclock.net/t/1604477/reddit-rx-480-fails-pci-e-specification1

As you know, we continuously tune our GPUs in order to maximize their performance within their given power envelopes and the speed of the memory interface, which in this case is an unprecedented 8Gbps for GDDR5. Recently, we identified select scenarios where the tuning of some RX 480 boards was not optimal. Fortunately, we can adjust the GPU's tuning via software in order to resolve this issue. We are already testing a driver that implements a fix, and we will provide an update to the community on our progress on Tuesday (July 5, 2016).

edit 5: Seems like AMD has posted a driver update that supposed to shift some of the power load off of the PCIe slot in order to bring it within specification, however, this does put your 6 pin out spec... So people with old/crappy PSU probably should avoid OCing the GPU, but AMD has setting for you in the Radeo settings menu in order to fix this. Anandtech also ran some performance checks on it so I'd definitely check out the link.

Sooo I ordered a RX480 Hardware

Why is the mail man so sloooooooow. This bad boy is finally gonna upgrade my geForce 750TI(Which is not a bad card bang for bucks), but daym hurry up mail man, "ima wanna game sum", even bought the 3 Bio shock games through steam summer sale, i won't see sun light for a week. Been looking forward for this cards release for ages now, ever since AMD threatened with the release. What's you guys experiences with it sofar? good, bad, doesn't live up to the hype?

I ordered a RX 480 from newegg on launchday. Today, I ran into a reddit post describing how RX480's power-draw from the PCIE bus is in violation of the PCIE specification. Should I be concerned? My original intention was to purchase another card for cross-fire in the future.

No, the issue was blown way out of proportion.

same until recently
goes up to 300W from what i've read.

The 300W should only cover the board, running it over 82+Watt on a shitty board may potentially kill the slot wont it?

nop, it will never kill the slot.

Your gpu might not have enough power and loose stability.

other issues is when hot air blows on ports (some of coolers like msi's gaming one) over prolonged time can melt the plastic port. (happened a lot with lga 2011 mobo's since ram slots were really close to pci-e bus - but it wasn't fault of gpu... just poor design of mobo)

those type kind of mobos had this problem

Ok, did some research. Came up with a maximum of 300W, but that's the max. The source I found wasn't from a PC manufacturer or a education site. From what I gathered it's more or so up to the PC manufacturer to support this. So it's dependent on the motherboard manufacturer/chipset....

edit: However this is for PCI 3.0 so if you're using 2.0 you probably run the risk of card running under powered or damaging the mobo. 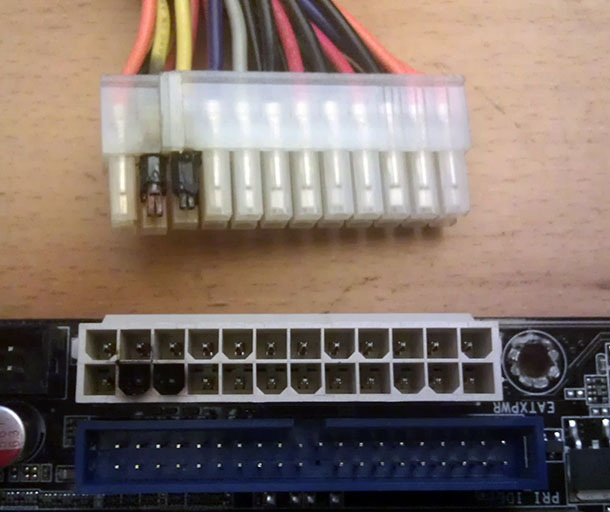 the card would just get less power, the motherboard will only supply as much power as it will allow, the card can't just forcefully draw power.

It's 300W total if you include the PCI supplementary connector.
But the slot it's self it limited to 75W and that's the problem.

but is this 75 watt total sustained power from turning on to turning off, or is ist for 10min of load, or ... no one ever asked for the observation period.

It is kind of overblown but it still might be a problem if you have an older motherboard. The solution is to wait for aftermarket models with an 8pin connector. You should never buy reference models anyway.

I'll tell you when my mobo melts. Currently -15% power target set and <100 W per card being drawn. Less than 600W total system power. All cards running below 70 degC fans ~3000RPM. That may go up as I learn how to optimize the current setup.

o god you are using a ribbon cable. It going to catch fire for sure

75W sustained is PCIe spec. That is 3.3V and 12V combined. Spikes up to 90W or even more are tolerated on nearly all boards. But more than 75W sustained might lead to problems over the long term.

1070 also eats more power than normal, nobody talks about that shit...
It is an issue, it could be solved easily...
If you want a GPU NEVER buy reference... Get an aftermarket card, like the Sapphire Nitro i am hyped about, or whatever Powercolor bring to the market... God forbid ASUS and MSI actually market a card, that sells like 20 times more than what they heavily market... So i don't care...

Don't worry I just ran my tongue along the ribbon cable and it didn't get burned!

Maybe gaming would be a different story but you have to be nuts to run 4 way GPUs in gaming now .... though maybe I'll try over the weekend just for kicks!

The 1070 has an 8 pin. So it can draw more power from there. 6 pin is limited to 75W, slot is limited to 75W. Basic math dictates that a power draw of 166 is not good. Don't get me wrong, I still think most new boards will be fine but there are old boards, budget boards which won't be fine. Here is an example:

AMD should fix this ASAP or they might ruin the reputation of this card.