I rescued an old Slot A Athlon system from the trash at my work. And I decided I’d like to restore it and make a Windows 98 gaming rig…Why? Because I can…AND I always wanted a system with a slot CPU. Here’s the rundown on what the hardware is…as best I can tell after some Google-Fu

The case a generic beige classic…but it is missing the side panel.

I have powered the system up; at first I had some error beeps. Turns out one of the RAM slots is apparently dead/damaged. That’s not a deal breaker at all. So here’s the run down on what I’d like to do…

Replace the case. Preferably with something with a basic “cheap/retro” feel. BUT I’d like something I could do a little bit of cable management with. Black is fine but beige/white would be sweet…

Replace the PSU. The PSU is old and the cables all feel stiff. I’d like to replace it with something new (maybe even modular), but I am unsure if a modern PSU will work with a board this old.

Replace the Floppy drive with a floppy emulator so I can use floppy disk IMG files and a USB stick to store any floppy based software.

Use a single optical drive. DVD with CD writing capabilities.

IDE to SD (or compact flash) to replace the HDD. I’ve heard this works really well. and it seems like the most logical solution.

Replace all ribbons with rounded IDE cables…I always loved these but never had them…it’ll scratch that itch and it will be decent way to replace these aging ribbons.

Replace Video Card…this is something I’m struggling with. I think my most ideal choice would be a Geforce 3 (64mb). I considered an AGP Voodoo card…but the prices I’ve seen are insane.

Add a PCI soundblaster card. This board has no onboard sound so I got to do something about that.

I think that’s basically everything. I realize this is probably the most impractical project, but I’ve kind of been wanting to do something like this and the opportunity has presented itself. I welcome any advice and suggestions. Especially leads on to wear I might be able to find good deals on some of these older replacement parts. I’ll probably post updates to this thread as the project progresses (at least I hope I do). 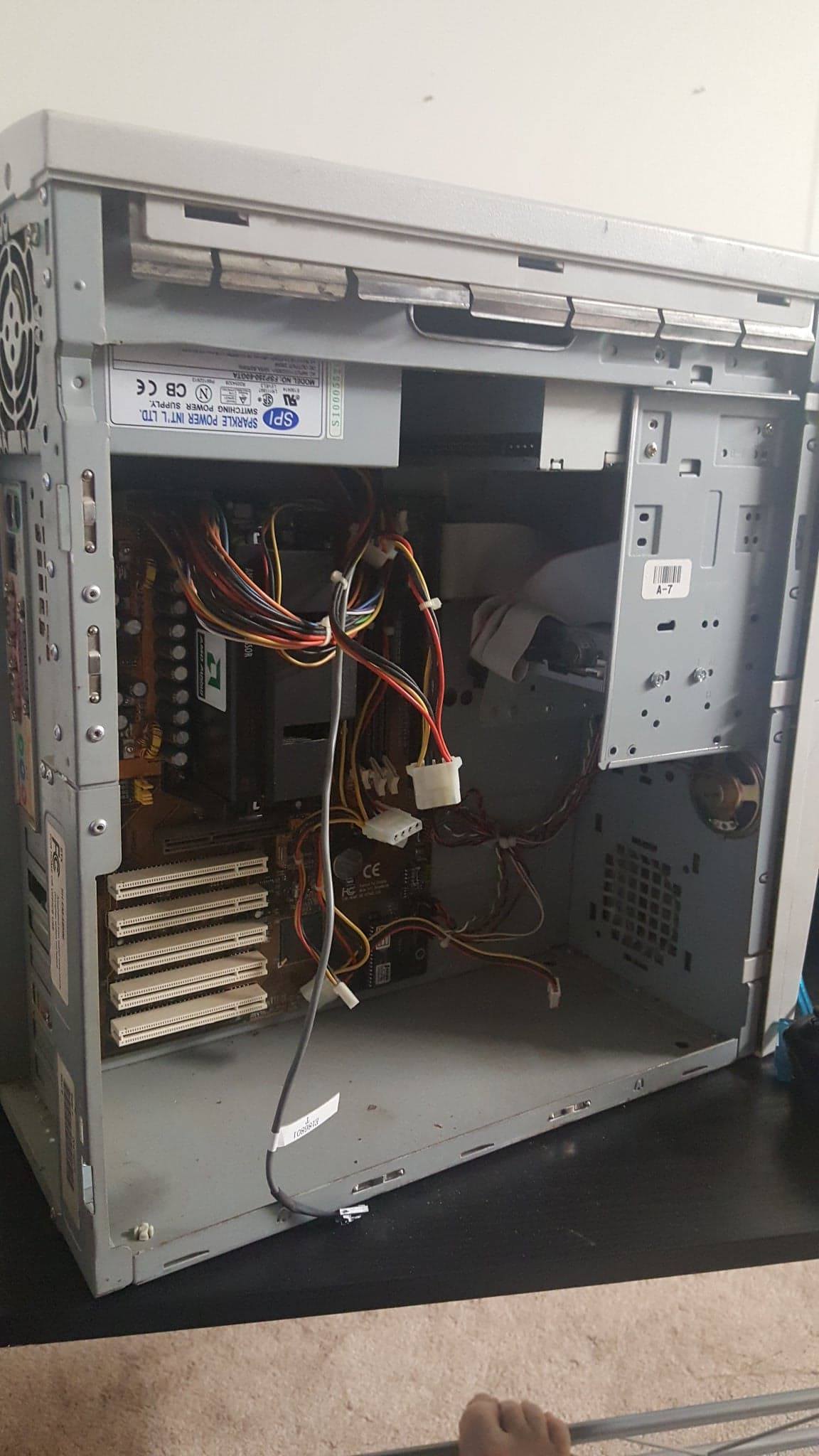 Personally I prefer the flat ribbon cables, they can be folded very neatly and tucked away, the rounded ones could never be made neat like that.

I remember building these machines, those AMDs run pretty hot, I would recommend some decent airflow through the case, a fan on the front where there is a cutout for it wouldn’t go amiss.

The GeForce 3 is a good choice, but a little new for the era, we were putting TNT2 and GeForce2 cards in these machines, the odd ATI Mach dual GPU IIRC.

Just watch out for bad caps on these older boards, they may not be bulged or spewing crap out, but they still over time dry out, even when not in operation. If you find you can’t resolve your memory problem and replacing the PSU doesn’t help, I would recommend you have the board either recapped or replace it.

Geforce 2 was on the table. I had a Geforce2 MX 400 in my first build. It holds a special place in my heart. I have rounded flat cables like that before these just feel really stiff (almost brittle). But new ribbons will be cheaper than rounded cables. Based on a quick inspection all of the caps look fine. None of them are buldging or anything hopefully I can figure out this ram slot deal

My inner 3dfx fanboy is already bubbling to the surface.

Always enjoyed retro builds. I want to repurposed one of those gigantic AT towers for my new TR4 build.

A voodoo card would have made me very happy but as I mentioned those prices are crazy. I’m trying to get things as cheap as I can even the cost of a new case is bugging me haha.

that would be a fun project

So tonight I pulled the board to start cleaning and sure enough there are some bulging caps. Probably going to replace those in the coming weeks.
Edit: Just ordered the replacement caps 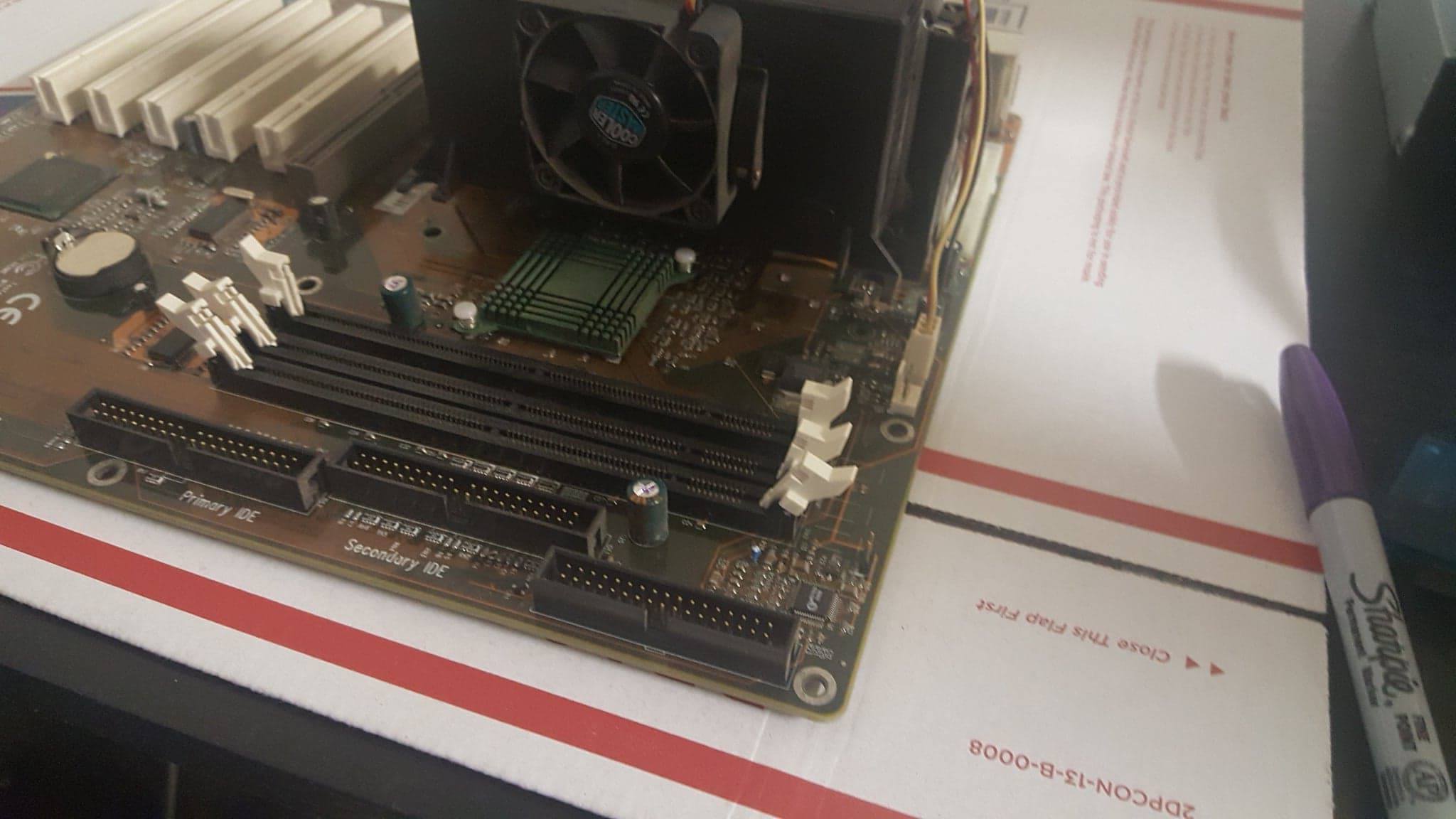 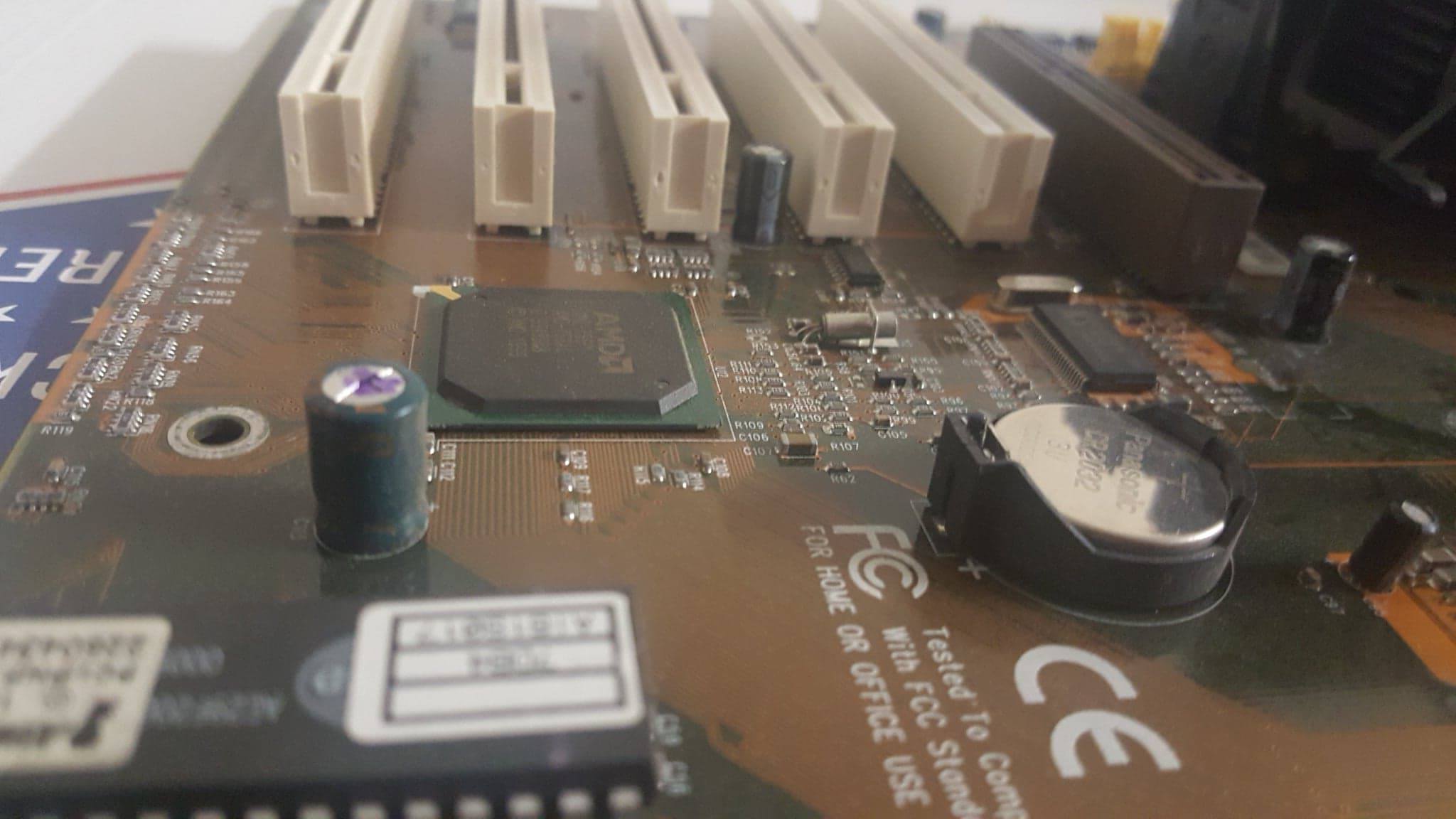 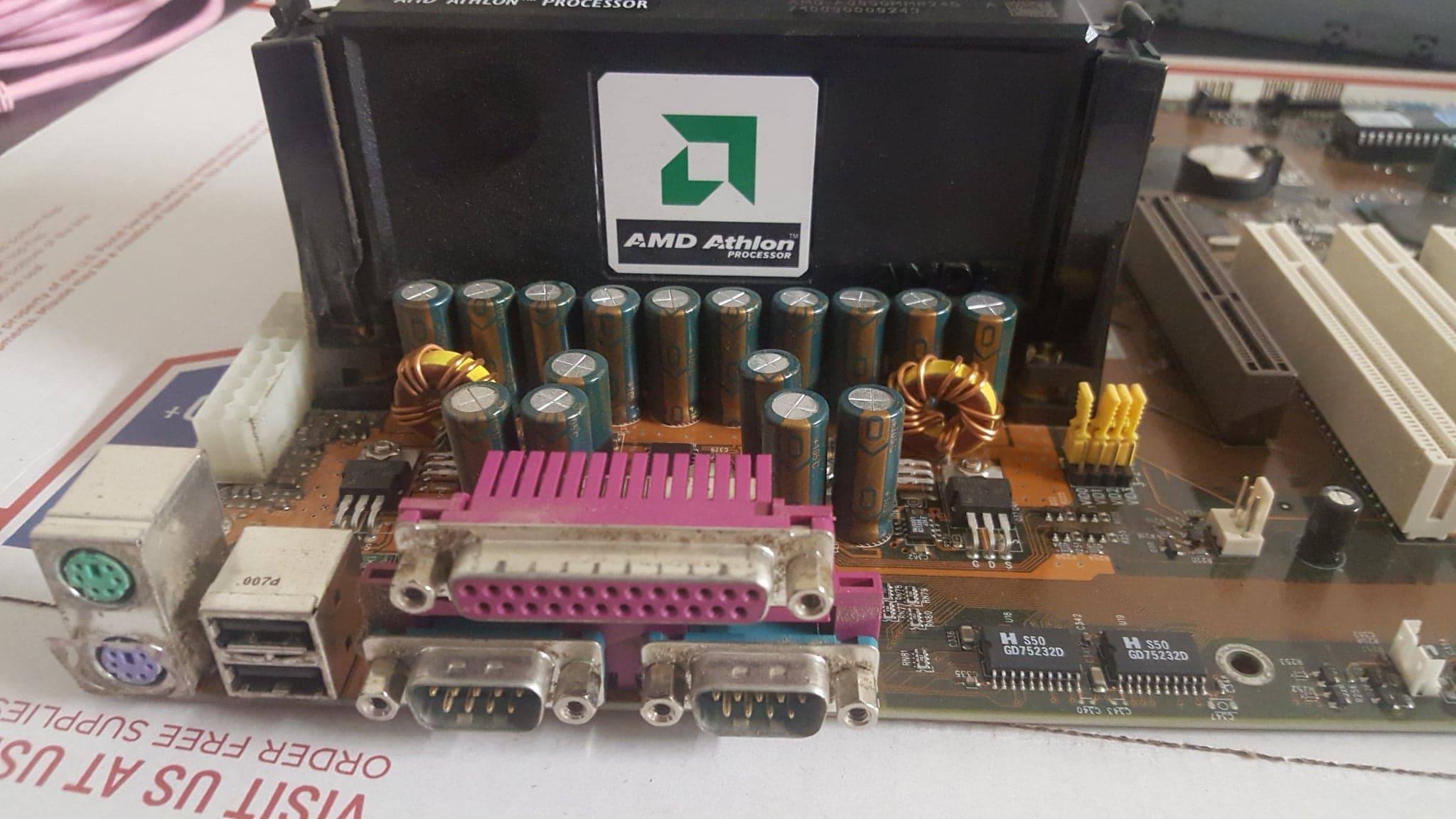 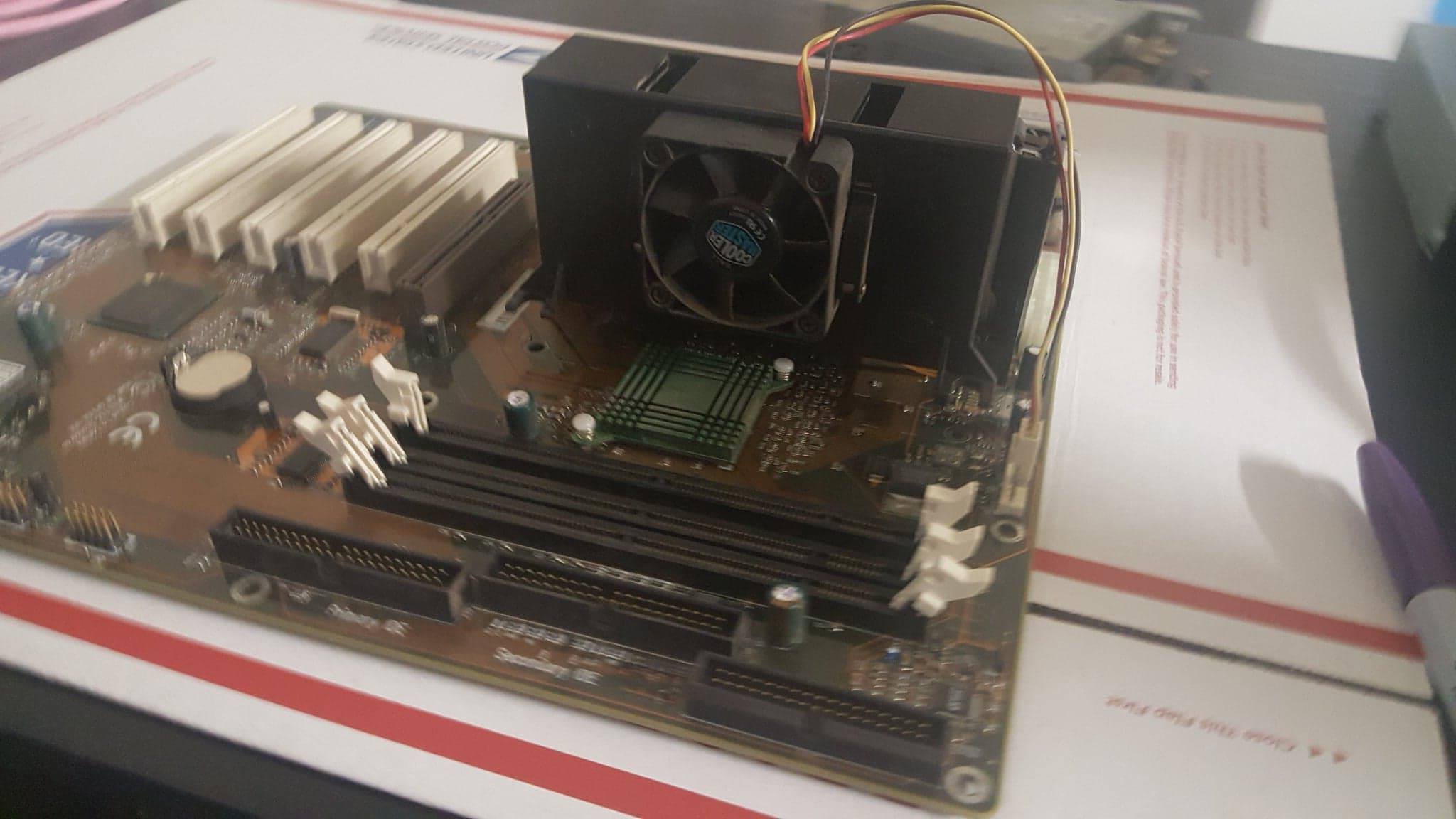 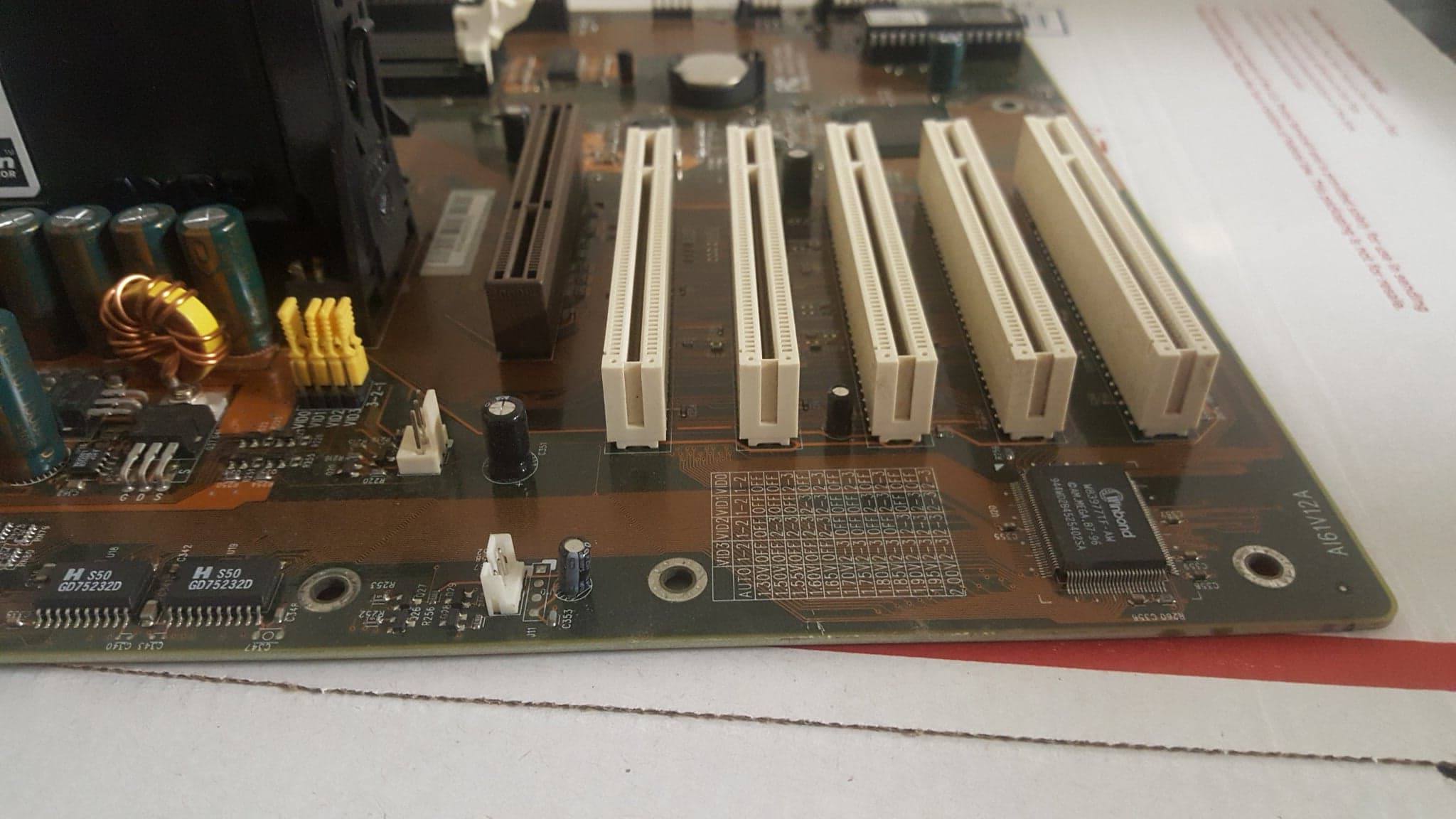 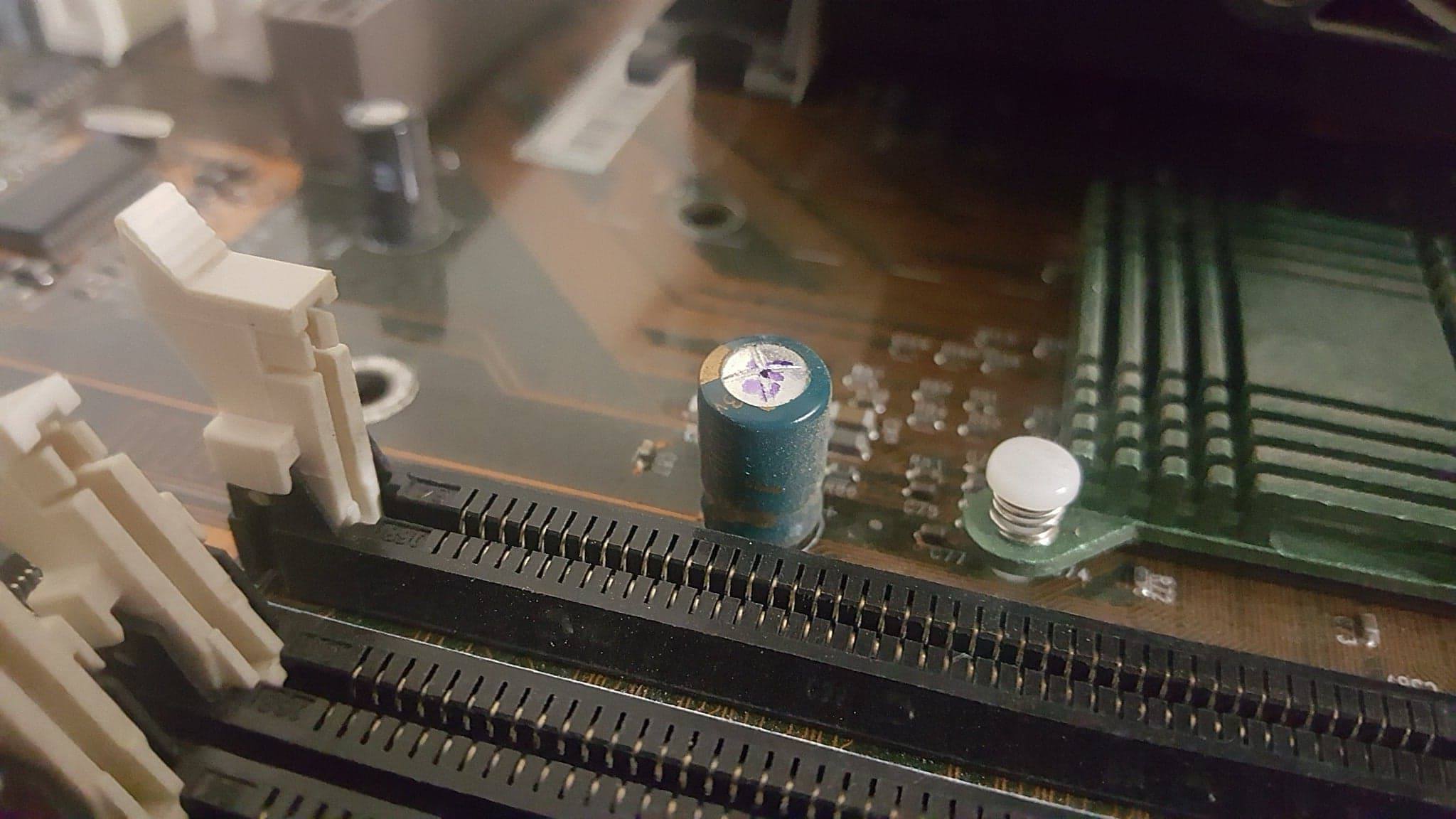 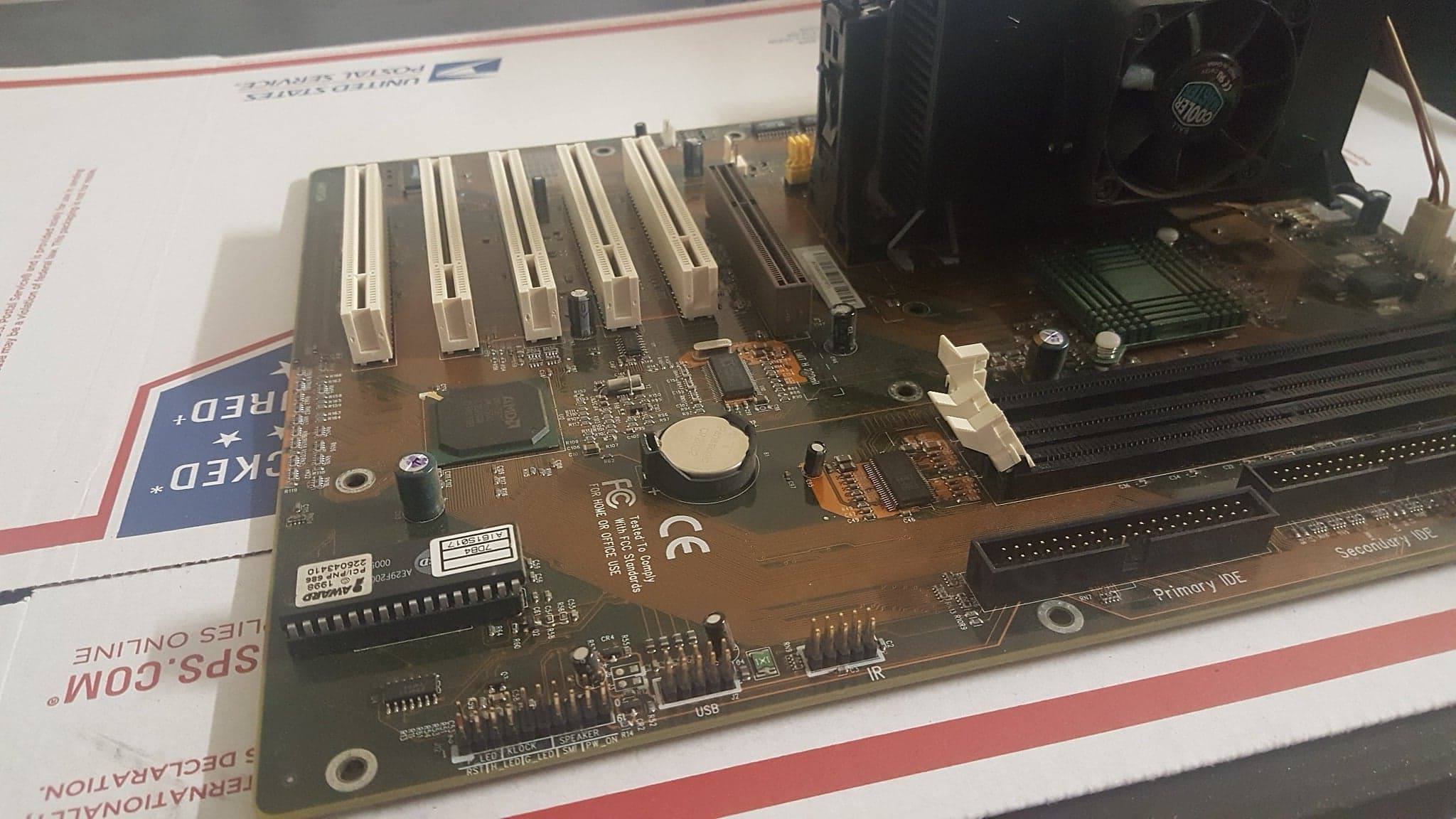 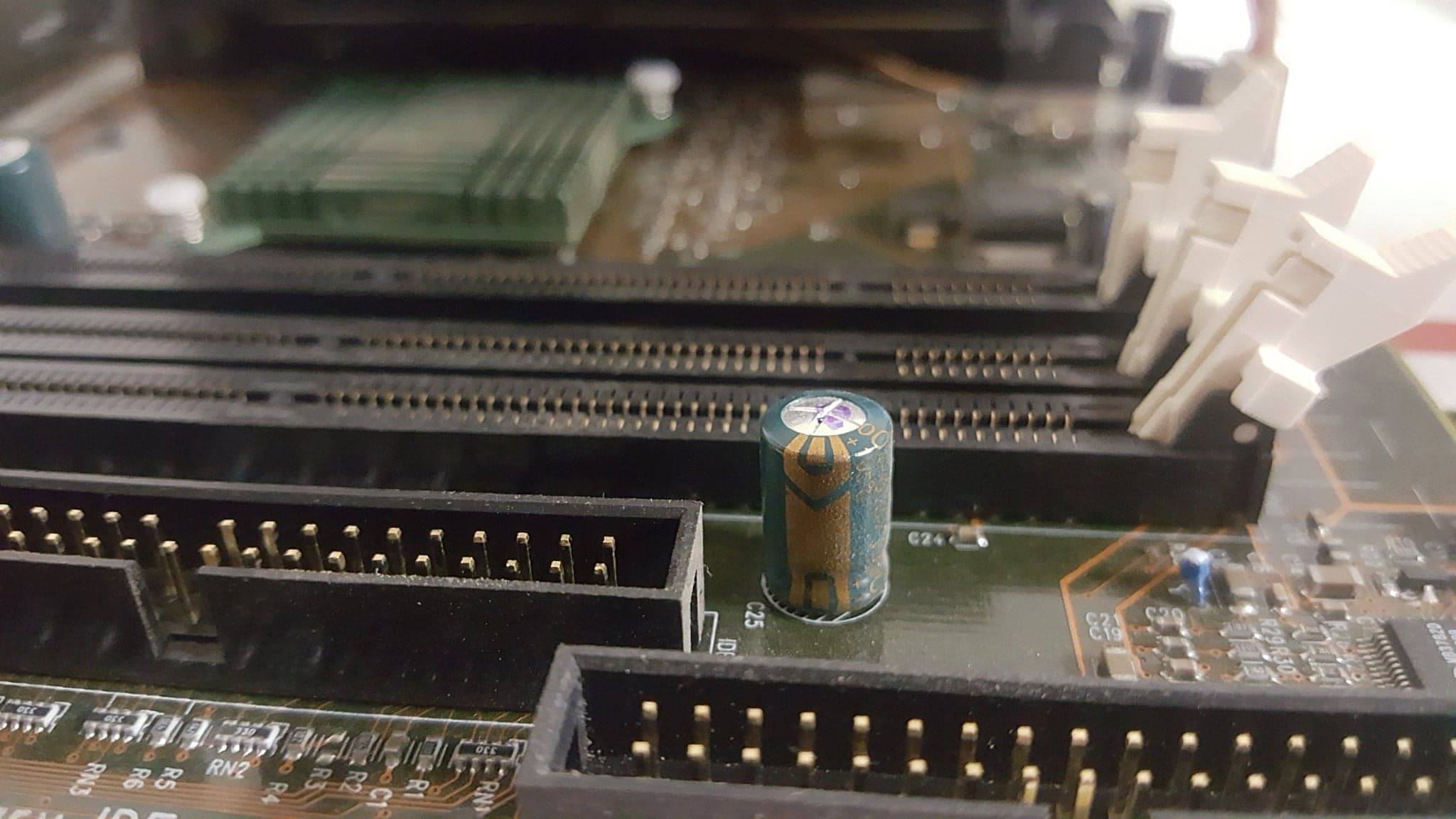 We make parts for IT & A/V professionals that connect, convert, extend, split &...

We make it easy for IT professionals to identify, find and get the hard-to-find connectivity parts they need to enable their business solutions.

Have an interesting range of “odd” hardware, things like Drive bay adaptors and weird power converters cables. All sorts of things that link this to that in a way you had not thought about. It’s hard to explain and I know I’m not doing a good job of it, sorry.

Or a IDE to SATA adapter

Connect 2 SATA hard drives to an IDE motherboard or card

seems like a possible resource to explore. I’m increasingly leaning toward using a sata to IDE adapter since SATA drives are such a cheap option.

Make sure you replace ALL of the high value electrolytics, even the ones that don’t look like they are bulging. As I stated before they are likely dry even if they are not bulged. Sometimes they also leak through the rubber plug under them which can’t be seen until they are removed.

If you have not done this before note that the PCB has a large ground plane which literally soaks up the heat from your iron. I find it is easier to do this by using hot air to preheat the entire area, and then use the iron to add the extra thermal required directly to the component.

If you don’t have one, you can get cheap Chinese ones on ebay for about $40 that work well enough for 99% of things, ie:

Ignore the brand, these things are sold as many brand names, but the model is the same (858D), it’s just mass produced OEM. Don’t try to remove the part with it… you risk burning the board, melting things, or removing parts you don’t want to, just use it to preheat the area up to around 200C.

Many people say to ‘walk’ the capacitor out, by heating a leg, and pushing over, then heating the other leg and pushing it back. While this will work most of the time, I have had many people bring me boards to re-cap they have killed by using this procedure. The problem is that you can either damage or completely remove the via (the inner plating of the hole) through the motherboard, disconnecting the cap from the inner layers.

At one point we had about 200 MSI boards all with this same faulty cap fault, it was so bad we refused to sell them. We literally had PCs coming in that were full of confetti from exploded caps. 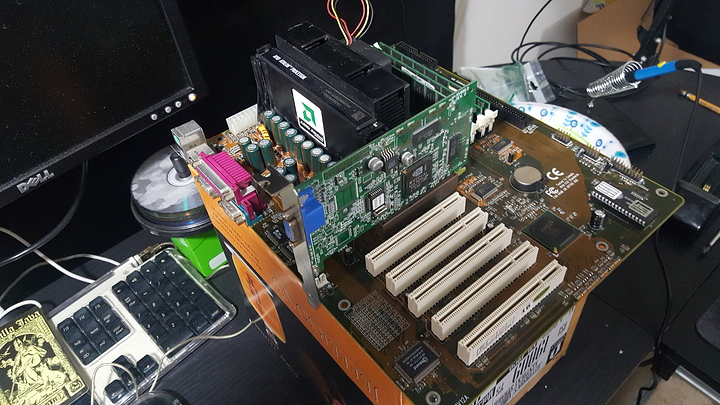 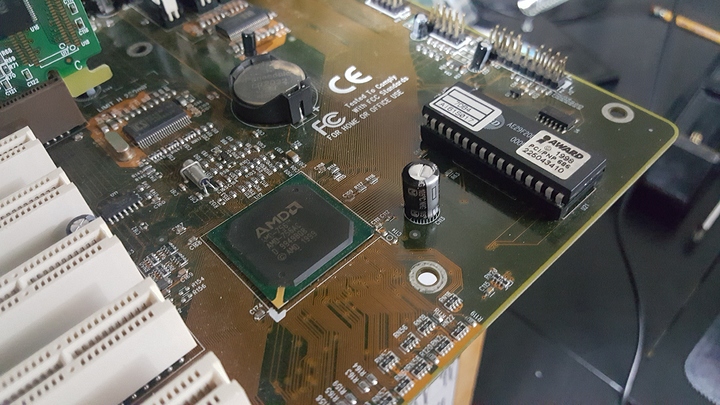 So after more than a year I got back to this project. I finally desoldered the old caps and replaced them. Tonight I will test boot the board using an old psu I have. I’d like to get a new psu as a replacement. But will a new psu actually work with this old board?

A Modern psu might work but it depends on how much power that system needs. I think that one draws most of the power from the 5V lane, which modern psu’s are neglecting.
Another option is to look for P4/AMD rated psu’s, that are still sold new to enterprise and can be found for 20-30 bucks usually. Those will have enough power going throug the 5V lane, usually around 30A is good, less might do it if your system doesn’t draw that much power… look for combined 3.3V + 5V rating of around 150W or more, altho 120-130W might be enough, especially with that gpu in there.

definitely keep us updated if you get around to it. I wish I had a old copy of Computer Shopper around just for ideas. 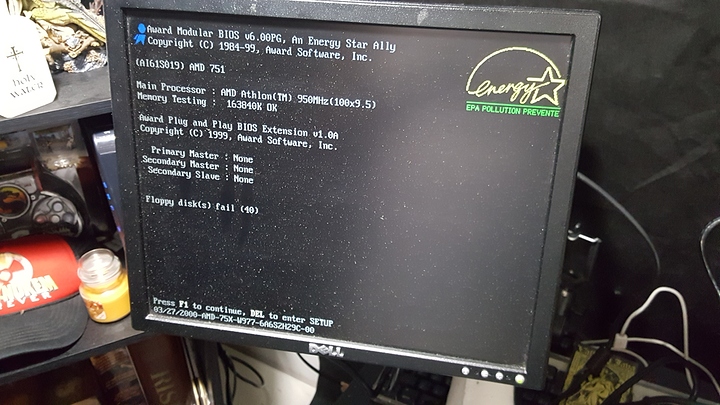 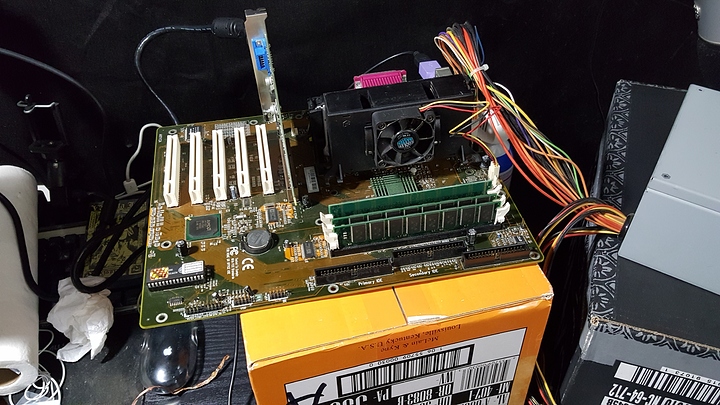 Success! Looks like the cap replacement has fixed the faulty dimm.

Most old PSU’s die from a blown cap also

Updates are coming for sure. I have a RIVA TNT2 M64 in the system now (pretty sure everyone has one or two of these lying around. I’m actually not disappointed with that as a starting (and maybe ending) point for the system graphics. Probably going to go the SD card rout for the HDD, and a floppy disk emulator for the floppy drive. I have a box full of compatible optical drives. I’m hoping to replace the cpu fan with something new. We’ll see where the road leads.

If you can find a VOODOO2 and a TNT2 (or maybe Geforce/GeForce 2) you’ll have the best GPUs for every game of that era. Some things back then ran WAY better with GLIDE, but a TNT2 or Geforce is vastly a superior card. You really want both options for that era though as a lot of games from that era (and slightly prior) were just SO much better with GLIDE.

Second the re-cap notion. Old boards have old caps that may leak or otherwise die and that may well be the cause of your DIMM slot issues.

Also, if you’re going to be running DOS era stuff as well - see if you can track down a Roland MT-32. If your only experience with MT-32 sound is via emulation (a GUS, or SB card or whatever) - do yourself a favour and google Roland MT-32 DOS music. It’s SO good.

Either that or… ahem… find the roms and use MUNT.

All of the DIMMs are functioning now. It looks like the damaged caps that I replaced were definitely the problem. I want a voodoo 2 for sure.