It’s that time of the year again!!!

Let’s get the bureaucracy out of the way first:

I, Mircea Anton, will participate in the next Devember. My Devember project will be “PiPDU”. I promise I will program for my Devember for at least an hour, every day of the next December. I will also write a weekly public devlog and will make the produced code publicly available on the internet. No matter what, I will keep my promise.

If the name is not suggestive enough, piPDU is a smart PDU, powered by Raspberry Pi and Arduino. I intend to build it and mount it in my Home Lab rack.

This project is basically going to dust off my Arduino/Raspberry skills which I haven’t really been using lately and hopefully get a usable product by the end of it!

Some rough requirements for this project are

I want the controller and the PDU itself to be separate entities in a client-server relationship so that i can eventually expand this and maybe make a discord bot or mobile app or whatever else to control the pdu as well.

I did not know initially if devember was going to happen or not, so i started the blog post series on my own website as well. I think I will run these 2 in parallel.
Link to my website here

Week 1 overview posted on my blog: Devember 2022: Planning is Essential, but Plans are Useless · Mircea Anton

Finally, week 4 devlog is up on my blog: Week 4 - Ho-Ho-Holidays are here · Mircea Anton

This week has been quite chill.

Can’t immediately tell from the blog or the repo, what hardware are you using for the current/power measurements and are you using any external pin controller/pin muxer. (looked from my phone while on the go and couldn’t find a pdf or something I could open easily).

I was imagining how something like this might use esphome on esp32 with a bunch of mcp23017 daisy chained on i2c, or maybe even a pca9685 if you want to pwm the LEDs on the buttons.

How does current/power sensing work?

Hello, @risk ! Thanks for your interest in the project!

Yeah, I did not spend too much effort on documentation yet. I hope to do that in the coming weeks this month, as I flush things out more.

So the way things are set up right now is that I have 16 ACS 715 Hall Current Sensors wired in alongside the 16 relay board in order to measure the current. 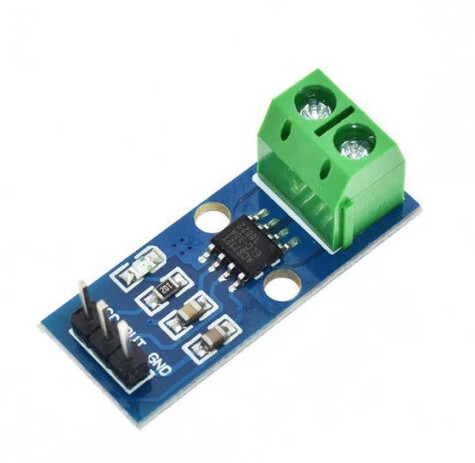 These sensors, alongside the relays themselves are then controlled by an Arduino Mega. The Arduino then in turn communicates via i2c with the Pi zero to complete the circuit. Basically, the Arduino interacts with the hardware itself and the Raspberry simply hosts the API server and communicates with the Arduino.

Now, it would have probably been a better design to get some I2C GPIO expanders and I2C ADCs and use those instead of the Arduino Mega, but I had that lying around so I tried to use as much of the parts I already had as I could.

For the buttons and LEDs, I am using a Pi zero again. It has just enough pins so that I can individually address the LEDs and use the buttons as an 8x2 matrix. The LCD in the controller is communicating over an I2C bus.

Week 5 of my devember project (technically week 6 but i took a week off for the holidays) is live now!

N/A, had to take care of some university assignments

Devlog for week 6 is also up on my blog: Oops, I did it again · Mircea Anton

A bit late for this update, as well, but I am slowly catching back up.
Spoiler alert: week 7 has more interesting things coming up!

This week I was very busy with uni work and other projects so only 2 tasks got done:

Not a whole lot but hey… progress is progress…

PS.: week 7 update coming soon, i am in the works writing it

Devlog for week 7 up on the blog: Back on track! · Mircea Anton

Slowly starting to get back on track, but it is getting awfully close to the deadline and I am not done yet

And here goes the last week of devember 2022!

Detailed post with updates for this week, as always, up on my blog: We almost made it! · Mircea Anton

As a final update, I unfortunately did not manage to accomplish all I set out to on time, as I still have to do the final assembly for the server case. That being said, I did make a lot of progress on this project and I am happy with it nonetheless.

I would like to thank the L1T community and team for setting up this challenge and would like to take this time to share my achievements for my Devember 2022:

To be fully honest, I could have probably finished this if i was more careful and didn’t spread myself too thin by setting too many goals, but I am always saying that it is better to aim for the stars and miss, as you will have gotten much further compared to aiming low and making it!

Overall, I am calling this Devember challenge a win! I hope you’ll tag along as I continue to work on this PiPDU project as I already have bigger plans for the v2, even if v1 is not really done yet

Expect another post on my blog sometime in the next couple weeks about that!

To wrap things up, I want to outline what has been accomplished and what is left to do for this devember challenge, based on the initial plan:

Frankly, depending on how long they take to rate the projects and pick a winner, I think I might be able to finish this, as there is very little left to do!