The problem is there are 6 total drives in raid 0. Two new drives (sn850) showed up at first but Asus tech had me delete in bios to try another array. Now drives are listed under physical devices but will not show up in windows. Tech is consulting with engineers overseas. Has anyone had this problem? 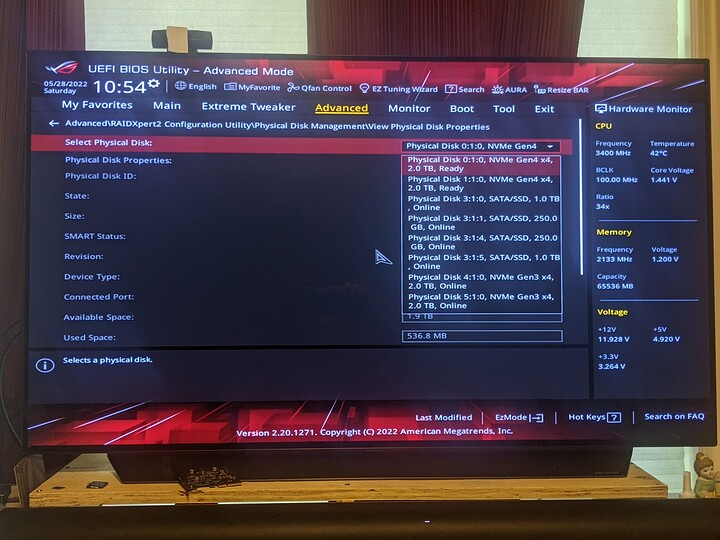 I think I know what’s going on.

Important question before I give any advice: Is Windows installed on an AMD RAID volume on that system?

Everything was done using raid expert in BIOS

Strange thing is Im not sure what kind of raid the SATA drives are. When I tried to get the bios to do raid it would fail for sata drives, then I noticed in windows those 4 drives became two.

When I inserted the new drives sn850s into the Asus hyper pcie. They initially showed up as two separate cards, which is what I expected. It’s when with an Asus tech on the phone with me went into bios to create another RAID 0, the option was greyed out. So we did a number of things including removing the drives and then reinitializing. Problem is they don’t seem to be reinitializing. I enable both and but yes to reinitialize and it instantly finishes. If I go back in the same menu, it will have the same message to Initialize disk. In referring to raid expert in BIOS.

I’ve tried switching the 970 plus drives to pcie Asus hyper card and sn850s to mobo. Samsung’s show as normal but 850’s don’t.

To be clear the 850’s show up in BIOS as “ready” but not online as the rest. Asus tech recommended installation in a separate PC which I will try later.

“Important question before I give any advice: Is Windows installed on an AMD RAID volume on that system?”

My answer to that is I used raid expert in BIOS on an AMD motherboard so I would assume yes? All data is backed up and can be wiped clean as needed. Currently I have swapped the 850’s back to Asus card and will test in a different PC. Not sure what that’s supposed to solve but will try it.

** Different PC made no difference

Happy to hear that you could solve it yourself!

I have some experience with AMD’s motherboard RAID software and encountered a few bugs, one sounded like the situation you had been in:

In this case I had to delete one of my volumes so that I could create a new one. I think there’s a specific number that can be created on x570