There are alot of threads like "Post Your Battle Stations" on this forum which allow users to post their computers, desks, gaming setups, ect. This thread is a new thread of a similar nature; with the goal of generating ideas based on the setups of other's home network setups.
Below is my example: 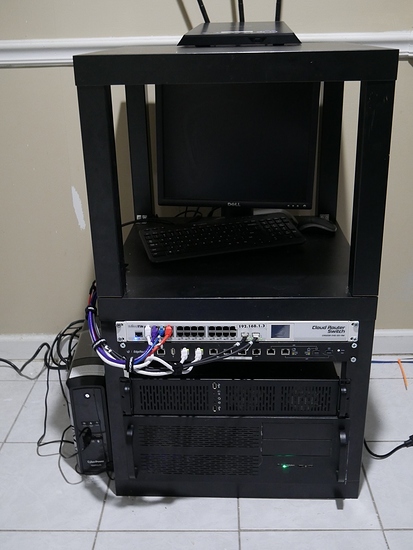 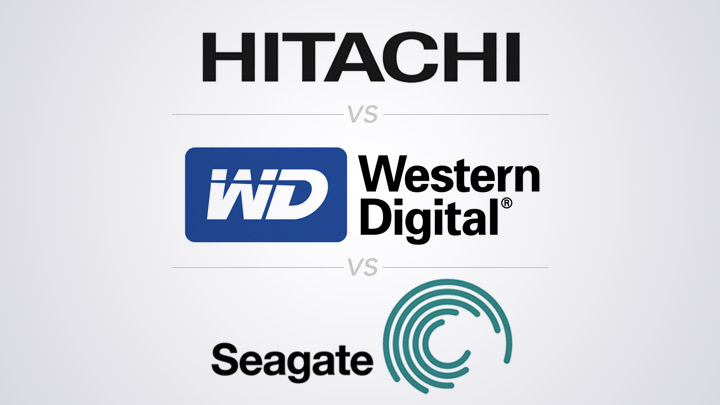 What Hard Drive Should I Buy?

My last two blog posts were about expected drive lifetimes and drive reliability. These posts were an outgrowth of the careful work that we’ve done at Backblaze to find the most cost-effective disk drives. Running a truly unlimited online backup servi...

New EdgeMAX software release v1.7.0 for EdgeRouter products has been released and is available from our download page! http://www.ubnt.com/download/edgemax/ (Please select the correct EdgeMAX model and select Firmware to see all available versions.)...

Motorolla Drop Amp
There is a complete description in the video below:

If I post mine, I'd just draw a topology in Packet Tracer or Visio.

I'd post mine, but I'm at college and I don't really want to go around my house taking pictures of what all I have, especially since I'll be adding a file server built from scrap parts here in the near future.

If someone wants to know, that white stick on the router is a Huawei E3276.
Basically for fail over if ADSL decides to crap out. Takes a couple minutes to do it's thing though, lol.

What I'm probably looking at next is a separate router and make the Dovado an access point.
After that, I don't know.

My network is all over the place.

The modem is on the 2nd floor, where the only access point is. From there on I run a powerline to the 1st floor, where I actually live.
Once the signal is downstairs, it goes to my D-Link DIR-655 router. That's connected to the PC which is in the living room and the NAS which is in the kitchen. (8 HDDs are too noisy for the living room or bedroom)

I got this finished late december, overkill yeah i know 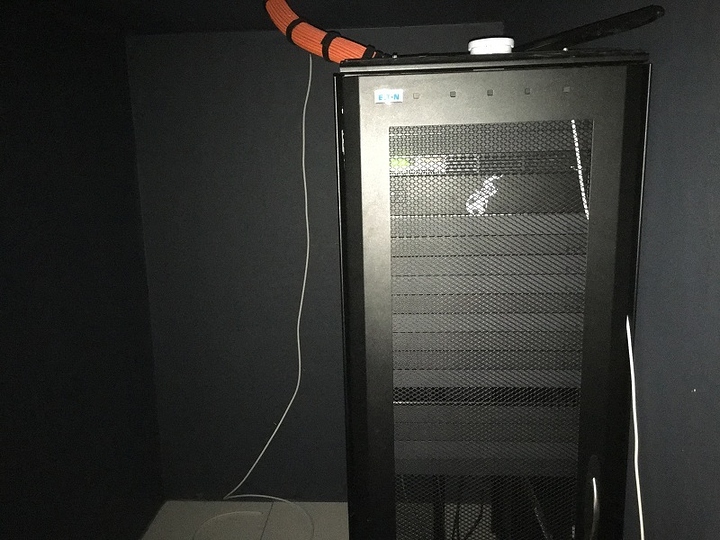 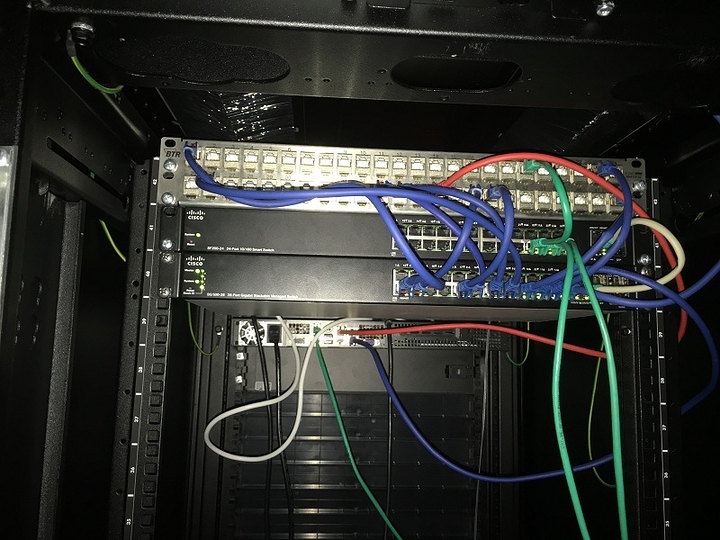 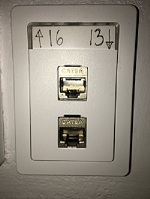 may i query the rational for that INSANELY awesome setup?

My network is a little overkill.

I've posted these elsewhere but why not post it again :P 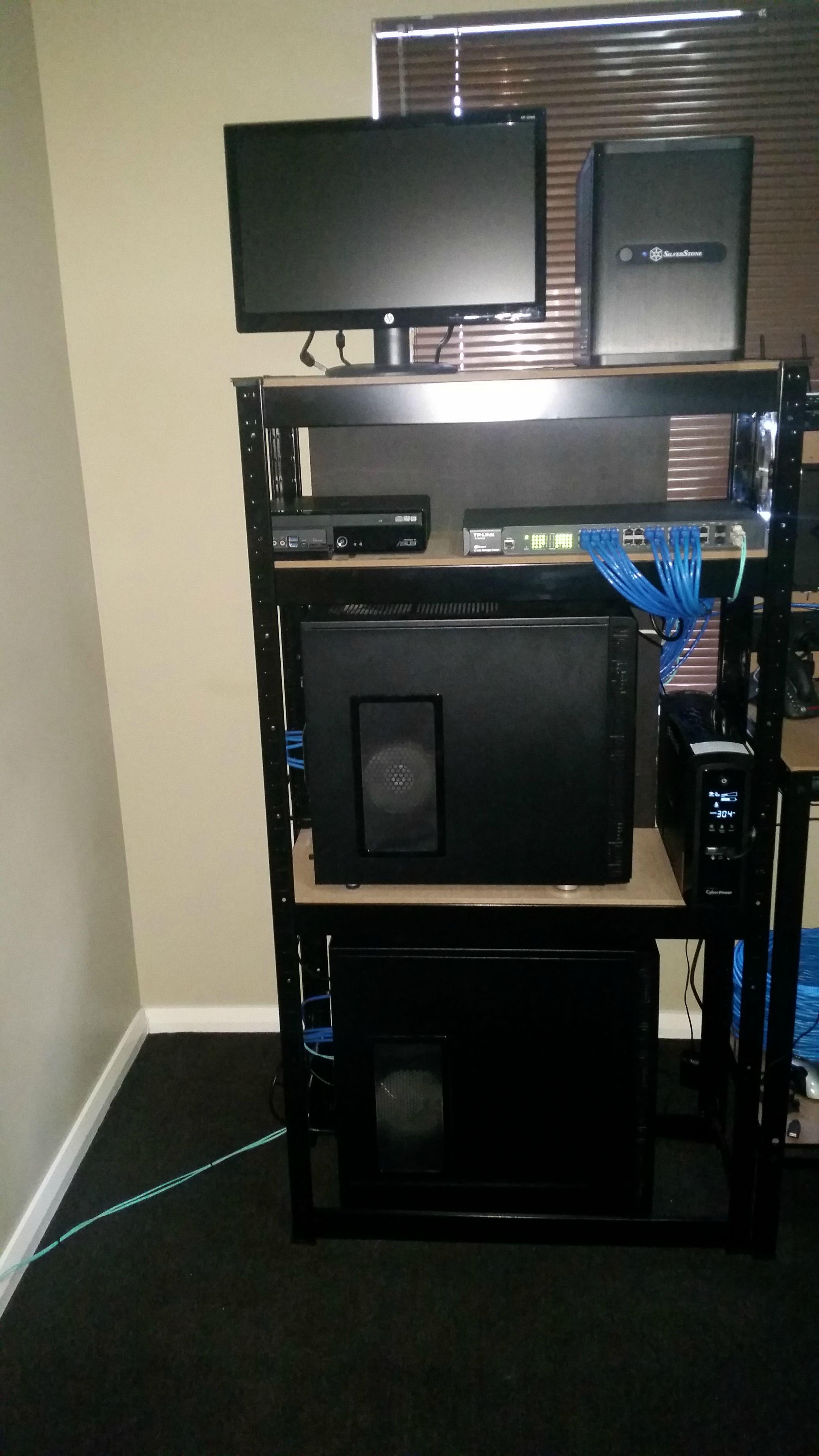 This is the server room where most of the network stuff lives. I have two TP-link jetstream 3 managed switches (one here and one in the other room), a pfsense router (middle box) and two servers with a total of 32TB of storage between them. They also run a bunch of VMs for different things. The two servers (top and bottom) and linked by a 10gbps fiber connection and the storage is pooled and displayed to the network as a single share. 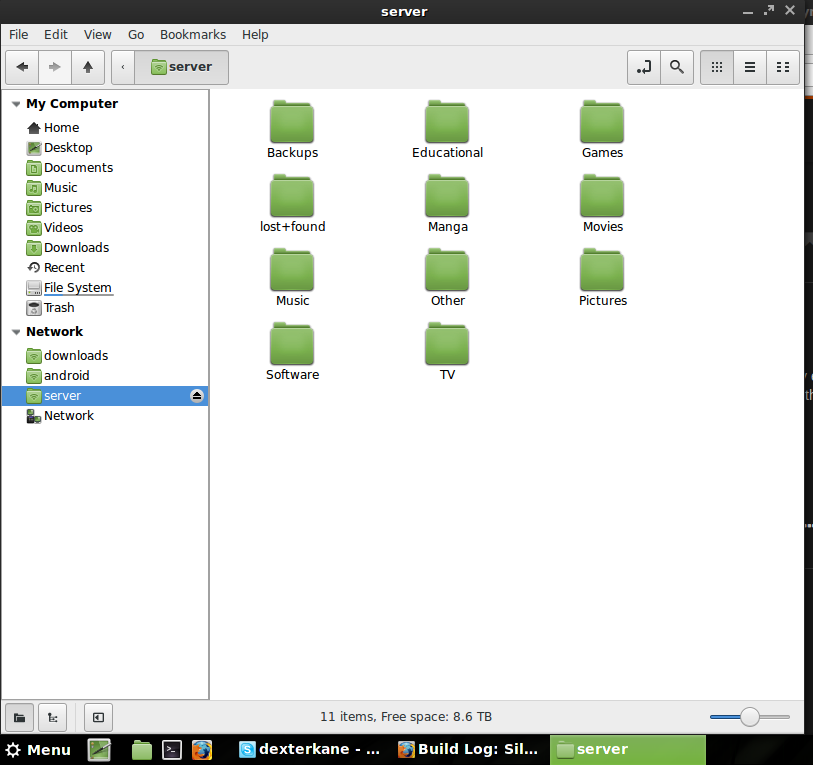 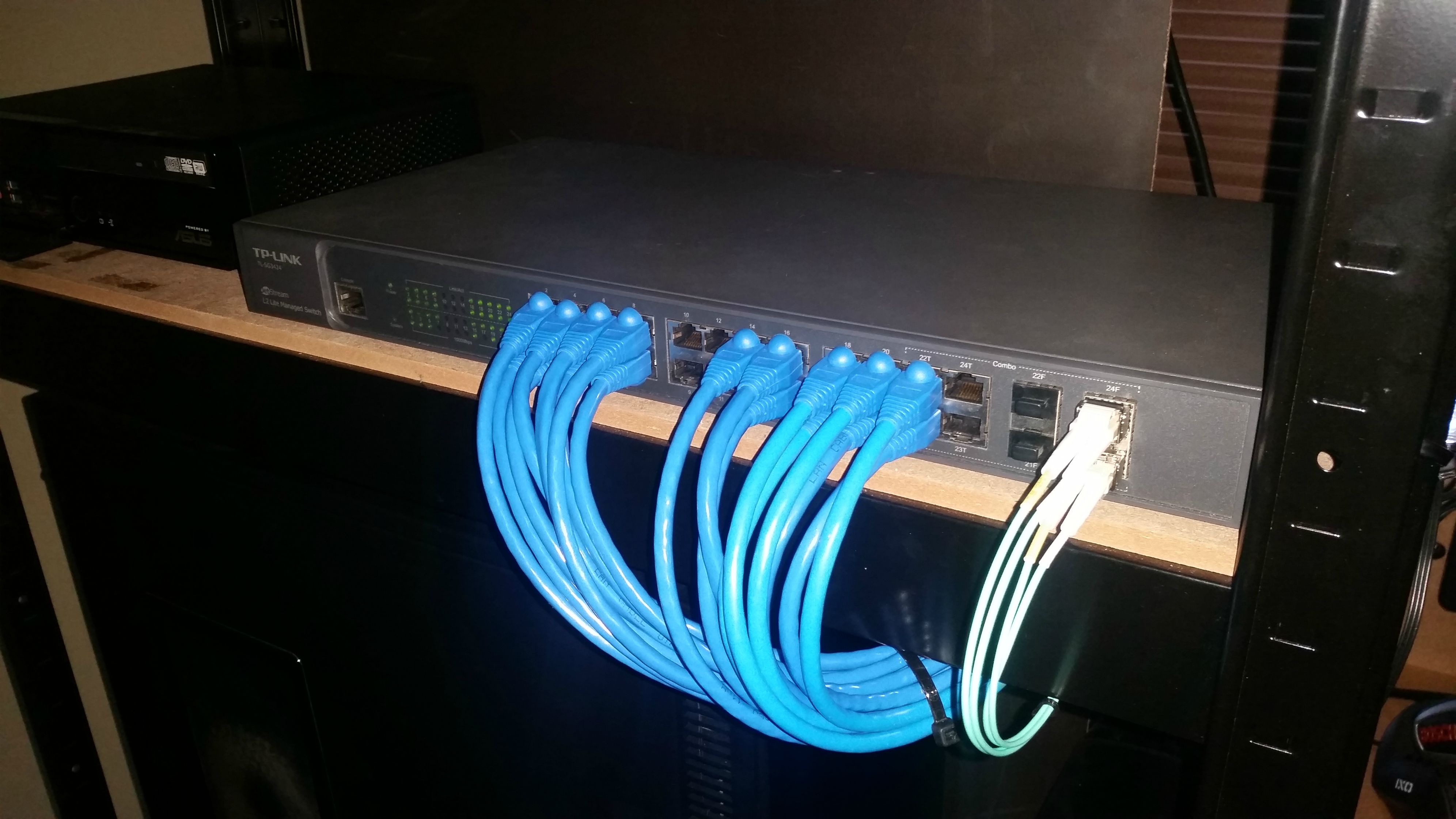 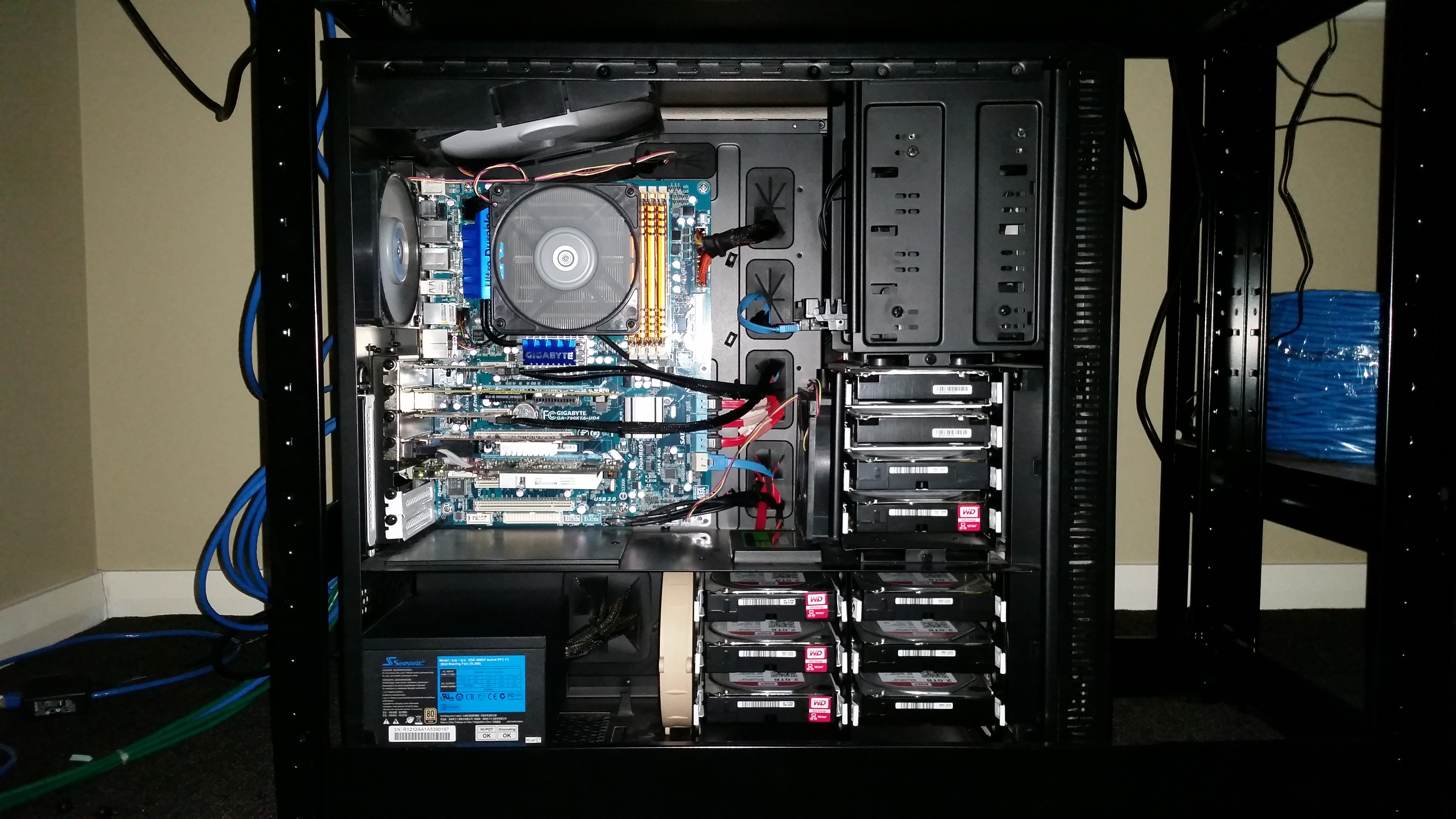 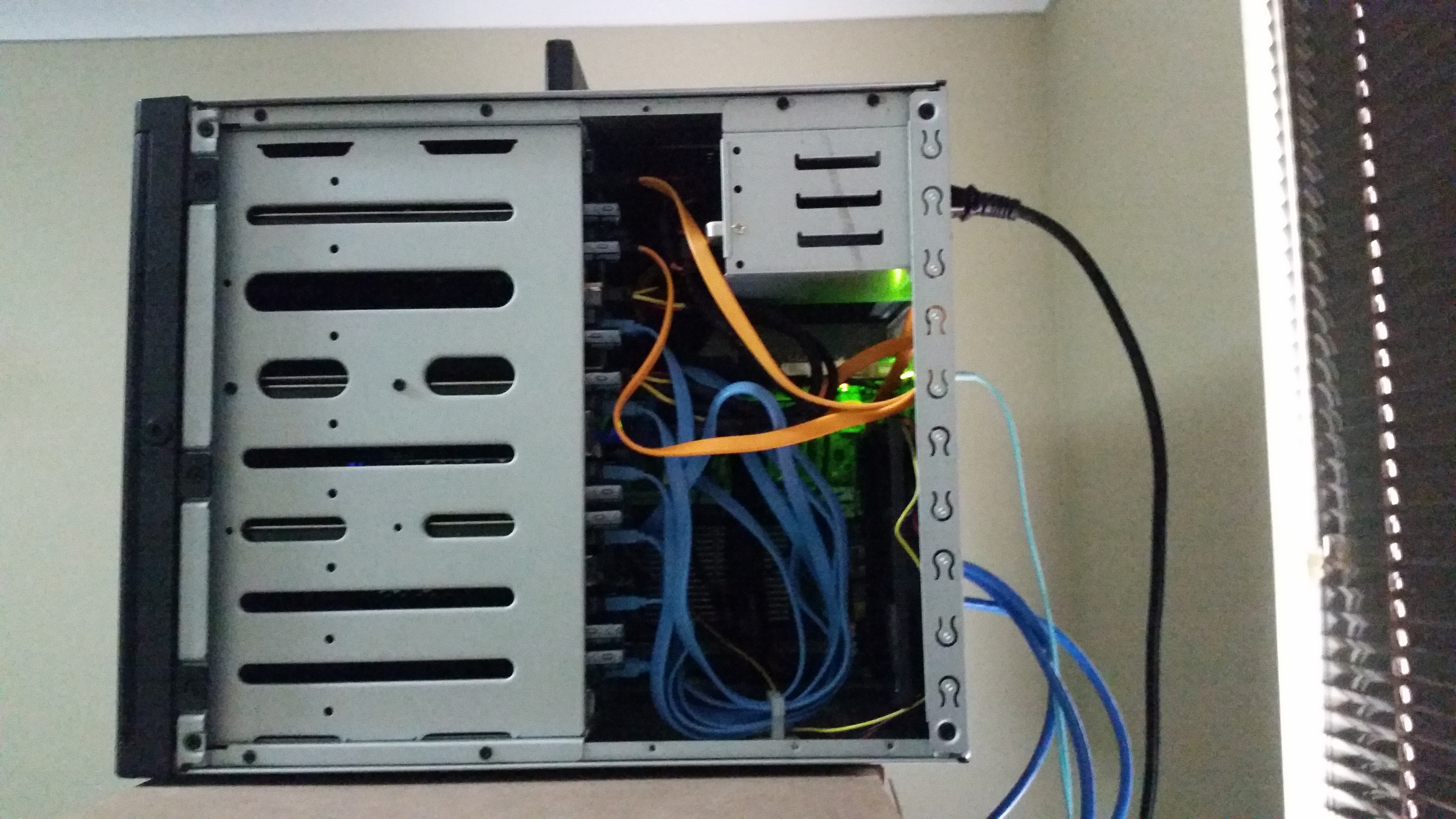 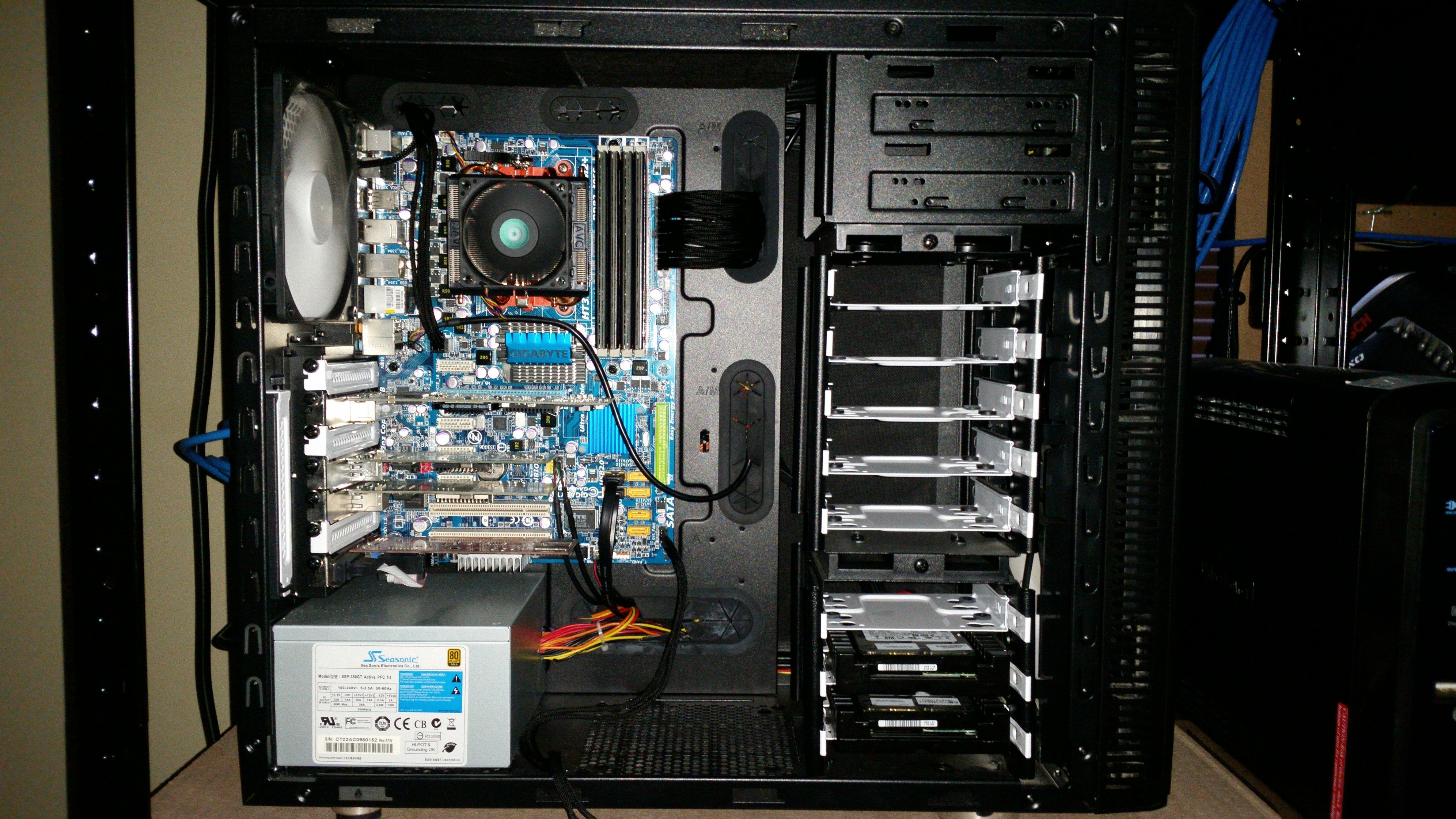 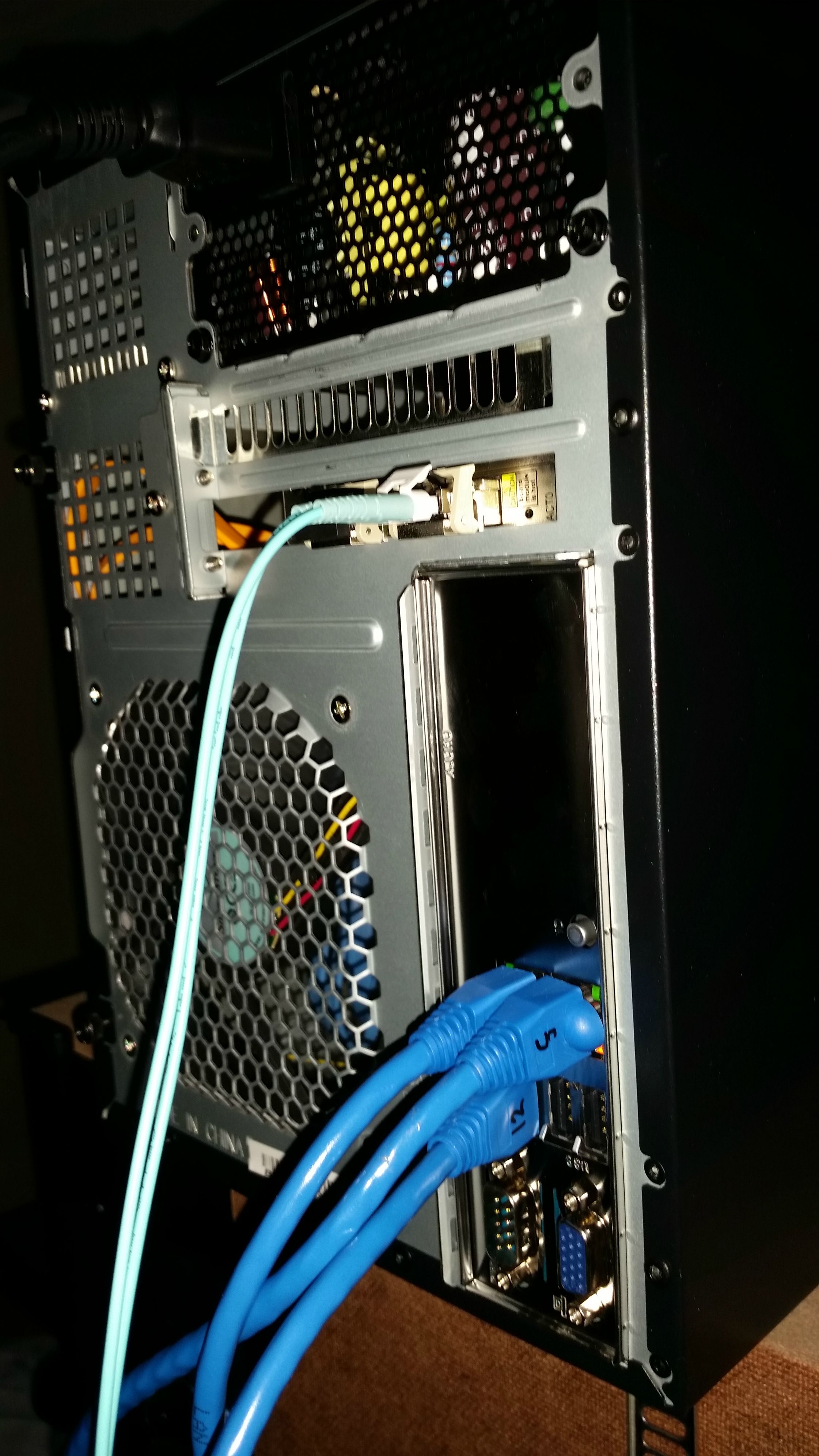 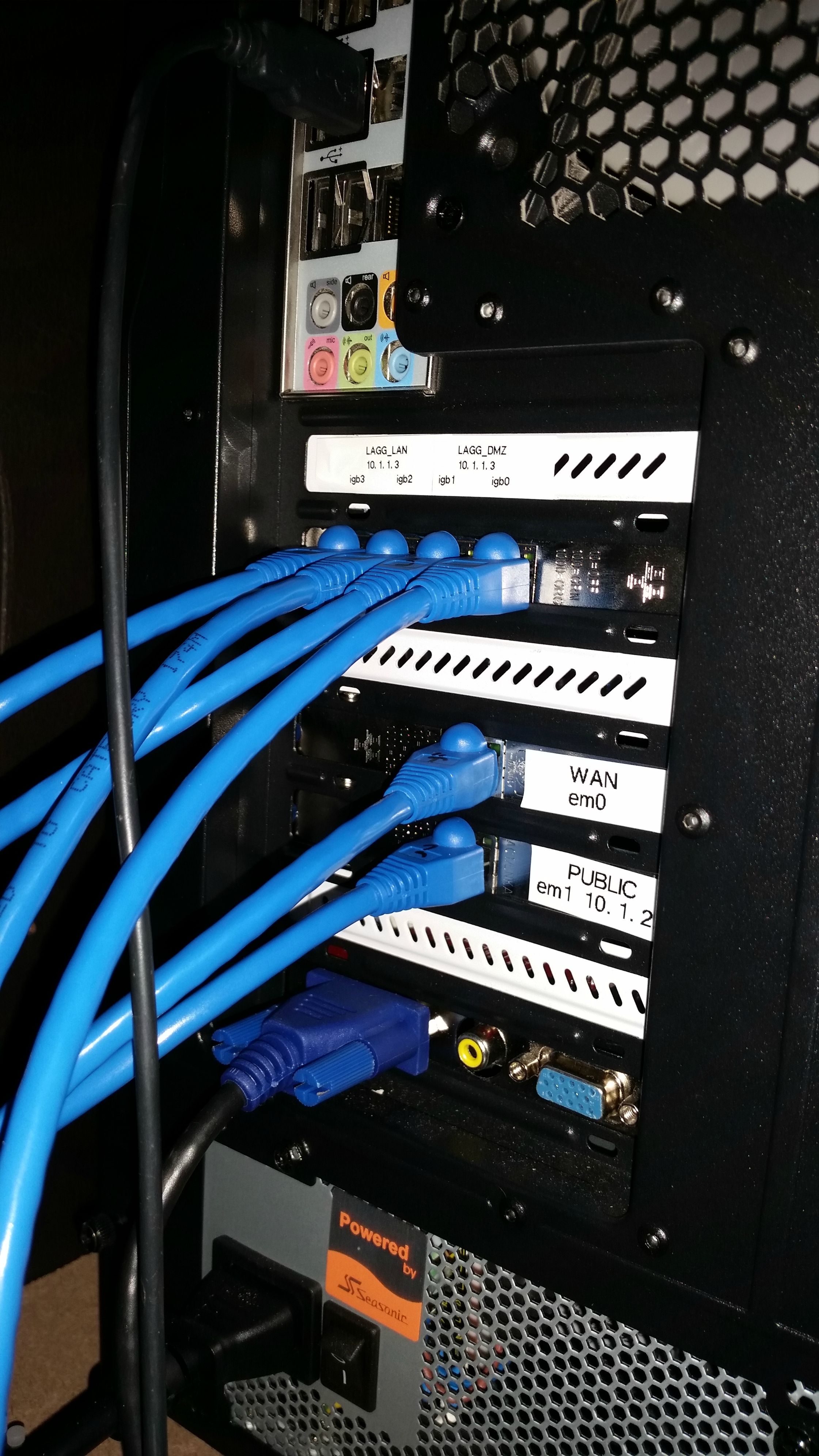 I know I've mislabelled the network ports, giving both LAN and DMZ the same IP. This is an old picture and the configuration has been changed so that these four ports are in a single link aggregation group for the LAN, DMZ and Wi-Fi VLANs. WAN and PUBLIC have their own ports so that they can be monitored using port mirroring on the switch, the mirror port is connected to a VM which I can run wireshark or whatever on 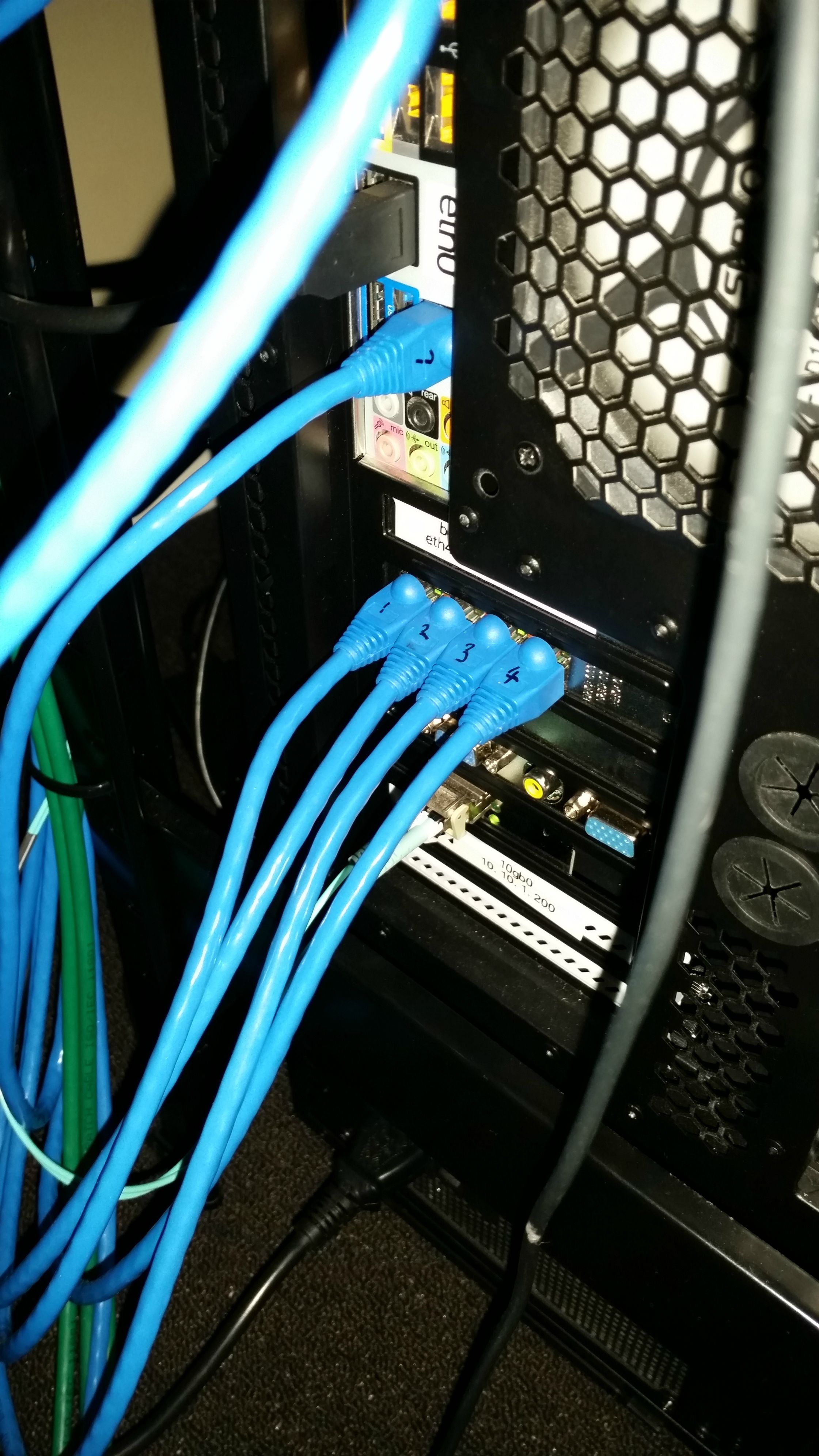 The two switches are linked by a pair of fiber connections in link aggregation that run between the server room and the lounge room where the other switch is. 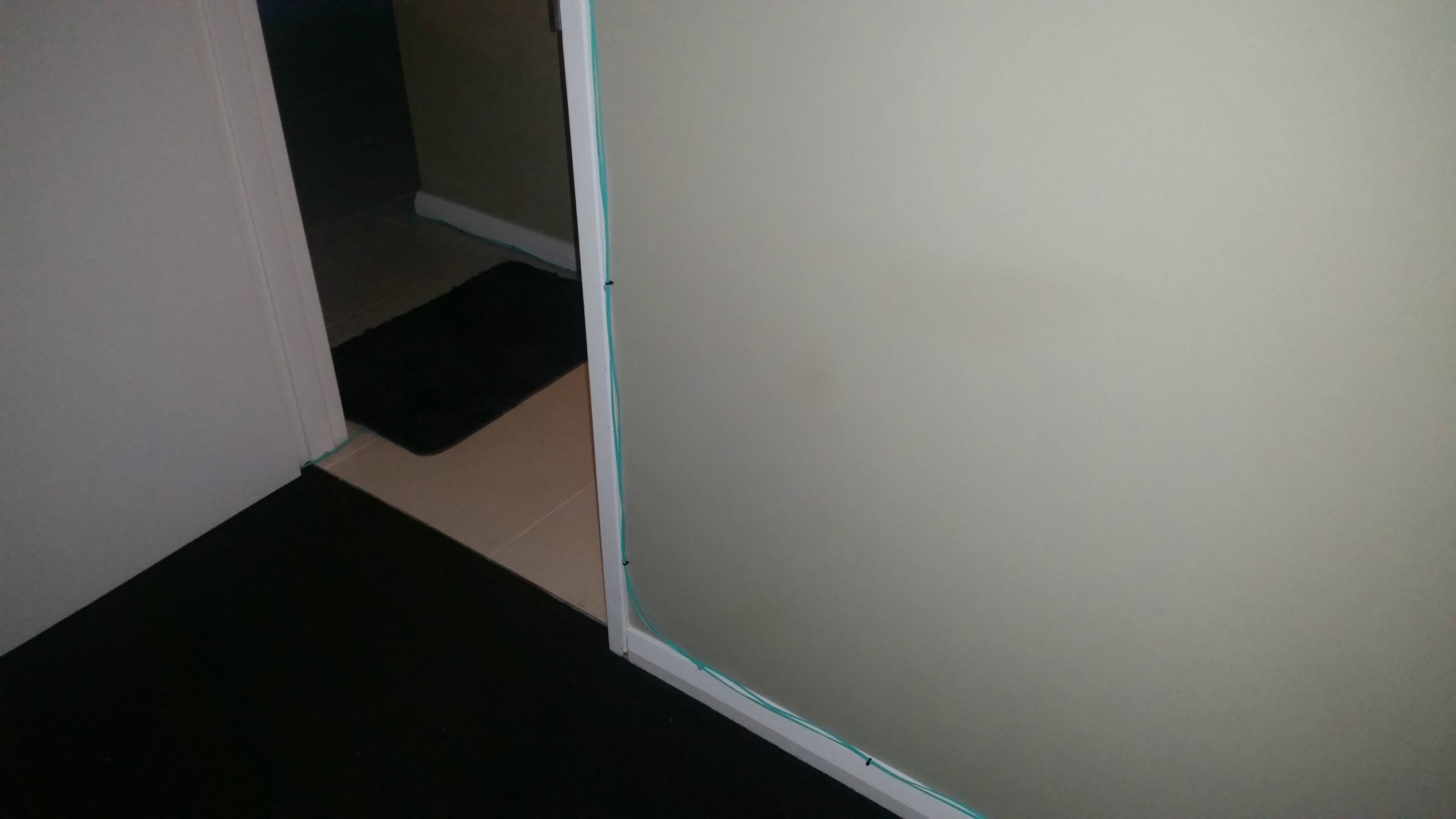 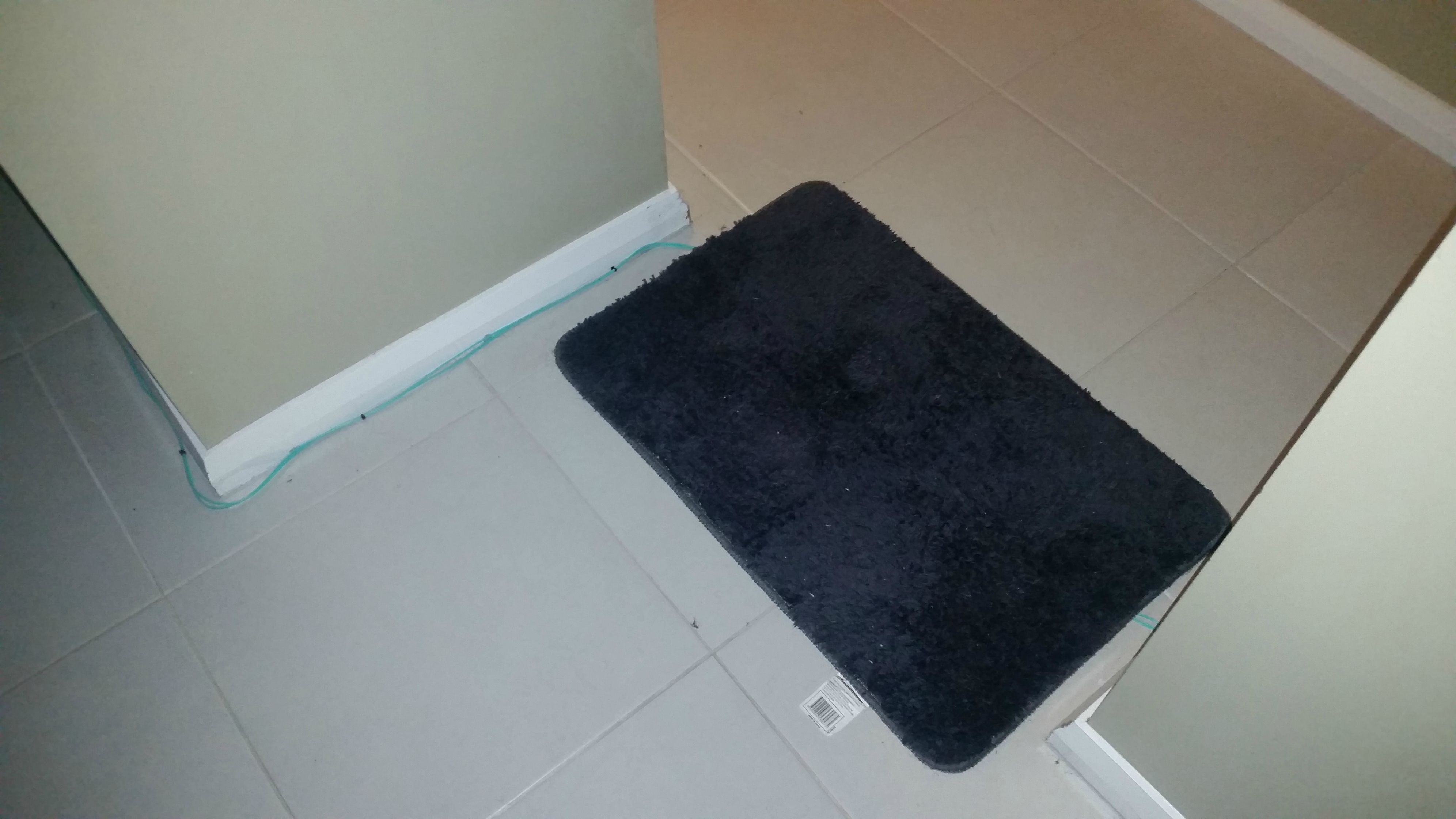 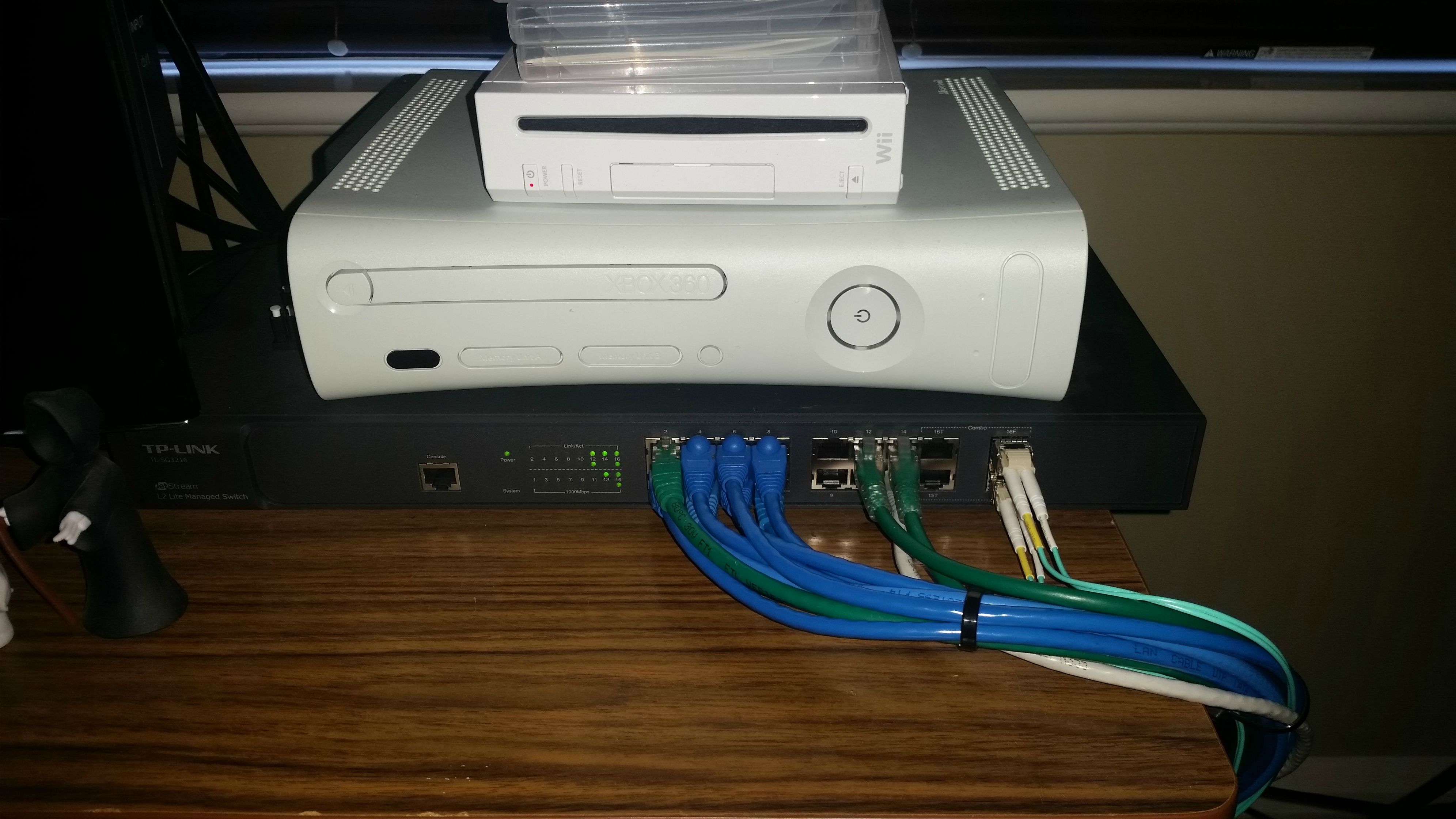 These two PoE injectors are for the AP and modem, this way they are connected to a UPS which keeps the network up if the power goes out. 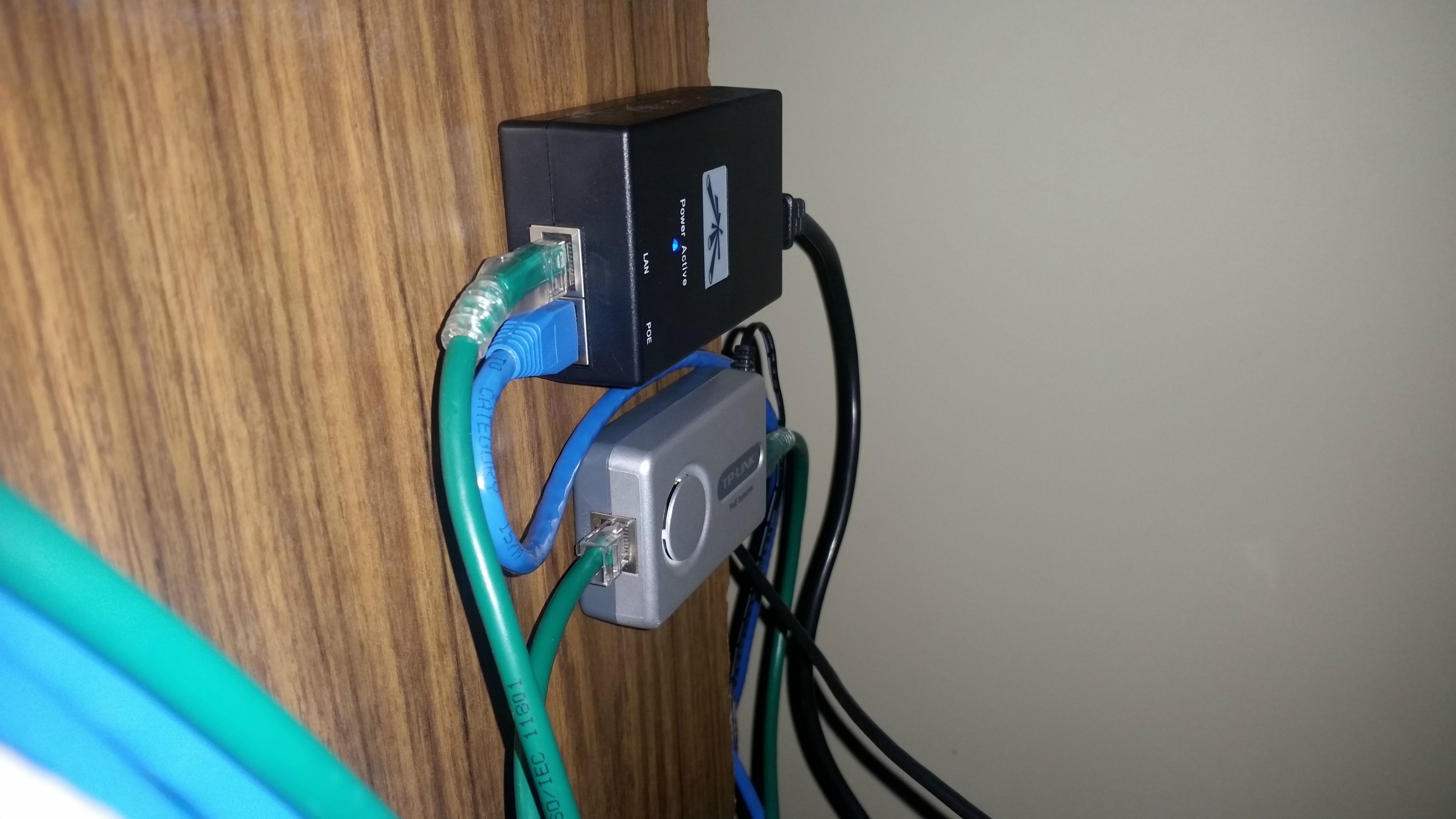 The AP is a Ubiquiti UAP AC 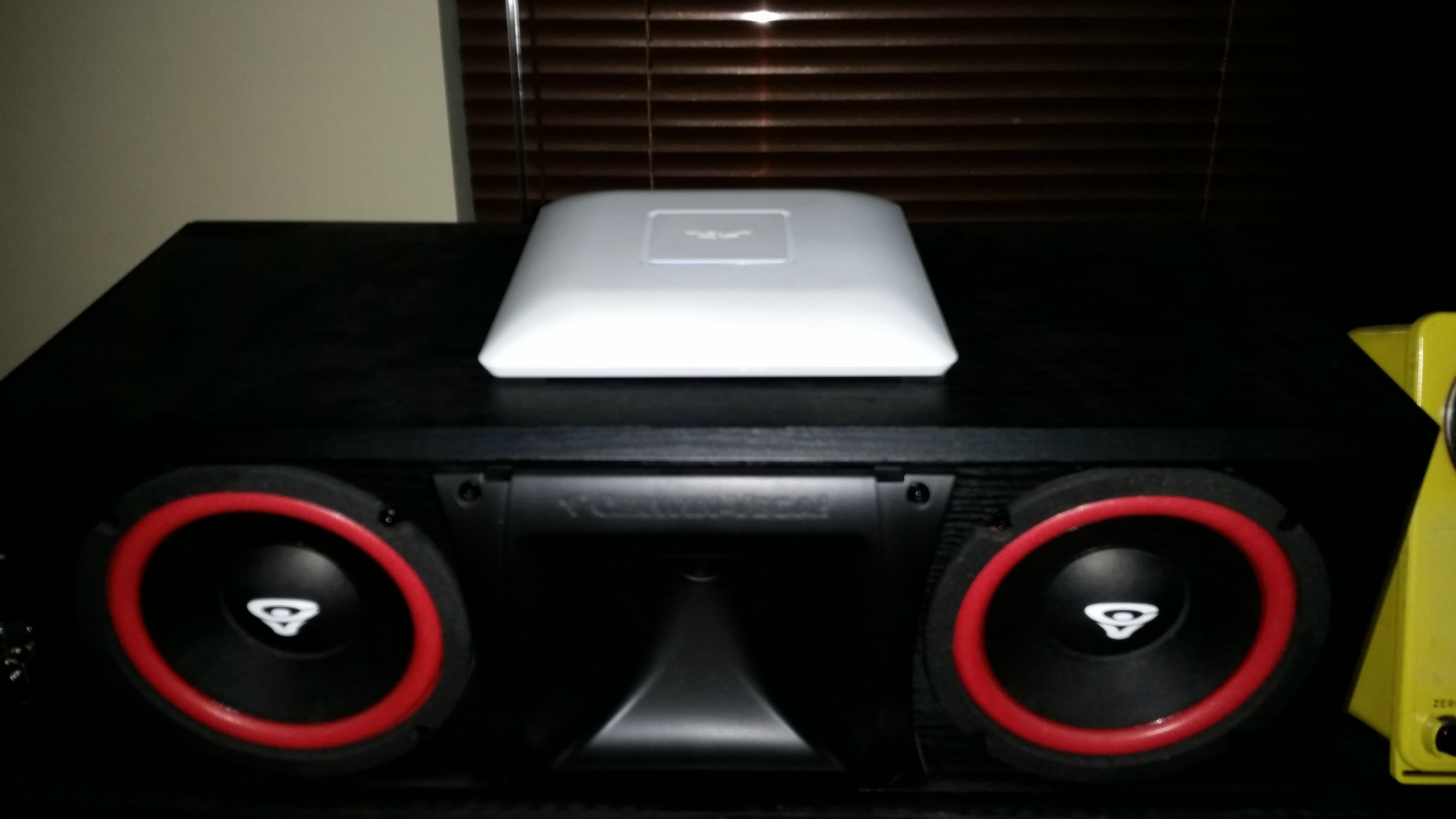 This is a router I'm using as an ADSL modem, It's bridged back to the pfsense router using VLANs over the fiber cables. The other connection going to it is for management. You can see how I connected the PoE receiver to it in the safest, least flammable way possible ;) 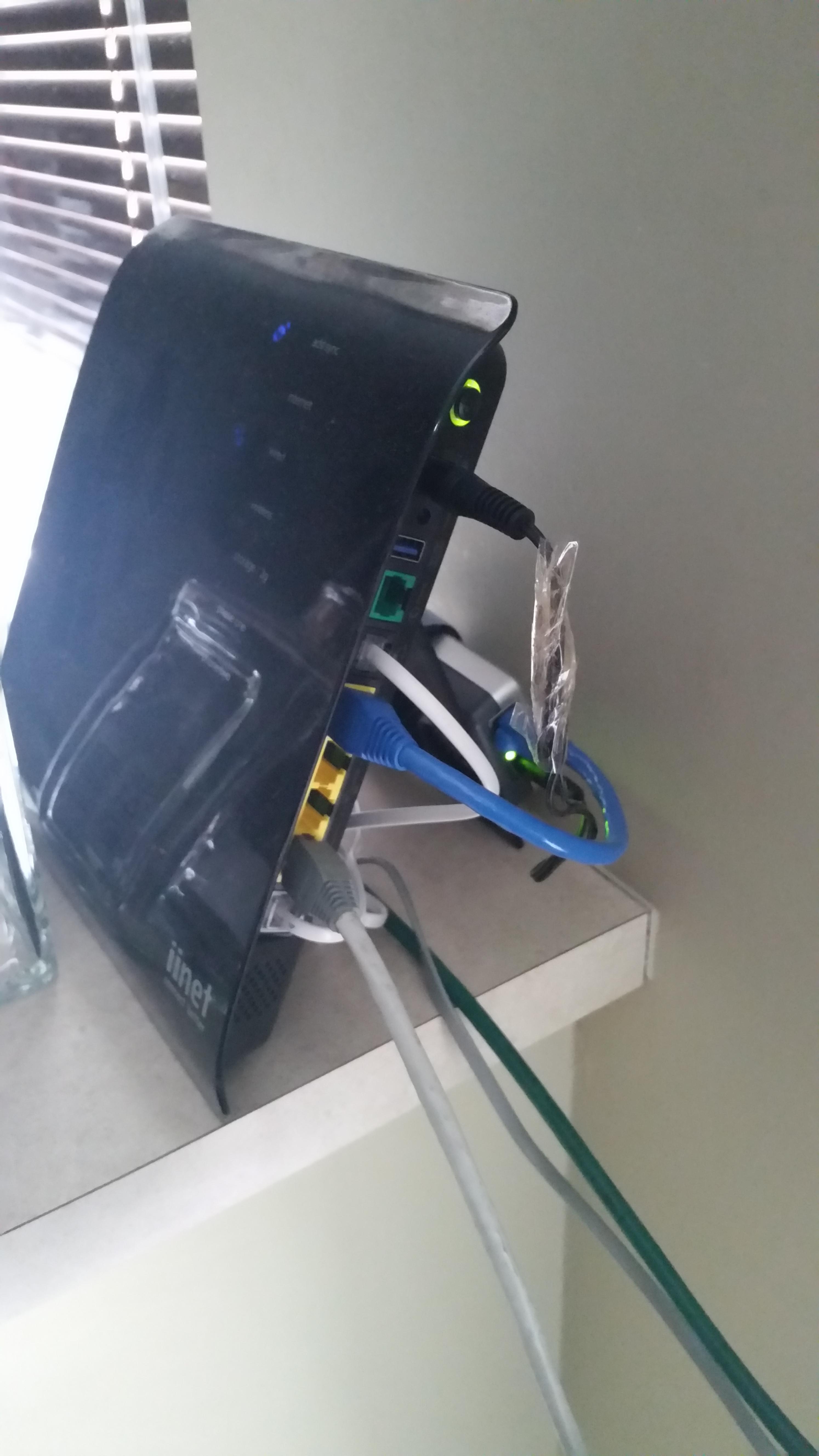 This is a network diagram that I threw together a while ago, it's a little out of date but still pretty much accurate. 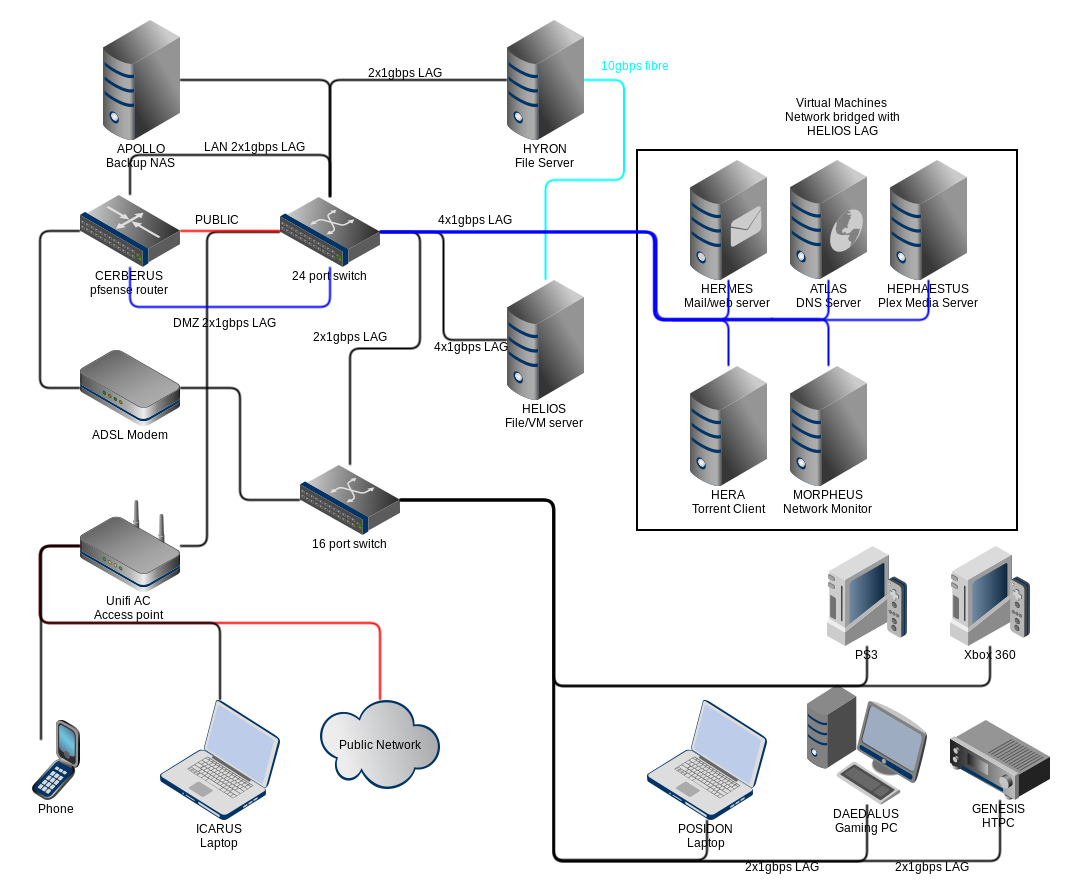 These are some notes I made while reconfiguring the network, they sort of show how the VLANs are configured 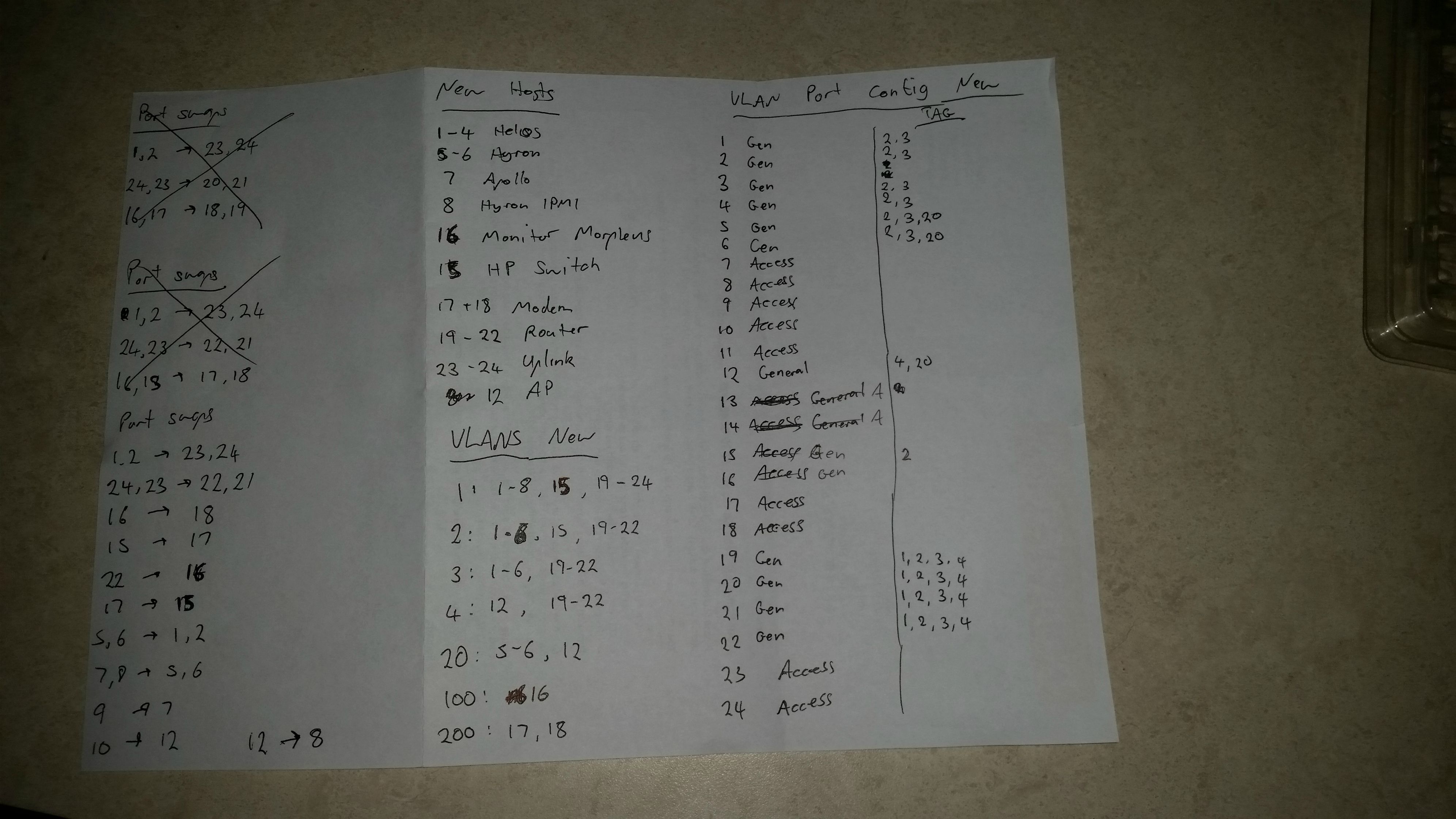 The only sad thing about your network is that you have an ADSL modem. :(

No kidding. They should be putting fiber in here soon though. It will be nice just to have a decent upload speed. Currently I'm on 24 down 1 up.

Although it scares me that you have a Phenom II 945 in your router and you are somehow using 11% CPU load on a DSL connection LOL!!
(Oddly enough I think thats the same motherboard I had when I had my 965)
And 24/1 isn't terrible I guess. 24 down is goood enough for most things... its the 1 up that would drive me crazy. No plex outside your house :(
I am on 150/10

The 24 is alright, the 1 less so :P Plex actually looks surprisingly good on the low bitrate options, but no, I don't use it outside my house because A) it's too damn slow, B) My uploads are counted toward the data cap, C) my phone has a 1GB data cap :(

The computer that I'm using for the router used to be my HTPC, it's totally overkill for the router, I just had it lying around and haven't been motivated to build something less powerful. Not sure why it was at 11% maybe there was something transferring data between the LAN and DMZ networks. Although I do have three (EDIT: actually four, I forgot one) VPN interfaces and four snort interfaces, so it can spike sometimes. But mostly it sits around 1 or 2% at 1800mhz.

Just wondering:
Why do you have 4 interfaces for VPN?

And why do you have foru snort interfaces?

I have two VPNs with torguard, one using an Australian server (because I'm in Australia) which I use for most internet traffic and one in the Netherlands which I use for torrents. I have one which connects to a VPS which I use as my public IP for web facing services (It would make more sense just to run them on the VPS but I like running them locally) and the other is a VPN for accessing the network remotely.

As for snort I run it on each of the external interfaces, so the WAN, the two torguard VPNs and the VPN connecting to the VPS.

These are my firewall rules on the pfsense router, they show the logical structure of the network a little better. 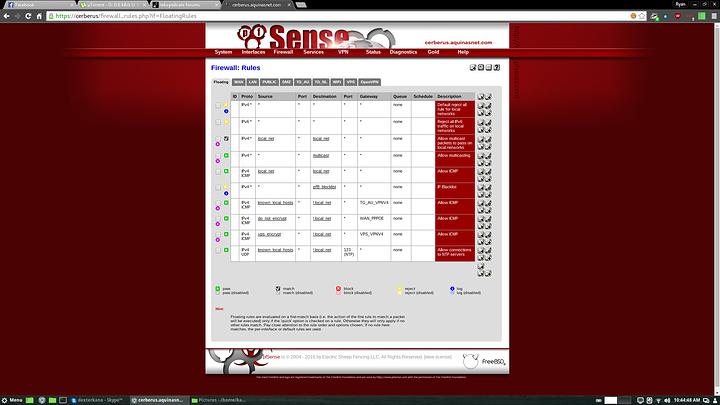 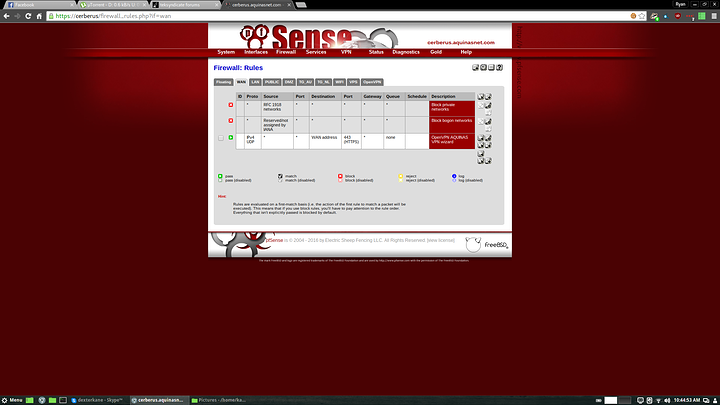 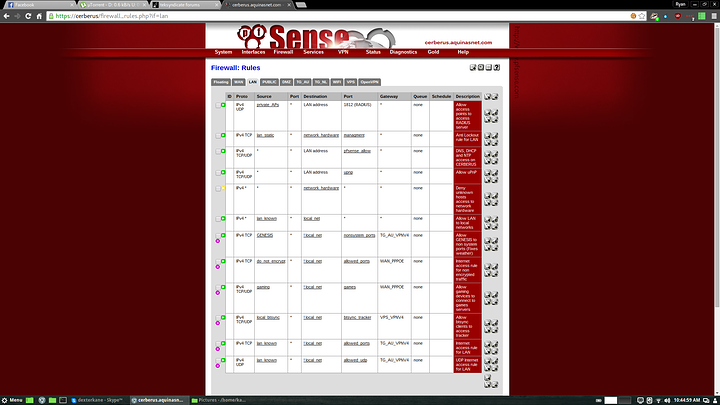 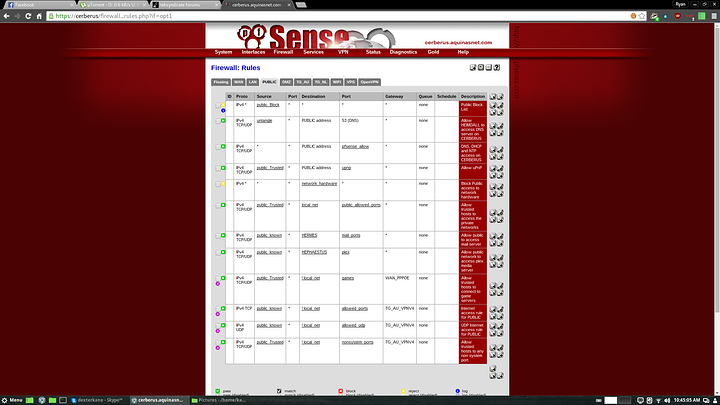 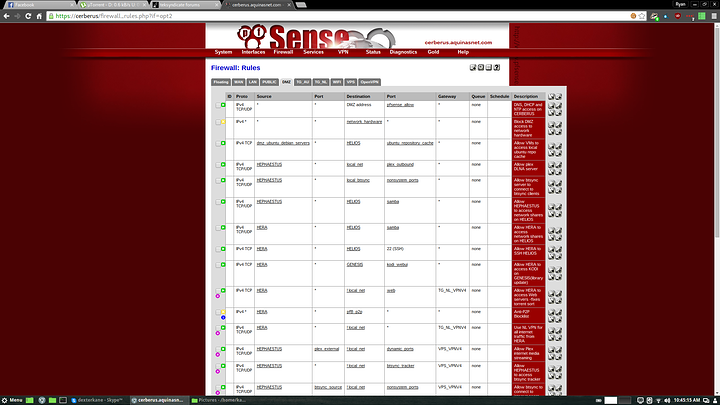 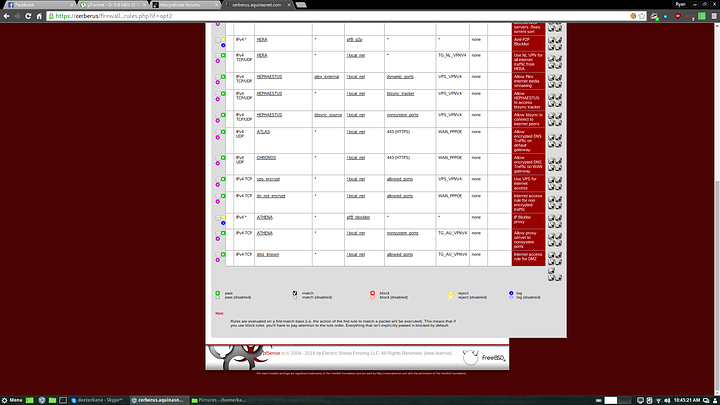 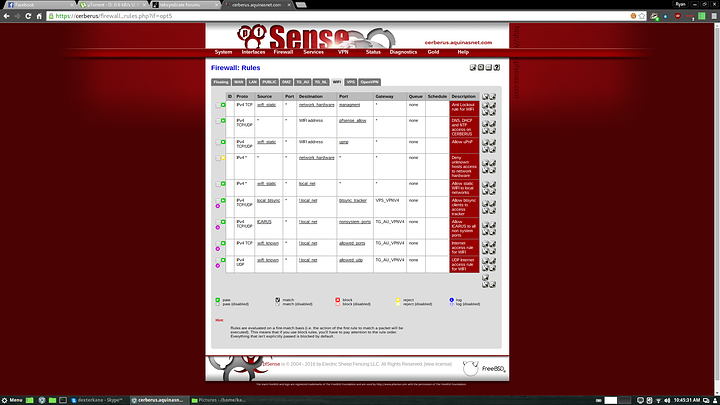 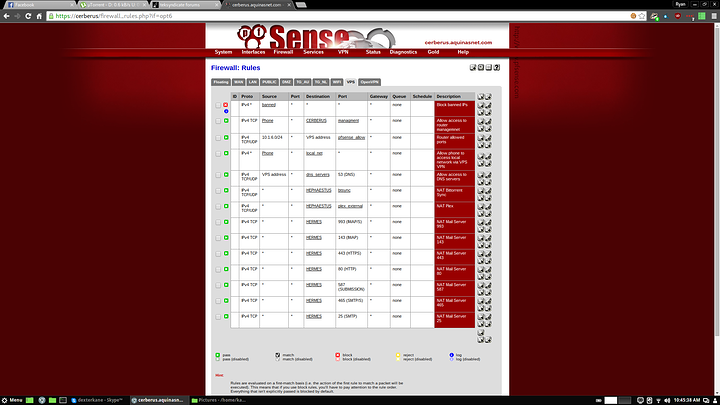 I've got piles of 48 port 3COM layer 3 gigabit switches, boxes of fibre HBAs, fibre enabled MSA1000 SAN with multiple SAS drives. Several server racks plus some 1U HP G5, G6 & G7 proliant servers and hundreds of metres of Ethernet and fibre cables. All waiting to be disposed of at work due to being all legacy kit now.

Do I want any of that in my home .. sorry but nope as it's noisy and power hungry!

Storage is currently centralised in a Core 2 Xenon based system running XPEnology but I'm considering a DAS enclosure for the nano mimi-PC but would prefer a USB-C enabled device.

I'm also looking for an M.2 wireless AP card for the nano mini-PC as the current card can only do AD-Hoc wireless connections to my mobile devices.

Can someone tell me what's the point of having all these servers and networks. It looks impressive but isn't it too much hassle to maintain? Why would I would want have a mail server if I can just sign up to Protonmail or Posteo.de?

Although I would like to have a local server that can stream movies to a 4K TV.

First and foremost: Control. Control of your own data. Yeah, gmail's convenient, and some other services claim to be secure, but in the end the only way you can be sure that your priorities are being addressed appropriately is to run your own servers.

Second is backups, of course, and third I'd say is ease of access to repair, upgrade, maintain.

Basically, why would you pay someone (and if not, how are they getting the money to provide you the service?) to do something you can do yourself?

If you have more than one device in your home, having centralised file storage is awesome. Having a good network is awesome if you want to access that storage quickly and easily.

The mail server was a lot of work to set up, but I enjoy it. I can make a new address in like 5 seconds and I use unique addresses for everything. That way if one address becomes compromised and I start getting tons of spam I can just change it without having to change it for every account. It also makes it really easy to use e-mail notifications for things.

Basically, why would you pay someone (and if not, how are they getting the money to provide you the service?) to do something you can do yourself?

If I pay 12 euros per year to Posteo.de it's still cheaper than buying all that network/server equipment. And I never said I use Gmail.

If you have more than one device in your home, having centralised file storage is awesome. Having a good network is awesome if you want to access that storage quickly and easily.

I'm thinking of getting the Thecus N5xxx something Pro that wendell made a video about. And use it to back up system images of my OS. But it's really expensive. If i fill it with 2TB drives it cost as much as new gaming PC.