[POLL] What Desktop Environment do you use? November 2016

I thought it'd be interesting to make a poll and see what desktop environment Linux users have here on Level1techs.

This is for your PRIMARY desktop environment. I get that some, including myself, like to switch from time to time. But please pick only your favourite DE/the one you use regularly.

This is Linux only, but feel free to post a reply if you are using Windows/Mac instead.

Please let me know if you use something that I missed.

I use KDE Plasma 5 myself.

Also feel free to post about why you use your specific DE, and even a screenshot of it!

Windows peasent that will switch when Zen hits the market.

I'm not sure how people can use Gnome Shell. I've used it for a bit and I just felt like I was always putting out fires. Every time the damn thing boots, there was a different problem.

Anyways, I've been using i3 on my desktop and laptop for the better part of a year now and it's really made me dislike resource intensive DE's.

Voted XMonad, who are the others? :O

Windows peasant #2 that wants to switch but don't know how to use Linux properly.

Based Budgie-Desktop cause it's so gud.. 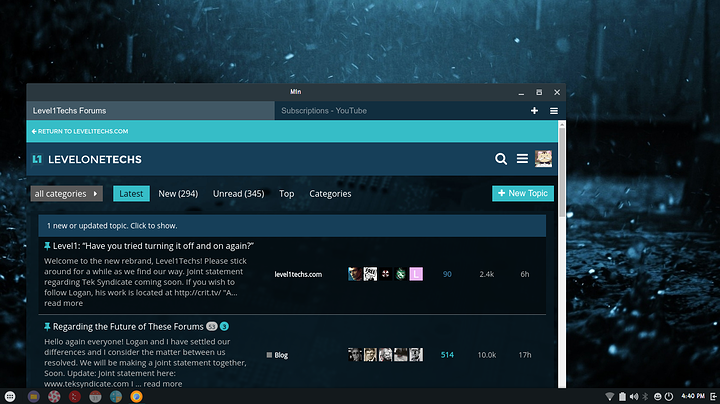 Mainly using kde plasma 5 now, but it requires a dedicated community and the latest version to get the most out of it. I'm using it with kde neon and fc25, both are great bleeding edge kde implementations, fc25 out of the box, kde neon needs manual kernel upgrades etc because ubuntu base... yeah, nothing is perfect lol...

I do use other DE's also, I'm traditionally a Gnome Shell lover because of the workflow focus, it's like what OSX could have been if it would have been made better. Kde is technical and has all the options, and can be overwhelming, but the latest kde plasma 5, when well implemented, is incredibly fast for the wealth of features and advanced nifty accessories and functions, it's an incredibly complex system executed extremely well, and the way it is now, I actually prefer it over Gnome Shell because Gnome Shell has really been slacking with regards to some wayland bugs (e.g. mouse cursor freaks out in steam games when running wayland) and especially with regards to the extreme lack of features in the file manager, that is just a disgrace, and it has been for so long now, that they should be thoroughly ashamed of themselves.

I sometimes use Unity, because Ubuntu, and I like budgie, although it still has a long way to go in terms of features. The thing about budgie though is that Solus OS is so consequent, they don't add a feature unless everything they've already added is well integrated, looks right in the theming and stuff, works fast and optimized, etc... and that's something I can definitely appreciate very much.

Of course I also use WM's instead of DE's, especially in virtual environments that serve a specific purpose. It's great for keeping the overhead low and the system indestructably stable when you're doing stupid experimental stuff with code lol. Graphical DE's tend to not survive the really stupid experiments, so yeah... not stopping with stupid experiments lol...

Use KDE mainly but do Like Unity 8 a lot. And for a light modern DE LXQT is looking sexy.

May switch to them once Unity 8 and LXQT become stable.

I'm surprised i3 is so high on this list.

I've just recently started using I3 and it's like mana from heaven, before that I mainly used unity or gnome depending on the distro. I just can't wait for this semester to be over allowing me to switch back to Arch on my main PC.

I used to use WIndowMaker for the majority of my life (NeXTstep will never die!!!) but I have switched to XFCE on my desktop last month because I needed something that's stable for applications taking over full-screen and the occasional Wine application. Fullscreen applications, most of the time, crashed the entire session and that is very frustrating as you can imagine.

That's where I'm at, I love KDE Plasma 5, but my short stint with i3 was wonderful.

I'm feeling like I should use a tiling desktop now. I've used pretty much all of the others at some point. I used KDE (pre-plasma) up until gnome 3 came out. I really like the changes they made between 2 and 3. Now I use gnome almost exclusively.

I've used xfce for a long time because it's fast and minimalistic. Right now i'm using kde plasma 5, it's fancy and seems more responsive than gnome. Tiling window managers are cool too, but I prefer using tmux in a fullscreen terminal)

I do use i3wm almost as much as Gnome so I'm on the fence...

GNOME for me mainly because of the drop down terminal haha. For a Linux nooby like myself, it feels friendly to use. Although I do like the look of KDE a lot.

I have tried manny diffrent DE´s, and i have to say they are all getting better.
I cannot realy say that i have a favorite DE right now.
But i can say the DE´s that i dont like, which are Gnome3, Unity and Pantheon.

De´s that i do appreciate.

I use KDE and run Yakuake for dropdown terminal, works really well.

May I ask what bugs you're experiencing with Plasma 5? I had quite a few bugs with it until 5.8 hit.