Hey everyone! I have an ASRock X399 Taichi that (allegedly) supports PCIe bifurcation.

I am currently using 3 out of 4 slots, two dual slot GPUs and a single slot 10Gb NIC.

I am possibly looking to add more devices in the future, more than one slot would allow.

Are there any non-PLX PCIe splitters out there to do the job? Especially something that would allow me to use two adjacent slots with maybe half-height cards? Do you know of any such thing?

Edit: Maybe something like this: https://www.aerocooler.com/rc27332x16c15-2u-2-slot-pcie-x16-flexible-riser-card-w-15cm-ribbon/ but in a ribbon cable or tower computer friendly?

Interesting idea. It should work, right? Isn’t that what the low cost NVMe carrier boards do, routing 4 lanes to each m.2 without using a switch chip.

There are much less expensive risers on eBay, might be worth a gamble of you really need more slots.

Also could use simple extension cables to make use of slots that are covered by a large card.

I think it has two or three more slots that are not so fully wired but have the full size x16 connector. My 10g card is connected to one of the promontory slots, and is still wicked fast, faster than any network storage I have available.

Interesting idea. It should work, right? Isn’t that what the low cost NVMe carrier boards do, routing 4 lanes to each m.2 without using a switch chip.

That is exactly what those boards do! They just do it in a single slot package since the nvme size allows it.

The problem is that most ebay risers are 90 degrees risers, meaning that they face down once you plug them in and I don’t have the space for that. They might also be proprietary since many server OEMs use proprietary slots(?) and risers.

I did email a company that produces some x4 splitters to see if they are interested in making something that could be of use for X399 and normal tower computer cases.

It is a shame really that all companies that produce X399 did not add more PCIe slots, since you can bifurcate them manually, something that lower tier boards do by default (e.g. one x16 slot or 2x x8 slots on 115x Intel boards).

I feel a vertical GPU bracket could be modified to hold a larger riser easily enough. Many have room for 3 or even 4 slot GPUs to mount, so, two single slot cards should fit ok. You still need a chassis that supports such a thing. Use the x16 extender that comes with the kit to connect the splitter riser to the motherboard. 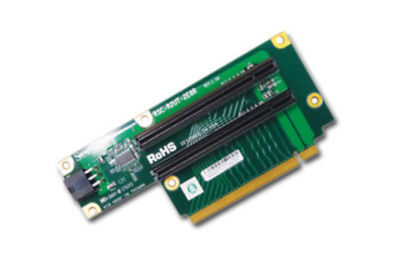 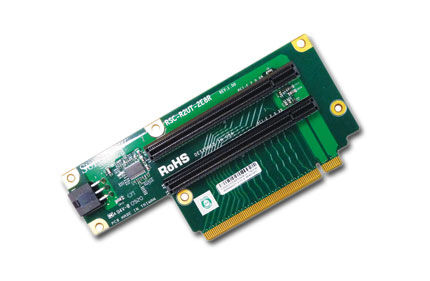 Find many great new & used options and get the best deals for Supermicro 2u Riser Card Passive Gen 2 1xpciex16 to 2xpciex8 Rsc- at the best online prices at eBay! Free shipping for many products!

PCIe 2 and 3 are electrically identical if I recall correctly, so it shouldn’t matter that it’s listed as gen 2 device.

Taking the second x8 slot and splitting it x4 x4 would be plenty of bandwidth for a network controller, and something like an ssd, capture card or thunderbolt 3 adapter.

This is the bracket available for my Lian Li case… room for four single slot cards. 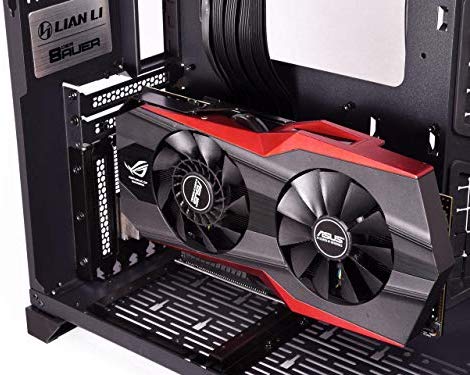 Now you got me thinkin about expansion options, since I’m pondering moving my threadripper into a server role.

@wendell Any idea if something like this could be easily/cheaply produced?

Having so many PCIe lanes and so many x4 devices but only 4 slots is infuriating!

I suppose not many people have this problem but having half-height NICs and HBAs take up whole x8 slots for themselves seems very wasteful to me. 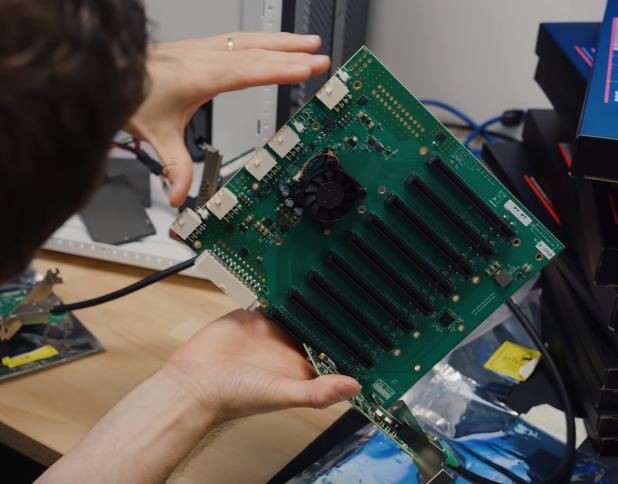 Yeah but something like this is bulky and requires case modding whereas you could adapt one motherboard PCIe slot and 2-4 “case slots” to 2-4 half height slots with the right PCB or some sort of riser cable (which would provide even more flexibility).

I know Wendell and EposVox were also complaining about the lack of more than 4 slots on HEDT platforms so they might hopefully be onto something!

well you could get a bunch of the tri maybe quad bifurcation cards and ribbon cable them in the case?
like using 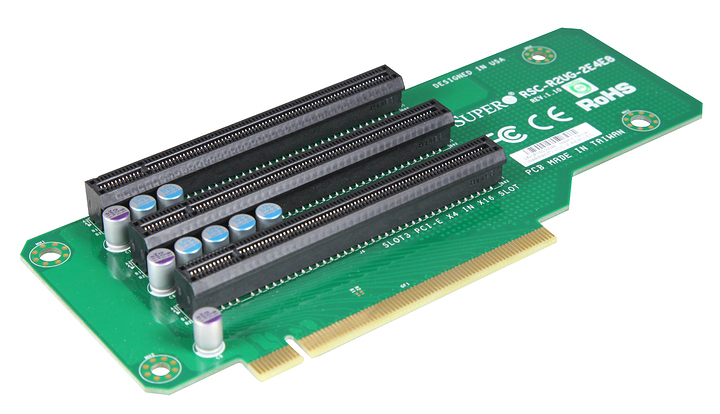 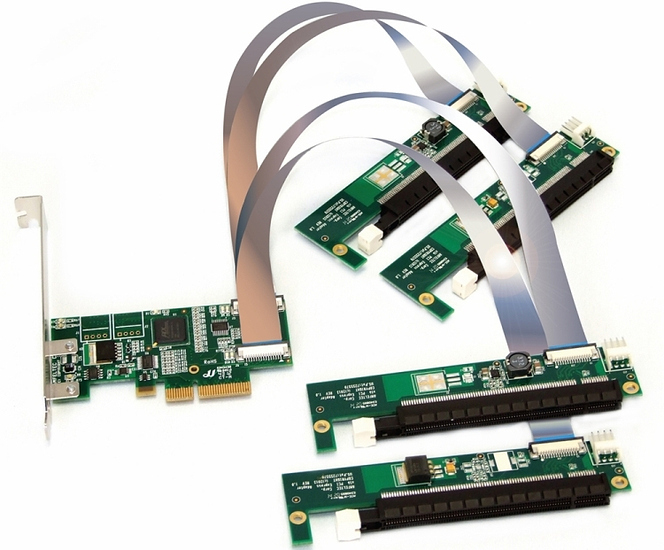 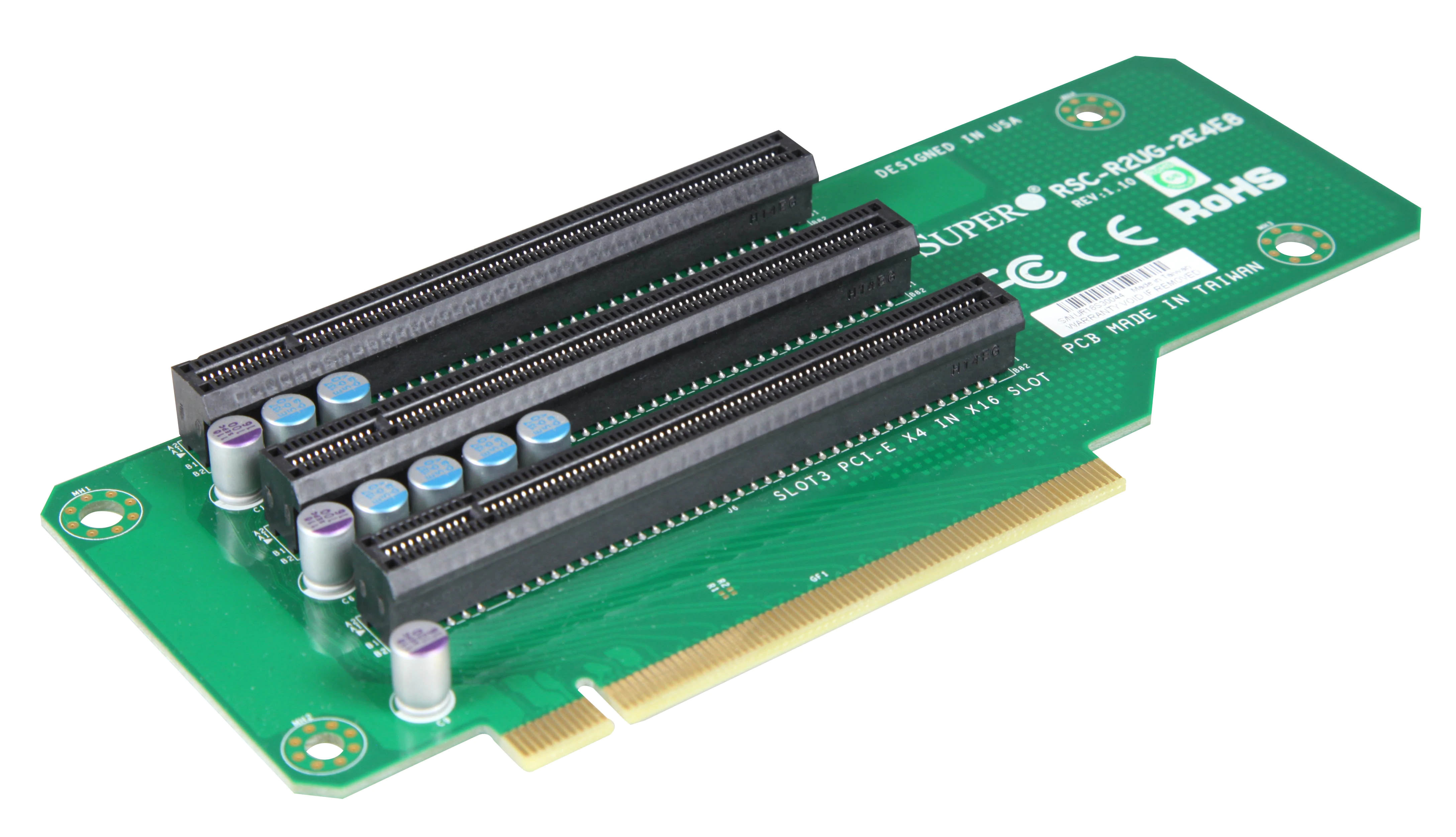 Unfortunately this would occupy the whole slot where it is plugged in.
I have an X399 Taichi board in a Corsair 900D case. The motherboard has 4 PCIe slots to the CPU and 1 to the chipset (pretty useless for anything but USB controllers and soundcards).

Each motherboard slot corresponds to two on the chassis, apart from the bottom one.
If you have two 2-slot GPUs in slots 1 and 3, you are left with a two slot gap at slot 2 and in my case a 4 slot gap at the bottom slot (the 900D can accomodate up to 10 slots).

If you plug something like this in slot 2, you take up a slot and can only use the one underneath. There is no point in doing that.

If you plug it in slot 4, you can only double it so effectively you get 5 in total.

If you could produce this at a 90 degree angle and use half height cards, then you could use it at both slots 2 and 4 and end up with a total of 6. If you produced a flexible solution that can plug in slots 1 or 3, then you could multiply them 4 times. If they are flexible enough, you could use them with the bottom 4 unused chassis slots and could get up to the full 10 slots theoretically. It would also be usable in any computer case without mods.

90% or more of X399 motherboards use this layout, probably many of the X299 use something similar as well. Most 10Gb NICs and HBAs come with half height adaptors for server use.

MIning solutions are no good unfortunately. Devices like 10Gb network cards and HBAs need their PCIe 3.0 x4 bandwidth and the mining solutions only usually provide PCIe 2.0 or 1.1 x1.

If you plug something like this in slot 2, you take up a slot and can only use the one underneath. There is no point in doing that.

Oh I see, you meant to use the ribbon to connect the adapter to the motherboard!

I just immediately though of connecting the adapter straight on the motherboard and then use 90 degree ribbon cables. My bad!

I see what you mean but you would need a really short ribbon cable as they are usually very bulky and hard to twist.

But a PCB that has both the female and male parts in-line and the proper spacing for a half height card to plug in and then be screwed to the case would be ideal. 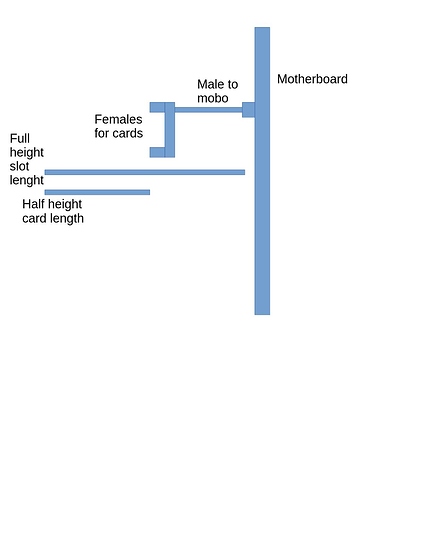 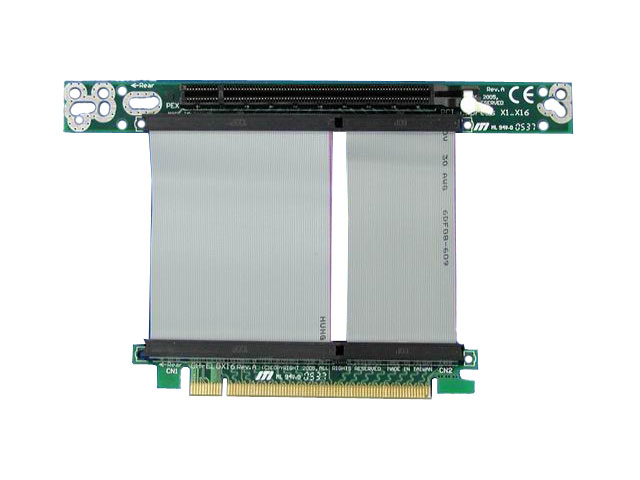 im dumb they make bifurcation cards like what i described 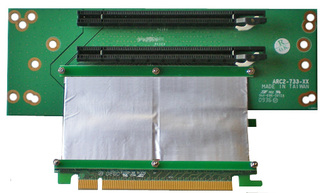 All the msi boards starting with b450 have bifurcation setting in the bios, but I don’t know if it’s only for 4x4x4x4x split or if you can do other splits

Does the supermicro bifurcation riser work on all motherboards though? Or is it like the Dell and HP proprietary ones?

They also only seem to produce the 1 to 3 one and I don’t know how that splits the lanes. I also have not seen them available anywhere but did not really look that much.

What about power? Would a kind of janky solution like that be able to provide 25W or more to each card?

Edit: Where did you find this?

Edit 2: The overhang on the left seems too long to fit in a case.

this one has a shorter cable and smaller pcb