I'm building a PC for a friend and threw together a quick build. Since I've never done a build for streaming and recording I'd like to get some feedback.

GPU:
The 1070 is just a placeholder since there aren't really any available atm.

CPU:
I'm not ordering before June 26th because Intel is releasing their new CPUs (I think). I'm guessing Ryzen will still be the better choice but there's no reason to gamble. As far as I know the 1700 in overclockable and can reach (and surpass) 1700X performance so that should be a good choice.

Edit: I probably shouldn't be overclocking very much, if at all on a B350 board according to the feedback I've gotten. But the CPU should still be fine.

HDD:
Now i'm not so sure if the 3xWD Red software RAID 5 is a good idea but I thought it would be a good compromise between security and space. I assume the performance should be fine for recording.

Mainboard:
I always go with the cheapest Mainboard that has all of the required features. Can anyone tell me how to quickly find out if a M.2 slot on a mainboard is connected via PCIe? I'm also not quite sure how the ryzen CPU lanes work but there should be 4xPCIe 3.0 form the CPU for the M.2.

Regardless of what intel will be releasing on X299.
The Ryzen 1700 / 1700X are still going to be very decent and hard to beat at their value for money price point.
Unless the the 7800X 6 core 12 threads is going to blow a 1700 (X) 8 core out of the water.
But that will be depending on what kind of games you play and how you play them.
But still, then there is also cost facturing on the motherboards.
X299 boards will probablly gonne cost a bit more then am4 X370 boards.

Now to Ryzen 1700 / 1700X overclocking and motherboard choice.
Since you are looking into overclocking, i guess you are probablly gonna aim for the best possible performance out of it.
In that case i would highly recommend not to cheap out on the motherboard.
Because you really want a decent board.
The motherboard that i would personally recommend is the Asrock X370 Taichi.
This particular board has pretty much all the bells and whisles you need for a reasonable price.
But more importantlly, the Asrock X370 Taichi and the Asrock X370 Professional gaming, have the best and most efficient vrm implementations, of all Am4 motherboards currentlly in existance.
If you dont like the designs of the Asrock boards, then the Asus Maximus 6 Hero would be my alternative recommendation.

Another important part on Ryzen are the memory modules.
I could highly recommend to go with a pair of G.skill TridentZ modules.
Because those seem play pretty well with Ryzen.
Also the G.skill Flare X modules seem to work fine.

Well the goal is to to achieve good value. Since overclocking yields ~10% extra performance from what I've seen I can't really justify spending 230€ instead of 86€ on the mainboard, not to mention the more expensive RAM. At that point I could almost just buy a 1800X instead. Also I'm slightly above budget already and don't really know what I'd even cut from the build.

Well of course you could also go with a 1700 (X) and a cheap B350 board,
And then eventually hope for the best wenn it comes to overclocking.
But all i can say is that pretty much every B350 board is pretty poor,
as far as the vrm implementations are concerned.
The Msi B350 Gaming pro carbon or the Msi B350 Krait Gaming,
are kinda the best B350 boards in terms of max current capabilities on the vcore vrm.
and are basiclly okayish for R7 cpu´s on stock, and some overclocking maybe.
But most B350 boards are more ment to pair with R5 cpu´s really.

But of course its all up to you.

I can only give my advices based on the vrm researches i have done on those boards.
My advice is dont cheap out on a motherboard too much, if you temp to use a highend R7 cpu overclocked.
I can totally understand that the Asrock X370 Taichi might be a bit too expensive for you.
But there are also good cheaper alternatives like the ASrock X370 Gaming K4, Asrock X370 Killer Sli or Asus X370 prime pro.

I never recommend cheaping out on the mainboard or PSU, EVER. It is the lifeblood of your machine.

Currently the better X370/B350 boards would be from ASRock, there are other brands too but they are not as easy a choice. The low end(cheap) Gigabyte boards are apparently not that good.

Also 400W PSU, you are shooting yourself in the foot with that, under load with a 1070 + all other peripherals the margins will be rather narrow

Well unfortunatlly the B350 boards from Gigabyte are worse then the Msi B350 Gaming pro carbon,
and the B350 Krait in particular.

Yikes. So essentially it's currently a minefield of mixed boards?
I haven't looked much after I got my ASRock X370 boards.

yeah most B350 boards are poor.

Gigabyte on their B350 boards is using a 4+3 phase design on pretty much all of them.
On which for the mosfets they use a single highside ON semiconductor 4C10N for highside and 2x 4C06N for lowside.
The 4C10N fets in particular are not that great in terms of thermal capabilities under full load.

And 400W should be absolutely plenty according to these measurements (both power draw from the wall) : 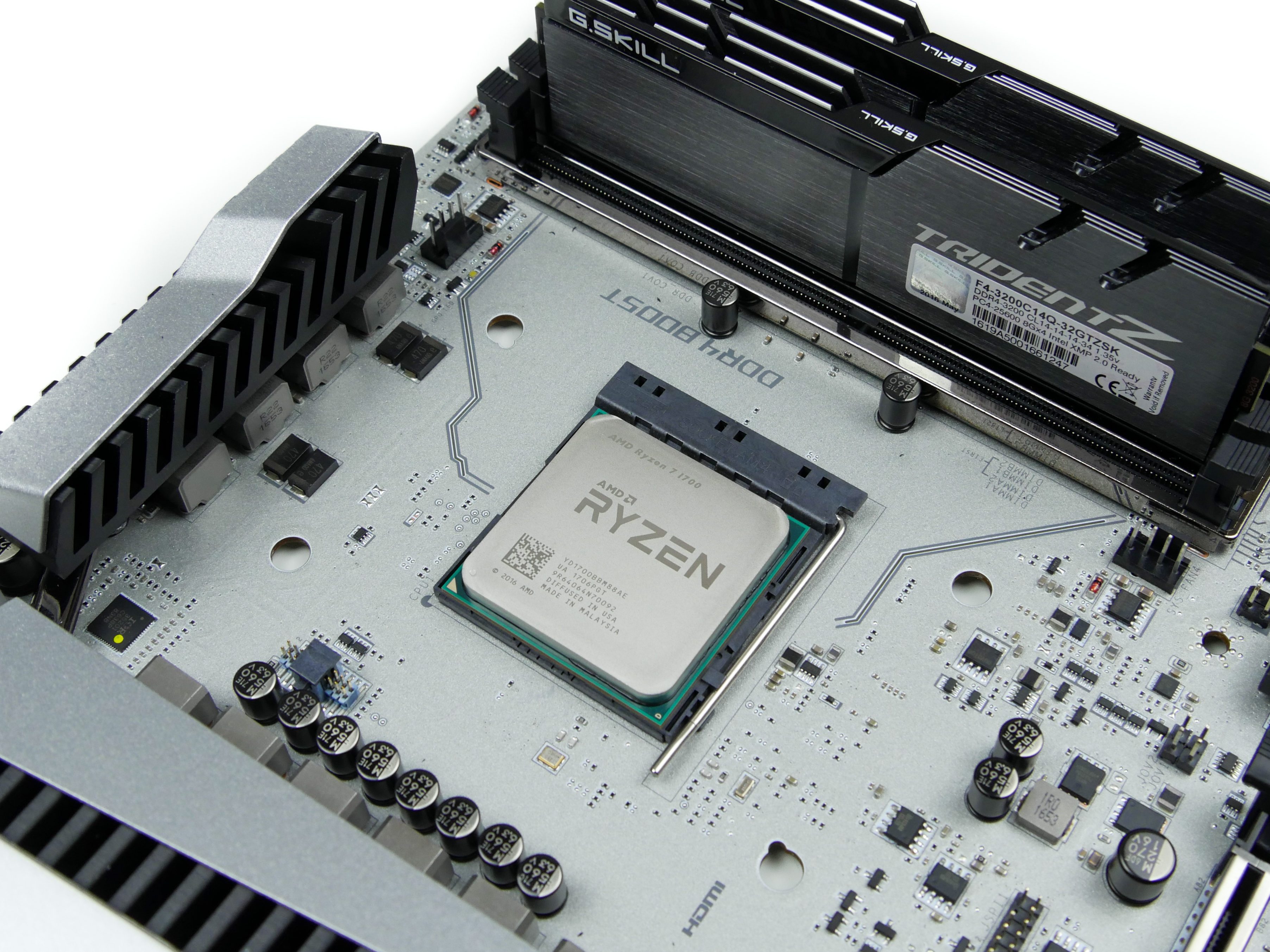 I'm not sure about the board but I've never had a single issue with a budget board and I'd probably rather skip on the oc than pay triple for the board. But can anyone tell what exactly the disadvantages of a B350 board would be? "They are bad/poor" isn't exactly convincing. Again, not getting the full ~10% OC performance wouldn't be a huge deal. I sadly have to stay in the budget.

But they do seem to dissipate a good bit more power than their counterparts used by ASRock. 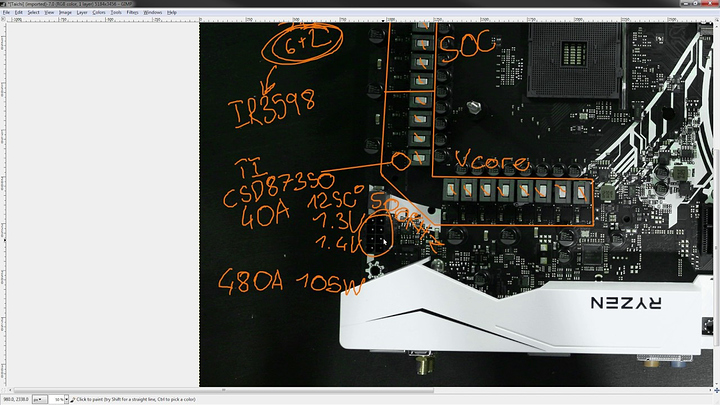 I'd probably say if X370 = ASRock X370 Gaming K4 but they can be hard to find due to demand.
If B350 get one of the boards MysteryAngel suggested.

Here's an overview video to give you an idea:

As for power, the test you linked is an AIDA64 run, this is purely a CPU heat stress test, it doesn't stress ram, PCI-e bus, much of the chipset, storage devices or GPU and is thus not representative of overall system power draw.

400W is what you would put in a low end machine. The reason so many people over spec on the PSU is to run the PSU quiet, cool and most of all have the system well inside the margins at a low load where the PSU is often more efficient than at a higher load. It has a number of benefits that you can look up.

Those are estimates, but what about those measurements I posted earlier? Those are around 200W.

And I can probly squeeze in the MSI Krait Gaming board, thanks for the suggestion. I'll have to cut somewhere though. RAM probably won't get any cheaper. Maybe the SSD.

It's worth noting that a 65Watt TDP does NOT mean power draw.

The thermal design power (TDP), sometimes called thermal design point, is the maximum amount of heat generated by a computer chip or component (often the CPU or GPU) that the cooling system in a computer is designed to dissipate in typical operation. Rather than specifying CPU's real power dissipation, TDP serves as the nominal value for designing CPU cooling systems. The TDP is typically not the largest amount of heat the CPU could ever generate (peak power), such as by running a power virus, bu...

It refers to design/dissipative power

It is the maximum amount of heat generated by a computer chip that the cooling system in a computer is designed to dissipate in typical operation.

Note that actual power draw as a function of Voltage * Current is far in excess of TDP.

Unless you really need to 2 extra cores you can easily go to a R5 1600/1600x.
They too will handle gaming + Streaming/recording just fine.

The 4C10N does about 30A with 9W of heat dissipation at 125°C.
Which is basiclly really budget like.

The Ti NExfet CSD87350 are 40A continouslly at 125°C.
Those have a way better efficiency and current trough put.

The Asrock X370 Gaming K4 and X370 Killer Sli is using Sinopower mosfets for highside and lowside, SM4336 and SM4337 respectively.
I think those are arround 35A ish current troughput.
But i eventually have to look up the exact ratings on those.

BUt never the less if i had to recommend a B350 board.
Then it would be the Msi B350 Gaming pro carbon or the Krait Gaming.
The reason being, allthough they use some cheap budget Nikos mosfets.
But on those particular 2 boards, they doubled up the components on each phase.
Which means that its basiclly still a 4+2 fase, with doubled up components
But its not an 8+2 phase as Msi might want you to believe..

im aware this is the watt calc copy/paste from pcpartpicker.

and @GummiGunther
what measurements? and if anything 331w in conservative.

Most of the time they're hovering around the 50C mark.

This is a firestrike benchmark, which should be fairly representative:
http://www.relaxedtech.com/reviews/amd/ryzen-7-1700x/2