The Intel i9 series CPUs represent a change in strategy from Intel for performance scaling in an era of CPUs that increase performance by adding cores. Like the transition from dual core to quad core CPUs that came before it, there will be some performance regressions in some scenarios.

This is really surprising and very eye-opening to the architectural changes that most other tech channels will likely overlook.

Love the Transmeta reference. That company will always have a special place in my heart.

I gotta get some transmeta cpus for my collection. I have bupkiss from transmeta. the most obscure cpu I have is probably the ratheon repackaged 8080 for some missile guidance system somewhere

But yeah intels main improvements are within the platforms and added instruction sets.
But wenn it comes to raw cpu performance, not really that much mindblowing.

nice bench, hope people will chill out with looking to replace their cpu’s/systems each new cpu release…

People keep asking what to buy for used hardware. These iterative changes make it easy to recommend and old cpu coupled with some recycled parts. Didn’t know compatibility with the Xeon’ s and X79 was that good.

Considering you can get the Xeons for $150-300 on Ebay, that would be a decent competitor if it holds up anything like the 2680 does.

I have Sandy-Bridge i7 with R9 290 and don’t plan on upgrading any time soon. Because there just isn’t any reason to do it. The comp can deal with anything I throw at it. 15 years ago getting a new GPU meant the difference between being able to play the game and not able to start the game at all. Those times are gone.

The only people that need frequent upgrades are the scientist that use super computers for weather forecast, molecular simulations and such.

I had a q6600 for years overclocked and just kept the GPU up to date. The MB died and I was cash strapped so got a i3 / MB / Ram and moved the GPU over and lasted years longer gaming.
I got a ryzen 1700 to mess more with VM’s I was surprised (when I should not have been) that games just dont use threads and are mostly 2 cores worth of workload.

This is Basically what i am trying to upgrade my Dual X5660 bench to. 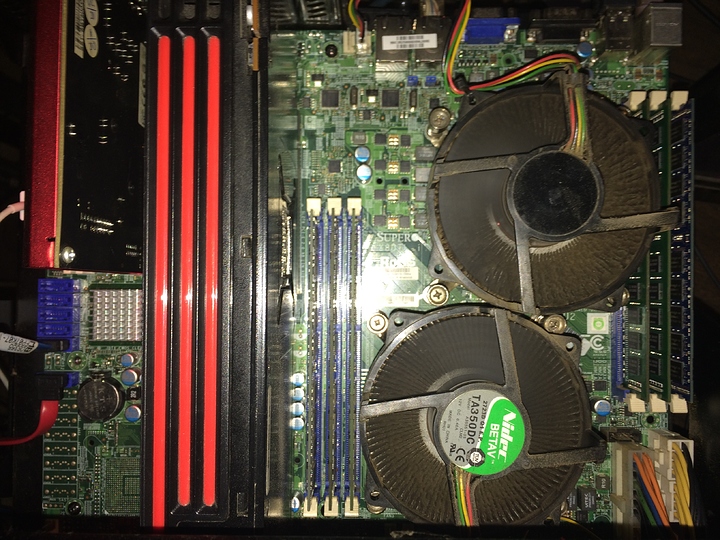 I had a q6600 for years overclocked

That was a sweet little beast. I won the silicon lottery with that one. It was a G0 stepping version. I managed to get it to 4.0Ghz.

That’s a decent name for a group actually. GPC.

Nice reading and comforting as well to see my current old scavenged dual E5 2670 with SSD’s and a 1080ti being capable still and it does handle everything rather well.
USB3 support is however rather bad and NVME is not even worth a try.
Want to get a Ryzen 1700 system but this old beast is still too good to abandon…

Hi I have tried a number of add in cards for USB 3.0, I ended up with this in my X58 system https://www.amazon.co.uk/dodocool-Express-Type-C-Type-Desktop/dp/B01C59TB0I
Its USB 3.1 Gen 2, two ports on a PCIE x4 card.
I haven’t tested in Linux, and you do need to install the driver for it too work. Seems to offer very good speeds. However I only have a top end Gen1 flash drive to test with.

I wouldn’t have thought such an old Xeon was so competitive.

How about the next generation 2011-3 comparison:)