Coming next week, this is changing. On January 15th, NVIDIA will be releasing a new driver that enables VESA Adaptive Sync support on GeForce GTX 10 and GeForce RTX 20 series (i.e. Pascal and newer) cards. There will be a bit of gatekeeping involved on NVIDIA’s part – it won’t be enabled automatically for most monitors – but the option will be there to enable variable refresh (or at least try to enable it) for all VESA Adaptive Sync monitors. If a monitor supports the technology – be it labeled VESA Adaptive Sync or AMD FreeSync – then NVIDIA’s cards can finally take advantage of their variable refresh features. Full stop.

Bit of an ouch if you spent extra cash on a gsync display.

Personally I feel that a company should reward their customers for buying their products - customer satisfaction should be one of your highest priorities as this builds brand loyalty. This move (a good move for the public) is a direct FU to customers who paid a $140 premium to get some sort of adaptive sync.

Thing is I’m a long time AMD user as they have been treating their customers much better (Well they don’t really have a choice as they have been the underdog for a while), this makes me biased. I’m wondering how users who paid the premium feel?

Are Nvidia customers not willing to shell out 140 additional bucks on their monitor purchases?

finally, after people started to hack the nvidia driver, nvidia “allows” it…

G-Sync compatible… What a bunch of arseholes.

If anything they are freesync compatible now as they were the ones locking people out.

Bit of an ouch if you spent extra cash on a gsync display.

You know nVidia will claim theirs is still better to encourage you to keep buying up their warehouse stock and make the early shafted feel better.

You know nVidia will claim theirs is still better to encourage you to keep buying up their warehouse stock and make the early shafted feel better.

I see, that makes way more sense now - else gsync owners spent so much more for the same thing. Luckily they didn’t!

Whatever your budget or needs, there’s a G-SYNC display for you with the launch of new G-SYNC monitors and laptops at CES and the unveiling of “G-SYNC Compatible”.

Que: Ding-Dong! The Witch Is Dead, for G-Sync.

Oh that is all sorts of sneaky and underhanded. Adaptive sync is a standard that should just work as long as both sending and receiving agree. They are all ready distancing themselves from it with may not work clauses.

I would not be one bit surprised to see them break it and then blame it on the freesync tech and not their willful destruction of their own software to further their hardware sales.

Managing something to fail is a viable business tactic.

“See we tried it but it doesn’t work!”

Trick is catching people out when they do it.

I guess there will still be a nice sum involved for OEMs for certification and marketing use but this is super good for enthusiast consumers.

I’d expect they’ll be charging the monitor manufacturers almost as much as they did for the GSync hardware and validation. It’s still an excuse to mark up the monitors.

There are three key advantages Radeon™ FreeSync technology holds over G-Sync: no licensing fees to monitor OEMs for adoption, no expensive or proprietary hardware modules, and no communication overhead.

I’d assume that AMD still charge the monitor manufacturers to put their branding on their packaging and marketing material.

Didn´t AMD give out the CrossFire branding out for free too?

this is super good for enthusiast consumers.

I bought the cheapest 32" 1440p 144hz monitor money can buy and it has freesync. Granted its still pretty great since my 1070 rarely has problems keeping vsync. Its nice I can maybe use it on those games where I dont get the full 144. People talk about both gsync and freesync being great but I have no idea what it feels like. Now I too can be part of the mustard rice.

I means I am no longer artifically tied to either vendor going forwards. 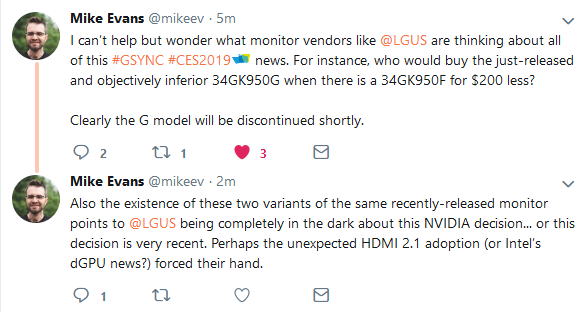 I think the monitor companies were on the verge of booting Gsync from their lineup since I guess it’s a pain in the ass get custom components from someone else, requires more engineering and leads to surely less profit since Nvidia has to make money off of their components too.
I don’t think consumers and driver hacking really did anything to change Nvidia’s mind. They just enabled adaptive sync on their GPUs in hope to keep selling some Gsync screens and sell more GPUs (for example if a buyer has a freesync mid range monitor and wants to upgrade to a 1060 would probably buy a 580 to use freesync).
Anyway this is a really good thing for the consumers, however it came to be.

And I agree with his analysis.

Yeah. They would have coordinated with major producers like LG, which creates like half of the LCD panels in the world. That does indicate this is a very recent decision.

We’ve always known Nvidia could support adaptive sync with a simple driver flag, so it was never a technical blocker, it was a business one.

Another Nvidia technology, that failed. Alongside physx…