Netflix on fedora, HOW [solved]

So I recently got a netflix account (cousin is generous), and I run fedora. So from what I have read is that ubuntu has a package which allows chrome to watch netflix, but that doesn't help my case, with more research I come across pipelight, a wrapper for windows only browser addons for firefox, which has silverlight in it's list of stable extensions it can emulate. So I go and install silverlight and it gives me this screen when I attempt to playback video, here's the odd thing, when I go to this offical MS website which is used to benchmark silverlight performance it works fine. So I'm asking you (And also @wendell ) because I hear it can be done and I want to start watching this stranger things I keep on hearing so much about.

Last I checked, if you're using Google Chrome (not chromium, if I remember correctly) the HTML5-DRM feature of it is supported by Netflix, so you can watch natively that way. What browser are you using?

About the Silverlight issue, you need to spoof your browser agent. I forget what the exact string is, but there are premade strings to be found around the web.

I don't mind installing chrome, and even with the string and it showing up in addons the video just won't play.

Okay. I just installed Chrome on Solus to test and it worked out of the box. 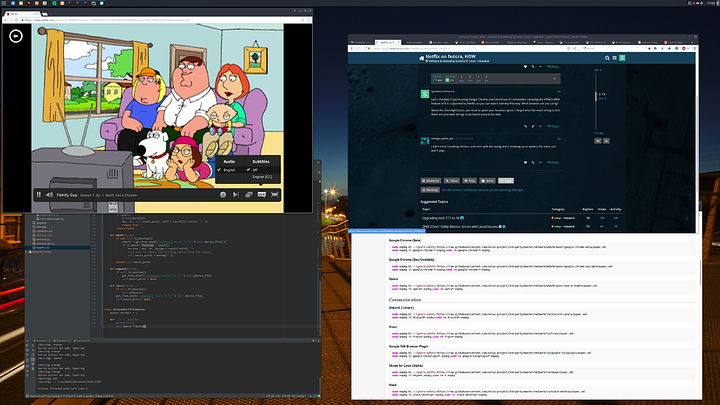 So, I'd recommend giving Chrome a try and see what happens.

Not to sound like a broken record, but I am running Fedora 25 Workstation, and there is no problem watching Netflix, I do it about once a weekday on the machine. Try not using any other add-ons that mess with Silverlight or Netflix.

Just installed chrome, it works, also I need to upgrade to fedora 25.

Which version of Fedora are you currently on? I am glad to hear that Chrome is working for you!

would be better off just reinstalling to fedora 25. the system-upgrade thing can brick your system.

broke updates when i tried it

Which browser are you using?

Typically Google Chrome, but I have also gotten it to work with Firefox, Vivaldi, and Opera.

I was under the impression that Firefox didn't currently support the DRM features that Netflix requires.

I normally use Firefox, but I don't watch netflix. I'm more of a plex person. Netflix isn't working on firefox for me, upon checking. Using V50.0.2.

Hmm, I do remember that I had to use a script from an add-on for a useragent, but there was some Wine involved as well, it was about 2 years ago, so I doubt the workaround even exists.

Ah. No big deal. I'm not all that interested in it anyways. The fact that netflix is supporting Linux through Chrome is a good step though.

But how do I get everything to have a clean transfer? Just put my home folder on a separate drive and also have it so that I just have a list of all the packages I have and config files? Or is there some other way to do this, doesn't opensuse YaST have this in a far better way in a single text file for the ladder of the previous.

If you wish to use Netflix, Hulu or any streaming service for that matter. you are stuck with Chrome.. a lot of them use DRM features that aren't built into other browsers on Linux. for example flash, which yes it's dead.. but fucking Hulu won't get with the times. Chrome has all this stuff built in to play said DRM on Linux.

Yep. They did it because if they didn't no one would buy a chromebook. I mean, think about it: People who buy chromebooks pretty much just want to edit google docs and watch netflix.

So could I have an extension which identifies when I open up a netflix tab and then have that open chrome with a netflix tab and delete the instance in firefox? Or could that be accomplished with an monkey script?

ehh I know people who bought a chromebook just for Linux. but ChromeOS isn't terrible, what makes it bad is that it's dependent on the internet connectivity for functionality.

That sounds about right, but could the dates align with the increase in chromebooks and linux DRM support? How hard would it be to implement DRM on linux? The making of a tech conspiracy. Will look into.