Need help.. wondering if i made the right choices

for $1000 us I think you should be looking for an 8 core ryzen personally as you are aiming at keeping it a while. Also because you are gaming you need to spend a fair chunk of your budget on a graphics card and have a balanced system.
my idea would be to buy
r7 3700x
rtx 2070s
b450 board
256gb nvme for os
500gb/1tb ssd for storage
600w broze or better psu
case with lots of ventilation and lots of fans

Build in the op looks fine to me.
Also don’t cheap out on a motherboard too much,
cause you will likely regret that later.

Asrock X570 Taichi is decent board for a 3700X.
And it wil also be fine if you ever want to upgrade to a 3900X / 3950X.
Of course there are cheaper x570 boards that will also be totally fine for that.
But yeah then you will have to give up on some connetivity features generally.

Pretty much all B450 boards are “kinda” rubbish when it comes,
to their build quality and vrm.
Of course they are fine for Ryzen 5 cpu´s.
And a few are okayish for Ryzen 7 as well.
With a very few exceptions of being reasonable B450 boards.
But those arent that cheap generally either.
Also if you want to save yourself some potential headaches,
just go with a x570 board really for the 3000 series cpu´s.

But if you have like 1K to spend on cpu + mobo + ram upgrade.
Then i would personally advice not to cheap out on a board too much.
Especially not if your goal is to run this system for a long time.

A few X570 boards that i could recommend being decent in price categories.

I will not mention the higherend market,
because in my opinion lioke $400,- is trully the max,
anybody should spend on a main stream motherboard.

Semi highend, depending on prices in your area.

You can’t really go wrong with picking any of those.

So yeah looking my board list.
If you temp to also buy a new gpu.

You could eventually go with like a 3700X + Gigabyte X570 Aorus Elite.
This board will still cover most of the base features you would need,
without it being terrible.

And then you will have some cash left for a gpu upgrade as well.
Maybe a RTX2070 super or something similar.
Cause AMD doesn’t really have much to offer in their GPU department,
to really hit hard on your current 1070 SC.

ohhh ok i understand… so id be better off with the R5 3600X and just pair that with a MSI B450 Tomohawk max MOBO and it should be fine? with 3200 mhz memeory?

Reading through this thread is weird for me. If I was to give you an advice it would be replace the 3600 ram with 3200 ram, keep the 8 core since it will last you longer, get a smaller NVMe for boot OS drive and get SATA SSD for your games.
I don’t see why you should step down from 3700X and literally lose 2 cores.

Maybe a RTX2070 or something similar.
Cause AMD doesn’t really have much to offer in their GPU department,

I don’t see why you should step down from 3700X and literally lose 2 cores.

Agree, Although since the system is mainly used for gaming.
I could understand some people recommending a 3600X instead for now.

Of course a 3600X is a bit in a difficult spot if you ask me.
Because those cpu’s are a little bit too cheap kinda to put in a X570 board, except for the Aorus Elite.

But of course a 3600X with a Msi B450 Gaming pro Carbon AC,
would be a decent combination.
That particular board is also decent for a 3700X.
If money is trully an issue.
But this is also the only B450 board that i can personally really appreciate for the 8 cores.
For the 6 core chips most B450 boards will do fine.
But yeah not all have usb flashback so that is something topic starter should keep in mind doe.

Sure that is of course fair enough.
However that highly depends on how high the 2070 super prices are right now. 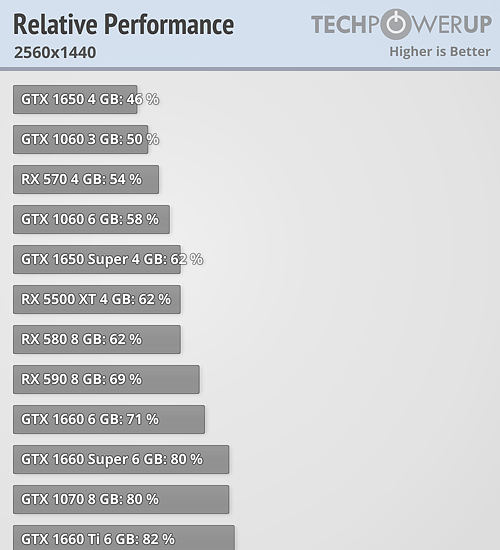 relative-performance_2560-1440.png500×1210 60.6 KB
You give waaaaay to much credit to Nvidia… You know how they love to cripple their older gen stuff.
Anyways, my point is there is quite a lot that could replace 1070 and give super decent performance bump.

My advice however will be to hold on a bit. If the plan is to use this machine for a decade the author may want to hold on for the new AMD and Nvidia GPUs that are rumoured to show up at some point during the summer…

Nvidias product segmentation in a nutshell.

You give waaaaay to much credit to Nvidia… You know how they love to cripple their older gen stuff.
Anyways, my point is there is quite a lot that could replace 1070 and give super decent performance bump.

Yup i likely did haha.

I though that a 1070 sc was still putting up a decent showing,
in recent benchmarks.
But i likely had the 1070Ti numbers in mind haha.

Thank you so much for the detailed explanation on the MOBOs. i’m thinking of going with the Gigabyte X570 Aorus Master only because i read that the bios interface is pretty easy to navigate, over the taichi… but i’m still looking and researching… i believe that my final buy is going to be the 3700X paired with one of these mobo’s, and 3600mhz ram… i don’t
think i could go wrong with that. As it leaves me room to upgrade in the future.

Come to think of it I could even do an x470 mobo, like this one? https://www.microcenter.com/product/600975/gigabyte-x470-aorus-ultra-gaming-am4-atx-amd-motherboard

Yeah, I’m not a fan of X570 overall, there certainly isn’t a real need for it for almost anyone. PCIe3 is still fine for years and years to come and X570 is expensive and has stupid little fans on it.

Yeah, I’m seeing that the x570 are really not needed… Having a fan on the mobo like that can just great a nother failure point and that will be a Pretty bad one if it goes out. I’m actually Looking at the x470 mobos. But I want a good motherboard, That can handle a 3700 X. CPU and have room to O.C

Unless you’re ACTUALLY running 1080p res on a 2080 ti (which is a kinda pointless metric because doing that is generally not what people do - if you have that card you’re typically running 1440p or more likely 4k or using RTX, etc.), stop worrying about CPU bottlenecking.

Also, as games start taking advantage of more cores (and they already are) expect the “cpu bottleneck” problem of ryzen to diminish due to having more cores than the equivalent price (or, any mainsteam) intel.

Well honestly the Gigabyte X470 Aorus Ultra and the Gaming5 are not really great boards.
At least those boards aren’t really what i would recommend,
because the vrm build quality on those two particular models is pretty poor,
at least when it comes to the mosfets they used in the vrm.

If you don’t particularly need pci-e 4.0 then you could indeed consider to go with a X470 board.
There are a few very interesting and decent X470 board options out there.

So yeah depending on your use case scenario, going with either one of those boards,
would be a decent choice.
When you are an overclocker then the Asus Crosshair VII Hero will likely suite you better,
then the Asrock boards.
At least when it comes to memory overclocking in particular.
But of course there isn’t really that much to gain on Ryzen anyways in terms of overclocking.
So that is something to generally keep in mind.
I believe out of the top of my head the Asrock x470 Taichi is still using T-topology for its memory plain.
So that is one of the reasons why it will be a bit more finicky when it comes to memory overclocking with 2 dimms.
The Asus board is using daisy chain, and will generally be better at overclocking with 2 dimms.
Of course there is definitely some performance to gain on Ryzen when it comes to memory overclocking.
But yeah it kinda depends on the said use case scenario if it would really be worth all the hassle or not.

But overall i wouldn’t bother too much about overclocking in general.
I would choose features above it.
To me the Asrock X470 Taichi ultimate is still the nicest board from a feature perspective.
The bios is of course less refined on Asrock like i also mentioned above.
But still it shouldn’t really be that much of a hassle to navigate.

thank you for your detailed replys. I highly appreciate that… As far as case go’s I have a https://www.newegg.com/black-phanteks-enthoo-pro-atx-full-tower/p/N82E16811854003?item=N82E16811854003&source=googleshopping&nm_mc=knc-googleadwords-mobile&cm_mmc=knc-googleadwords-mobile--pla--cases+%28computer+cases±+atx+form%29-_-N82E16811854003&gclsrc=aw.ds&&gclid=CjwKCAiA4Y7yBRB8EiwADV1haYb0nM3JOvKVox6uj2EKd-7wM_inKWqdD8PutJta4wG4SC3ONvH3TBoC-yAQAvD_BwE. So its a pretty large case and I dont have to worry about room. The cpu cooler I will be using my cooler master, if I could find the attachments for it to use with the new mobo. I’ll have to check what power supply I’m running, I know it’s an EVGA super nova fully modular, but i dont remember the power output… I have everything else and I just need to uprage the main components and wait for the new 3000 series GPU’s to come out, and see what big navi can do too… But here is an updated list of what I was thinking. https://pcpartpicker.com/list/th8BGc only problem is that I dont have an older version of an amd cpu to update the bios on that mobo. So not sure how I’ll be able to do that. Also the memory, I’m not sure if 3200’s are good to go with? Are those ok?

3200 is fine. Actually with ZEN2 I think memory speed is less important than it was with the 2700X or so.

I have two of the Taichi Ultimate, it’s a great board.

Maybe grab board from here instead of the amazon link you posted (advertises compatibility/you can be sure it’s recent): https://www.newegg.com/asrock-x470-taichi-ultimate/p/N82E16813157834

I wouldn’t benefit from the features this board has over say the msi pro carbon - it’s really just the vrms; you’ll be in much better shape if you decide to drop in a 3950x in the future - but precious few reasons why you would for gaming. But certainly you won’t be ‘going wrong’ either. I suppose it would take much more abuse to cook your board if you let the airflow get clogged for a long while and ran it under heavy load, or etc - maybe better in terms of ‘set it and forget it’, or whatever.