I have an HP Z400 and I want to install a non-proprietary PSU inside, however, because HP has changed the motherboard + PSU layout, there are no alternative PSU's that you can buy that will work with the Z400... Unless a little tinkering is done...

You can see that the Z400 has an extra ground and 2 extra +12v pin, that a standard PSU does not have. Pins 12, 20, and 23 were changed from HP to make the system have a proprietary power delivery.

How would I add another ground pin, as well as 2 +12V pins? Would it be as simple as splicing a separate +12V and Ground, or would that possibly cause damage to the board/PSU for not sending/receiving enough power. Will the standard ATX PSU have 2 spare +12V and Ground pins inside the PSU? Also, on the Standard ATX PSU, there is a -5v on pin 20. Does the PSU care whether that is in use or not?

If you know the answer, and can help, i'd really appreciate this. The Z400 PSU is really shitty (less than 500W) and is quite loud.

Note: I know this will void the warranty of the PSU, Mobo, and whatever else is involved. I don't care.

These guys have helped me out in the past with a different electrical project of mine, so hopefully they can help me out with this, since they seem pretty knowledgeable. However, if there are any other smart people out there who also know quite a bit about this topic, please do assist! The more people that aid an idiot like me, the better! Thank you!

I think it's just time for a new PC man

are you sure they don't just make an adapter for it?

otherwise why don't you just lop the 24 pin off the proprietary PSU and attach the wires you need to attach to where they're needed? Granted I'm no electrician

You should have no problem just duplicating the inputs. All ground wires are connected together and as long as your 12v rail can supply enough current that should also be fine too.

For the ground it will work just by splicing the wire along its length
Idk how ur psu will fare at driving the additional 12v wires though... if it can handle it great! but I lack the required knowledge to make a recommendation.

@Streetguru I use it as my main server because I got it for free, and because it supports ECC. Not going to bother upgrading.

Can't find any power supply wiring adapters for it, sadly.

The wires aren't the same on the standard atx and Z400 PSU. They don't have the exact same ground/12v pins.

Couldn't you just find a more standard motherboard for your CPU?

@eidolonFIRE I did not know pulling the wire out would be as simple as pushing a tab in and pulling. I was expecting to have to have to guetto rig something. I want to do as little cutting as possible.

IDEA: Since the Z400 Mobo needs 2 +12V pins, and 1 Ground, could I take those from a molex cable, instead of splicing cables? The PSU would lose 2 molex, but at least it'll involve less splicing together wires.

@Streetguru I won't want to invest anymore money into the server, if it's something simple. A new LGA 1366 motherboard costs $100+, and i'm trying to keep the cost down on this server, because I could use that $100 for another 2TB HDD.

@eidolonFIRE Just found this image on the internet of somebody using 2 molex cables for the +12V and ground. Would something like this work better, and be safer? 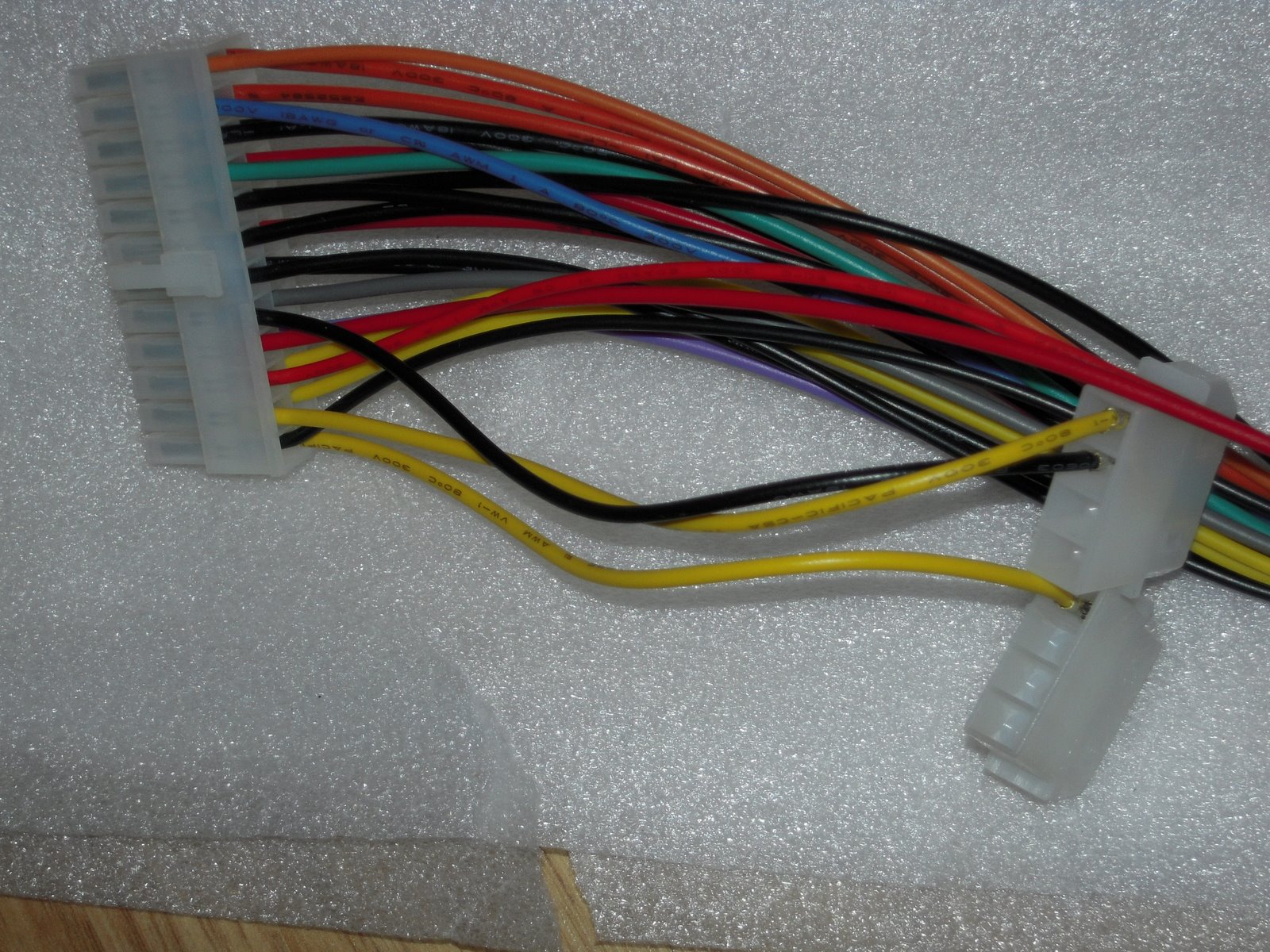 close up. one molex could be enough, used 2 just for sure

Edit: What about the -5V cable on the standard atx PSU? Will the PSU function fine without it in use?

splicing cables would give you the cleanest look... Using molex wires would most likely work for the 12v wires but you could just use the cable right next to the ground rather than trying to pull and crimp wires (more work than a bit of cutting and solder imo)

that'll do the trick!

the easiest way is probably to splice the 3 that need changed to an existing gnd/+12 on the new psu. it's easy with a couple of butt splices or solder/shrink tube.

If this is too complicated, don't do it.

yes it will work without the -5v wire only really old mobos use it. also I would recommend using the 12v and ground wires from another connector from on the psu.

How are your soldering skills?
if you open a psu you will see all the +12v originate from one point (rail) on the psu (multiple rail psu's are the exception) and all grounds go to the same point and so on.
A simple cut splice will get you by much better that molex connectors 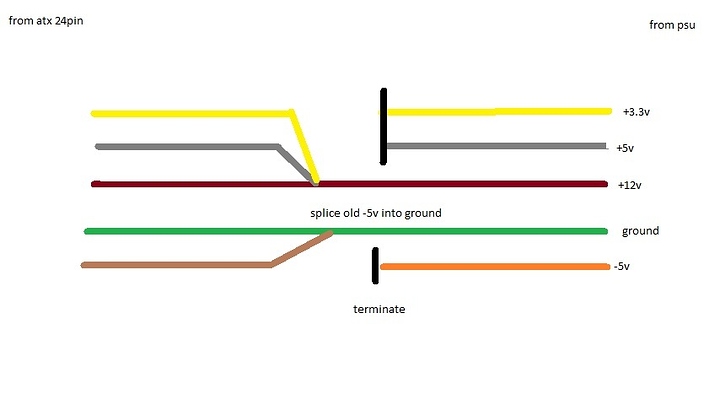 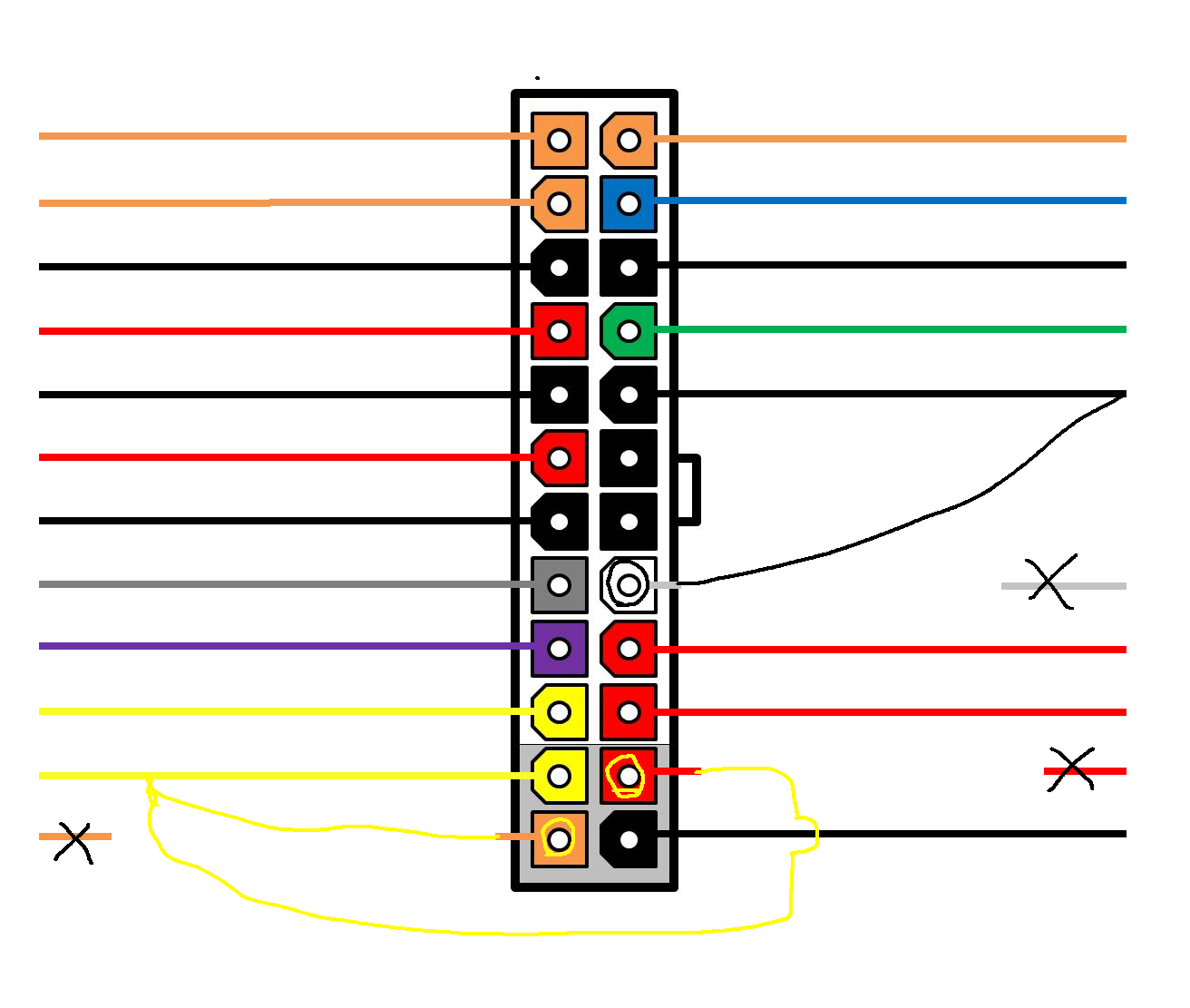 Cut cables near the PSU, solder them onto the correct rails, you technically don't even need new wires to do this.

The molex thing works too for the +12

So, I sorta did it my way, as well as took advice from some of you AWESOME commenters who helped me out, and got the power supply to work and not burn my computer. HURRAY! :D

What I ended up doing is just cutting 3 cables on the 24pin atx power cable (the one directly connected to the PSU) instead of making an easy-to-use-and-non-warranty-voiding-adapter, and added molex females onto it. So, 1 molex female has the ground and 1 +12v pin, while the other molex female has just the other +12v pin, that was needed. Everything that was not in use was taped up (albiet badly), and the machine was tested and booted!

Here are pictures of my very messy and dangerous mod, that somehow worked, ALL THANKS TO ALL OF YOU COMMENTERS! THANK YOU :D (I did read every comment, acknlowdeged it, and used it somehow, hopefully lol)

The next step to this project is to fine an actual reliable power supply (this one has lots of problems... mainly that it's missing a fan and isn't 80+), and develop a more "clean" way of doing this.

nice that you got it to work.
i would have suggested buying something like this


and just splicing the cables.
next page →