So Microsoft is intending to purchase Activision/Blizzard for a cool $68.7 Billion

I bet when the federal go ahead is finalized.

Feels like the gaming equivalent of Embrace, Extend, Extinguish. But i dont care anymore. The only Dev Team that I liked that Microsoft acquired is Obsidian. The only IP I care about that Activision still sort of has a grip is Sekiro… ActiBlizz is all about nostalgia bait these days…

Bethesda… I dont know… I cant shake off the feeling that their best work is behind them (Skyrim) and its all downhill from here, seeing what they did to Fallout 76…

All in all, this makes me worried about the future of AAA gaming, especially now that I am invested in Linux gaming. I dont seem to see anything worthwhile in the horizon apart from Elden Ring and Starfield. Elden Ring seems to be doable in linux as all FromSoft titles run prettt well in Linux. Starfield… I am unsure if MS will do shenanigans just bork its Linux compatibility.

This guy thinks it’s to convert mobile gamers to game pass, as the deal won’t go through until 2023. 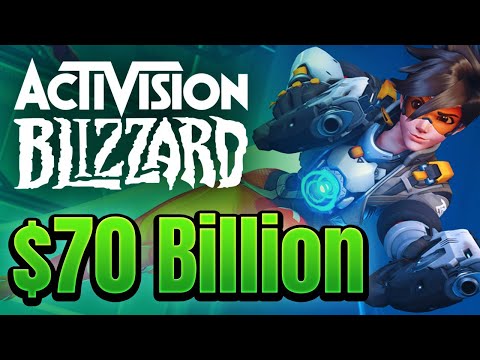 Other people who have discussed it think the acqusition is for cheap IPs.

The thing is, Bethesda is not just Bethesda. It’s ID, it’s Arcane, it’s Bethesda itself.
The same way Activision blizzard is not just Activision or Blizzard. There are so many studios and games, that AB is owning. It’s one of the big 3. AB, EA and Ubisoft. They aren’t called The big 3 for no reason.
Activision was formed back in the Atari 2600 days. Before the NES. That is how old Activision really is. Bethesda is nothing, compared to those guys.
And Blizzard being the insanely large company they are, there really should be some Nvidia/ARM kind of antitrust trigger going on somewhere…

Long story short - I don’t like it one bit.

When the public pressure is too large or when the bad PR starts hurting the company. Non of that is happening. They are reporting record profits after record profits. And the media is more interested in meaningless bullsh… than doing actual journalism, see also the sexual harassment still going on in Ubisoft after years of reports from victimised employees.

I’ve been gaming since my father brought home a Magnovox Odyssey Console way back when, then onto the Mattel Intellivision and then finally the VIC-20 and C-64 et.al.

One of my favorite games back in the C-64 days was Little Computer People by Activision.

When the public pressure is too large or when the bad PR starts hurting the company. Non of that is happening.

I wouldn’t say it isn’t happening, but compared to other attempts at cancel culture, Activision Blizzard stock dropped by ~30%.

Video read through the press release, and highlighted a good quote

As a company, Microsoft is committed to our journey for inclusion in every aspect of gaming, among both employees and players. We deeply value individual studio cultures. We also believe that creative success and autonomy go hand-in-hand with treating every person with dignity and respect. We hold all teams, and all leaders, to this commitment. We’re looking forward to extending our culture of proactive inclusion to the great teams across Activision Blizzard.

They are planning to clean them up, but it’s unlikely Bobby Kotick will be removed anytime soon.

More news stories on the topic

I wouldn’t say it isn’t happening

It isn’t happening.
If I am to sexually harass anyone I would be in jail, not a massive billion dollars company CEO…

They still have record profits…

Anyways, there really should be some Antitrust stuff triggering right now. Microsoft is becoming ungodly huge…

They are planning to clean them up, but it’s unlikely Bobby Kotick will be removed anytime soon.

I would imagine bobby will be given a very nice severance just as soon as Microsoft close the deal and are in full control. They can’t have the liability.

I mean, my own first reaction was that they have bought a sexual harassment company, not a games company, just based on recent auto completes searching for them it would seem that whatnthey are more known for these days.

They are getting huge but it is not anti competitive yet I don’t think, there are still enough alternative platforms, consoles, store fronts, developers and publishers to not tip that scale yet but it has got to be close.

The only Dev Team that I liked that Microsoft acquired is Obsidian.

Yeah, I always wondered “why can’t Bethesda get that controls, look and feel from New Vegas in Skyrim and Fallout 4?!”. Later I realized that New Vegas was developed by Obsidian, the best FO ever.

By getting the companies, they get the titles. If MS should have done anything. Buy the damn IP to the titles and release new stuff that way.

Leaving the companies with something at least. Buying the entire company, leaves the developers in a bad position.

It’s above and beyond anti-competition.

By getting the companies, they get the titles. If MS should have done anything. Buy the damn IP to the titles and release new stuff that way.

Leaving the companies with something at least. Buying the entire company, leaves the developers in a bad position.

It’s above and beyond anti-competition.

There is a problem with that concept. For someone to buy someone has to sell.

Someone made the conscious decision to sell the company.

Former folks from Black Isle Studios know their stuff… I was really hurt when Outer Worlds decided to became a times Epic exclusive but from my understanding, its not a studio decision, but a publisher decision… (same with deep sliver and metro series).

The anti-competetive law. Doesn’t seem to be in effect.

Is it so hard to buy rights to their titles? Even upcoming titles if they want to be that fracking annoying. Instead of buying the entire companies, leaving the option of the company itself innovating new titles

Microsoft actually became successful by looking the other way while teenage boys pirated games in the 80s/90s. Bill knew clearly then that if you get young people addicted to the equivalent of crack cocaine, then when they grow up they will be uncritical consumers of your (highly profitable) enterprise products.

Nothing has changed. Humans are still humans. As long as youngsters are gaming on Microsoft-owned platforms (like Windows and Xbox), then you end up with generations of paying/exploitable customers/consumers down the track.

Recently, after huge investment into Proton, Valve dropped the SteamDeck. It now owns the world’s largest game distribution channel and is making a hardware platform that looks like it will compete strongly with Xbox. No Microsoft products are needed, and even “Windows-only” games will run on the SteamDeck. Microsoft isn’t getting a cent from the entire revenue stream — they have been completely cut out.

Microsoft needs to keep luring vulnerable kiddies into their ecosystem in order to have adult customers a decade or two later. Valve thus poses a slowly-intensifying existential threat to Microsoft.

Valve has basically declared war on Microsoft in the console arena. Microsoft had no option but to retaliate in the only arena it could — game distribution.

If Valve was a publicly-traded company, Microsoft would have executed a hostile takeover, but it isn’t — Valve is privately-owned. I don’t think there’s a sum on Earth that would be big enough for Gabe to sell out. Gabe is not Notch. This is personal.

Yes. Fantastically hard. As in the eyes of business the titles make the money.

Devs are replaceable, and any game dev can crank another piece of C.O.D. (Cash on Demand). There is no vision any more in a lot of the big titles.

So yeah MS likely did buy the titles and got the company as part of the deal. Not in the exact wording or legal sense but it is absolutely the titles they wanted.

Unfortunately that is not something traded. That
would be like Ford Buying the 3 series from BMW, they just won’t give you the one product you want, you have to buy all of it to get any.

Devs being replaceable is sooooo messed up. It’s basically a hit’n run on people’s lives. Even if their code quality is above and beyond, that doesn’t seem to matter as much as it probably should.

Why should it? Well there are contracts involved, that involve all sort of bonuses and benefits. Not just that, the actual devs should support as per contract their own titles or whatever they are doing. Instead of having select few people pick and chose what everyone else does, the devs themselves should be involved, signed by a contract.

Instead they do the same as is done to them, resulting in hit’n run on the public in code instead of being actually involved in whatever they are doing. Pointing to higher up’s which seem to be way impossible to get in contact with in any way possible.

Instead they have scapegoats, including companies full of them. To take the trash upon them, for them. Making actual contact with anyone remotely technically skilled,. Impossible.

Oh man, if you were forced to choose between epic and microsoft buying your next favorite game company, who would you pick?
I’d probably take MS, as they wouldn’t lock it down to the EGS.