This thread is meant as a hub to share projects related to electronics and microcontrollers, talk about tools and parts, taking a look into things, troubleshooting circuitry and so on. 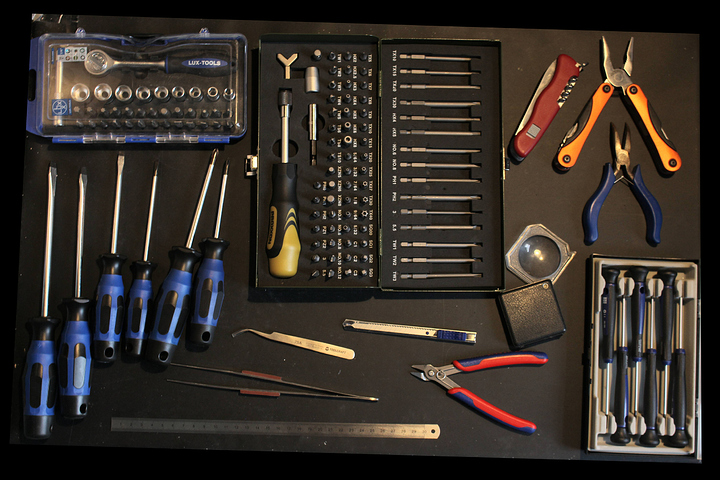 Missing from the picture:
Multimeter, variable bench PSU, soldering iron, a bunch of test leads, prototyping board and some more small bits…

I have stated this before

I plan on posting there any questions and experiences I have for a project I am building. Essentially I plan to build a prototype device with a security camera, and some way to gather metrics about grass height, possibly information on the soil itself. I will need to do research on what makes grass grow better.

At some point when the prototype is finished I will try and make another prototype but with a 3D printed case and try and write some code to integrate it into a larger system my team is working on.

So my first step is ordering the right supplies for this prototype.

I should learn KiCAD. Eagle is being a pain and I think my license is about to expire anyway.

And finish my fan hub project at some point.

Took a look inside the control unit of a crosstrainer. Was on the search for some longer cables and switches. Kind of a dumbster dive.

Front of the unit. Nothing interesting going on. Big LC-Display (or LCD for short), knobs, buttons and a USB port. 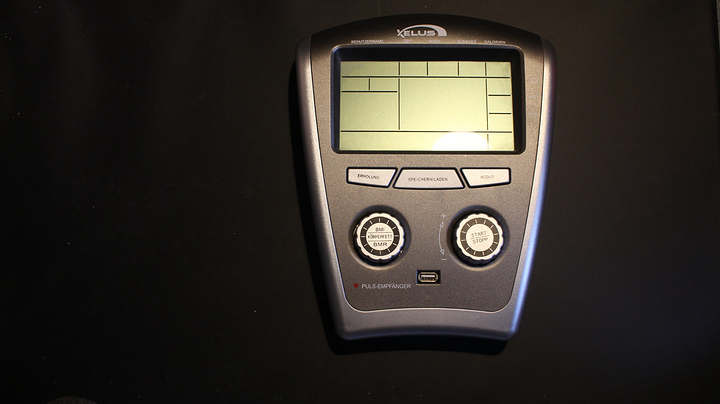 However the internals are quite interesting: 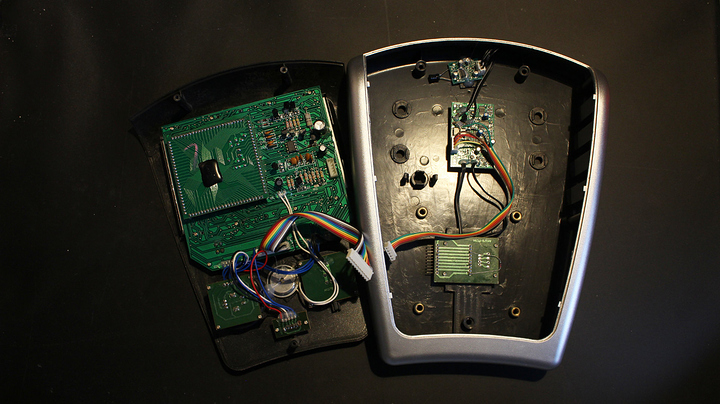 4.jpg1923x1080 361 KB
A few things to note:
Plugs everywhere! The whole thing basically is plugged together! No idea why anyone would do that, no consumer would ever take a look in here or service anything. Note that all components are through-hole making them easier to solder by hand.
And all the chips are name brand, all TI (texas instruments) or IR (international rectifier).

Now it turns from interesting to confusing: 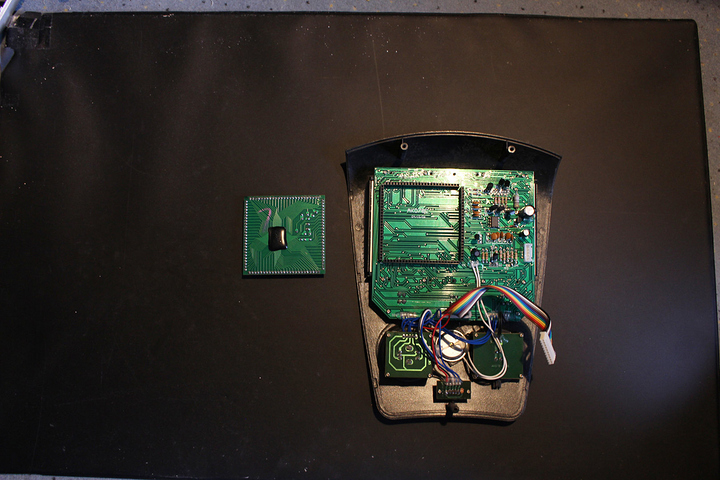 8.jpg1620x1080 262 KB
The black blob covers a microcontroller on the PCB making it cheap and easy to connect to the board. However someone seems to have been desperate and put it in a socket of sorts. So there are 4 bars of pins serving as a “cpu socket”.

Remember the USB connector? It is physically a USB connector, electrically, it is not.
Took a look into the “USB”-dongles… 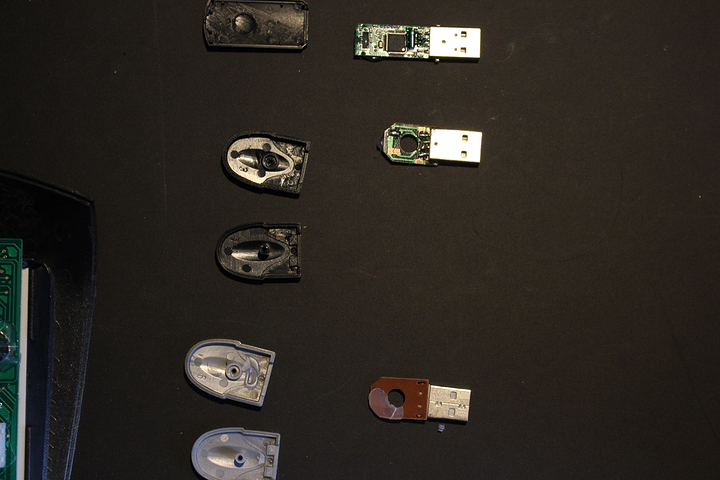 17.jpg1620x1080 221 KB
The top one is a real USB stick. The two below that are NOT! The 4 lines in there end in solder pads. In the one I turned over, GND and +5V (the two outer pins in USB2.0 connectores) are connected together. Plugging that into any computer will probably render that USB port unuseable.

Here is a close up shot. I marked the two rails. The lower most soldering pad is barely connected (checked by probing it). Would probably allow for 3 A or more to flow. 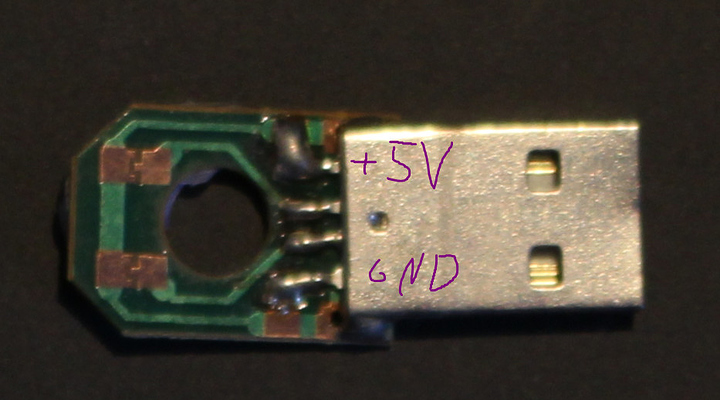 Booty:
I got about 3m of “rainbow cable” wich I will put connectors on and use in some project: 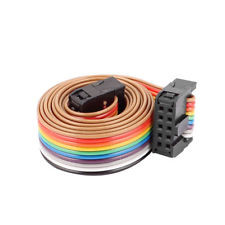 2x 3.5mm "mono audio jacks"
And a bunch of wires plus some things from the controller.

As I work a lot with arduinos and ATTiny controllers in general, I use “Fritzing” to design the circuitry and write the code in a single programm.

CAD wise, I use FreeCAD or Fusion360 depending on how I feel.

Cheapo chinese snips will do for the most part. However I like to have grips that will not turn the frogs gay.

dub it the thiccboi micro 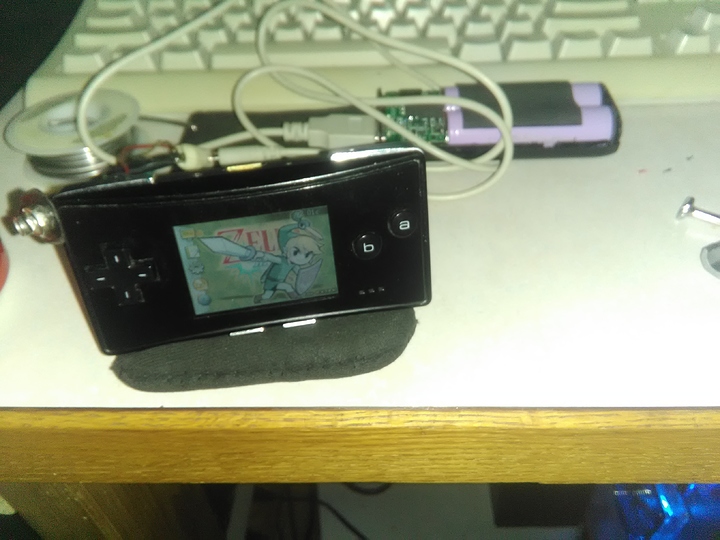 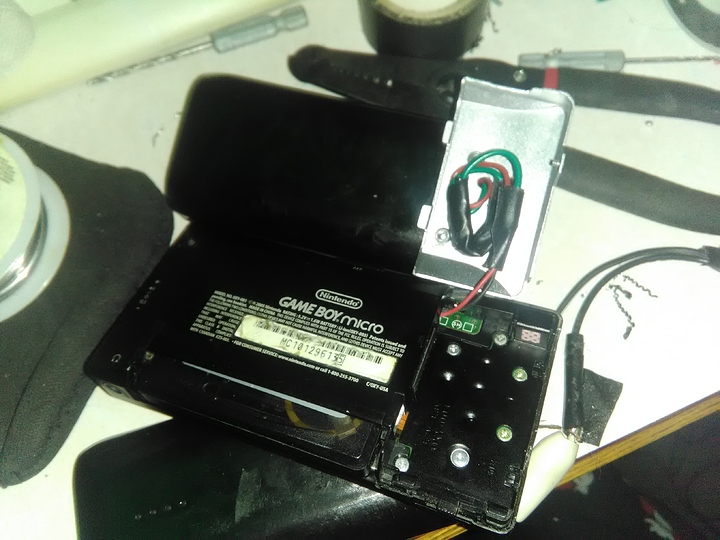 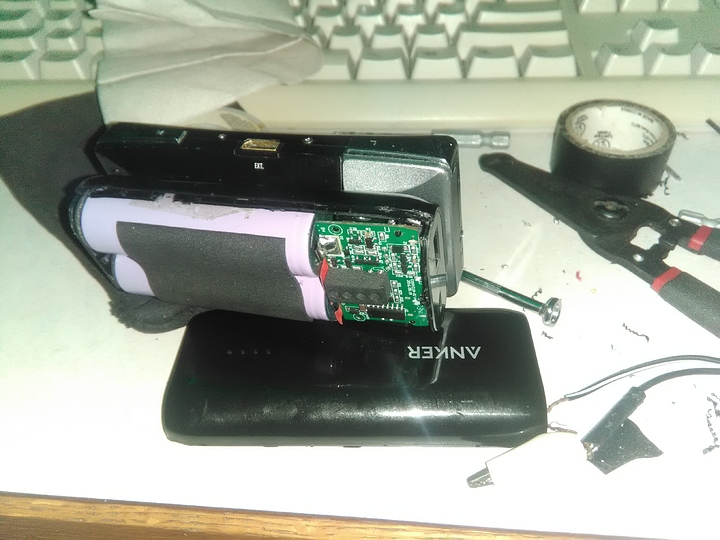 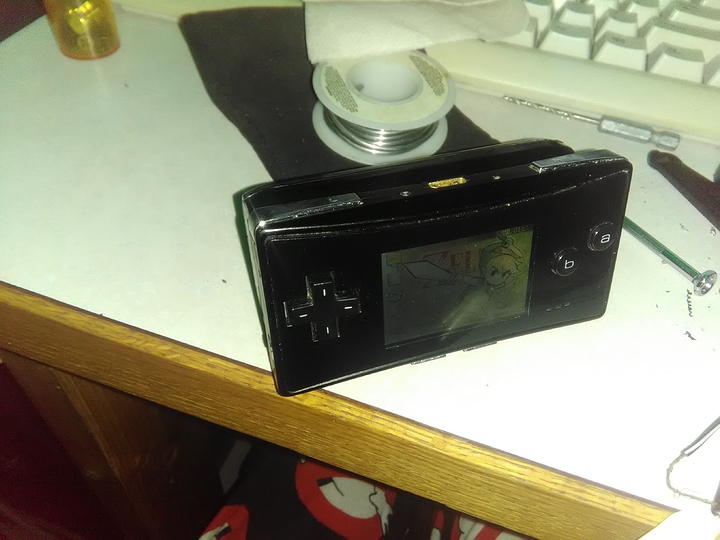 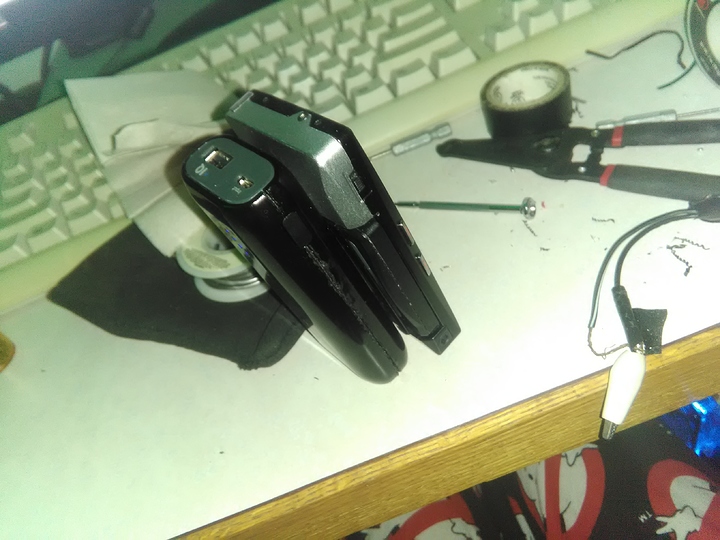 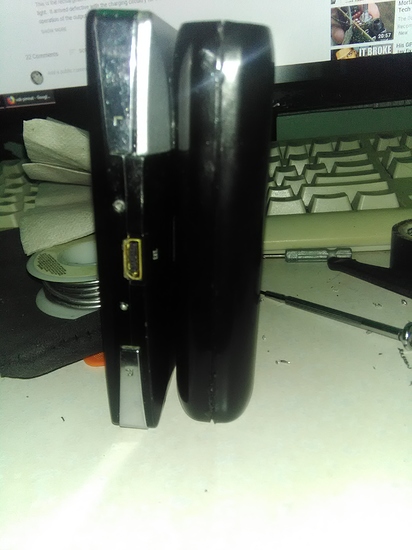 attached a 6700 mah battery bank, to the back of my gameboy micro soldered onto the back of the usb port(no pics off that part cause didnt wanna mess with the wires much since didnt have any hotglue/silicone to hold them onto the port and is no physical conection other than the little bit of solder

circuit is just 2 diodes in series, to get the desired voltage drop(since it worked out perfectly) to be 5v with 2 silicon diodes being ~0.7v forward voltage leaving ~3.6 across the gameboy, which has a normal lithium cell which nintendo states at 3.8v

and as long as dont go open circuit or go over 2amps(which is also the max power the bank outputs) voltage should be pretty stable, didnt use resistor because no idea what the actual power draw over time is, or have a modern scope to be able to get a graph to show me, so if the current draw varies so would the voltage, but being a arm computer designed to be mobil assuming has some sort of power saving features, and with the sleep mode and stuff, the power draw could vary enough that could have a bad time with a resistor,

and the current draw is so low(for average) that cant really use a regulator although i did have a little ti one i could use, but efficiency would be terrible like 70~80% at best

Would anybody know any good books that cover the fundamentals as least. I would like to get at least get a overhead explanation on the development flow and the terminology? 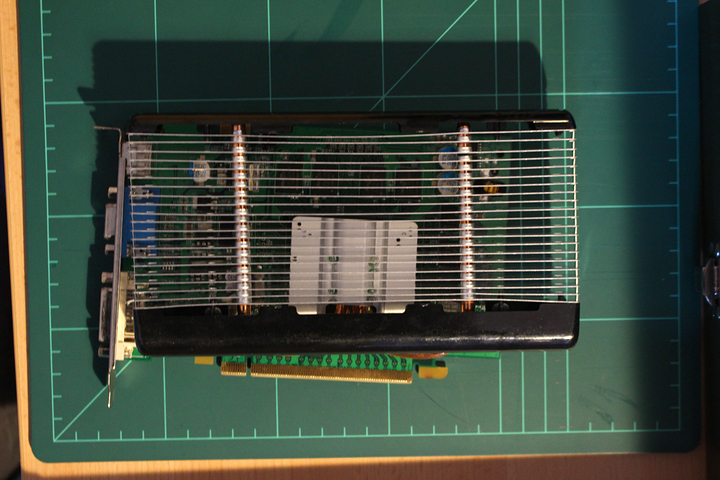 Look under the hood 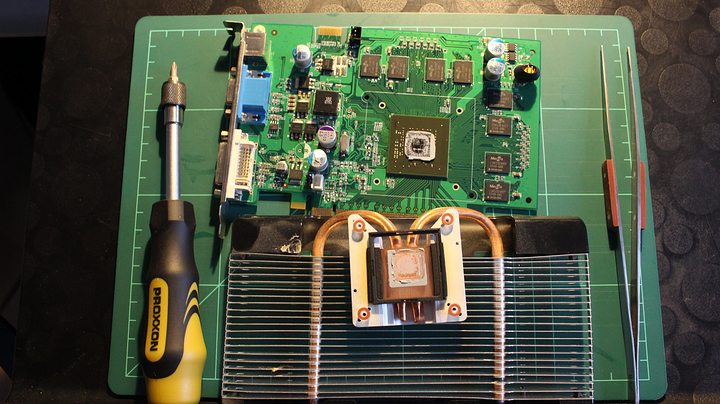 And 4 out of 5 capacitors have quit service. How unfortunate. 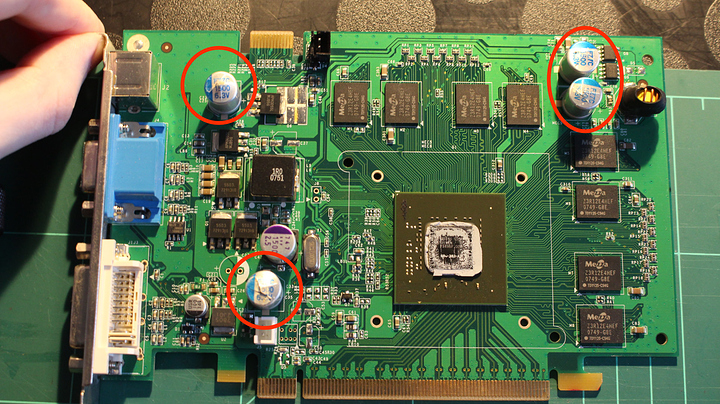 After an hours worth of cleaning old thermal paste, dryed electrolyte and old rubber of, it looks like this: 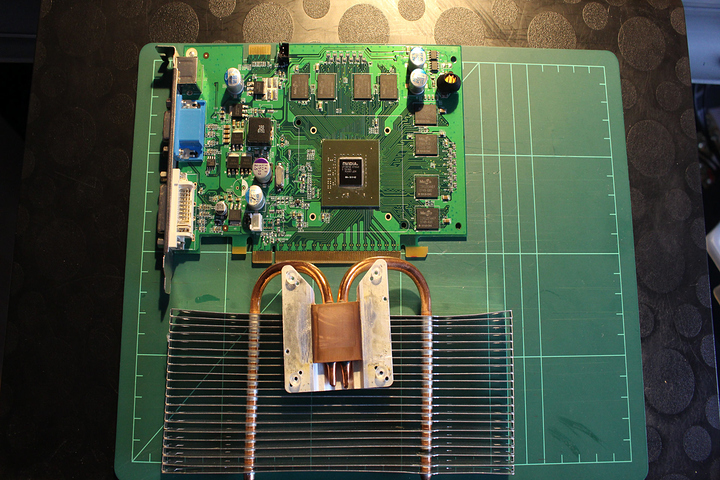 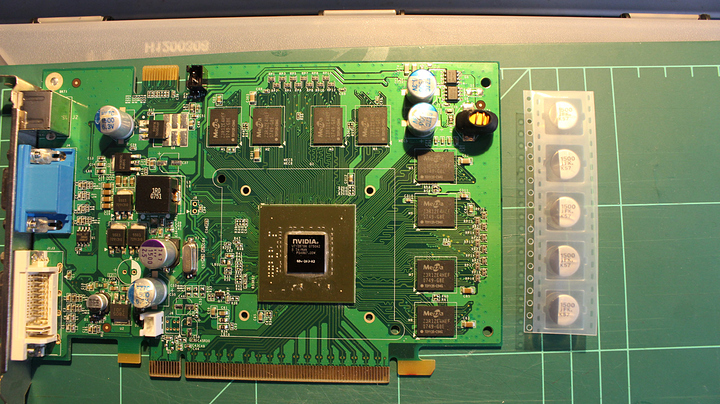 How did you know it was the capacitors damaged?

There are weaknesses built into the casings of the capacitors so they fail in a controlled manner. And those blew on four of them. You can see the electrolyte spilling on them. 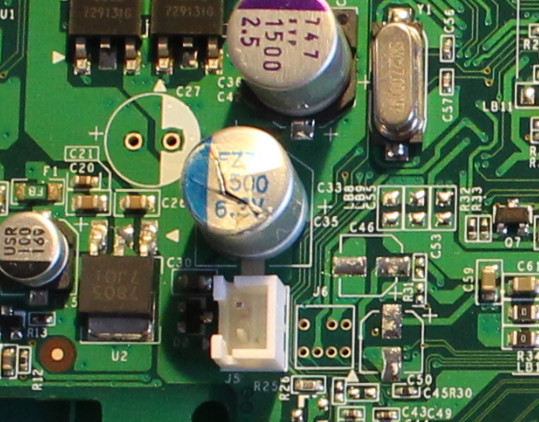 No idea if it is just the capacitors beeing shorted or if there is damage to the core itself.

What tool are you going to use to remove it?

Just ordered a table to work on the future project I have in mind.

Also thinking I am going to get started with an Atmel MC since the book I ordered uses them.

Where can I order a kit from?

What kind of kit do you need? General breadboard and prototyping or some specific modules?

I read something about how in the embedded engineering process the first step is the engineers will order a kit that can be solderd together. Is there a way to make a design and ship off an order for its manufacture or how does that work?

For option 1 how do I take a bunch of generic parts and solder them together assuming I had a design and everything?

I have a bunch of boards that you can put components in but I am unsure how they connect together since there are no wires in the PCB itself?

Looks like some sort of wire that is being soldered onto the the back?