I am looking to build a NAS/server for jellyfin, torrent automation (all the arrs) etc.

I will be serving media and transcoding for an RPI client as necessary.

I’ve never built a server before but plenty of PCs and I’m currently using my gaming PC (2700X - RTX 2070 0C) for the above mentioned tasks.

I’m trying save money on power because energy costs are rocketing, so I’m looking for as low idle power and full load as possible.

On the Celeron side I’m looking at a mobo on Aliexpress but I can’t include the link here but the exact description is;

Ideally though I’d like more beef than the 4c4t and max 3.3Ghz that the N6005 has to offer… as I have a nasty feeling sure it’s going to start to choke when I’m torrenting and serving media at the same time

I need 1-2 1080p simultaneous streams going, max. It’s a small household but as I say I’d love to have some extra headroom for doing some home automation or something in the future

Any suggestions are super welcome

If you were planning for just a NAS, I’d recommend the RockPro64. For Jellyfin, while it may work as both a NAS and video file streaming box, I would suggest you just get an Atom core-based Celeron, like the J3455 Bay Trail, J4125 Gemini Lake, or N5105 Jasper Lake.

Reading further, it looks like you already found a motherboard to your liking.

Ideally though I’d like more beef than the 4c4t and max 3.3Ghz that the N6005 has to offer… as I have a nasty feeling sure it’s going to start to choke when I’m torrenting and serving media at the same time

I think it would be fine. What you want though is GPU acceleration if you are going to live transcode on Jellyfin, so grab an RX 570 or or 6600. I don’t know if the 6500 has video encoding capabilities, I know for sure the 6400 does not. Not sure how capable is the iGPU from Celerons though, it might get you by.

Worse case, if you really feel like you need more than that, get a Ryzen 3400G or 5600G and use the built-in GPU for transcoding.

Of course, you can do transcoding on CPU, but that can lead to buffers and I’m not sure how well that scales with more than 1 stream.

I’d suggest you look into Odroid N2+, which is the Home Assistant’s officially supported SBC. If you can split the workloads into an Odroid H3+ for Jellyfin and Odroid N2+ for HomAss, you should be fine.

When it comes to the types of tasks your talking about the n6005 will handle everything you want outside of video transcoding.

I would be looking at the i3-12100 not the E3-1275L V3 way newer faster and more efficient. If waiting is in the cards waiting for the i3-13100 which is rumored to be a 6 core part. not to mention the igpus in either generation core part leveraged for transcoding will make them way faster. considering you can get boards with ecc support for the 12100 with w680 chipset i would not look at old xeon’s.

Another thing to consider when building a low power server is drive power consumption each 3.5inch drive when active will be consuming 3-5watts so 4 drives is 12-20watts itself. 8 is 24-50watts. If your targeting total low system power your drive choice and number has almost more effect at idle or low cpu usage as the cpu itself.

What are minimum specs as far as storage, networking, etc.? Would one large NVME SSD do? A single 1Gb NIC? A decent used laptop might suffice. Integrated battery backup.

I’d say replace the RPi client for something that can handle your media and avoid trascoding which will save a lot of money and lower your power bill in the end. By doing so you can just serve your media stright up using NFS, SMB, UPNP (DLNA) using Kodi as a frontend without any hassle and you don’t need a beefy CPU. A simple ARM SoC will be more than enough to handle 1Gbit connection.

As much as I would like to recommend the RockPro64 I think 4G of RAM might be a bit optimistic if you’re going to use ZFS and torrents at the same time but you can quite easily try that out in a VM using HyperV or whatever you prefer as memory usage on amd64 and aarch64 is going to be similar.

If you’d use FreeBSD I’d just do a sample ZFS array, install Samba, qbittorrent (-nox) using libtorrent 1.2.X (preforms a lot better than transmission and rtorrent), Gerbera if you want DLNA and watch how it performs in terms of memory usage.

If you want transcoding go for something as new as possible, Intel i3-12100T or i3-12300T would do fine and if you need more an ARC video card should be a decent combo.

If you’re looking for automation later on get a separate box or possibly a VM if you’re going for the i3-route.

Wow, so helpful thanks guys, super glad I found this forum!

I didn’t realise the 12th gen i3’s were so competitive price wise - that’s a done deal! Any suggestions of a good low power mobo to pair it with?

I think I can make it work with all that without spinning rust, as I don’t need that much storage, 3.5 TB should be enough

what would you suggest as future proofing networking wise?

I love my RPi4 and I just bought another so that’s non negotiable lol - but I must admit what you say makes perfect sense however the plucky little i3 in the blue corner should be able to handle all the NASsing, Arr(s) and maybe a smidgeon of future home automato?

Out of curiosity, what are you feeding your RPi4’s that needs transcoding? AV1, Hi10P?

RPi4 does support HEVC decoding and “most” old weird formats should work fine even with software decoding. That being said, I’m comparing to my Allwinner H6 and Amlogic S905X boxes which plays pretty much everything I throw at them fine except Hi10P (software decoding). Both are slower than a RPi4 in raw processing.

Crazy idea: get an Nvidia Shield as a client instead of the Pi and your transcoding needs go away.

Any suggestions of a good low power mobo to pair it with?

I’m a fan of the MSI B660M-A Pro with or without wifi, I just saw the non-wifi for $120 over on amazon. There isn’t voltage control for the 12100, but with CPU Lite Load set to 1 and full C-states enabled it will idle on less than a couple watts and max out at 48W. You could probably limit boost clocks and/or power limits for even more efficiency.

If you’re transcoding, not sure if you’ll need it, but 12500 has the better iGPU with two encoders instead of one.

As for motherboard, personally I’m iffy about 24/7 hardware without ECC so I’d go hunting for the W680 MW34-SP0. This chipset allows 12th gen CPUs to use ECC RAM. That Gigabyte motherboard is the only DDR4 W680 I’m aware of, but ASRock Rack probably has something as well, haven’t checked.

ASUS has been known to have a particularly weak VRM solution this generation, which admittedly isn’t an issue at all with a 50W chip, but I have actually heard favorable reviews for the Biostar B660s.

I’ve been thinking about this as well but the TDP of 12100F is just 48W so the VRMs shouldnt be unreasonably hot?

Also IIRC 1Gb onboard NICs should draw less power than the 2.5Gb variants, so keep that in mind.

Would it draw less if both are only doing 1Gb anyway though?

I think I should be similar-ish (no actual data to back up that though). One would think the total power needed to transmit, say 1TB of data should be equal, barring losses from heat and gains from newer chipset power efficiency.

With this, I hypothesize that a 2.5Gb NIC running at a 1Gb speed connection should be more efficient with power, because I assume newer chip fab technologies would be used with the newer 2.5 Gb standard. 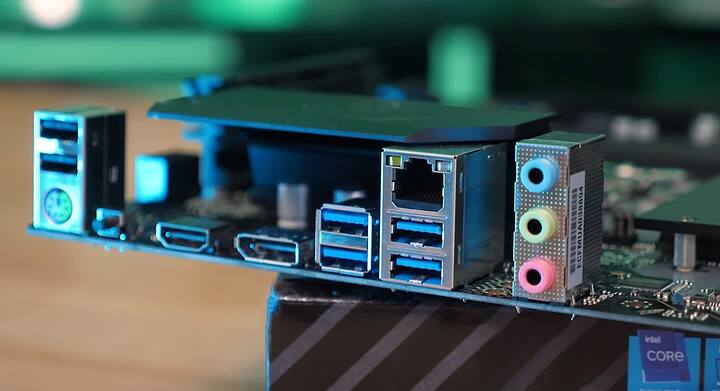 Our first look at VRM thermal performance of entry-level Intel B660 motherboards. On hand we have models boards from Asus, Gigabyte, MSI, Asrock, Soyo and Maxsun. Pricing...

1Gb vs 2.5Gb will be negligible, 1Gb will use less however I would value a decent NIC over a cheap as chips more.

“After taking a look at each board and putting them to the test, it’s quite clear that the best affordable motherboard is by far the MSI Pro B660M-A.”

This is a direct quote from your source, I see zero benefit in using any ASUS B660 when there are other better choices for sub-$100 (I’d go for Maxsun or Soyo for ultra budget), but also for only $20 more you can get a quality MSI board that can handle just about any chip it can slot. I’m not sure why it having a 2.5G NIC is a deal breaker for you, maybe you could explain your reasoning so I can better understand.