Right, so I recently set up my computer with openSuSE, pretty good, some glitches every now and then but overall I can't complain, but one of the problems I ran into was that some programs like Steam really don't let me select my secondary 3 TB hard drive to set up a directory for games on there.

As you can see there is no way of selecting anything but the main SSD drive. 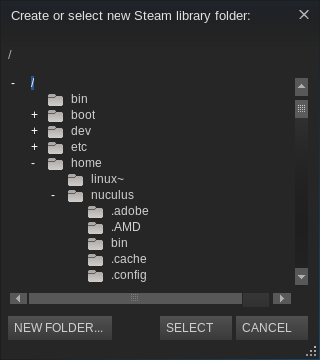 Any idea why this is?

Where is your secondary drive mounted? Check under /media/user_name

There is your answer... just navigate to /run/media/nuculus/DATADRIVE1 and it should work...

That makes sense, I was looking to select the drive first (windows habit I guess) but now I have another issue

My guess is, it's just an issue of permission, any ideas?

If it's a problem with ownership, try

if that doesn't work (and you don't mind slight security issue)

My bad, but still invalid group, maybe I've gotten something else wrong

You should have made your HDD your home folder and then install games there. In Linux it is easier to get a seamless file system

Hmm, yes probabyl but it is also a shared drive with a Windows OS on another SSD, I wasn't sure if that was going to cause any problems with access so I did it this way.

That's a silly idea... Usually storage such as this is shared with Windows and/or other OS...

Well then make one partion for suse and the other NTFS for windows. Not that hard.

Why would he do that, when one of the core features of unix like systems is treating everything as file/folder? Partitioning HDD because of wrong file permissions is, honestly, quite unrefined approach.

It's actually mainly a file storage and I need to move data between the two OS's and I can't access the data stored on linux side when I'm on windows, but maybe I'm missing something.

Yeah.. but that way, he will be able to access that space only through linux and not windows, which he probably dualboots. We should be trying to fix his problem, not change the way he uses his computer, nor having him back-up his files and repartition a secondary harddrive.