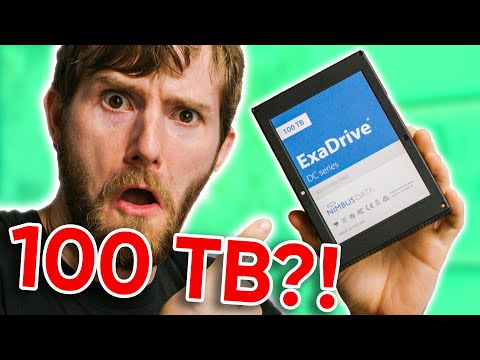 BTW, the speeds SUCK, limited to SATA 600 on that thing.

Would be cheaper and an order of magnitude faster to build a RAIDZ2 out of NVMe U.2 drives on an Epyc platform and connect it via 2 x 40 GbE to a client system.

(Yes, yes I know, it’s all about storage density)

But Linus did claim that if you used one of those Storanator 4U racks you could have near 5PB raw storage.

I think the idea here is for data centers that need a higher storage density then most would need.

However I do like how he thinks that 100TB would store my entire Steam library.

I’d really like to see a use case for that thing. There must be someone who is space constrained and needs fast access to just okay-ish sizes chunks from a ton of data.
And you need more density than those 2U 1PB flash machines that exist.

Not arguing that there isn’t one. There are probably several.

I didn’t get all the way through it but did he mention power usage? That could be part of it for data centers. Less racks is less power already and if they use less than spinning rust combined with using less of them that could add up for them.

Yes, for data centers the use of these 100TB disks would considerably save on power costs. Especially seen over the total lifespan of the drive. I don’t know what the power consumption is of this unit, let’s assume it’s a bit higher then a regular HDD, say 20W vs 16W for said HDD. To get the same capacity of the SSD you’ll need 7x 16TB HDDs, each using 16W. That’s over 100W, vs just 20W for the SSD. So that’s a saving of 80% already. An average server uses approx 2.5-3kW and a 42U rack has at least 10 of those. Taking in account CPU overhead and other ‘fixed’ power consumption, I reckon data centers can save approx 65-70% on their energy bills. Which is easily exceeding the 40k price tag per drive over the 5 year warranted lifespan.

So you save like 3 times for every power saving.

Just the fact it has been made !

It will get used by businesses and improve over time. If im alive in 10 years I will have one for a boot drive that costs $1 per TB

I don’t know what the power consumption is of this unit, let’s assume it’s a bit higher then a regular HDD

For flash storage? With no moving parts?

Or a satellite going to spaaaaace

Yes, 'cause Flash chips do use power and there’s a lot of them inside the box

I’ve deliberately been conservative with its power usage, should it need less power then I calculated with, the savings will be even higher still!

Power consumption per the datasheet is 15.2 watts read, 16.8 watts write, so 16 watts average.

Compare that with a 16 TB seagate drive which is 5W-10W depending on usage, that is ~25%-27% of the power draw from the disks alone (for the same storage). Plus the power draw of 4 separate systems into one, less cooling, etc. Not bad.

Of course, 5 Petabyte in a single 4U rack is nothing to sneeze at. I wonder however how many m.2 drives you could theoretically fit in a 2U enclosure, angled upwards with each being hot-swappable. With 8 TB per drive, you could probably get 10 PB on a 2U space if you really tried. How the lanes etc would be setup, however, I have no clue…

I was going to reply earlier. But it was JWTFV.

Linus has some good writers now and the video was interesting to watch. Linus added drama. But the info.

It brand new impressive density. Im sure it has a market. Linus’s script laid it out.

How soon we forget when SSD’s came to market for the first time and size vs prize was a thing . We all screamed it so expensive !!!..it’s sand and it will win storage and thinking.

Compare that with a 16 TB seagate drive which is 5W-10W depending on usage, that is ~25%-27% of the power draw from the disks alone (for the same storage). Plus the power draw of 4 separate systems into one, less cooling, etc. Not bad.

Agreed that factoring in overhead and other sources of power usage would net the data center serious coin in savings using these disks.

IDK what kind of data set you would need a license for each box that just holds data, anyone have an idea? Usually it would be the processing computer side.

Was wondering the same: Are there licenses where you have to specify that mounted volume xyz is local and not attached via ethernet?