I’ve seen CPU cores, CPU socket and even RAM limitations / licensing, however I have never seen a license requiring you to have “at most X amount of disks.” I would understand if you could only have X amount of capacity, but not of disks, so either Linus (or rather his writers) pulled this argument out of their a$$3$, or there may really be something with such a licensing. I will, however, give them the benefit of the doubt and assume I am ignorant, but I really want to read such a license restricting the number of disks you can use - and how you can’t just bypass it by having a network mount in a NAS / SAN.

Tbh, if there is a way to charge, I would not discount the idea that Someone will, even if no-one takes them up on it… and you never know, some gubbermint pencil pusher might take a duffel to sign up some bogus contract…

watching the vid, I presume each of the 20TB daughter boards does not work independently, but the setup seems even more odd to go standard SATA, rather than NVMe to outer connector, then SATA / SAS inside. Or even NVMe inside.
Odd.
Compatibility?

Or a way to ensure it’s impossible to wear it out within the warranty period.
Linus mentions it takes ~ 2 says to fill it up with sequential writes. If it was nvme they couldn’t market it with no limit on the amount of writes it can handle. I don’t think that’s why they equipped it with a sata interface though.
The point of this isn’t speed. But extremely dense storage with better latency than an entire hdd array of the same capacity.

well, you look at the tear down, and it is literally an array of ssd slices.
Maybe not fully independent disks, but a very high chance of parallelisation.

But I think it has more to do with it needing surface area for all those nand chips, while still fitting into some existing pc form factor.

It really looks like a loss-leader / first to market headline grabber.

which is fair enough

I think that they used a SATA 6 Gb/s interface for its external connection since on the one hand as mentioned in the LTT video this way they can limit drive write speeds and can advertise them to have “5 years unlimited writes” which doesn’t mean much then.

But on the other hand I think the crucial point for SATA 6 Gb/s is reducing power consumption and heat dissipation by lower write speeds: I think I saw in the video that it didn’t even hit SATA 6 Gb/s limits.

The NAND would probably destroy itself and the controller if the packages were allowed to be written to with their actual possible speeds via PCIe 4.0 x4 or 3.0 x8 in that 3.5" form factor (just look at the extreme heat dissipation/power consumption differences between 2.5" SATA and fast M.2 NVMe or U.2 NVMe SSDs).

so if this tech demo gains some Real interrest, prehaps Gen1 might have a faster bus, and heatsinks/soaks?

Well it would be a great use case for these fabled graphene thermal pads that have something like 1000 W/mK in the z but shitty 10 W/mK in the x and y axis.

It’s form factor is a hard drive and it performs as well as a HD but its 100 TB.
Im sure it will get noticed its x5 larger than the just coming out now HD’s 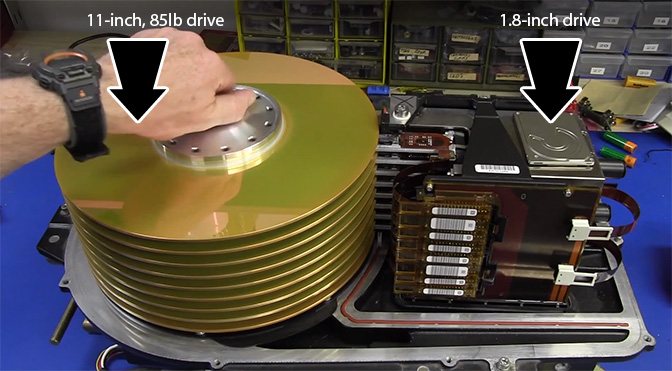 IBM 3390: The world's largest and most expensive hard drive teardown -...

If you lived through the '70s or '80s, you probably remember a time when technology was big. Case in point: The IBM hard drive pictured here, which weighs in at 38.5kg (85lbs) and stores a grand total of between 1 and 2 gigabytes.

Yeah I remember working on some CDC drives back in the day during my time in the USAF.

The smaller one was only 80MB and the larger drive stored 300MB, these larger ones were used for the ground data and such.

what’s one of those Grandpa?

Well actually, you do know that they had a sectoring on them Floppies back in the day, be it soft or hard sectored.

I also remember working on the older hard sectored Floppy Drives too, when you looked at the inner ring you could see the holes in a ring around the rosies so to speak for the drive to know where the next block of data was located at

Is that once you upgraded from Punch cards, to the new “Magnetic” technology?

4k 1q1t is a little lacking though…

Should have got Tesla to bank on the wireless power delivery. that shit was super dope