Killed Cortana and now updates and search bar are broken

So after searching the internet for a way to stop Cortana from running I came across a method that worked. After ending the Cortana task in task manager I quickly rename the folder located at:

Unfortunately this also prevents my system from updating and disables the search bar. Windows even recreated the folder I renamed which was weird, but it still doesn’t function. Was wondering if anyone knows how to undo what I have done.

I would attempt these?
https://www.digitalcitizen.life/how-reinstall-all-windows-10-default-apps-powershell

Configuration/Administrative Templates/Windows Components/Search/Allow Cortana set to Disabled is the GPO setting you wanted for future reference.

Deleting a system app isnt as easy as just reinstalling it. You can reinstall all the windows 10 apps pretty each, the core system apps not so easy.

You could try re-registering all the apps in powershell

(just noticed its in the above link) this probably wont work.

I have all the windows apps in a package from MS for this as well. i don’t think it includes cortana for the same reason as above.

Reinstall… cobbling back in often does not work.

It it possible to remove cortana and leave updates functional but it needs to be handled manually or cortana will be back. Due to the tie in between cortana and search , I personally do not want that.

Thanks for all the replies. I managed to patch it back together with these commands in powershell (really don’t know what these do but it worked

even if you disable the Cortana assistant, you will still see it as a running process in task manager in windows 10. for whatever reason, MS has labeled the basic search and indexing UI built into windows 10 as cortana in task manager.

you should just be able to disable the cortana in system settings app without anything further needed to stop it from doing its thing.

if you’re trying to strip down a lot of the telemetry and spying that happens in 10, there are several PS scripts floating around that will to the trick to varying levels (i would definitely look at any PS script you grab online before running it though)

After I renamed the file Cortana could no longer start up. But the file cannot be renamed unless the task was ended. That gave me half a second to rename the file which prevented Cortana from relaunching. Unfortunately it caused more problems than it fixed.

Give it a little time… maybe you got lucky.

Yeah, they allow you to turn off Cortana, but W10 still contacts Bing with every local file search. To fix that, you need to block her in your firewall.

Psst. switch to the dark side, the penguin side.

I do run Linux primarily. Still refuse to ditch all my native Windows applications though. I’m no freedom preaching zealot but Windows does get on my nerves some times.

What applications are you running that you really need windows for?

Windows is not the beacon of all evil.

If you look in my bio, I still run a dual boot system. And it’s not a loaded question, its a legitimate question that varies for every person. In my case? All of my needed tools for work will run just fine under WINE, I only ever keep the windows partition around for SLI gaming or until some fix is found for issues like steaming errors from certain addons for WoW (like TradeSkillManager).

I don’t use Ring Central, GoTo Meeting, etc. Never had a need nor the requirement.

Good luck with an interview to your dream job when they send you an invite to a virtual meeting but your made up morals prevent you from connecting. Yeah, go ahead and suggest Discord to your future CTO and senior Engineer.

What’s with the snark man?

its a legitimate question that varies for every person.

About the Windows category

Do not turn the threads posted here into windows versus linux threads. Those threads that become that will and can be locked. Stay on topic to what the original first post in the thread is about.

What’s with the snark man?

See above. The Windows section isn’t here for people to spread their Linux propaganda. It’s to ask questions or seek help about the Windows operating system.

I’mma just gonna dump a mute and move on, have an nice life man.

@anon79053375 easy there, there’s no need to get worked up over it. @anon34810869 admindev is correct, the windows section of the forum is to help users with windows related questions. Suggesting to switch to Linux because of a Cortana issue seems unnecessary.

It was working again. After a reboot Cortana is gone again and the search bar is locked up. Luckily I’ve learned from all the times I’ve bricked Windows and I keep my large files on a separate drive. Think I’ll bite the bullet this time and reinstall.

There is a system image option that I’ve used in the past. You can install Windows 10, install all of your applications, update the system, and the create a system image to restore to. Just keep a diff backup and apply the changes if you ever need to restore.

Just do a reset and install shutup10 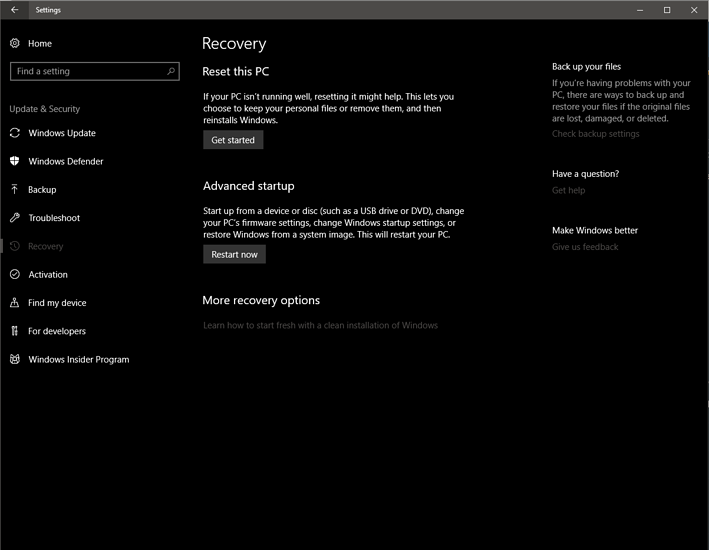 Also you dont need the windows search with open shell. I prefer it to the w10 start menu anyway.

Reborn of Classic Shell. Contribute to Open-Shell/Open-Shell-Menu development by creating an account on GitHub.

Another vote for Shutup10 here too, it works well for the most part and prompts you to create a restore point before enabling - just in case.