Just an observation of internal network cable, used outside for 3 years

Not sure how interesting this is.

I was pushed to use internal cable, outside for a few years until now. It just connected to a cheap AP and allowed me to have a connection outside the house when I was working and doing stuff. Worked out very well, I would have used external stuff, but money was a bit of an issue (when isn’t it!).

Anyway, within the last month it was more important that it was reliable, so I shelled out for 1000 ft reel, knowing I’ll use it for quite a few bits. The basic run is around 150-200ft, once it was in place, I started stripping out the old internal cable. Here it is - quite interesting that it carried on working, even though the outer sheath is incredibly brittle. Mildly bending it, caused it to fracture straight away - though the internal cables appeared unaffected…of course probably not for long! 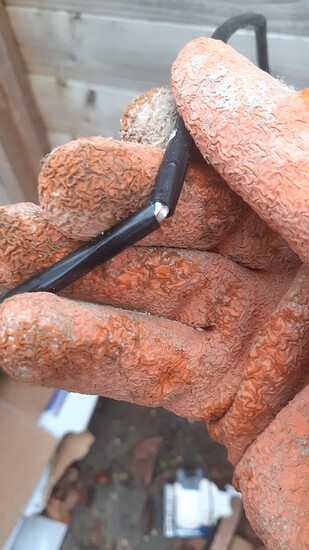 Anyway, there you go!

I’ve had some cat 5 stuff that goes outside for a 15 ft run.
Garden variety , it’s been 10 years at least.
I was checking it the other day as I was running another 20ft run.
Still pretty good shape. It’s white, don’t know if that makes any difference.
Not plenum either.

Maybe white coated wires could potentially protect it slightly a bit longer, because intuitively, it could reflect the light more and prevent solar energy from degrading the plastic cover of the wires.

Im curious now if black vs blue wires would last longer in the sun, my hypothesis is, the blue one will last slightly longer on average.

That’s just what I was thinking when @markwoll mentioned his experience.

My experience was with a length of around 90 feet - I think that the most degraded cable was the lengths that were in direct sunlight.

I was hoping to get the fully shielded cable, but it was just too expensive in the end, so I went for UTP (I think that’s what it was called).

Garden hose is also a quick and dirty method of protecting outside cables but idk, proper conduit might be cheaper depending on length

Janky but effective. You can probably comfortably fit 3 in a regular garden hose but you have to do the cable termination after inserting the cables inside the hose. You might get to fit 4 cables but bending it might be problematic.

That’s a pretty damn good life hack, I like that, especially if there’s old hose that was planned for disposal

able termination after inserting the cables inside the hose. You might get to fit 4 cables but bending it might be problematic.

That’s very true, if it were just one cable I’d attach some light packing to the cable end and attach a vacuum cleaner to the other end to suck it through. Not a job I’d look forward to!

You know what, maybe two would be a better maximum, I just realized if you needed to pull out one cable, its going to be extremely difficult with three and pretty much probably impossible with four.

Im curious now if black vs blue wires would last longer in the sun, my hypothesis is, the blue one will last slightly longer on average.

It would depend upon if the cable was outdoor vs indoor rated, some companies use a gel between the inner and outer cable on outdoor rated cables and some indoor cables put shielding between the inner and outer cable cover. I’ve ran indoor cables outside a few times, never seen any UV difference between black, blue or beige but the cables were shielded so they had two layers of protection. In the past I’ve had indoor non-shielded ethernet cables have crumbling/peeling after 5-6yrs.

Connecting computers in garage to the internet