I was also going to suggest this. It should push 4k without issues ? for non-gaming use, unless you have any special requirements, you don’t need much to power a 4k monitor for day to day work.

That wouldnt be a bad way to go. The 580 is somewhat sanely priced new.

If gaming isn’t a factor then it literally doesn’t matter as long as it drives the number of displays you want.

And again, compute is super spotty for OCL on amdgpu right now so it’s not as if that extra horsepower can be properly utilized for productivity

Here’s one on Amazon for under MSRP! (after rebate) 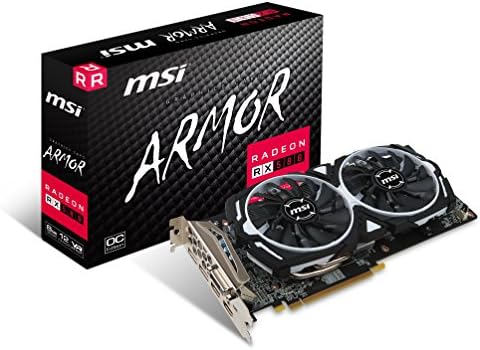 Experience the next level of immersion with the world of VR gaming and entertainment with MSI RX 580 ARMOR 8G OC powered by the revolutionary Polaris architecture. Puts an end to choppy gameplay and b ...

I assume he’s doing some gaming because he was talking about freesync. Otherwise I would have recommended a GTX1030 or RX-560.

I was looking at the saphire nitro as I’ve heard nothing but good about them.

if you can find a 4xx at a discount or used, that’s also an option.

Sapphire is another $30, if you really prefer the brand go for it.

I would be wary buying a used 480/580 as it was most likely used for coin mining.

Since it’s a dual boot would the gaming be done in windows @haptizum?

Yeah i was looking up the prices. If you can get it significantly cheaper sure, if you were looking for a new card it doesn’t seem worth it.

not exactly relevant but the nitro + is reset bug-free

@Adubs, yes for the major titles I play, but if it runs on Linux I would rather play on Linux.

it’s just a refresh, so support window will likely be the same. If you’re just driving displays IDK if it’d matter much.

yes for the major titles I play, but if it runs on Linux I would rather play on Linux.

You said you weren’t gaming much anymore.

best performance and game compatibility on linux is still squarely with nvidia per dollar if you do plan on linux gaming.

Indeed, but at the lower-end adaptive refresh makes a really big difference and he already has a freesync monitor.

Agreed with this. Unless you want to use AMD specifically for the open drivers etc., if you dont care about that and plan to game, go ubuntu + nvidia or similar and get the card required for the games you play.

@Eden, I am not just one or two games a year and a lot of HL2 Deathmatch, lol.

is adaptive refresh even functional or implemented on linux games/amdgpu?

Not yet. (unless pro divers on ubuntu/centos/rhel)