I don't know what this old xeon chip is. Can anyone help?

I got some of these out of a box I found and I can’t find anything online about them. All I know is that it’s old. 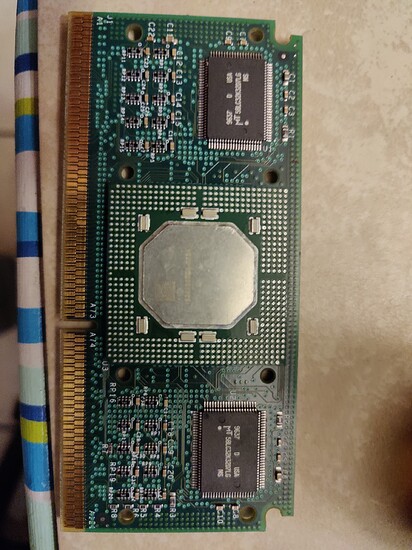 I believe this is a first a generation Celeron, not a Xeon.

Yeah looks like a pentium II era slot one CPU.

Never had one of those, went straight from pentium 1 to amd k6, but they were a quirky form factor.

Are you looking for a motherboard for it?

It appears to be for slot 1 which could be intel celeron, pentium 2, or 3.

IIRC Xeons did come on cards at one point….like that but they’re slot 2 and look different.

Been a while, but the Slot 2 Pentium II/III-Xeons were a lot taller form factor than what you have… they were about twice the size of a Slot 1 Pentium/Celeron to make room for the cache being in a much bigger package on the board.

That right there looks like a typical first-gen Klamath Pentium II. Slot 1, released in the middle of 1996, so 25 years old and somewhere between 266-450 Mhz.

I don’t think it’s a Covington or Mendocino Celeron because of the onboard cache (the Celerons didn’t have an L2 cache), and I’m pretty sure the later Deschutes Pentium IIs used a smaller brown FCBGA package without the IHS.

All I know is that it’s old

Definitely a slot 1 product, slot 2 had two notches in the PCB contact part. It could be a Celeron or a Pentium II/III with the case ripped apart, if you made a macro shot of the CPU package itself or just flipped the board the other way, it was usually specified in one of the corners or sides what CPU speed, multiplier and bus speed was required to configure jumpers for that particular slot1 CPU, right there: 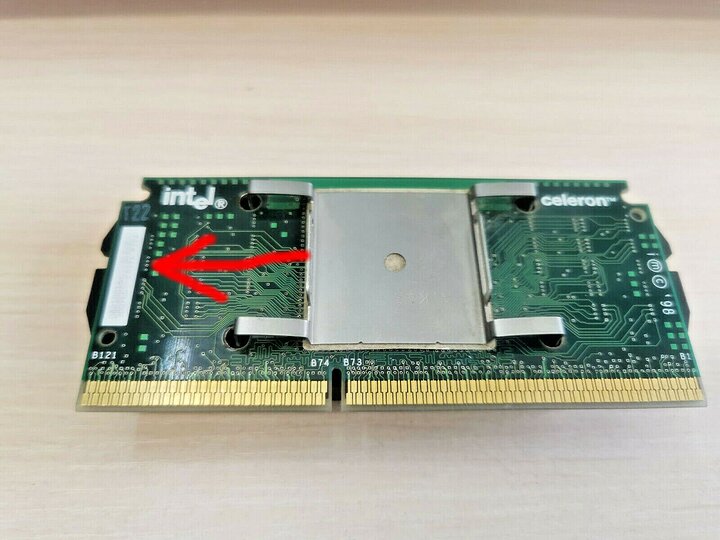 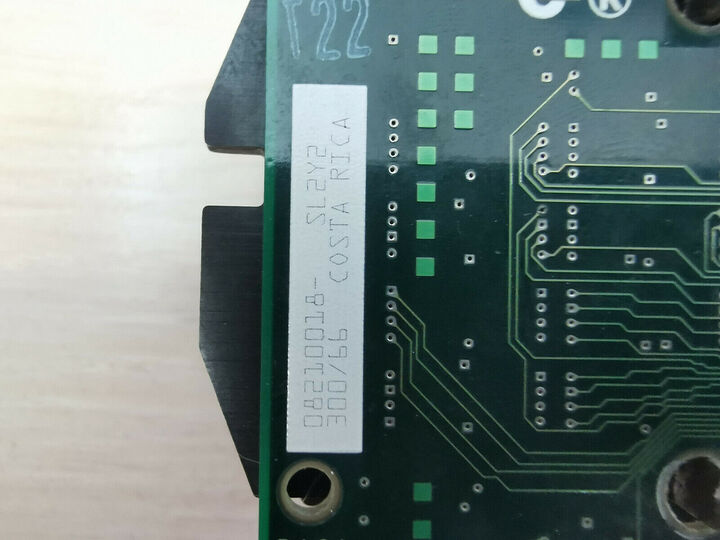 Thanks for the help so far everyone. The person I got them from, got them from an Intel auction. He has 300 of them. He tried putting them in slot 1 boards and they were killing the boards. They may be engineering samples. I got a box of them and I’ll post more photos. I’m trying to find a board that works if I can. Technical curiosity. 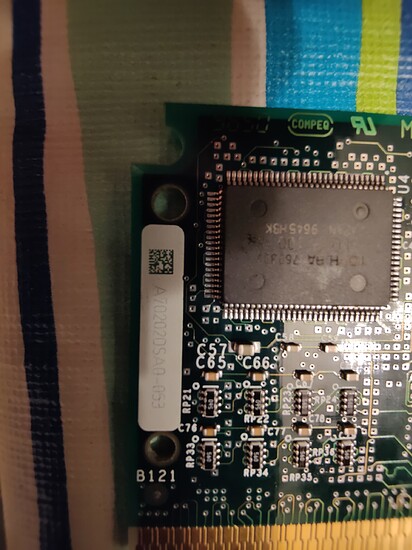 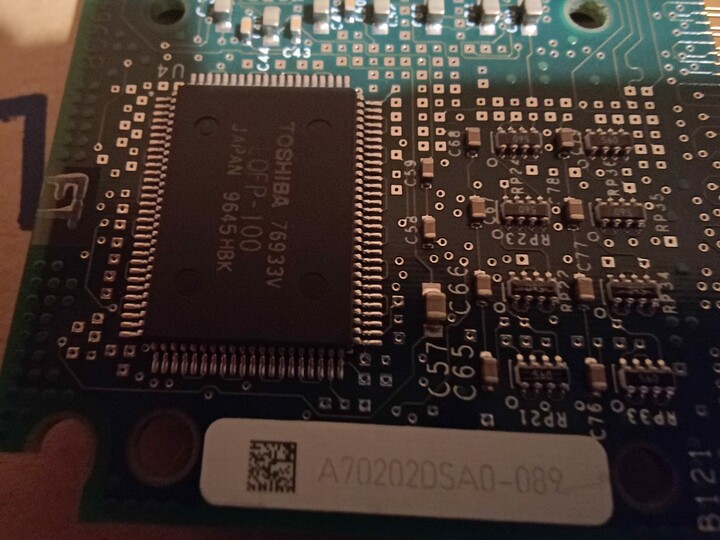 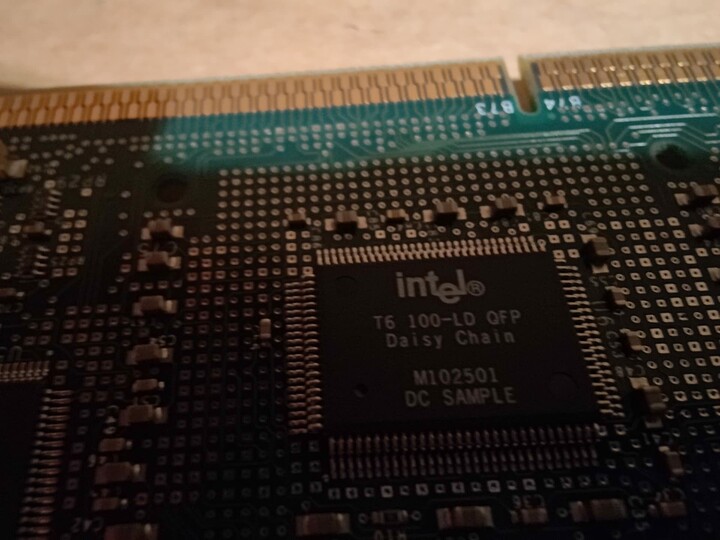 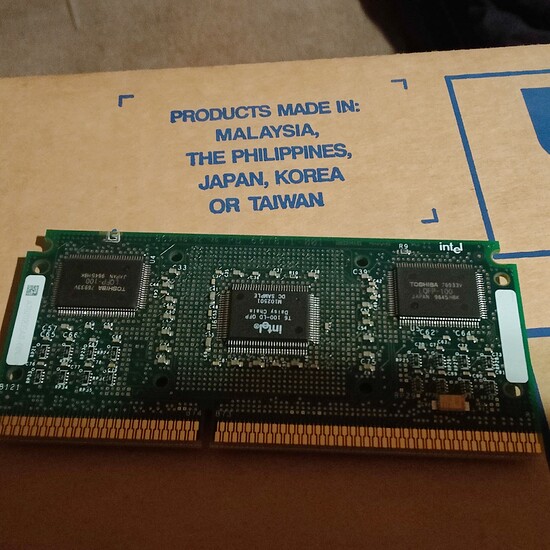 Yeah I’m looking for a board for one of them. Just wanna test thing out. Not sure what to do with the rest of the box. If anyone wants them just let me know. They’re new and never used. Just don’t know what board to put them in without killing them.

The other white label? Nothing written on it? Also, can you make a macro closeup of the CPU itself on the A side? That daisychain chip really confuses me. none of my Slot1 CPU’s have it there. There were also dual slot 1 motherboards but from what I can barely remember it did not take special edition slot1 CPU to run two at the same time. Maybe I am wrong about that, maybe there is a difference between Dual Slot 1 CPU’s and single slot 1 CPU’s

Get me the code on them and I’ll take them off your hands maybe if you can’t find a use.

Otherwise wanna buy an asus P3B-F? Allows overclocking and mine supports every slocket 1 and socket 1 setup. 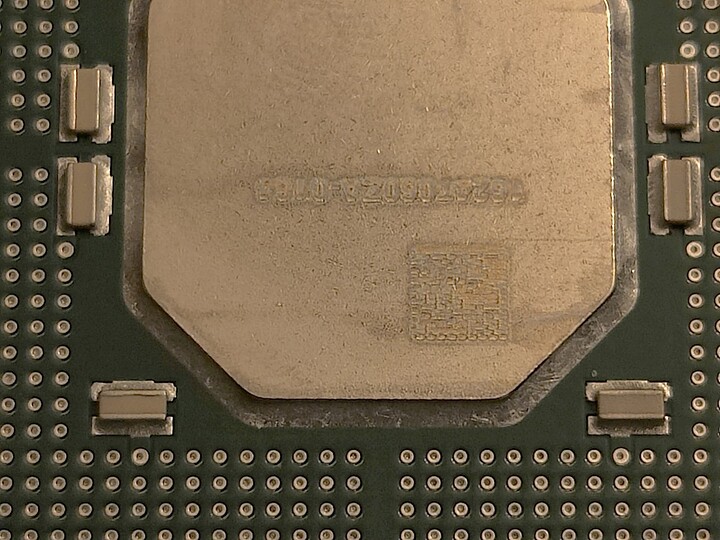 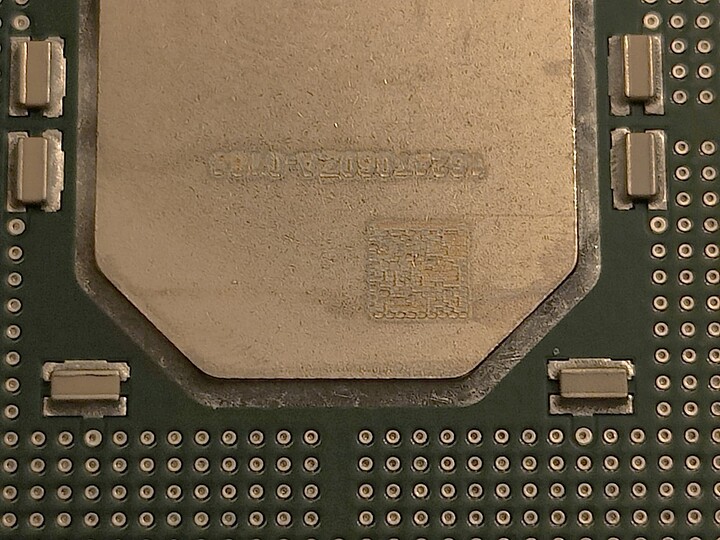 I don’t have a model yet. The stickers don’t have the usual markings. Once I figure it out I’ll let you know if I want that board. Hate to kill a good Asus board. The guys got 300 of them in Intel boxes, in antistatic bags. How many you want? 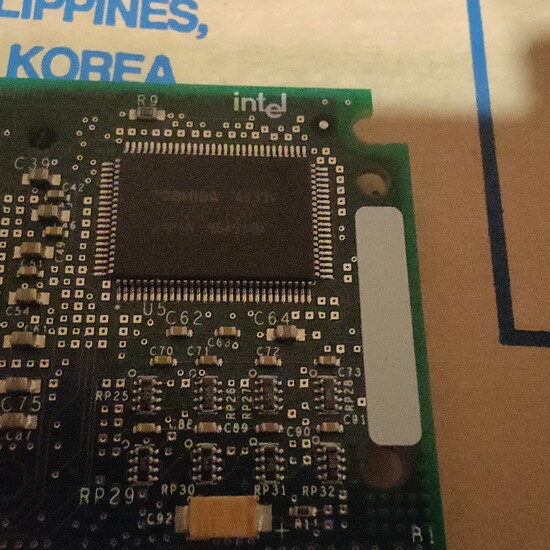 Alright, that’s absolutely a first generation Klamath-architecture Pentium II of some speed. The center IC on the back is the cache tag SRAM, the outer two are the L2 cache line SRAMs. It’s strange that you don’t have any kind of stepping/S-Spec marking (SLxxx/etc) anywhere on that thing.

I have a couple SL2HA Pentium II-300s in my drawer I’m looking at right now and everything lines up, except for the lack of markings which is the one thing I find suspicious here, along with the markings on that cache tag SRAM - it looks a lot like an early engineering sample, given “SAMPLE” and the way it calls out the “100 QFP” package on there which I’ve seen before in these sorts of things.

Considering the markings and lack of heatsink/module assemblies (assuming they’re all just the bare CCA?), I’m guessing you’ve got a box of pre-production engineering samples. Seems like a lot of them for that to be the case though, so I’m still not really sure, and I can’t believe an old ES processor would outright blow a motherboard unless those tantalum capacitors are just shorted from age or something.

I believe that might be a pentium pro smp server cpu
The daisy chain chips were used in early intel pentium2 multi processor server systems.

That would explain why it kills regular slot 1 boards. I didn’t know those even existed.

Do you know of a board they could go in?

None that I know of today.
I haven’t seen that server type for 15 years at least

@gregman171 Maybe a stupid question, but when trying these out, did you not attach any heatsink or similar? I believe most pentium2-era chips were running hot enough to fry if started without a heatsink. It does not readily explain the damage to the motherboard, though.

There were also dual slot 1 motherboards but from what I can barely remember it did not take special edition slot1 CPU to run two at the same time. Maybe I am wrong about that, maybe there is a difference between Dual Slot 1 CPU’s and single slot 1 CPU’s

You are not wrong afaik, I had a dual-slot1 system with two 350MHz Pentium II Deschutes CPUs, and my CPUs were the same as sold for single-slot systems. Unless Klamath was different in that respect. I bought the first CPU from the store, and the second one later from a friend who upgraded his single-slot system. I don’t remember the exact SL2** steppings, more than that they were different on my two CPUs. Motherboard was a Gigabyte GA-6BXDS that eventually got maxed out at 1Gb of RAM. Incredible machine, that was my main desktop/workstation for ~10 years before retiring it in 2008.

I believe that might be a pentium pro smp server cpu
The daisy chain chips were used in early intel pentium2 multi processor server systems.

Are you saying that the Pentium Pro existed in a native Slot1 format? I ask because the Wikipedia pages for Slot 1 as well as Pentium Pro mentions Slot 1 risers for Pentium Pro (“slotkets”), but not native packages.