How to maintain Manjaro as a main desktop

I’ve used Manjaro and Artix Linux for rolling distros. I wanted to know how do you recommend me maintaining a fresh install of Manjaro, so I can use it as a main distro for my VM’s and pretty much everything I do. I’ve been using the Arch Wiki to trouble shoot any issues I’ve come across but I wonder if theres any websites or tools you recommend that help me track updates that might crash any software on my system.

Any tips are helpful.

Do you have any specific things breaking?

Also I would like to recommend joining the Manjaro forums. They have their own discourse forum. You can be sure if any problems arise, people will complain there. Also some fixes.

Overall, I havent really experience things breaking over on Manjaro. I just make sure that when updates come, I stop all Steam games and limit myself to just using the browser. After the updates, I immediately reboot the computer even if it doesnt tell me to. This is a mindset from other distribution actually, but this has so far kept Manjaro well for me.

I have never encountered a rolling release distro which wasn’t a high maintenance affair. Rolling distros live on the cutting edge and may at any update break for any reason. There is no such thing as a reliable rolling distro, this is the price you pay for keeping everything up to date.

That said most rolling distros have a more stable track like, for instance, Debian and their Testing branch. I am not familiar enough with the Arch family to know if something similar exist there. My advice is, try to stick to the more stable tracks, those tend to be more thoroughly tested and less prone to breakage - though it still happens sometimes.

Sure, the more stable branches will be a couple of months behind on packages, except for security patches. But for 99% of the packages there is little difference and the times when there is a significant functional difference between two minor versions (like Linux 5.6 and 5.7) for your specific usecase are few and far between.

I daily drive Manjaro as my main gaming/personal PC.

while I dont mind some people dont like that because its rolling updates it can be bandwidth heavy. Its not uncommon to have one or two 2g downloads a month.

That said, its been running great overall for me.

I do have a few little bugs I have not sorted out with Plasmashell and Balloonrunner eating up all my system ram when I play Cities Skylines. But afaik its isolated to that game.

Just sucks when after a few hours of use I start to run low on memory because they are eating up 20+gb of RAM.

I have never encountered a rolling release distro which wasn’t a high maintenance affair.

You must never have use Arch based distros then. yay -Syu once a week isn’t what I’d consider “high maintenance”

IIRC, this install is… 3.5 years old now? And it survived a migration from my threadripper system.

That said most rolling distros have a more stable track

Arch has testing and stable. Stable is stable.

You must never have use Arch based distros then. yay -Syu once a week isn’t what I’d consider “high maintenance”

I had a friend running Arch. We were about to hold a presentation for a school project. 10 minutes before that his automatic updates script kicked in with that exact command. Arch Stable.

It broke his VGA output port due to a recent kernel or mesa change, which meant we had to spend 30 minutes getting the damn monitor to work properly. Granted, my friends fault here for running automated updates on a production system, but still.

So yes, even Arch Stable breaks from time to time.

That was some helluva teachable moment there.

He should have used Debian Unstable. The SID branch is pretty damn stable
/s

Speaking of which, I also remember a Debian Testing incident in the summer of… 2014 I think? One of my co-workers called me during vacation to inform me the test systems suddenly stopped working. We were working with PHP at the time, and right then Testing decided to do some upgrades to how PHP was structured.

Apparently they decided to take those particular weeks to switch from putting php conf files in /etc/php to /etc/php5 or something like that. So the system was broken for two to three weeks while plumbing was done. Awesome stuff

These failures have given me the opinion that there is no such thing as a stable rolling Stable. But hey, if shit breaking sometimes is the only price to pay for a fresh system, then it’s not a bad price to pay.

Speaking of which, I also remember a Debian Testing incident in the summer of… 2014 I think?

Ah yes. But were you there for the Great Schism of 2004-2006 that birthed Ubuntu proper. My friend converted me to ArchLinux because of that. I eventually went back to Debian as my main, but yeah. Also it was College. Everyone experiments, right?

Oh and the Debian libav incident.

Yeah, run an actual stable version of an OS if you need stability. Even then, pay attention to what you are updating.

Yeah, run an actual stable version of an OS if you need stability

This is why I was floored when CentOS kicked the bucket, it’s my go-to OS for rock solid VMs for things like my unifi controller, Plex etc.

BTW I run Ubuntu. (I’m going to make that a thing)

Ah yes. But were you there for the Great Schism of 2004-2006 that birthed Ubuntu proper. My friend converted me to ArchLinux because of that.

Been running Linux since 2002 and I cut my Linux teeth on Debian 3.0. I do remember when Ubuntu came, I was like “Wait it’s Debian only doesn’t suck???” - been running it ever since, except for when I worked at a startup a couple of years where we ran Debian Testing. Back then friends were trying to convert me to Gentoo rather than Arch. Arch became really popular in my circles around 2008-2009 ish.

Ubuntu has always been reasonable to me, but then I have never had exceptional needs, either.

Awesome to have like minded people. I started on Free BSD in 98. Switched to Debian Hamm in 99 and have been a 100% full time GNU/Linux user since 2001 I look forward to your war stories in the future.

It broke his VGA output port

How long ago was this?

I have been running Manjaro as my main desktop for over two years now. I like it so much I installed it on my laptop as well and use a Windows VM when needed for work.

It has been a pretty outstanding experience. The Arch wiki is great and the Manjaro forum is also very helpful.

I have rarely had a big issue that couldn’t be fixed by choosing an older kernel in grub (if I need a quick fix) or forcing a DKMS module to build for a new kernel. I have rarely ever gotten something working and then it just break. I have spent some hours before getting new feature / programs / weird VM setups to work.

How long ago was this?

Around five years ago, give or take. I don’t remember specifics, could’ve been HDMI or so - just that we had trouble presenting on his laptop and he fixed it by reconfiguring a file somewhere, and the reason was because of a config file layout change (e.g. old config not valid anymore).

I think it was a kernel config, could have been Mesa or Xorg too. All I remember was I wasn’t particularly happy with his Arch setup that particular day…

Nothing wrong with rolling releases, just expect to be doing some repair work every once in a while.

Around five years ago, give or take.

Oh, yeah. It’s improved leaps and bounds since then.

I’ve got a few arch installs that have been going for 3ish years now, and the only issues I’ve had were entirely self-inflicted.

I’ve got a few arch installs that have been going for 3ish years now, and the only issues I’ve had were entirely self-inflicted

I have my favorite one

When you were reinstalling and you formatted your windows disk. I’m never going to let you live that down even if it was a minor fuck up. The funniest part about it was that brief moment where you just didn’t want to accept that it happened

In response to the OP it’s perfectly good stuff I like Arch Linux a lot I used Manjaro but I inevitably moved my server to Arch.

I run Manjaro on three systems. I usually get one large update per week. Sometimes a minor update to a single program will come in during the week.

There was a time when an update would come in that updated the kernel but not the mesa package, or vice versa. This caused problems. But for the last few years, it seems the team holds back updates until all the necessary parts are in before releasing them, so no more breakage. Right now, the only thing that causes my Manjaro systems to break is me.

If you make changes outside of updates, take notes. I don’t, and then when I have to undo something I did that broke my system I forget what I did, so I flail around until I fix it or give up and reinstall everything. Don’t be like me.

When you were reinstalling and you formatted your windows disk. I’m never going to let you live that down even if it was a minor fuck up. The funniest part about it was that brief moment where you just didn’t want to accept that it happened

It was 1am and I was drunk. 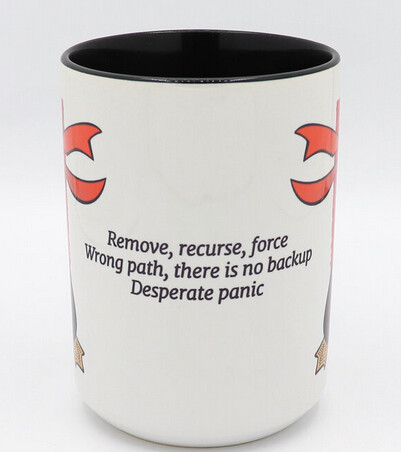