Help me make the decision

I am in a bit of a tricky spot and need some sound advice.

Tomorrow/Tuesday I will be building my own new gaming rig/VM box. I am working for a virtualization company and will be working with VMWare (hence the 8 core AMD) and game in my casual time. I have a $1500 AUD budget to build a tower (I already have a 2MS 24" display, keyboard and mouse/pad/headset).

The question I put to you is, I was set on a new build, the parts list of this is below. However I have checked the second hand market and found something else, which I could also get for the same money and which kills my new build in performance, yet it has no warranty as it's second hand. The seller has lost his original receipts. Do I risk buying the second hand rig if I benchmark it and check event logs prior to paying? Or considering I am gaming in 1080p should I stick to my new build list which has warranty?

I wouldn't pick either of those. But the second build is really bad.

So the $1600-biuld: the PSU is not enough for two 290x AND a 220W cpu. The 4x4GB ram will be slower than 2x8GB configuration. And the motherboard is the most expensive one one the market for AMD.

As for $1577-build, it is not as bad, but it still has some issues: Kingston RAM is known for heat issues (I assume that you will be doing at least some overclocking since it's AMD). And if that was my build, I would go with Sapphire's video card (the 8GB version). Also, please note that your build does nor come with additional fans. And .. emm .. when was the last time you used a CD/DVD?

Thanks for the reply.

Yeah the more I look at the second hand build, the more I am not a fan.

As for my build the T28 has 2x120mm intake 1x120mm exhaust fans, all led and flow around 65cfm so they're very decent fans. As for the graphics card, in my current mark, the Gigabyte 290X is on special in my local store for $440 AUD where all the other models are still $500+ and mostly out of stock.

I don't overclock my RAM, never have, set it as 1866Mhz and be done with with it IMO, the CPU and GPU may get a small OC down the track however gaming at 1080p, it shouldn't need an OC for quiet some time...

The optical drive is not really a concern as for the $19 it costs me I would rather have the convenience of having it available if required, besides I do like to burn CD's for me car haha...

I don't overclock my RAM, never have, set it as 1866Mhz and be done with with it IMO, the CPU and GPU may get a small OC down the track however gaming at 1080p, it shouldn't need an OC for quiet some time...

Well , as you increase the bus frequency, the ram's frequency too will go up.
Also, overclocking is what you do when you get the box and not 12 month later =P

You don't buy an unlocked FX CPU to overclock the bus, I only ever tinker with multi's as I don't like over clocking my northbridge or RAM if I don't have to. I honestly wouldn't be overclocking either of those rigs for at least a couple of months...

The 4x4GB ram will be slower than 2x8GB configuration.

Not for gaming. I suggest you read:

Some links please. Haven't heard about this issue before.

As for the 1577$ build doesn't look bad, I'd also pick Sapphire for the GPU - that is if the price wasn't that different.

Overclocking the bus gives you more single-tread performance than multiplier.

The best is to increase bus and reduce the CPU, CPU-NB, HT and RAM multipliers low to get normal/preferd oc levels.

$1550 PCCG build > http://www.pccasegear.com/index.php?main_page=wish_lists&wlcId=425148&action=wish_lists
- an 8370 may be a nice option over the 8320 but it may push the cost too high as postage will be a fair bit- depending on where you are there are certain vendors to pick from - PLE, MSY, MWave, Centrecom etc.
Buying 2nd hand you always run the risk of something caking it after awhile and having no warranty. Only certain parts come with transferrable warrenties or cash reciepts for parts....

Thanks for the feedback.

I have updated the build and will post the new specs asap.

I need the rig to have a gold rated PSU and 16GB of RAM (virtualization reasons). Thanks anyway deejeta.

Any other opinions guys/gals?

Here is my take on the builds:
The FX 9590 comes with an AIO liquid cooler.
Mushkin makes some amazing RAM and it is an All American brand. Made in the USA.
Adata and Hitachi make great storage devices
The Antec PSU is the Exact model JonnyGuru was praising and getting a stiffy over.
The GPU has much better ratings than the TriX version.
The Sabertooth is a damn good board
The Case is a good damn case.
The total build came to something like $1 more than your first build.
PCPartPicker part list / Price breakdown by merchant

Thanks for the advice, I would rather buy from a local retailer though and I am fortunate enough to have some fairly well priced retailers/online warehouses within an hour of my house. I would also want to run at least 1866Mhz RAM with an FX system as per their default preferences/max frequency.

I have until tomorrow morning now to make my decision and to make matters worse the second hand PC seller has dropped his price to $1500 AUD for me.

I have until tomorrow morning now to make my decision and to make matters worse the second hand PC seller has dropped his price to $1500 AUD for me.

That is a bit harsh haha, on his fan controller it shows full system power draw and it apparently peaks at 680-720w but that is just the guys word... I see where you are coming from.

I have decided to go new and I am picking my parts up tomorrow, I already have a 24" ASUS 2ms monitor, Logitech MK710 kb/m and Razer Kraken 7.1 headset to finish the build.

There is no window or any fancy LEDs but the parts I have selected should go together well and leave me room for future upgrades (second 290x/some mechanical drives). The case should have good positive flow as well. 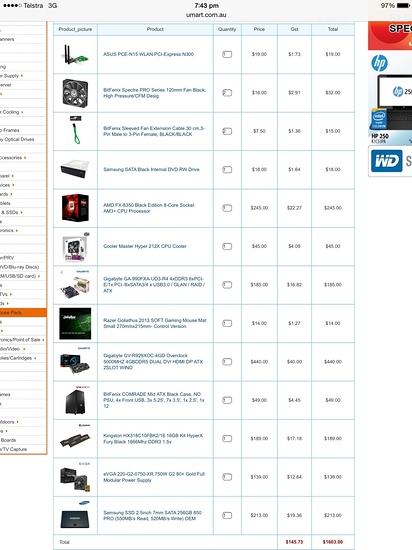 If you are only getting one 290x the 750w power supply will be enough if you want to add another one it will not be enough power. the cpu and 2 290x will take up roughly 700w maybe a little less.

don't forget you also need to factor in the fans, hard drives, ssd, ram, the little power the motherboard needs to run, cd/dvd drive, and anything else that runs on power.

what are the "local" retailers? Were you aware that you don't pay sales tax as long as the shipping facility is not in your state?

Local to Australia, where the OP is from.

Here is the best i could do what with your government price gouging the shit out of you guys.

All of my parts are from Umart, my build is slightly dearer but has a larger SSD, CPU Cooler and better power supply but lacks a mechanical drive, that's a trade off I am willing to make at the moment.