So I'm up to my 5th pair of headphones in as many years, and all of them are half way decent ones and still in working order. I'm just curious how many other people suffer from the same affliction.

From newest to oldest:

I really only use the newest 3 anymore, and I JUST got the M50x's, so I imagine the Pioneers are on the way out. Replacement earcups were insanely priced and took 3 weeks to ship, so I just decided to just get some new ones.

HD280s were too heavy, and hadn't seen use in so long I ended up letting my ex-wife have them. Then the MDR-7506s were from the days I thought I was going to be doing a lot of commentary and wanted a set that would help with voice work. They're still in a moving box and I've lived in this place for a year.

EDIT: Updated stuff that I sold, and new stuff that's replaced it.

I want to get some really good headphones but there is no way I'm paying more than like 50ish dollars. I'm also thinking about getting a quality mic but thats at the bottom of the "want" list.

Philips SHP9500 HiFi Headphones are pretty damn good and they are on sale for $77. I've got those and they are supper open and have great sound stage and accurate and detailed as well. Though you can usually find them for $60 around too if you want to wait. Or the Pioneer SE-A1000 would work well too. Or even the Superlux 668/661s.

I hope to be a headphone hoarder in the future. I do have the Superlux 668's. They are quite good for the money.

I would love to be a headphone hoarder some day.

I would love to try a pair of LCD's (pretty much any generation)
However, I think my next upgrade will need to be the dac/amp.

Wow those superlux's look super comfy. Do they breath well? My current over-ear headphones are on their way out. Even though I wipe them down with alcohol swabs after every use I got like jock itch or something behind my ears. Time to go to the beach!

I don't have a problem.

They would breath better with velour pads, but they aren't terrible. The one complaint I have is they fit more tightly than I would like. I imagine they will loosen up over time.

Very easy to mount an Antlion mic to, as well.

Just got me some oldies. 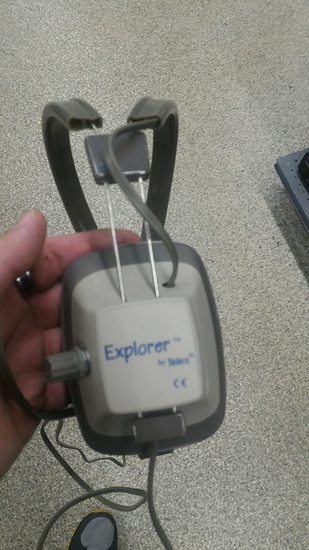 People should get a hearing test to make sure your ears are okay first. Since, it may not be the headphones that are the problem.

Who said I didn't like the way they sounded? I just like to have more pairs. I'm planning on picking up a pair of hifiman 400i just because I want a pair of open back planars.

Sony: evaluating spoken audio
Sennheiser: good but heavy.
Pioneer: bright but good
Rbh: in ears and awesome
AT: the over the ear version of the rbh with a bit more thump.
Hifiman: never tried PM headphones and want a pair.

I might have accidentally bought the Phillips SHP9500s. These are interesting.

I'm on the road a lot, so portability is the biggest factor for me. Right now, my main sets are the PSB M4U 2s (over-ear) and the Jaybird Bluebuds X (in-ear). As far as travel-friendly cans go, the M4U 2s offer superb sound quality. The built-in amp is great. The cordless Bluebuds are also nice for traveling light, or having to move around a lot.

At home, I have a pair of Astro A50s for my desktop. They were decent when I bought them, but you could probably do better for less now. Can anybody recommend a pair of top-quality wireless headphones? Maybe I'll just grab some Sonys or ATs. You can find barely-used sets for peanuts here in Japan.

your end game should be some HD600s or if you want to go full out break the bank LCD-2s.

Yeah, I think my end game are going to be the HE-400i's, from what I understand the sound signature is very similar to the HD600's but with better low end extension. Thtat's not a dig on the 600s, I actually really liked the 1 pair of 600s I tried, I just think I'd rather have the planar versions.

After that I might grab a pair of philips fidelio x2's (after trying the 9500's im now VERY curious), and then some variation on a pair of Fostex T50. That might be enough to satisfy me for a few years until something insane catches my eye. I'll probably just start spending that cash on DACs and Amps.

I started off with a pair of AKG K701s and a little dot mk3 tube amp.

Progressed onto Denon D7000s which were a lovely set of cans, so comfortable and nice sound signature but suited a solid state amp better so I got a Music Fidelity (model escapes me). Then used speakers more so sold them both.

Now I have a Mayflower/Tek Syndicate edition ODAC/O2 amp & FiiO F18 (for portable use) and Hi-Fi Man HE-560s and I'm very happy with the combo. I think I will be staying with these for some time, already upgraded the cable to a silver version but the OE cable is horrible for tangling.

Also have a pair of Beats Studio 2 wireless (I know lol), they are a pretty fun sounding set of cans for using out and the bluetooth connectivity is great. Just wish you could switch the noise cancelling off, in a quiet room you just hear the hiss at lower volumes but it does work well outside.

fair warning with planar, you need a beefy amp to power them.

I just love the 600s since they can be found for $250-$350, sound amazing and can be driven by anything (better results with a proper amp how ever) I can't really see any other headphone being an upgrade unless I shell out big bucks (my eye is on the LCD-2s but I'm not made of money + Canadian dollar is fucking shite right now)

I'm also affected by this disorder. ;) I need to sell my K553 as it's accumulating dust. From oldest to newest:

But now with my 3 Audio-Technicas I think I'm pretty much all set and I don't feel the need to look elsewhere for new headphones.

I'm right there with you on the open back thing. These SHP9500's are life altering (How I'd imagine the 900x's would be). I'd be using them right now if there wasn't a country concert right outside my window. Went to sleep wearing them last night, and woke up, picked a new genre, and kept listening to them for another 4 hours after waking up.

Can anybody recommend a pair of top-quality wireless headphones?

I remember Jayztwocents saying he loved his Sennheiser RS175s, but that's all I got.