On the just-posted YouTube, it was mentioned in passing that there was a variant of the MW340SP0 that came equipped with a 10GbE port. I’m unable to find anything like that at Gigabyte’s website…could you provide a little more info (e.g., SKU)? Thanks!

The SP0 suffix indicates that this MB is likely the faster network variant of the board, usually the higher numbers at the end of the gigabyte name indicate a slower network interface among the sku variants; at least that has been their naming scheme up until now.

Perhaps gigabyte will use the same PCB for the upcoming W780 version of the board to coincide with raptor lake, the hypothetical MW35-SP0.

Thanks for the quick reply. Wendell made it sound like the variant is in the wild right now…and I don’t think he was talking about using his M.2 hack to add 10GbE capability. Hoping he sees this post and will clarify.

They should be generally available soon. The close-up of the motherboard shows the outline and placement for onboard high speed.

It’s entirely likely Wendell knows more about gigabyte enterprise’s product stack than I. I’ll be interested in what they end up naming it, seems like they didn’t leave themselves room in the naming scheme for a faster variant.

Regarding the 10gbe m.2 cards:
They exist, here’s one sitting on my desk right now: 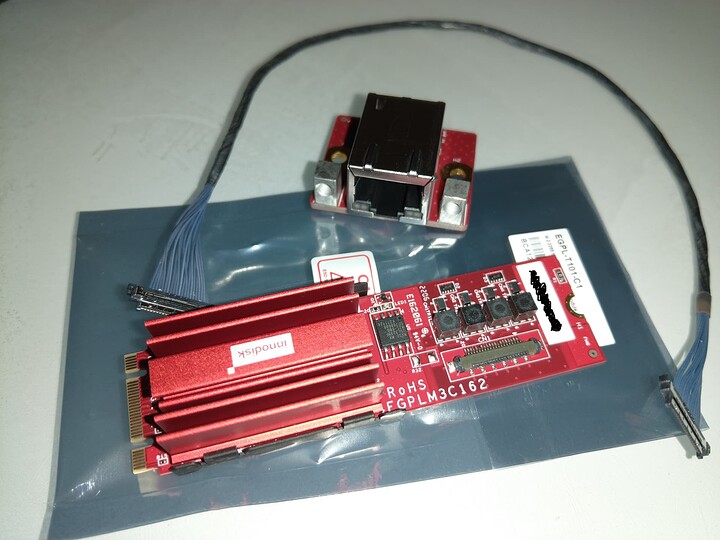 I’ll be interested in what they end up naming it, seems like they didn’t leave themselves room in the naming scheme for a faster variant.

I was kind of set on getting an IMB-X1314 board until I saw Wendell’s video, since I had given up hope of finding a GA Gigabyte W680 board. Now to mull things over…

Still no mentioning of availability and pricing so you probably might as well go for that one.

It’s interesting to compare the two. Most of the differences are minor, but notably, the ASR has 3 2.5GbE ports, but no IPMI, while the Gig that Wendell was showing has 2 2.5GbE ports and IPMI. The Gig variant with 10GbE (especially if it’s Intel and not Realtek) and IPMI would pretty much check all the boxes. I’m assuming if such a beast exists (or soon will) that Wendell would be limited by an NDA as to what he can say publicly.

Is that why no place has this sku?

This board with an onboard dual 10GbE NIC plus an i9-13900… Calgon, take me away! Let me pin all my stupid little VMs to E-cores.

even though this motherboard is classified as a Workstation motherboard. It has Characteristics for a great little Server. I agree. YOu would not need much for cpu horsepower for a little server that does File Sharing, rsync, Printing, ftp, nfs, ssh, xrdp, and so on.

Yeah been rocking the cheap forbidden router (next video soon) and I am shocked how much faster this is than an older 4 core xeon 1240v5.

@wendell, how is it with TrueNAS Scale running several Docker containers (HA, Pi-hole, Zigbee MQTT, yadda yadda) in addition to core NAS duties? That’s my use case. Ideally will also work with an instance of Frigate w/Coral TPU(s), given an appropriate 12th gen Core processor.

@diizzy, thanks for the link. Priced way too high, IMHO, when the IMB-X1314 can be had for approximately $400. And the comparable Supermicro X13SAE-F is available for under $500. No way that Gig can be considered rationally valued at nearly twice the price of the ASRock, and IMO the Supermicro is likely to be the more reliable and better-supported board for much less than the Gig.

I guess unless common sense reasserts itself in the marketplace, it’ll be the ASRock for me, only because the Supermicro requires unobtanium DDR5 RAM.

Hi everyone, I have literally been sitting on my hands for this motherboard to come out since it was announced. And the first listing is for $800… I guess at this price tier I should just wait for intel to sort out the bug list on sapphire rapids.

I guess at this price tier I should just wait for intel to sort out the bug list on sapphire rapids.

Or wait and see if that initial price turns out to be just an outlier from the “I’m first!” merchandiser trying for a few sales with absurd markups before the market normalizes with several trustworthy sources in the channel carrying the board, e.g., NewEgg, Provantage, etc. Gigabyte is certainly a fine company, but the more I think about the deltas between SuperMicro’s WS/server boards and this one, the more I have to think there’s some mispricing going on.

To be honest with you I thought the $500 pricing on the Supermicro X13sae-f was just Newegg trying to make bank on early sales. With this board debuting so high, I think it will end up settling into $500 which is a real bummer.

It wouldn’t be unreasonable – a bargain, in some ways – if it settles around $450 for the 10GbE version…if that ever gets released. I’m not sure why anyone would purchase the current iteration of the board for $750+. If Gigabyte’s margin structure is driving that price, and they can’t reduce it without taking a loss, it may do a face plant in the market.

I got this board on Friday, so far haven’t been able to get all 8 SATA ports to detect HDD connections, only 4 show up. I see that the block diagram says there’s a switch between 4 SATA III ports and an M.2 port but I get this behaviour even with 0 M.2 drives connected. I thought the PCIE lane switching would be dynamic but it hasn’t seemed to have given any connectivity to the other 4 ports. I don’t see any way in the BIOS to manually switch the lanes over either. Anyone got any information or am I missing something?