Hello all, first post here on these forums. Really looking forward to being able to contribute to this awesome community.

I'm hoping you all can help me with my difficult decision. I'm building my first PC and like many others in this budget range, I'm torn between the strength per core of the G3258 and the quad core goodness of the 860k. Here are a few requirements for my build :

-Budget: $600 Range
-I live in the US and am not partial to any specific retailer
-I already have peripherals
-Computer will be used for casual gaming, I don't need crazy performance here but being able to play most games at 1080p high settings is sufficient. Besides for that it would be used for general web browsing and photo processing.
-I do not need an operating system, will be using strictly Linux Mint as I do now.
-I will definitely be overclocking these chips.
-I will be staying with the mATX form factor, love the idea of having a small case and that Air 240 is so sexy

Here are both of my builds on pcpartpicker:

For the 860k I was sure to find a mobo with heatsinked VRM's as I will be overclocking, so that is a must. Also that MSI board appears to be out of the box compatible with Kaveri from reviews I could find.

Pros of going Intel for me: Better per core performance from G3258 as well as the ability to jump up to a K series i5 or i7 in the future. Also performs better in all gaming benchmarks I could find than 860k.

Pros of Amd: Quad core performance (Huge pro) and also fulfills my affinity for AMD, I like rooting for the underdog.

You could make it more of a choice between an 860k and an i5 4460, but if you're stuck on those builds the 860k is a better choice overall since it's a quad core, and some games such as far cry 4 and GTA V just don't like dual cores

Also in either case get a 380 over the 950, it's only like 30 dollars more, I need to switch this one into my builds actually
https://pcpartpicker.com/part/xfx-video-card-r9380p2285

The 860k will end up bottlenecking the 390 to some degree, but you can always drop it and get an SSD, or just keep the 390 and run games at higher resolutions/settings

10 more bucks i'd put the 4590. Better performance.
Prices are a big off if you go to pcpartpicker.com 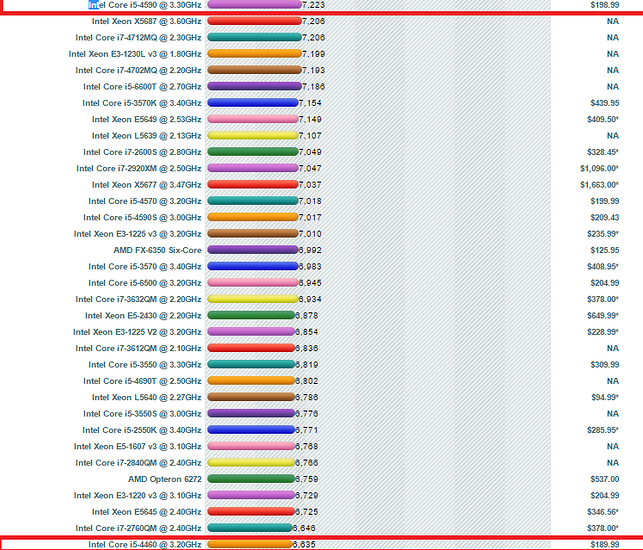 I am a huge fan of AMD but for Linux I would go with a Nvidea gpu.
At microcenter I got a 7850k with an MSI 68 board for 110, Best buy will price match some things but I have never tried them. I also have a 7870 with an 88 chipset MB from Gigabyte I built for my dau.
For 1080 gaming I would try to swing the 960 gpu.
Linux Mint is awesome! Most Linux games seem to be on steam. The best games for Linux on steam may run better on the g3258 then the 860k. CS GO is my fav and I believe it is single threaded so it may run faster on a G3258 then the 860k.
The g3258 sounds like your best bet to me. I would definatly go with a 960gpu even if it means holding off on watercooling for a few months. If your married you can always say" hey, the fan broke, and I wanted to make sure you can play can crush" then buy the water cooler:)
On my 7850k with the 68 board I don't overclock since the board is not rated for the 7870, just the 7850. I have a 300 gig partition on my HD waiting for Linux. I may go Lubunto with the lxle desktop. I am just putting it off cause I heard so much about getting catalyst to work with Linux. I HATE the sudo command! what can I say I am getting lazy in my old age. Hope they have catylyst in pkg manager soon. Ok I am rambling so best of luck and hope some of this helps.

I have put this together due to the fact that you have stated that you wanted high settings 1080P performance which is where the R9-380 is a solid performer. That is what this card was designed for. It will handle 1440 at medium settings depending on the game you play, But you have already stated you want 1080. I have chosen the 860k due to its price and all around performance. I used a single stick of Kingston hyper X 8 Gb because you will only have 2 slots for RAM. in the future you will likely want 16 and given the price of DDR3 there is no point in not doing so.
I also chose a 250GB Samsung EVO because the budget allowed for it and it is a great SSD
a 1 TB storage drive may be a bit small, but from what you indicate, you may not need it. anyway, you have a boot drive so if you need more space, you wont need to transfer OS like you would if you had saved money by only using a single 1TB drive. The XION case I picked is inexpensive, but appears to be a solid airflow case. You wont need a ton of airflow as the CPU in this system is not a huge hog like the FX 8 cores. (ask me how I know)
I elected for the corsair 500 CX because you should be able to upgrade a little with this PSU, dont worry about extra cables. The EVGA I have only has the MOBO wires and VGA wires as those that are permanent, the rest are plug in. All in all, I think this build will work quite well for your needs

As someone that has recently upgraded from a g3258 to an i5 4590, I'd go for the amd quad core if you don't plan on upgrading relatively quickly. The G3258 hardly plays GTA V, the game will stop rendering the ground if you drive a car quickly (what's the point of driving a car in GTA slowly hey?) I still played it for a couple of months (20-30 hours total) but had to spend most of my time in the desert so it would keep rendering. If you want to play modern AAA games I would only recommend the G3258 if you were getting a new CPU 4-5 months later (or even earlier). I haven't owned an 860k before so I'm not sure how much better that fairs with gta and other intensive games. I'm just talking from my experience so make sure you listen to all the other people with experience with the 860k.

Thanks everyone for the detailed replies.

In regards to just going with a locked i5, that's certainly a possibility. With the cost of a liquid cooler + OC capable mobo + CPU, that basically equals a cheap H81 mobo with locked i5. But the tinkerer in me doesn't find a locked CPU very attractive, and I would love to turn up the dial on the 860k.

Also, I agree that it would be wise to stay away from AMD GPU's since I plan on running linux. I think a GTX 960 would fit my needs well for 1080p gaming. From what I've heard the drivers for Linux from AMD are just not there, you all can correct me if I'm wrong.

I think my decision will probably come down to what mood I'm in the day I decide to pull the trigger on everything. I basically now have three close to identical builds between a locked i5, 860k and G3258. Currently the 860k is in the lead being quad core and overclockable.

Linux I would go with a Nvidea gpu.

I don't understand why unless your sole purpose is to game. You lose a lot of benefits. Linux is not fun to maintain with proprietary drivers.

Lots of Steam Machines are coming with AMD products. They will fix their drivers don't worry.

Without reading anything under the original post, here are my 1,7cents, since I'm poor people...
For me the choice is not Intel or amd, better per core or anything...
1. The choice for me here is simple... Dual core vs quad core... Not going to say anything else...
2. I would never go, nor advise anyone to go for MSI products on AMD based system. Not GPU nor motherboard. I personally, in my limited experience had to much issues with MSI products to be able to recommend it to anyone. My usual goto choice is Gigabyte, always, and so far I have never had bad experience with it, nor I had bad feedback... Recently I warmed up towards Asrock, and I am using one such motherboard, and I am Extreme6+ happy about it...
3. If you take 212Evo you may be able to get R9 380 and be done with it. You don't really need this shitty H60... Even with overclock...
4. Gold PSU is pointless waste of money for home pc... Those 1,25$ a year difference in power bills is laughable...
There we go...
Also I kind of disagree with Corsair air whatever case, but this is personal preference so I'm not going to hold it up against the build...

Pyscho, you make some good points, and I don't disagree with anything you said. And thanks for the input on MSI, I wasn't aware that AMD and MSI products did not play nice together. As far as the 212 Evo goes, those huge air coolers don't work with most mATX cases and it definitely doesn't work with the case I've selected. I also like the look of the all in one liquid coolers. Also again, thanks for the input on the PSU's, it's just hard to find a fully modular PSU that isn't 80+ gold and being fully modular is important to me, but maybe I can go with a semi instead and save some coin.

Zippy_Parmesian could you elaborate on your statement, what benefits would you lose going with nvidia GPU over AMD? Also wouldn't drivers be even more difficult to maintain for AMD on linux? Aren't a lot of these drivers poorly supported and/or third party drivers that don't utilize full potential of the hardware?

I would go for an i3 if you can fit it. it's much better than either of those options. I run a G3258 in my main rig, and frankly, it's just not powerful enough for AAA gaming. I would save up a little more and get an i3 or i5.

not powerful enough for AAA gaming.

I have my G3258 overclocked to 4.4Ghz with 8GB of RAM paired with a 7870. I tried playing the battlefront beta, and the stuttering was so bad, I couldn't even play it. GTAV is known to have issues with lower-end CPUs, Far Cry 4 won't even run on a G3258. The Witcher 3 also see massive framedrops with the G3258. not sure about the 860K. I wish I would've saved my money and went with an I3.

And keeping in mind i5 will eat up a third of the budget...


which is why I suggested saving up a bit more to compensate. ;)

Yeah, I was mainly referring to 860k being OK for gaming...

It may well be. I know that frame rates are about the same as with the G3258, but that it doesn't create as much stuttering. I still won't recommend to with anything more than an R9 270x or GTX 950 though.