Hi there i have built a pc in a NZXT Phantom full tower case with the following spec:
CPU: AMD FX-9590 4.7GHz 8-Core turbo 5.0GHz
Motherboard:Gigabyte GA-990FXA-UD3 ATX AM3+
GPU: Asus Geforce gtx 670
RAM: 12Gb
CPU Cooler: Corsair H55 57.0 CFM Liquid CPU Cooler
Hard drive: 2TB
Power Supply: Corsair CX750
I have a fan set to intake on front at bottom i have 2 fans on side panel at bottom on intake i have the top back fan set to intake for the liquid cooling radatior and 1 large fan at the top set as exhaust.
my cpu temp keeping going high to the highst being 66c and i dont like it i want to keep it from going that high.
any help would be great many thanks. i would add pics of inside case setup but dont know how to (if anyone does let me know and ill post pics to help) thanks 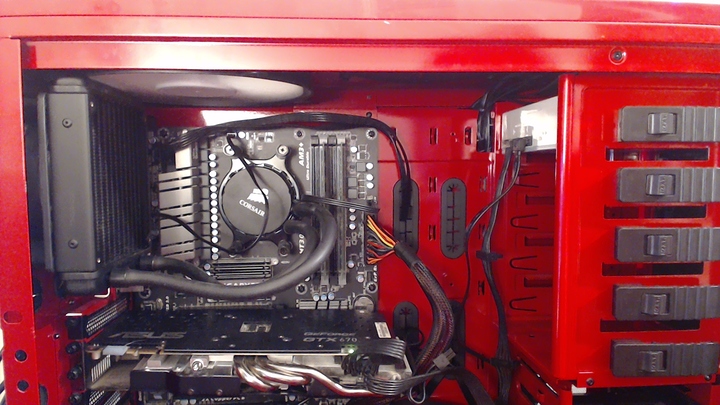 also my core clock speed when playing games spikes from 4751.22mhz drops to 1433.21mhz then goes back up and during the 2 seconds in spikes my games lag and lose fps??

Let's get the obvious outta the way:

Is the pump on the AIO running?

Maybe a thermal past issue?

Edit: I know these are trivial but I've had myself having a melt down thinking the worst when it was something simple like plugging in a fan header or something.

stupid question how would i tell if the pump is running i hear like a liquid noise when i turn pc on few a few seconds.

and the thermal paste i am getting some more and redoing it to make sure.

On my AIO cooler, I just put my fingers on it in order to check for (even the slightest) vibration. Or assuming your pump is plugged into a fan header, you may be able to check your UEFI to see if there's in RPM reading in there.

the pump is plugged into The PWR_FAN on the right of the board then adding another fan onto the radatior do i put it to intake air from the rad or exhaust to the rad??

Don't quote me on that, I'm not an expert on AiO units.

You can try putting a higher performance fan on there, but I think that just may help to mitigate the issue, not prevent it.

3 ways of doing this.

Take out the fan above the aio unit all that is doing is interfering with the air flow to the unit then get 2 fans on the aio in push pull but dont expect very good results on a small aio like that ideally you need a H100 or a noctua nh-d15 to tame a 5ghz chip.

i was looking at getting a Corsair H100i Gtx would that do the trick? ty

Yep that will do it

can anyone tell me the diffrence between a CORSAIR H100I AND THE H100I GTX?? ty

GTX is the newer model

which revision of that motherboard is this?
Also i dont think that the H55 aio, is decent enough to cool that FX9590

I use a CM Nepton 280mm on my 4770k. Like others have said, it may be too little cooling for that chip. I'm not all that familiar with AMD's line up these days.

well thanks for all your input guys im going to return my H55 and get the H110I and rearange my fans and hope it gets better :) ty ill be bk