Here I have for sale my Extreme Gaming Computer that I built 3 months ago. A bit of background on this build, I started ordering and collecting parts for it around July time. Components such as the graphics cards were not very well stocked in the UK in that time period as they had just launched, the memory modules had to imported from Germany as there were none in this colour in the UK either. Almost all of the fittings, res, pump top and accessories for the res had to be imported from the Netherlands! This build went way over budget as I originally thought I could source most of the parts within this country, but oh well it has been a great experience never the less. The system was completed around mid October and ran leak and stress tests for a few days straight. After that it wasn't used much as I went away for a month. So basically total usage till now has probably been between 2-3 months. Now enough chatter and onto the important stuff. 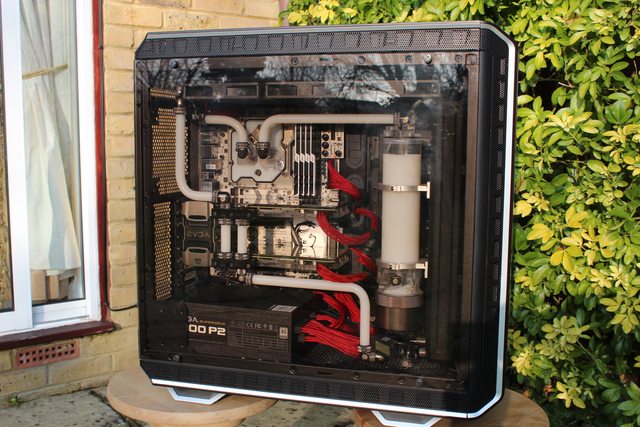 I built this system with silence and longevity in mind, not so much to break overclocking records or push my hardware to it's limits. That said I tried to see what I could get without sacrificing noise (aka higher fan speed). On the i7 I manage to get it stable at 4.6ghz with 1.36v. I played a few CPU intensive games and the overclock did show, but not enough to justify itself hence why it was put back down to stock (4.2ghz full time) and I dialed down the voltage to keep temps even lower. If left on default the motherboard will set it to "auto voltage" and that has caused temp spikes for no reason before so I really recommend anyone with a stock i7 to at least dial down their voltage to what it should be for the speed they run. As for the GPUs, with SLI disabled I can run with +220 on clock speed and +500 on memory, giving me around 2100-2140mhz in most games with temps being around 46-50C (that is with a rather warm room temperature!). When in SLI I dial down the clock to +200 and memory to +300 to keep it on the safe side as it can be more unstable.

So what do you get for your money?
You will receive this pre-built extremely powerful and very quiet gaming PC with a fresh install of a Genuine Windows 10 copy and the latest drivers already done for you. A lot of money was spent on this in order to build it with the highest quality parts I could find in Europe! It will be pre-overclocked to safe levels so you do not need to mess around with that and I will include all of the original packaging and manuals that I still have left from the purchase, most of it is sat intact in the garage. I will also help you get started and explain anything you are unsure about (components, how certain things work, how to safely overclock it even higher, how to adjust fan/pump speeds and so on). The system has RGB lighting inside which is controlled via a button at the front of the case. The case also has wireless charging for Android Phones as you can see on one of the pictures. The glass panel is tempered glass with a very slight tint.

The only problem I should mention is the little scratch at the top of the case which was caused by the delivery company. Thankfully since it does not affect the wireless charging module which sits under the plastic top, I have not been bothered to open a case and fight over it for a few months...

As far as payment goes I would prefer cash in hand or bank transfer once we have spoken about the sale. I am pretty sure most people who are serious enough to buy this, would ideally like to come and see it working first and collect it themselves. I am more than happy to drive up to 100 miles at my own expense to deliver the system and help you get started. I don't even want to think about what posting this system is going to cost once you factor in insurance and the fact that there are lot of fragile components inside! I will also find any other accessories I can include in the sale such as soft tubing and a funnel for draining and filling the loop, extra coolant I have spare, some extra hardline fittings I have laying about, spare o-rings and so on! The price is pretty solid, and in my eyes fair as this has cost me way over the £5500 mark to build as many of the parts had to be imported from all across Europe, and the system has not had much usage either!

I have many more pictures and am happy to provide any information you request. If you need to get in touch then PM me and we can arrange a call. Thank you for looking!

The rules for the selling items require you to show that you own the item being sold by providing physical evidence e.g. a piece of paper which includes your username and the current date in the photo of the item:

Photos of all of the items being offered, with physical evidence of your Level 1 Techs username and the current date of the time you started the sale are required for all sales. "Physical item" is as in a piece of paper or whatever you can find with your Level 1 Techs username and date written on it. If you do not follow this rule, you will be given 48 hours in advance to do so, otherwise your thread will be locked.

Could you please provide this evidence?

Oops my bad, all done now and edited the OP.

According to your profile you are a basic user and therefore cannot sell on here as per the WTS rules affirmed here:

From hence forth, only trust level 1 (or higher) members are permitted to sell items. Any member may buy.

Additionally, the thread is not marked by the [WTS] flag.

From what I understand he is a level 1 user as he is a basic user. Thus he should be able to sell his item as it says Level 1 or higher.

What do user trust levels do?

User trust levels are a way of... Sandboxing new users in your community so that they cannot accidentally (or intentionally!) hurt themselves, the forum, or other users while they are learning what to do. Granting experienced users more rights so...

There was also another thread that got locked because of this same "issue".

[image] This is a new, unopened H115i. I don't really have a need for it at the moment, so I'd rather sell it. I cannot return it to the store, otherwise I would just do that. This is a 280mm radiator with 2 140mm fans included. It has a 5 year warranty. It retails for $149.99 and the cost of shipping will likely be around $20 within the US, so consider that when making an offer. I was hoping to get $120 for it.

level 1 user as he is a basic user

Yes. According to @MisteryAngel in the thread I referenced, trust level1 equates to Basic User. Therefore I rescind my prior statement in relation to trust level, OP can indeed sell on these forums based on that.

However, This thread still needs to have the [WTS] tag as part of the title as per the B/S/T forum rules.

It has a For Sale tag instead, to make it easier you know?

But seriously stop worrying about what the thread does or doesn't have, it's not going to kill somebody! :)

Have a nice day