Ram: Corsair Vengence DDR3 2400Mhz 16gb (already have, so exclude this from the budget amount)

Keyboard: [not sure if I have extra money for a gaming keyboard, or at least the ones that are quiet when I tap on them, keys made out of rubber?]

Thank you for the help !

With a thousand dollar budget I'd suggest going with the 4690k rather than the 4790k (with a proper config you can stream 1080p with a 4690k). Then you can use the extra hundred bucks for something like a nice keyboard or a larger storage drive (HGST ftw).

The best way I've found to get cheap monitors is with a bit of hustle, find a friend who works for a company who is upgrading their monitors and grab a couple spares, it can be tough but it's not impossible, I have a slick 19" Hanns-G that I got that way, makes a great second monitor.

The SSD (corsair force has been fine for me) is for Windows and software and the HDD is for bulk storage like deejeta said.

You may also save a bit of cash by going with a micro-atx form factor. Here's a build I made up recently that might give you some ideas - http://pcpartpicker.com/p/qtvpnQ

currently around $1260 without monitors. will have to wait for sales

Ha... I just read the 'already have' on the RAM. I was taking the easy elim on that one. Too bad it was a good money saver going 1800Mhz.

If I were you I would do something like this if you have any questions and/or concerns feel free to ask.

Would he maybe be better off with an AMD 8350 8-core if he's wanting to do editing, multitasking, streaming -etc? 8350 is very close to the 4670k in gaming performance, so it should be pretty close to the 4690k as well -- but then he'd have the benefit of 8-cores where it might be useful. Plus that'd free up some budget to go in other areas since the AMD is cheaper.

I thought of that, but I can't find a good motherboard for it ;\ Z97 is competable with AMD 8core?

im stealing those rams from my mom's dekstop c;

Why not swap the 970 for a 290 and upgrade the CPU to an i7 if you plan on going the streaming/rendering route?

And if that 200gb is your only storage you're going to run out very quickly.

In addition you may want a desktop mic, the quality is presumably going to better with like a samson GOmic or a snowflake.

And are you not in the US? that total seems rather high for that hardware. Otherwise if a thousand is your total budget give me a bit, I be busy atm to make a parts list, though I need that country info.

I think that for some 1080p monitors that do the job you would need to spend ~100$ each, unless you get a really good deal for some second hand or massive discount

Im from the US, and I am still working on this, and some of the parts arent on sale, so I wont be buying those yet, thats why its that amount atm.

and here are some monitors i saw on ebay, are these good for the money?

Otherwise did you mean to get the witcher 3 with it? Because the 290 would probably be the better choice to buy otherwise, really you could easily get away with a 280 if you're only doing 1080p.

and if the monitor ain't IPS it ain't worth it.

Although for your secondary monitor it really doesn't matter what you go with, I'd just recommend getting a solid main monitor.

Anyways here's my suggestion for ya, total is just under a thousand 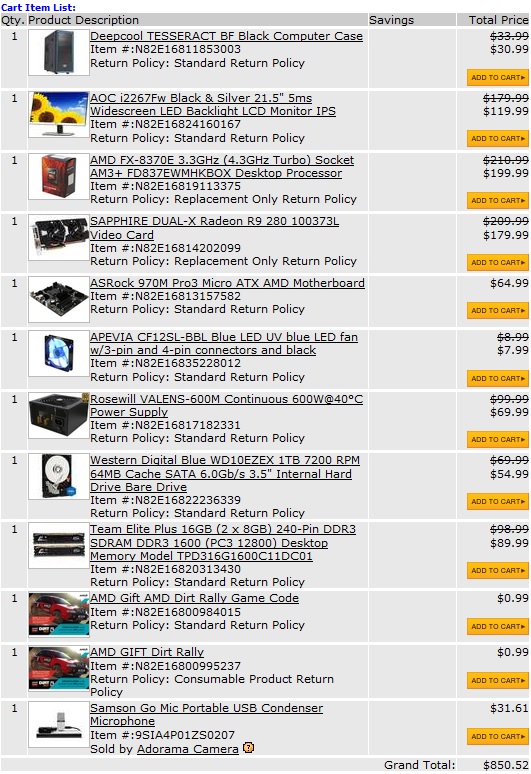 is the AOC one worth it?

That motherboard wouldn't work with that processor, and it's like never worth spending more money to get a 23" 1080p display, the one in my suggestion already has a thin bezel, just get the one monitor for now, and add a second later, or check your local craigslist for some free/cheap old 4:3 monitor to monitor your streams.

wait, does the AMD 8370 processor work with my Vengeance DDR3 8gb 2400mhz ram? on the bottom of the case, it says it supports intel core and i7

Any RAM will work with any motherboard/cpu, assuming it fits the slots.

Except for registered ECC, but that's a whole nother level.

I might be playing Witcher 3, since my friend got a free copy. and I will go for the
SAPPHIRE VAPOR-X R9 290 4GB GDDR5 TRI-X OC (UEFI)
does that work well with the ASRock 970m Pro3 Motherboard?

renewed my list, $1,167 now, pretty good, will buy the ones on sale now, and wait for the other ones be on sale later, maybe on July 4th or somethin'

i say invest in an 8350 if its cheaper and oc it. mine runs stable at 4.6ghz. i have an aio cooler, but those can be had for around 60 bucks these days. if you're looking at a keyboard, look up quickfire rapid i by CM. i bought the browns on sale for 85. you may hate the fancy pants fonts on the keyboard at first. but it does grow on you. and browns give you that satisfying click :)

another option is to get an 8320 and invest in one the upcoming amd cards. might mean lower prices on the lineup. moar can be had for less!

also dont skimp on mobo. see if you can pick up a sabertooth gen 2 rev3. its the one i use. it keeps my system running stable after oc. i have a 970 board that didnt do so great. had to rma, not pleasant.