Figuring out how to add space to fedora partition

Figuring out how to add space to fedora partition Linux

Got it working! Using this I reverted to a backup from my laptop using clonezilla pre change outputs [image] df -h df -h (base) Filesystem …

how do I take this free space and give it to partition 3? 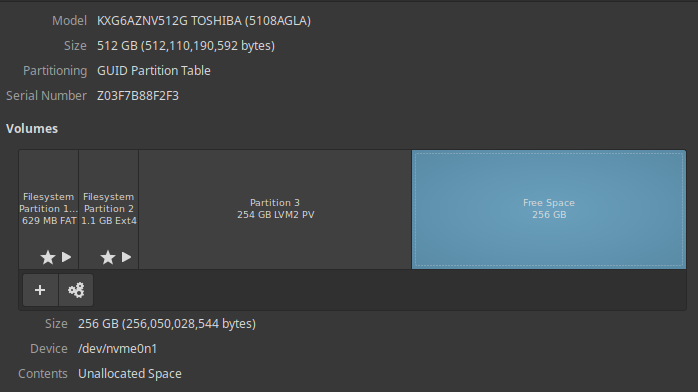 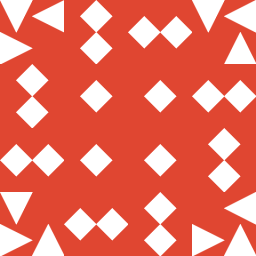 The thing that’s confusing me is

If you are in doubt, blivet-gui can give you a topology of your current partitions. So you can have a better visual representation or gparted if you like…

will likely only see one LV for home

and you have the initial df -h output…

but wheres the df -h output after the lvresize cmd you ran?

makes me think it resized the LV like you wanted.

did you get the free space added to partiion 3 like you wanted?
Im assuming so since your VG says theres 2 PVs in it.
im guessing you created another PV out of partition 4 and grew the VG with it…right

No, lsblk is just using partitions as the highest level of organisation rather than the LVs. The major:minor numbers of the LVs (device-mapper devices) on /dev/nvme0n1p4 are the same as those on /dev/nvme0n1p3 - same device and filesystem.

I hope you have a backup, because you might break your system. But it should be fine.

In your situation I have no idea what commands you have ran. Normally you would have to run vgextend on your volume group, using the nvme partition 4 as your new space to allocate. Ok, let me explain.

So, normally a disk would have a bare partition on it, like say formatting /dev/sda1 as ext4 or as ntfs. What LVM does is what its name implies: Logical Volumes. What are logical volumes? Well, in short, it allows you to have a whole file system reside on multiple physical disks, or in this case, multiple partitions, kinda like RAID0 (but not really). Well, LVM does more (like snapshots) but I won’t get into what it does.

LVM works this way: you have Physical Volumes (pv). a PV is a physical partition on a drive. Then, LVM has something called Volume Groups (vg). VGs can hold inside them multiple PVs, either multiple partitions from a single drive, or partitions from multiple drives, or a single partition, or any combination you want. Volume Groups define a “total amount of space” available. After that, you get into Logical Volumes (lv). Those are basically “partitions” on volume groups. I mean, partition, as in partitioning a volume into multiple smaller parts. You can have a single big LV spanning the entirety of a VG, or as is in your case, multiple LVs on a VG. Then, on top of the LV, you add a file system. That is, you format a specific LV with a certain FS, in this case it’s most likely ext4.

So, now that you hopefully understand how LVM works, let’s continue.

It is weird that you see nvme0n1p4 inside the LVM group in lsblk. I believe you already ran vgextend. I can see in your vgs output that you have 2 PVs, which can only be physical NVME partitions 3 and 4. So, from there, you should be able to just run

And be good to go. Unless you want to add some storage to root or swap too, which I show how in the above.

Note that in your lsblk output, swap still resides only on partition 3. I guess you have expanded your root and home partitions on the new partition.

Also worth explaining is that LVM is not exactly RAID0, i.e. it doesn’t balance data between 2 disks and you don’t need the same size disks (or partitions) to run LVM. But just like RAID0, if you lose a partition or disk that is part of a volume group, you lose the whole data on the volume group. You may be able to recover some portions of the data that still remained on the disks that still work, but it will be a royal PITA to get even that back.

If you didn’t have LVM and just had plain ext4 on your / and /home, you would have been able to use gparted (that you show in a screenshot) to expand the partitions directly (if they were unmounted, or if you were on a live USB environment). But LVM allows you to expand both your root and whatever other partition on-the-fly, avoiding down-time. But it’s also nifty if you want to have a single volume spanning on multiple disks without using RAID (due to same size requirement of RAID).

Got it working! Using this

You create a new partition using that space. I see that you already did /dev/nvme0n1p4, but it’s formatted as a Linux FS (probably ext4).

I reverted to a backup from my laptop using clonezilla

background I acquired a 500gb ssd during the summer and wanted to replace the 256gb (funny enough originally shipped with the laptop) that was currently in my desktop. The only issue was that I didn’t want to set up Fedora again. I had been procrastinating on competing this task as it was complex and I didn’t have a lot of free time. What finally… 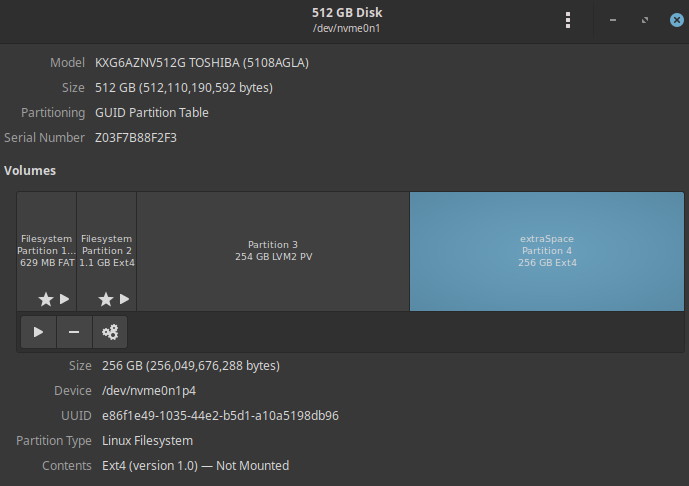 before running that would lead to a device not found 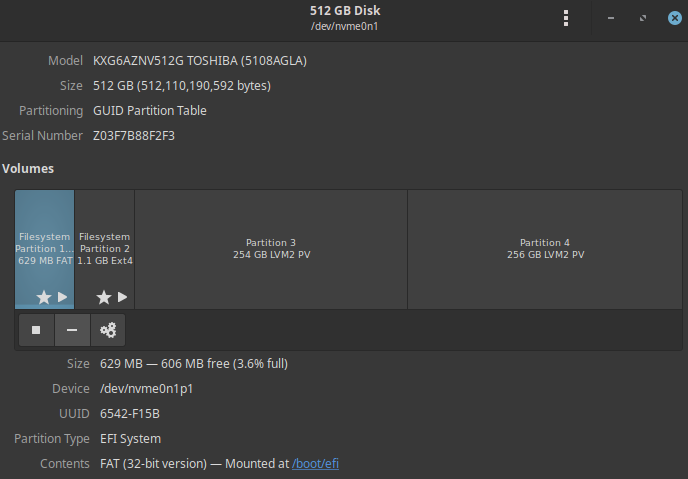