The hell is the point of getting bigger and bigger screens?

I hate this 16X9 trend that has been going on and taken over.I have mostly had 5:4 screens and getting that first 16:9 laptop was… Awful. It was really really bad. Not just the res, 1366X768 is suicide waiting to happen, but the whole idea of having no vertical space at all is just aggravating. Add to that that I use XFCE and Mate so that takes another 80 pixels of height or so away with top and bottom bars… The hell is this shit? Great now my shitty little thing has 680 pixels of height, minus the window bar minus the toolbars and all that bullshit and now you have somewhere around 430 400px. Thats fucking stupid.

“Well get a bigger res”

I don’t know if you’ve noticed, but getting a 1080p laptop for text editing is stupid. I already have pretty meh eyesight, its why I do everything at night so I don’t have to deal with problems like glare and shit, but when you get a bigger res you still have the whole crushed page problem but now the buttons are 2PX big! Or whatever. They’re stupid small. I hate it.

So let me show you what I mean by monitors being more and more retarded, right? I’ve always had multimonitor setups. As soon as I could plug one into a laptop and get it to split I’d have that going. So, go from two of these

Now I know what you’re thinking. “Thats fucking stupid I have that bleh” yeah ok. Sure. You have garbage. Congratulations. Then you have this

Which I… And then this fucking thing

Which I… No. No! DO YOU SEE WHAT YOU ARE DOING WRONG HERE? “OH SO MAKE IT WIDER THEY’LL LOVE IT”

Ok… More sensible. It may not look it, but that can have two real size A8 pieces of paper in a text editor. MSWord, LO, whatever. Now THATS pretty good. Gaming? You have better FOV. Even if you can only go up to 95 in CSGO or whatever game its not all crushed and warped at the edges.

Go up, not sideways. To turn a monitor to get vertical space also looks very fucking stupid. Its a one or the other situation, whereas something like 5:4… Yeah I could use that either way and play CS IDC.

But I also want to bring up 4k… What the actual fuck is the point. I can see having a huge ass 50 inch panel in 4K so you can read all the notes for staff from across the hall through the conference room window but… “Gaming at glorious 4K” and going higher… No. Thats just a waste of time. “But what about video”

…Thats a credible argument. Thats fine with me. Hell if I can see a guy on a screen that looks like he is sitting in the room with me thats a fuck load better than whatever crushed pixels YT has for me. But thats the only valid argument I see for that… Well, unless you need 16 terminals on screen at once in stupid size font…

But is that really something you want?

In the end, I thought I was going to be very annoyed by having purchased a smaller res. And I was. For an hour. After an hour of use I decided that it was just a sensible screen res that makes sense. The hell am I going to do at 1200P? Oh boy two vivaldi windows at once!

Oop, day trading. You want a 72:9 super duper wide screen that wraps all the way around you in a circle so that you can read stock windows with 16 million pixels in a window (because you KNOW you need DEPTH in a text box)… Fuck it do it up.

But is that really something you want?

Totally want to get an ultra wide and stand it up straight on its side for text, umadbro?

Most things are 16:9, ergo more people will have these. They look great to me, just as I’m sure your stuff looks great to you.

This seems more like a “bashing on X because I have Y”.

I just woke up and its too early for this shit. Any amount of reason you are trying to make is lost when your tie it in with angry stream of conscienceless.

People just get what ever monitor looks best/fits their needs best, that’s all. Wide-ass monitors are needed because some people find them useful.

So you think they are ‘retarded’? Big deal. Why get all riled up over nothing? Were you shit-faced when you made this post?

For general productivity and web browsing, I find 3:2 to be the pretty perfect ratio for laptops. 4:3 is too square, and 16:9 is too wide.

Unfortunately, the only devices you can get with 3:2 displays are Chromebooks, the late Pixel laptop, or Surface devices. There aren’t currently any high(er) performance machines that let you take advantage of the extra real estate afforded by the larger vertical resolution.

For desktop monitors, where you have more than one window on the screen at a time, I prefer wider aspect ratios. You can’t beat having the horizontal resolution on displays larger than 27". It’s easier to look side to side than it is up and down.

Wait, I think I have a solution for you. You can thank me later.

1366x768 master race? It’s by far the most common resolution of people who fill out the Steam survey.

I put my panel on the left side because of the limited vertical pixels. Initially I hated the idea. Then I got a little netbook with a 1024x600 screen and you really can’t afford to lose a single pixel when it is only 600px tall. I put it on the left to avoid issues with going to click the scroll bar and hitting a right side panel button by mistake. I added an auto hiding panel in the center of the bottom as a launcher for my most common applications.

My guess would be that most people won’t like trying a different panel configuration because they are set in their ways like I was. Being ‘forced’ to try different setups for more than a few minutes or hours might give people some insight on ways to adapt their current layout to something that isn’t standard. It was probably a few weeks of occasional use and tweaking the layout before I found something I liked better than a top or bottom panel. Now I use this layout on all my machines.

I particularly like how my HTPC and laptop have the same 1366x768 resolution. I purposely ruled out 1920x1080 when buying my laptop. Having the same OS and same layout makes it very seamless to use either device. My desktop has a backup partition with a lot of larger files or files I don’t use regularly, but otherwise I keep /home folders mostly the same so it doesn’t feel much different. Even the percentage of view my TV takes up a few feet away vs the laptop maybe 18" away is very similar. I too had eye strain issues before getting glasses, and having both OSes tweaked to combat this along with the glasses has eliminated most eye strain problems.

I have one of those 16:10 monitors and it is kind of nice. I will be saddened in the future when all of the lower resolution and non wide screen monitors disappear. My eyesight is garbage and it honestly creeps me out watching live action stuff where things are way more detailed on a screen than they would be for me in real life.

I know no one else is going to relate to my specific situation, but I thought it fit in well with this thread. I do think it is a good idea to force yourself outside of your comfort zone and give different things a chance. Maybe that’s what I need to do with HD. By then HD will be all but completely abandoned and I can start over again with a higher resolution.

This seems more like a “bashing on X because I have Y”.

That’s basically every one of his threads. 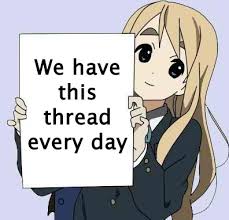 Have you actually tried ultrawide for productivity? Its pretty nice having 3 portrait windows open across the screen at one time.

I have I found it really annoying.

So just because you dont like it the entire market should change?

I just think its stupid. A lot of good useable screen res have just died into the ether to be replaced by 500:9 or whatever is coming next.

I’m not the only one with this opinion.

A lot of good useable screen res have just died into the ether to be replaced by 500:9 or whatever is coming next.

The reason those obscure resolutions and ratios are annoying to find is because every piece or content is in 16:9. These companies are not going to cater to that 5%. As for bigger and bigger screens, the reason is people are using their PC for productivity much more often, people remedy this by getting more monitors or getting a 21:9 monitor.

In my opinion, the 3:2 aspect ratio is superior to 16:9 in Mobile devices. Ranting about why 3:2 not being big is not going to make it any bigger.

I love it. But I’ve gotten to thinking… I am perfectly comfortable with this res. I honestly want more 1680X1050 screens because default size 12 font is perfect to read. I can set it to size 10 and its still fine…

But I also want to bring up 4k… What the actual fuck is the point. I can see having a huge ass 50 inch panel in 4K so you can read all the notes for staff from across the hall through the conference room window but… “Gaming at glorious 4K” and going higher… No. Thats just a waste of time. “But what about video”

I used a 40in 4k with i3 for the longest time to get stuff done. Admittedly, it damaged my vision, but that’s something I’ll live with.

I now use that 40in 4k to do music and video production. Having more screen real estate to keep VSTs up is nice considering I don’t have a lot of midi devices to work on.

So just because you dont like it the entire market should change?

Yep, I’m that important. If you don’t like it, maybe be more important than me?