If your GPUs are in the same IOMMU group after you have completed the section of this guide covering how to “Enable IOMMU in GRUB”, then, like me you have an older CPU (in my case an intel i7-4790K) where IOMMU support is hit and miss. Even though your CPU and motherboard support vt-d, the older CPUs can be hit and miss with how assign IOMMU groups are assigned. This situation may have improved from the Haswell refresh or 5th Gen-intel CPUs when DDR4 RAM became hardware requirements. I am not sure if AMD APU/CPUs have this issue, but this solution should work for AMD too.

So, you find that after enabling IOMMU your GPUs are in the same IOMMU group. Not to worry, you can still use GPU passthrough, you will just need to manually compile your kernel from source and apply the ACS patch. This is actually easier than it sounds at first.

To do compile your Linux kernel from source, you will first need to install a number of build dependencies

Next, download the ACS override patch that best matches the Linux kernel you want to install from:

Older release candidates can be downloaded from

Once downloaded extract the Linux kernel. I have put the commandline commands here but it is much easier to do these using “Files” also included.

Then go into the extracted folder

Right click on the extract folder and select “open in terminal”

Next drag and drop the acs override patch from the download folder into the terminal. Your final command should look something like this

Hit ENTER to apply the patch.

Ctrl+F and search for KVM.

Make sure it is checked.

For some fun search for logo and enable the boot logo uncheck the last two logos (16bit and black and white).

Now search for version and double click to change the version string to -acs-patch. Hit ENTER/return and click save in the top and close the window.

Now to compile your patched kernel: Still in the terminal where you applied the patch, type

If you have a multi-thread CPU with more than 4-cores you can change the -j4 to -j6 if you have 6-cores. The compile can take anything from 25mins to a couple of hours depending on your CPU’s speed.

If your build stops with an error about SSL keys, edit the config file manually with

Ctrl+W to search for CONFIG_SYSTEM_TRUSTED_KEYS and comment out the line, save and try to recompile again.

Once the acs patched kernel has been compiled you will find a number of deb packages in you Downloads folder or the folder one level up from the kernel source folder. You will only need the linux-image and linux-headers.

Now drag and drop the linux-image and linux-headers deb packages into the terminal.

Hit ENTER to install the packages.

Once the kernel is installed, you will now need to edit the grup to use the acs override. In the terminal type the following

and add following to the GRUB_CMDLINE_LINUX_DEFAULT line: 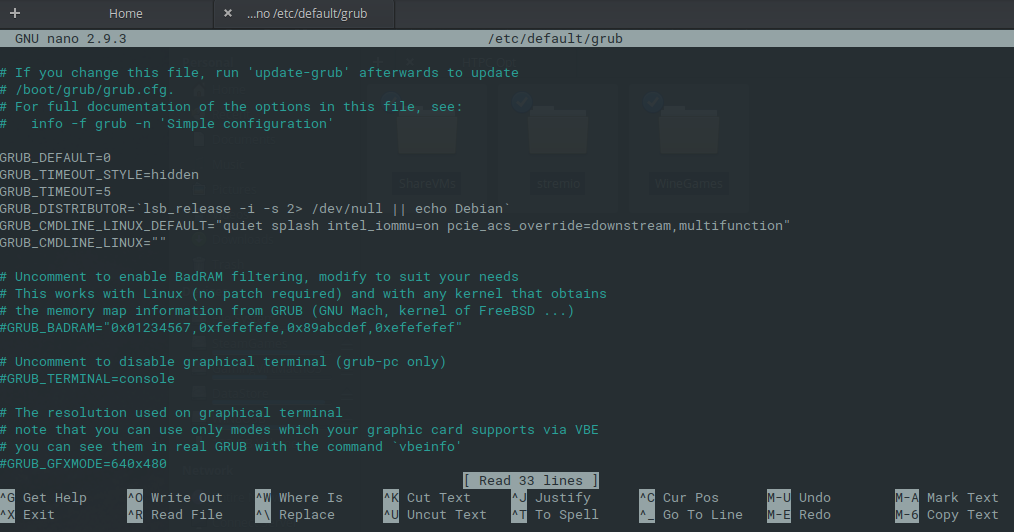 Just as a heads up:

The downstream call enables the asc override, and multifunction call forces all components or functions of a PCI device to be assigned to separate IOMMU. The multifunction call is needed if you are passing an Nvida GPU through to your VM. AMD GPUs tend to separate the VGA, Audio and other components of the GPU into separate IOMMU groups by default but with Nvidia they tend to be bunched together. For Pascal (i.e. GTX 10##) and older Nvidia cards this is not an issue for the VM, however with the Turing (i.e. RTX) GPUs the VGA, Audio, USB-C, and USB controller will all be under the same group if the “multifunction” call is not included in your grub default. As a precaution to prevent issues in or booting the VM, I would assign all 4 functions/device IDs of the RTX cards to the VFIO-PCI driver. The USB controller may still say it is using the xhci_hcd driver but it should pass straight though to the VM as a host PCI device. 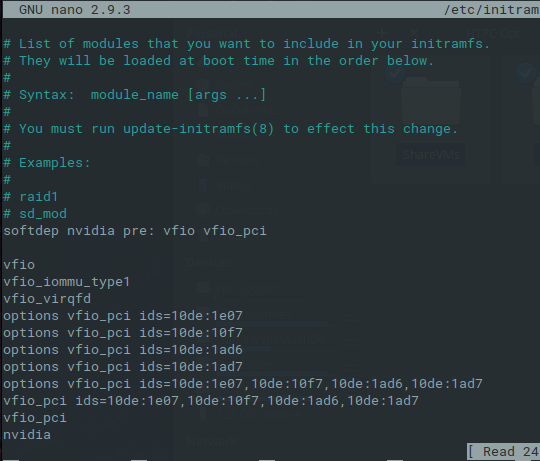 added link to original tutorial to make it easier for people to navigate through, awesome work

Thank you so much for this tutorial. I’ve got Windows installed and running, the Nvidia drivers are working, etc.

I’m wondering what your keyboard and mouse setup is, though. In order to setup Windows, I had to PCI passthrough my mouse and keyboard.

Of course, this doesn’t allow me to easily disconnect the two. There must be a better way, right? Are the normal mouse and keyboard in the devices panel supposed to work after Windows is installed?

You could get a kvm switch that allows you to use the same devices on both Linux and Windows at the flick of a switch.

There are probably good cheaper ones too that may better suite your setup.

In my case, where the VM is just for gaming and monitors have multiple video inputs with a relatively easy way to switch between input sources, it is just easier to have 2 cordless keyboards and mice (one for main use and one really cheap). So the switch seems like overkill.

Isn’t ElementaryOS 5 amazing? I am really in love with this OS. Great guide!

to be honest, i had to tweak it a lot. Single click to open folders/files just sucks, changed to typical double-click, then switched to dark theme, added minimize button back into UI and moved all header buttons to the right, but overlay im happy with it

Used my own tutorial at work while moving to linux, since i need Windows VM to run Photoshop + for testing as well i guess (web dev)

Runs fine, Windows VM has few BSODs, but whats weird that photoshop keeps freezing up from time to time, but that could be related to something else, cuz im loading files from SMB share from my linux host, so windows may be just derping connecting to that

i was thinking about this a lot, first tried just RDP into Windows VM, but quality+performance was poor even connecting to local VM, then had KVM in mind, but that would be too much work to keep switching between host/client all the time. Decided to just buy synergy instead, works fine

but it really depends, if your VM has dedicated monitor, kvm switch/synergy would be fine, if you have fake monitor plug, guess you could try setting up looking glass.

I decided to just dedicate one monitor, since i had one monitor just for photoshop when i was full Windows anyway

@elixir77 I thought about getting a KVM switch but instead I’m using a “soft switch”, essentially just run a script to disconnect / connect the moose and keyboard from the VM. There’s a little bit of delay but at the moment I have to physically swap the monitor connection (another cable is coming soon) between Mobo and GPU so it’s fine.

I can write up a little guide for that if anyone’s interested.

@wUFr yeah I’ve been planning on trying out synergy but it doesn’t support Wayland yet which is unfortunate. Luckily it’s not too difficult to switch back to X for the time being. I’ll probably use synergy when I get my new monitor.

One more thing, wanted to share these guides. Have some useful information for optimization.

also, decided to change title of this thread a bit, since all this should work on Ubuntu 18+ as well and removed “beta” since i managed to set this all up in fully released EOS 5

update on my setup

everything works fine, except storage, which i assume is VIRTIO driver issue in Windows 10 VM, sometimes it gets terrible read speeds or even BSODs… to be fair i may f-cked it myself, when i was trying to use memory balooning feature, which seemed broken. It would still use all the ram in host OS and Windows VM ram would still show 16GB with only difference it being almost always full - which i assume was some driver issue… idk

wasnt it because of gpu passthrough you cannot use dynamic memory at the same time? i think it was the same on hyper-v but not sure, cant remember…
virtio drivers are latest?

idk. Drivers should be latest, but i dont even remember, where i pulled them from by now. I think i had to dig them from some redhat site

ok, tried these settings and it seems to work way better now 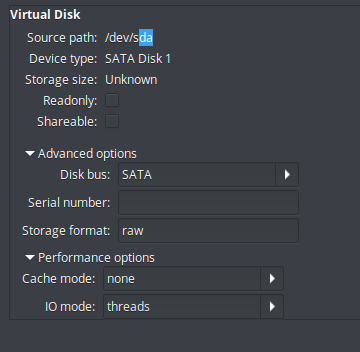 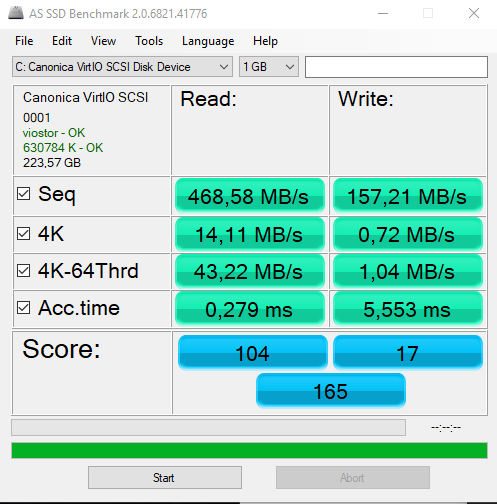 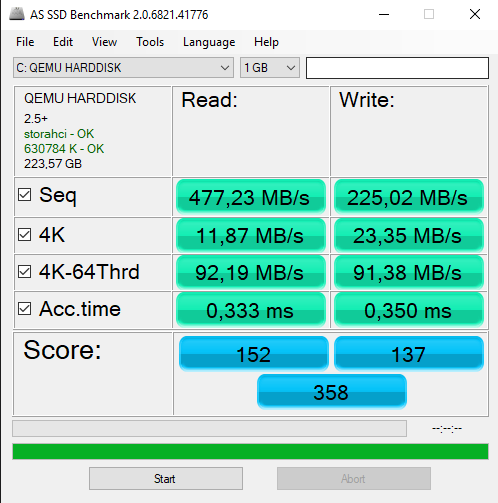 I followed this guide but only the audio device seems to have the correct kernel driver identified.

weird, id say check all configs again, if you put in both PCI-E IDs and without typos then see

note, if you’re trying to passthrough USB controller (PCI-E card in my case), check if its not in same group as other stuff.

… so many hours raging why it does not work, lol. Turned out 1x slot is in same IOMMU group as my network cards on board itself…

Guide updated with link to “GPUs with identical ID” how-to

also one non-related “isssue” (may help someone).

If you have GPUs with same IDs and connect new monitor to the VM passed GPU, you may need to reboot WHOLE pc for it to detect correctly.

got new 4K monitor at work for my windows VM and was pretty scared its not working properly or cable is bad, but it simply needed rig reboot to get detected properly. My guess is, its due the way GPU is passed when having same ID as host GPU