Since it's the "in" thing right now I figured I'd share the current progress on my dual xeon build, along with the problems I've been encountering along the way and hopefully the solutions.

Most of the parts were bought used or were things I had laying around from past builds and RMAs.

I will be using this PC mainly for programing projects, 3D print designing, and as a home theater/gaming PC for my projector setup. My main system is and X99, so this is a secondary system for the most part.

The first challenge was fitting the motherboard into the case. The Phanteks was the one of the only cases I could find that officially supported a SSI EEB motherboard, and the price was right so it was an obvious choice. 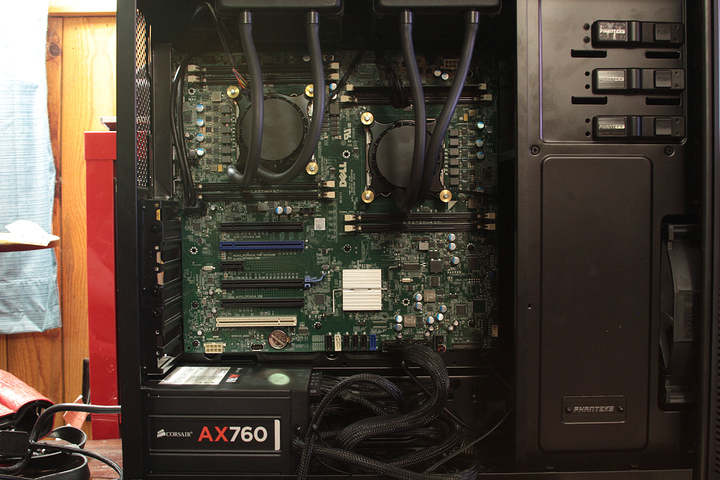 IMG_1883edit.jpg2851x1901 659 KB
All of the standoffs had to be drilled and tapped, and the top PCI slot had to be dremeled out to accommodate for the I/O sticking out beyond the board. I put an old graphics card on the board while marking where the holes had to go to ensure that the pci slots would line up with the case properly. A support bracket for the hard drive cage also had to be removed, but the drive cages can still be used no problem. 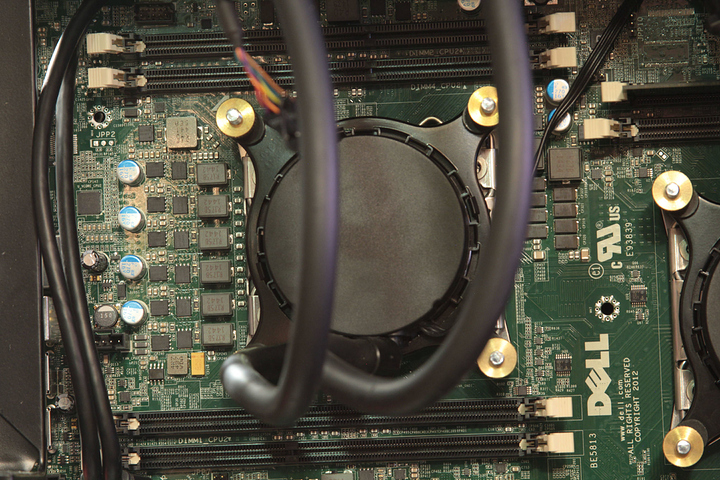 IMG_1884edit.jpg2280x1520 599 KB
The next problem was mounting the coolers to the board. The Dell board doesn't have the threaded inserts for the standard 2011 mounting. I solved this by using some M10x1.5" bolts with rubber washers running through the back of the board, then I got some knurled brass thumb screws to help dress it up a little. 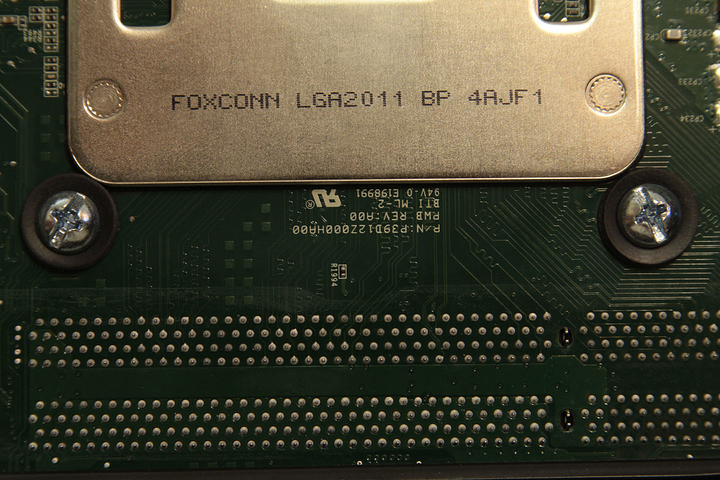 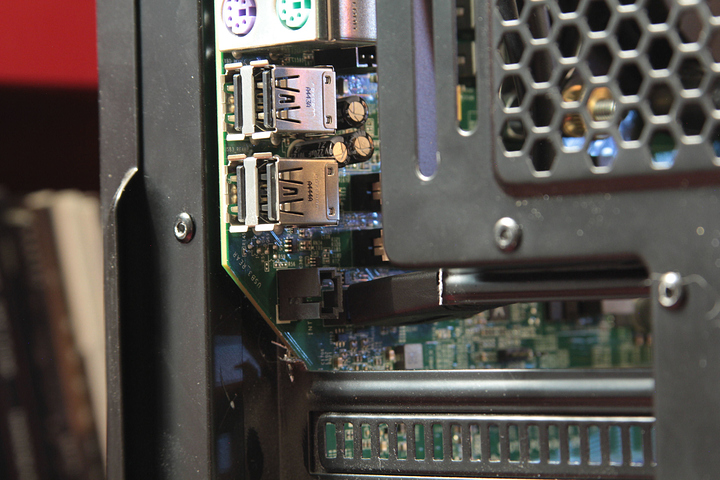 IMG_1888edit.jpg2851x1901 518 KB
Where I had to cut out one of the PCI slots to fit the I/O. It turned out better that I was expecting with the ports not sticking out past the back of the case. I have plans to 3D print an I/O shield that will also cover the open slot. 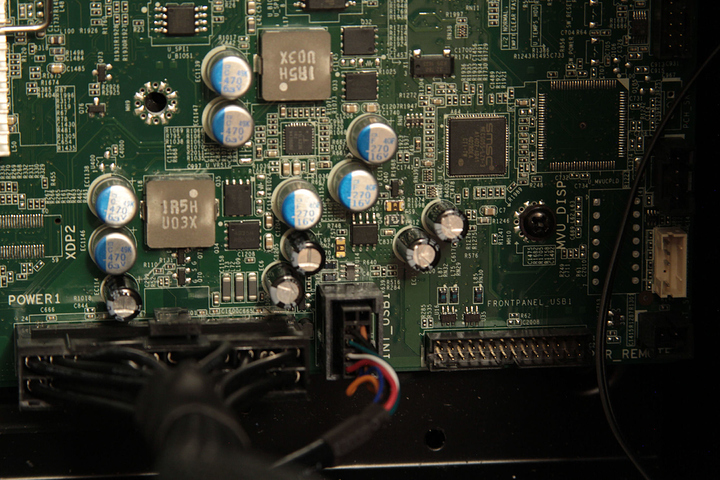 IMG_1886edit.jpg2280x1520 491 KB
The current problem I am addressing is figuring out what pins are for the power switch, I tried jumping various combinations of pins hoping something would work to no avail. So now I have ordered a front panel from a Dell T5610 so that I can hopefully decipher the pinout, or just modify it to work with the Phanteks case. Along with this I have ordered an adapter to go from Dell's proprietary 5-pin fan plug to a standard 4-pin, and thanks to the Phanteks case including a fan hub I should only need one adapter to let me power all of the fans, and the pumps.

I will update the thread as the parts I've ordered come in, I'm still waiting on the ram to get here from China (though I got a 4GB ecc stick to use for testing in case it takes a while). Hopefully I will be able to at least get the system booted when the front panel I/O comes in, and I plan to make a pinout for the header for anyone that may want to use this board in the future.

Thanks for looking, and if anyone has more insight on the power switch wiring please chime in.

Here is the pinout for the 24-pin. 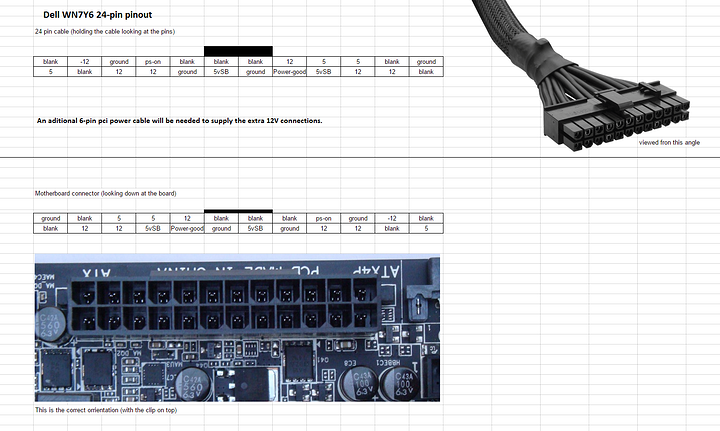 pinout.png1497x897 560 KB
This mod requires the tools to remove atx pins, and an additional 6-pin pci power connector will need to be used to supply the extra 12V connections. At this point I feel it necessary to add that you make these modifications at your own risk! I assume no responsibility for your fried motherboard or other subsequent damage! This mod is not for the faint of heart. 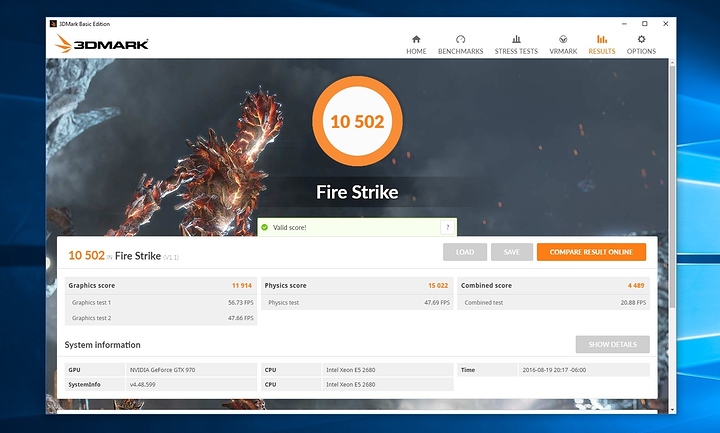 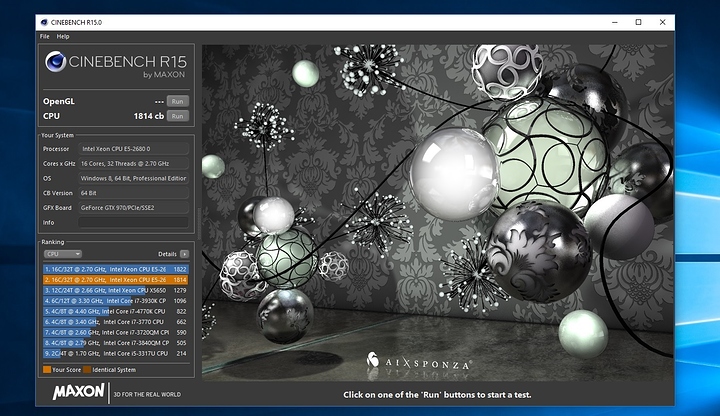 Made a ton of progress today. Turns out the 24 pin is not standard at all (shout out to Dell for some great circuit protection, as plugging a standard 24 pin in results in 12V going places it shouldn't). I am working on a full writeup on how to properly make the 24 pin cable that I should have up tomorrow. I've also found that if you plan to use this motherboard it is a must to also buy the front panel I/O from the T5600, it is nearly impossible to figure out what pins do what. Link to said part: Front panel I/O. After fighting with the 24 pin all day I was finally able to boot the system and install Windows, but now one of my coolers is no good :/

Thanks for the info!! I've just got this same motherboard like a week ago , still don't have the front panel (had no idea it was necessary) wondering if I can just use the remote pwr jumper until I get one, how did you found the pin out for the
PSU connector? just trying to double check before I modify my power supply... the CPU connectors need no modification right? hope you don't mind all the questions thanks in advance.

Well bought the front panel (thanks for the link) will wait a bit to be sure of the psu pin out.
what was the problem with your cooler?

I found this video, and spent a day translating and and going over it several times. As far as starting without the front panel, I had no luck at all. As far as I can tell the motherboard uses some sort of standby power that runs through the switch and then the motherboard itself tells everything else to turn on, if that makes sense.

For the 24-pin pin out I went over my diagram a hundred times before posting it, but I recommend you go through it yourself and check it with a multimeter. The cpu connectors were standard and didn't need any modification.

The cooler was just a bad unit. I bought it used so it was a gamble, but I was able to just get a Corsair H55 and swap the top cover (corsair is just a re-badged astek) so it matches the other one. Now that both coolers are good the temps have never gone over 50C in any stress test.

Thanks!!! We are half way on that check too!
I assume so far so good with your build right?
What went wrong with your Cooler?
Will do a double and triple check, front panel must be here next week...

Edited my previous reply for the cooler issue.

Im posting from the system right now. Getting ready to unhook it so I can take some glamor shots, and show how my 3d printed front panel and I/O shield turned out. I'll also post some benchmarks.

Something is off on your build. I get almost 200 points more in Cinebench R15 with dual 2670s.

The cpus are not turboing at all, just pegged at 2.7Ghz for the whole test. I'm not sure if it's a motherboard thing that can be changed or what. Just something to look into, might just be a downfall of using this motherboard...

Edit: now that I think about it I haven't downloaded any of the drivers for the motherboard. I'll try that to see if it makes a difference.

Well just powered it everything seems ok But I get this panel :/

Also the front panel just arrived and only has the usb cable :(
Any chance you can share the pinouts for the panel cable, I guess it is a 1-1 from the panel to the motherboard but
if you can check your cable would be great.

Solved... Used a number from a photo on ebay and option 3...
Still not using the front panel no need for it so far
BTW Cinebench is reporting a little bit above 1900 for CPU
and I´m on 2670...

The board might drag it down a little. I get 2000 points on average on both of my systems.

Alright, after updating the bios and all of the drivers and reloading the default bios setting I am now getting the scores I would expect. The cores turbo up to 3.5 Ghz in normal operations, and all 32 were running at 3.15 Ghz during the Cinebench test.... Sweet sweet relief that it is finally working right!

Check the pins which the power button connects to, short them with ie a key

Yes thats what i need. Since i dont have the front panel and cable i need to know what pins to use to start it. Thanks

Hello, there is a pwr_remote jumper next to the 40 pin connector on the mb. If i am correct this should tourn in on and off ? Also, is the usb 3 header on the mb standart ?

if the connector has 20 pins then yes.