Do I need to replace my CPU?

Hello, so I've been throwing money at my PC and it seems no matter what I do, I just seem to have issues. I've upgraded/replaced parts and the only thing that I haven't replaced was my CPU, SSD, and HDD I recently acquired a noctua cooler its the Noctua NH-D14. I started of with an x61, but then just stopped working and the replacements that they sent me didn't work either. then I bought an EVO and that was nice but I always seemed to be around 40c on idle with no load. I have this big CPU cooler and a new case which I don't really like, but I did put about 6fans 4 being 120mm and 2 being 140mm. Just being on the desktop I get 30c on average but sometimes it just up and down to 48c and when gaming it almost reaches 67c, web browsing reaches 60c average on 50c. I have an msi gaming 6 mobo, has my CPU become defective? because I have little to no load on it and its still stock, I've never even OC it.

Firstly what CPU do you have? How long have you had it?

Are you sure no BIOS changes have been made?

Is there some phantom process sucking CPU cycles?

Did you install the cooler correctly with good quality thermal compound applied in the correct fashion?

It's very rare for CPUs to be defective. While it is true that the TIM between the die and the IHS could somehow become defective idk if I've ever heard that happen.

Not just the CPU... Tell us the entire system... What is the case, what is the power supply, motherboard, everything...
What is the ambient temperature?

oh my mistake, I forgot to put it in. I have an i7 4790k, I have never even meddled with the bios actually, the only thing I ever did was go into the bios to max fan speeds, but then I reverted it them to default. I know installed the cooler right, because I followed the instructions. I don't know how to check for a phantom process other than checking task manager and reading if anything is, but nothing ever shows that it is.

Whats the air pressure of the case negative positive neutral ?

Have a look in BIOS and see what the voltage is for the Cpu. Some boards default to very, very unreasonably high voltage for the sake of compatibility to guarantee all chips will work. Also keep an eye on task manager, sort by Cpu and watch for tasks that are eating up cycles unnecessarily.

If you have an i7

what would be the appropriate voltage for it?

Your temperatures dont really look all that abnormal to me.
Atleast not for aircooling. 4790K has a 4.4GHz boost clock.

your temps are completely fine

P.S. was running even lower when I wasn't using 1866MHz RAM

@CounterfeitTacos When you booted up the system do your things but keep and eye on CPUz and see if the CPU voltage scales accordingly to the CPU load and frequencies. Maybe you're experiencing temperatures like this because the motherboard is putting a bit too much voltage into the CPU.
Also do you have an exhaust fan mounted on the case right behind the cooler? What case are you using and what are the position of the fans?

Get Arctic MX2 or MX4 and replace your thermal paste... It had quite a nice effect on my system...

P.S. was running even lower when I wasn't using 1866MHz RAM

Well maybe he could get a littlebit better temps,
if he re-mounts the cooler with a better thermalpaste application.
But still his temperatures aren´t really out of spec.

Sure, those temps are not out of specs and far from the tjmax but I find them, at least, unusual for the setup he's using as far as I know. I don't want to allarm anyone.

highly doubt your CPU is the bottle neck. You're about as golden as you get, give and take 5% , and you wont find a better cpu with bang for your bucks atleast for a while you could invest in a newer generation of the intel cash cow, but i wouldn't advice it honestly.
Are we talking that ~random youtube video doesn' t make your monitor explode from "Cant handle the FPS", or are we talking the youtube videos, and ma games runz at 2 fps?
Your temperature seems reasonable, And since you're running a 4 core i guess you can go full Rtard on all cores without much problems.
My question is, do you need 200fps in 4k DOOM?. or are you satisfied just chilling with some 1080p gaming, compressing a video every now and then even if it takes ~60 minutes.
Else im affraid it is going to be alot more expensive then what an intel desktop can give you. 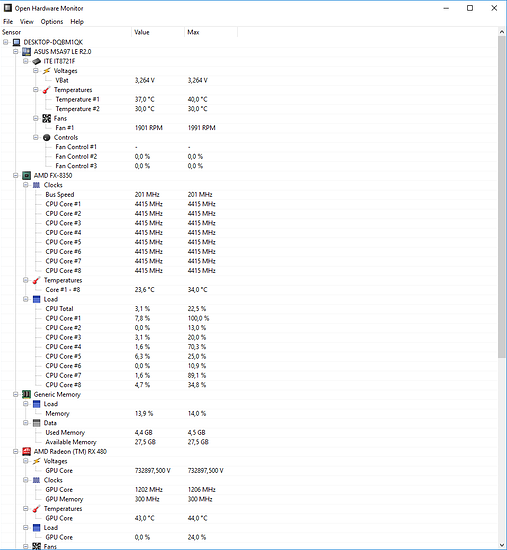 Capture.PNG960x1040 41.4 KB
This is me just listening to some youtube, and writing this.
albeit im running AMD on this desktop.
next page →