Hey Level1Techs, long time first time, thought I start logging some of my development on this little project. Not really sure where its going, but hoping I’ll find out along the way.

I am imagining a platformer type game where the player throws there gun in order to alter gameplay.

He’s some of the work after a few hours, a little platforming with some example of shooting and slow motion.

Are you using something like Unity, UE, Gadot, or is this all from scratch?

Wow, this is quite impressive, considering “a few hours”

Knowing my skill it’d take a few hours to get my environment to successfully build.

Thanks! Thankfully, I’ve been working with unity on a professional for more than 6 years now. With that said though, one of its strong points, is installing and getting ready to go out of the box. You should try it sometime!

Hey all, little update! First off not sure if I should leave this badass rotation bug in lol

Not 100% sure what’s causing it, guessing it has something to do with gimbal lock, but… For now it looks kind of neat so I’ll just leave it as is.

On a topic of bugs, here’s another neat one that happened while editing, accidentally started calling an event every frame lol

Lastly, I’ve got an art friend helping me out with a thing or two, and I’ve had him give me a little mock up. We think it would be cool if it went kind of Western themed. 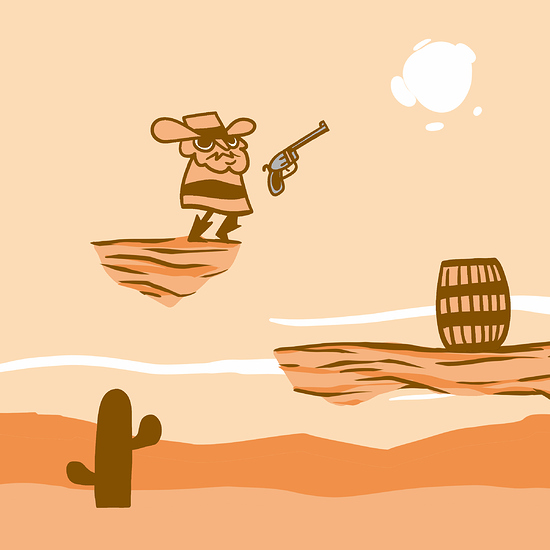 Would rather fix the bug, then figure out how to make it into a feature.

We think it would be cool if it went kind of Western themed.

Hmmm. I would definitely fix it. If you think it’s cool later, you can write it back in.

It is a badass and I would keep it in…
I would also try and find out why and how it’s happening, so it can be exploited…

The western and that style looks good.

I thought that spinning gun was a feature in the initial post, like a western thing where they would spin the gun before holstering it. So that ties in nicely, that said I do agree with everyone else, figure out why it is happening and then make it a feature just so nothing unintended or at least detrimentalcomes of it later.

Got some art in! I also added some “health” to objects. However, I don’t really see objects being destructible or anything its more of just a distraction and a catalyst to enemies having health.

Gun rotation is still borked, but lives been busy and this is just me derping around anyway

nice! loving it so far

As someone whos never used this engine (or any modern engine) can you give me some indight into what the process was like to get started with your game? Thats probably a pretty broad question

Sure, going to need a little more clarification tho, are you talking about from a game design standpoint or a “setting up the Unity Engine/Dev environment” standpoint?

Game design would be interesting to hear about as you progress with your game certainly, but i was just curious about the general setup from a tooling perspective.

Well this project is dead, and has been for some time, although I tried to turn it into a runner lol, here’s some final vids:

That’s a shame I like the style and idea.

Hopefully it was a good learning project.

oh that’s sad it was coming along so nice