I had to set Crysis' console to unrestricted mode first... pff. Then i disabled autosaves. It actually improves the performance issues i've been having. And they're annoying. I won't have 100+ saves that way.

Why is it not saving my settings!? I disable autosaves and whenever i load up the game again they're enabled again! WTF!?

Been quite some time since I played Crysis, but my guess is that it's in the configuration file. I'm not sure if they were in the game directory or in your Documents/My Games directory, but there are quite a few options there.

What kind of performance issues are you having though? I didn't really have any (except in Warhead cause that optimisation was non-existent apparently).

Didn't have any issues with auto-save either.

Apparently you need to make a System.cfg file in your install directory. I did that and added the command in there and it's not working. And that' also suck a FUCKING great way of doing it, too. Fuck Crytek. They officially suck dix n cox. Un fucking believable. Because that's awesome, y'know? You can open up the console and type in commands. Too bad they dont get fucking saved.

I hope someone who knows the game inside and out can help me.

That's exactly the problem, it's an old ass game. Some game engines just can't handle really high frame rate and they end up stuttering, forcing vysnc fixes this issue. If that doesn't work, try tweaking the Flip Queue Size or Max Pre-Rendered Frames under Nvidia Inspector (no more than 3 frames). edit: Found this. On AMD there's a Tessellation Mode settings which can limit the amount of tessellation, perhaps this could help. I don't know the equivalent on Nvidia. Also found this: [image] Essentially, the article says that during Crysis 1, when Crytek was still only on PC, they didn't give much thought on proper resource management due to the available hardware for PC compared to consoles at that time. It's only when they started development for consoles that they become more conscious of optimizations. 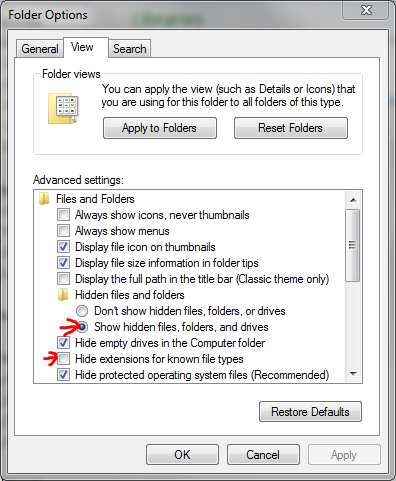 Make sure you have both these settings turned ON first to double check it is indeed "System.cfg" and not a "System.cfg.txt". It could just be a regular .txt file but you don't know because the file extension (eg.: .exe, .jpg, etc...) is hidden.

I made a new txt document and saved it with a .cfg extension. It now shows as a CFG File. So i'm guessing it's ok. I have the game installed in Origin. Which is on my Caviar Blue. It's in Program Files x86 - Origin Games - Crysis. That's where i put the System.cfg, There's a Game.log file there. I think it's the right place. Right now, i can only guess. Unless there's someone who's done this before with the game.

Crytek are starting to sound like lazy cunts. Console needs special attention to execute commands and shit... this is dumb.

The file is not supposed to be in the install folder... that's why I said your documents folder:

And it should already exist, which I kind of said

It might be one of the commands that cannot be overwritten in that file, you may have to use the autoexec.cfg or some other file. Maybe command-line arguments (in Windows) work too.

You have to go into the Game folder. From there the Config folder. Then you have to make the System.cfg in there. Added the g_enableAutosave=0 line and it worked.

For anyone who may need the solution, there it is.