Hello I am having issues when doing basic internet related things on my pc. When opening firefox(6 home tab sites) my computer starts to chug and slow down heavily. The mouse starts to teleport and gets very laggy. I opened up task manager and it seems that my cpu shoots up to 75-100% usage at 3.89 ghz. It also slows down heavily during a game update. I was wondering if it is time for an upgrade or if there is anything I can do to get better performance out of my cpu/pc. It is still at stock speeds(I don’t know anything about overclocking). Not running many programs at all really when the issue occurs. Thank you for your advice and help!

Sounds like something is wrong with the OS. A 4770k is still very relevent in todays hardware.

try reinstalling(uninstalling, then installing again) gpu drivers.
Most browsers now a days have some sort 3D acceleration going on even on basic web pages.
If that doesn’t work, id try reinstalling your OS, drivers etc etc. And offcourse backup your important files.
Your hardware setup should keep you going for a while yet, it seems quite descent, and more then capable.
Over clocking is not going to help you, it is a software problem, OC’ing will give you maybe 10-15% extra on the cpu, but it seems like your cpu just ramps to max regardless.

Yeah, a 4770K is definitely still a good CPU as @Adubs said.

Maybe boot a live USB of some common Linux distro and try that? My uneducated guess would be that if the CPU doesn’t bog down in a different OS it would most likely mean that it is software related in the original OS.

At which point reinstall drivers and/or the software causing issue. If that doesn’t work reinstall the OS.

Might try a reinstall of the browser before you reinstall the os, or gpu driver. Also the age old question of did you try turning it off and on again.

While I certainly agree with everyone here that reinstalling the OS is not the first thing to try, its certainly a lot faster and easier than it used to be with windows 10. In pc settings > recovery > reset this PC > keep files. Sometimes it makes sense as opposed to spending hours trying to track down a solution to a vague problem.

I’ve also seen issues in windows 10 where when you load something for the first time after a fresh boot it can do things like this but the second time its very fast. I believe it has to do with the caching features to utilize as much ram as possible on things that you are commonly using.

thank you everyone for the quick reply’s! I will uninstall and reinstall firefox and see how it does, This issue has been going on for quite some time now and its starting to make me angry because as you all mentioned the cpu should still be very good. if the reinstall doesn’t work for firefox ill reinstall windows 10

I have actually never been able to get this feature to work in windows 10. I think it worked correctly for me one time in windows 8.

Works fine for me every time. The only time I could see it not working is if there was disk corruption or partition issues.

could it be the ssd(windows 10 install location)?

seems like its a problem with windows. fresh install of firefox did not solve the issue.

could it be the ssd(windows 10 location)? 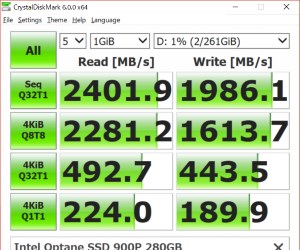 Boot a linux stick and run firefox there. If it runs fast again it is down to software or the drive the software is sitting on.

sounds like it’s time for a fresh reinstall of wandows. hardware still great. don’t upgrade unless something is really RIP.

I’m a newb with this stuff. That said I had the same symptoms on my computer and it was malware. Have you done a thorough virus scan? 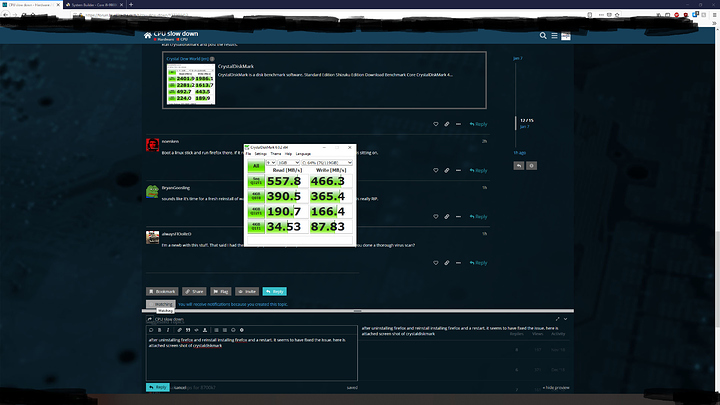 thank you for all the help! firefox seems to be running much better now.

@Adubs seems like i am running into the same issue again. I think i may need to reinstall windows 10

Boot a linux stick and run firefox there. If it runs fast again it is down to software or the drive the software is sitting on.